It has been a busy last few weeks with a late Summer allowing me to bag Sgurr a Ghreadaidh , Sgurr a Madhaidh and Liathaich in early September in glorious conditions which left me only three summits to crack this Munro malarky ! .

A last good day / wee window at the end of a weeks high pressure saw Sunday looking good for Luinne Bheinn and Meall Bhuidhe in Cnòideart ,so i packed the overnighter and a quick shift up to Mallaig for the Sunday ferry at 10.30am.

Before i go on ...... can you knock this "loony bin" nonsense on the head ? . The pronunciation is "Luinya Bheinn" with an almost silent "y" and the emphasis on the last word , Bheinn ..... pronounced " Ven" with a long "e". It bears no resemblence to "loony bin" , so do me a favour and show the indigenous language some respect please , if you can't pronounce , do your best , but don't demean the Gaelic tongue with bastardised and invariably poor english ...moran taing . We landed and headed off immediately , i have spent quite a few drunken visits to the Old Forge over the years on various ceilidh cruises so this time gave her a miss , anyway i hear the current owner is no much good ....

Off up past Tòrr a Bhalbhain with its "memorial" to the foreign carpetbagger / nazi british fascist , never went up but i sure hope any reference to him has been removed .... good views to our first target Meall Bhuidhe , ended up cutting across the bog-fluich and the face of the Druim to catch the path just past the bòthan . 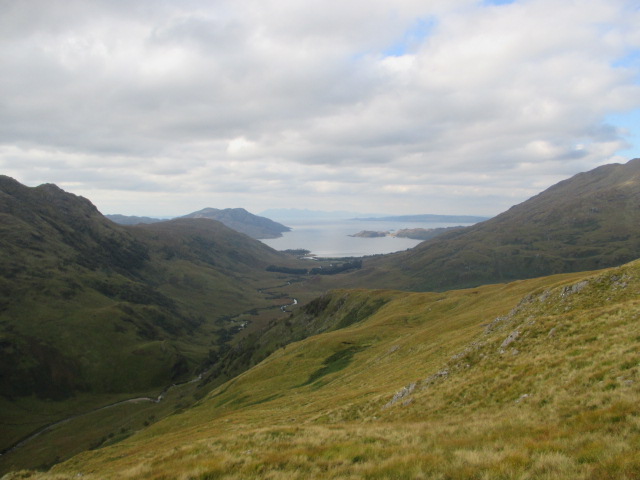 'Se latha breagha a bha ann .... a grand day very Autumnal and i was already mulling over where to pitch for the night , forecast was for increasing winds SE so already i was aiming to reach the Mam Barrisdale for about seven o clock . Sweated my way onto the summit with superb views all round but Labhar Bheinn was always catching the eye ..... àlainn Spent 20 mins and then pushed on it was only 2.15pm and having left at 11am ,no bad going i now thought i would definetly make it onto the Mam before dark .

A steep and rough trauchle over to Luinne Bheinn and the stags were fair roaring ,some grand colors on show with browns and yellows looking very like Autumn Filled up with water here and took the steep climb onto the East top ,not as heavy a climb as i reckoned it to be and great viewpoint Had a well earned rest for half an hour as time now on my side was only 4.15pm Now decision time ..where to camp !!!!! in the end i decided to drop down to the Mam Barrisdale and take it from there ,great glow on the hills with the sun going down in the West ,no spectacular but atmospheric We made it down to the Mam in no time at all and pressed on toward the Loch an Dubh Lochain by the time we reached there.... i decided to walk a bit further ..... and a bit further , then decided that i'd make for the traigh fada (long beach) near Inverie.

Arrived at the shore for around 8.30pm and struck camp then a dram with dinner before turning in for the night . A great wee spot ,only us and the stags ,geese , lapping waves and a cool wind meant we slept all night with the tent fly zip opened to the stars .

Up at seven in the morning ..... lovely sunrise sky in the dawn light 'S cùimhne leam eachdraidh an àite .... i know the history of this place and i will remember that story . I remember the history of this place

So ..sin agad e , one left and its Sgurr Mor on Loch Cuaich ,handy for me as its only an hours drive ....need to pick a route and a good day for the finale

That looked brilliant, there is no finer place when the weather is good

Well done. Great pictures and a great place I camped near Meall Bhuidhe a few years ago. A five star wild camp.
Ive always wondered what the gaelic for diesel was, i wish i had known that when i was in Harris last year

. Good luck and hope you get a good day for your last one.

And then there was one

An cu has had a run in with your sheers eh?

I wish you all the best with your final Munro Colla

well done colla nearly there, left a guid 1 to the end.

Nice one - good weather for these two makes all the difference

. Despite a pleasant September, I have mostly picked the wrong days to be out on the hill.

I had heard similar about the new pub owner, but it seemed OK to me. Mind you, I don't have any local connections or previous knowledge to judge it against, so not the best person to say anything.

Oh well done - any ideas on what you are going to spend your voucher on?

What a beautiful place when the weather's like that! Great report and great pics

It's looking at places like this that have made me decide I'd rather do ones like that multiple times than trudge up less characterful hills; so I guess I'll never get to a point where I'm anywhere near completion.

. Best of luck for your final Munro.

Collaciotach wrote:Before i go on ...... can you knock this "loony bin" nonsense on the head ? . The pronunciation is "Luinya Bheinn" with an almost silent "y" and the emphasis on the last word , Bheinn ..... pronounced " Ven" with a long "e". It bears no resemblence to "loony bin" , so do me a favour and show the indigenous language some respect, please , if you can't pronounce , do your best , but don't demean the Gaelic tongue with bastardised and invariably poor english ...moran taing .

Oh sorry, I can't resist... from the construction of this paragraph, I would be very careful about dishing out any advice related to language

Well said re pronounciation. And good luck for the big peak.

A1 Colla..no inversions this outing? liked the image of an Cu on the edge...one more , hope you get a cracking day for it..

Finishing in some style young fella, awesome yet again

You'll love the 15k walk out from the last munro, plenty of time to reflect on an incredible journey.

Best wishes for the compleation