Tinto - beauty above the valley haze

Tinto - beauty above the valley haze


September this year brought such a lot of lovely weather! With late shifts at work to get back to in the afternoon, we decided to make the most of a sunny morning and climb Tinto - obviously a popular hill, but one we hadn't gotten round to yet.


tinto.gpx Open full screen  NB: Walkhighlands is not responsible for the accuracy of gpx files in users posts

Thick fog covered Glasgow, but blue sky started to break through around Motherwell, and by the time we arrived at the car park, Tinto was basking in early sunshine. The temperature was only 7C but already felt warmer as we set off, dew covering every spider's web for miles around. With a very gentle start to the clear path you can hardly go wrong: Beyond the earthworks of a fort the path began to steepen, traversing around Totherin Hill: Once over the next crest, most of the route can be seen ahead. I'd be hard pushed to name a wider path in Scotland Possible detour out to Totherin Hill: The path soon forked, with the western (right) branch traversing bare slopes above Maurice's Cleuch. This looked the most interesting route, with a nice open feel, so we opted for this route for the ascent: The views this morning were absolutely superb - probably the best we've ever had in southern Scotland. Not far to the top: After this the paths rejoined for the final steep section before the summit. The path here, and for a few other sections, has loose gravel underfoot. This makes the steeper parts a bit of a slog, and the path grows ever-wider as people avoid the gravel by walking at the grassy path edges. In a few more decades it'll be wider than the M8...

At the top we explored the huge summit cairn, pleased that somehow we had it all to ourselves... before discovering a man on the other side erecting a huge aerial for something or other. As for the views... 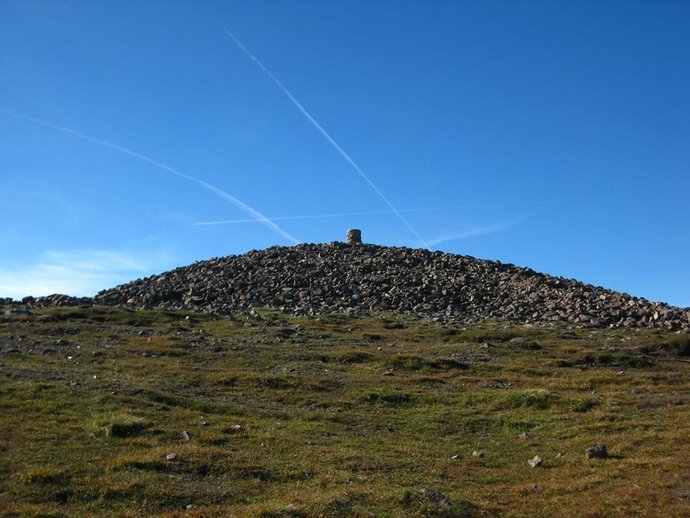 It took less than 45 minutes to get back down to the car park again, and before we knew it we were sitting in a pub in Carluke for lunch. Touristy Tinto... unexpectedly brilliant! Re: Tinto - beauty above the valley haze

Now there's a hill I can't believe I've never been up! I must go there soon as it looks a beauty. What superb weather you had for it - fabulous views well photographed. Thanks for posting.