A slightly later start than normal (9am) had Brad and I heading up the right hand valley of the three sisters with the clag not too far above us.

We left the buses in the car park and were soon on the steep pull up Coire Nan Lochan. 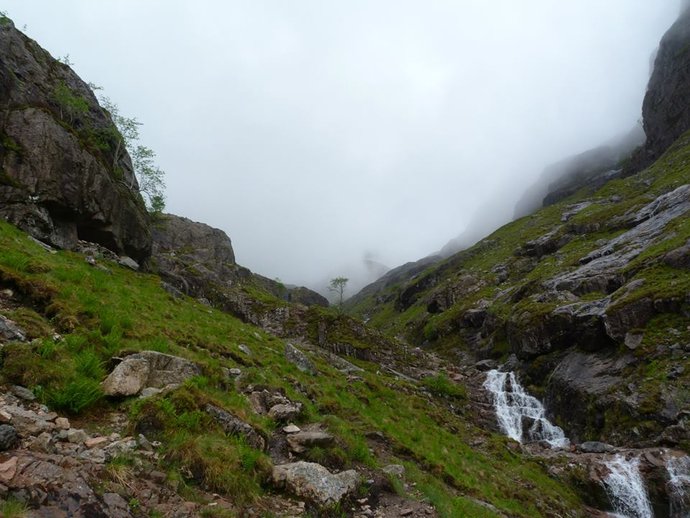 At about 700m we headed North up under the buttresses. The cloud was moving up and down off the summit as we munched our sandwiches. As we soon cooled off we headed off up along the edge of the buttresses which looked intimidating and infinite with the clag below. We made the top Stob Coire Nan Lochan and got our first views of an impenetrable looking Bidean Nam Ban. We were soon on the scramble which quickly got us up to the top. We were now just below the top of the clag and could see the sun through it. A couple of minuted later and the cloud was breaking on the ridge to Stob Coire Sgreamhach. The ridge was straight forward but the grass was quite slippy. As we headed past Bealach Dearg we looked down wondering if it would be the best route down due to the steepness and the 400m long snow patch which walkers below were approaching and then turning away. But anyway we still needed to get up Stob Coire Sgreamhach which was soon achieved. At this point the cloud lifted giving us great 360 views. After soaking in the views it was back to the snow path decision. Fortune favors the bold so snow patch it was. Nothing that couldn't be solved with a good bum slide. At the bottom of the snow patch we bumped into a large walking group on an outing so plenty of company down the not so lost valley. All too soon we popped out like minor celebrities to bus loads of photographers.

Next stop was a venison burger with black pudding burger at the good food cafe before the drive home.