Taking aim at Beinn a' Ghlo

Taking aim at Beinn a' Ghlo

Last summer, my partner and I moved from Aberdeen to Glasgow, thereby shifting our "local" hills from the Cairngorms to the West Highlands. Just over a year later, we were back walking in the east - repelled by a forecast for murk and cloud in the west, and the possibility of sunshine for the 'gorms. Stalking queries answered by a usefully clear 8am hill phone message update from the estate owners just as we were leaving, today's target was Beinn a' Ghlo. As we later found out, the mountain's 19 surrounding corries were popular targets for stalkers that day too...


beinn-a-ghlo.gpx Open full screen  NB: Walkhighlands is not responsible for the accuracy of gpx files in users posts

Empty roads meant we made good progress up the M80/A9, but the car park was already filling up at the start - evidently we wouldn't be alone today. The roaring of stags echoed around the hills as we set out along the track. We seemed to be right on the boundary between dull and bright weather. Carn Liath, and the path up it, was in plain sight ahead: After about a mile on the track, a path led off left by a hut, with a couple of tricky, boggy creeks to leap across before the path dried out again, heading upwards alongside grouse butts. Stopping for a snack, we paused to take in the views and realised just how busy it was - as well as a couple of groups above us, about fix or six further groups of walkers were spaced evenly back along the path and track behind us. Unusual for the quiet Cairngorms... maybe everybody else pushed east by the weather forecast too? Now ascending through heather, the path became loose and gravelly as it steepened, zig-zags only slightly helping. 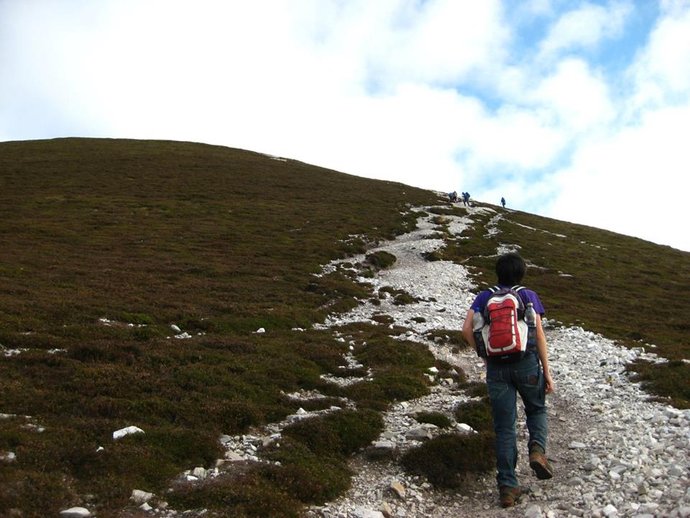 After what seemed like a long time a large cairn was reached - this isn't the summit, but it's easy going beyond. Any weariness vanished immediately on reaching the congested summit, as the ridge towards the second Munro was revealed. The scale of the whole range was hugely impressive, Carn nan Gabhar at the far end looking a long way away. The ridge ahead looking very enticing, but we waited for a few minutes for all the other groups of walkers to leave. Beyond here, everyone was fairly well dispersed and the day was much quieter. View from Beinn Mhaol (this summit can be bypassed on the left, but it's worth visiting anyway): This was all brilliant ridge walking, albeit now surrounded by gunshots, but it had to come to an end eventually... the ascent to Braigh Coire Chruinn-bhalgain next: Pattern on rock near the summit: Not much to say about Braigh Coire Chruinn-bhalgain, but the ascent to and descent from it was straightforward. Looking back to the summit: 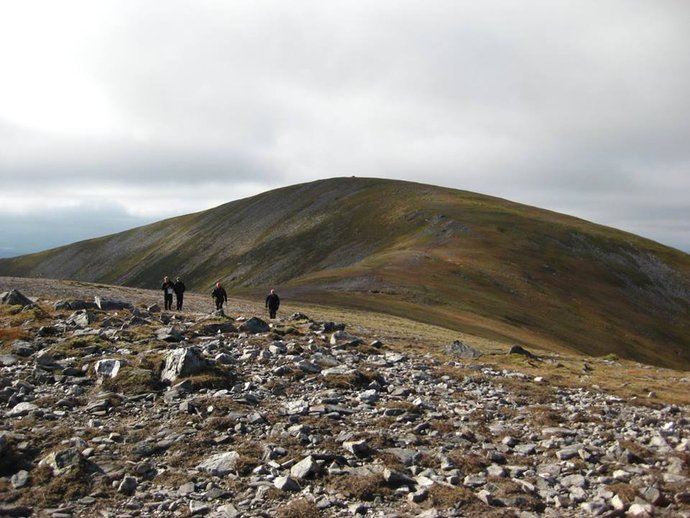 The main path seemed to head off north towards nothing much around here - to get to Carn nan Gabhar we headed down pathless ground to the right briefly, before a path re-emerges. Carn nan Gabhar on the way down: Before we knew it we were on the final Munro summit - comprised of a cairn, then a trig, and then at the far end the true summit! The views north and east were excellent... just a shame about the murk marring the western skyline. Instead of heading back to the last bealach as per the walkhighlands route, we stayed on the ridge, returning via Airgiod Bheinn, due to possible stalking activities in the corries. Only a fifty-metre reascent or so this time, so easily reached. Looking back to Carn nan Gabhar: Airgiod Bheinn can't be as well-frequented as the surrounding Munros, but it's a great hill - impressive from the south and with a decent, short ridge of its own. It also had great views back towards the ridge traverse from earlier in the day: Looking back along the rocky south ridge: Forgot to mention the views to the south: Beyond this, the ridge steepens and things get a little interesting, for the Cairngorms anyway. Various loose paths lead down towards Allt na Beinne Bige, mostly heading directly south to flatter ground before a "catch-all" path traverses right (west) towards the main stalkers' path coming down from Bealach an Fhiodha. Looking back up one of the steep sections (definitely wouldn't be a fun ascent route!): Crossing the burn at the bottom was easy, and the notorious path all the way out towards the start was hardly boggy at all, thanks to the recent dry weather. Many easy miles with more great views, and a relaxing way to finish the walk. At one point it forks - keep right, as apparently the left branch involves quite a long detour despite reaching the track more quickly. Looking back to Airgiod Bheinn: Definitely a Cairngorms classic, and good to be back in these parts too!

Good pics and report. Earlier this week did pretty much the same route as you. Over Airgiod on the way out probably the best summit of the day

Sunset tripper wrote:Good pics and report. Earlier this week did pretty much the same route as you. Over Airgiod on the way out probably the best summit of the day

Nice to see that the walk was a success, avoiding all those gunshots. Your pictures show the range to be impressive, denfinella.