Started off from the carpark at Rowardennan at around 13:30, managed the inital part of the walk no problem, up to the gate where you have to sign "Welcome to Ben Lomond", found the going harder from thereon in and had to stop a few times, before struggling off again. After getting to the top of a path which in my knackered confused mind had me convinced I must be near the summit, I was greeted by this sight: 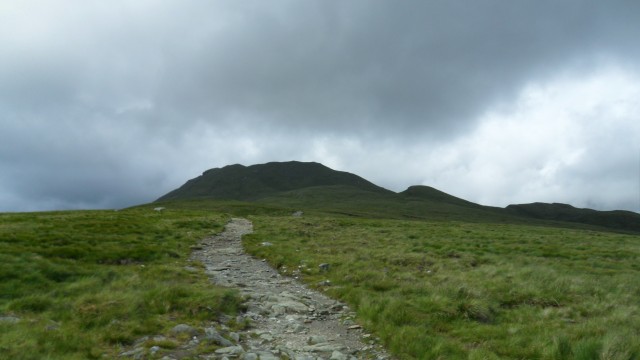 Who the hell put that there? I thought I was done!

I could have cried!

After finally getting to that final peak I found it expectionally hard to keep going, stopping every few steps and swearing randomly to myself.

Finally managed to drag myself to the summit at 16:50, on the plus side I had it to myself (which I understand is rare), but as for the view, well it left alot to be desired - 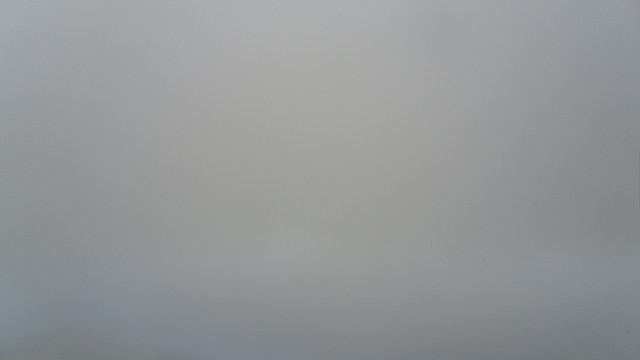 not such a great view from the summit

Didn't stay too long at the summit as the wind was getting pretty stong and it had started to rain, the rain stopped after I got down out of the cloud and managed to have a sandwich before heading back down.
One thing I did notice on the way down though is how steep some part of the path seem compared to on the way up, was left wondering how I managed to get up them in the first place!
Seen quite a few people coming down as I was on my way up, looking pleased with themselves, made me very envious, didn't seem to be many on the way up though. 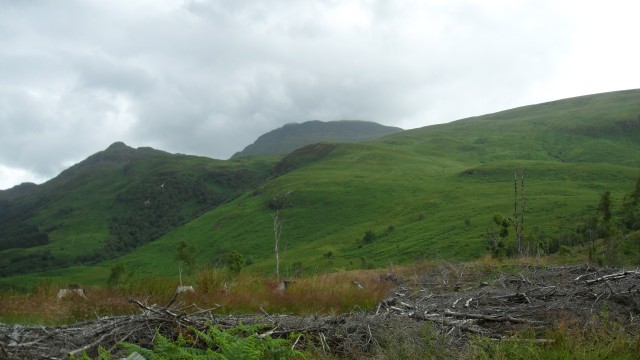 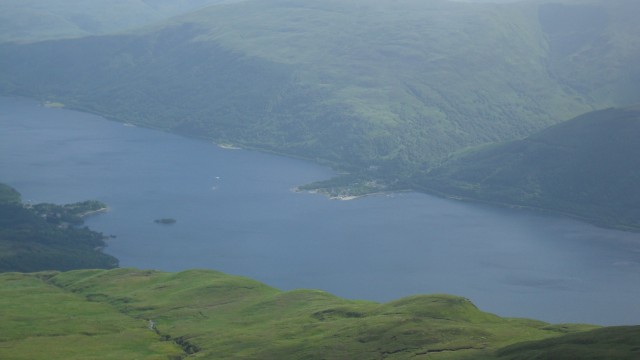 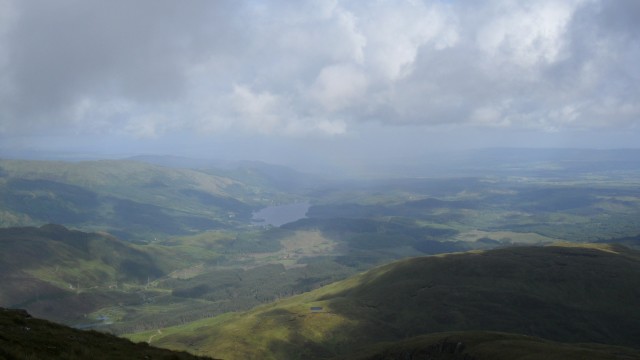 I have to say though that while I enjoyed the walk at the time I'm still suffering for it now, my legs are still killing me 3 days later!

Thinking about trying Schiehallion next, is this a good idea?

Schiehallion is perfectly easy... but has more 'false summits' where you'll keep thinking it's just that next bit... and then finding out it isn't!

Coming down always feels worse than going up... Love your picture of the view from the summit!!

Well done anyway... and remember my mantra - "there's no such thing as an easy Munro" - keep saying that to yourself and you probably won't find it so hard. I always find mountains harder when I originally thought they were going to be a doddle - when I set off thinking they're going to be a real effort, I'm usually pleasantly surprised bow how easily I got up

Oh I certainly realise there is no such thing as an easy munro now!

Haha, the picture of the view is brilliant!

. Ben Lomond was also my first Munro and the weather was much the same at the top. Been up again since then on a nice clear day and the views at the top are well worth the effort. Don't know about Schiehallion but I would recommend any of the hills around Arrochar. Well done again and happy walking

Well done, that would have cleared your lungs out

. I had a similar excursion on Tuesday, a strange feeling being all alone on the summit.

Don't worry, they definitely get easier

Nice first report Badegg and some nice pictures. That certainly sounded painful. Do you do any walking? It might be useful to go for a 3 or 4 mile flat walk during the week to help you build up to the hill walking. Doesnt have to be hard. Good luck on Schehallion if you choose that as your next munro.

Well done. No better way to get fit.

I have an identical picture of the view from the summit - did you hack my photo database? Still, we both have reasons to go back.

monty wrote:Nice first report Badegg and some nice pictures. That certainly sounded painful. Do you do any walking? It might be useful to go for a 3 or 4 mile flat walk during the week to help you build up to the hill walking. Doesnt have to be hard. Good luck on Schehallion if you choose that as your next munro.

Nah I've never been a walker up until last week, after passing my driving test last November I have spent alot of time driving around loch Lomond, after a few of months of threatening to climb Ben Lomond I finally went for it.

But that idea of flat walking is probably a good idea before I try another munro although my six year is now screaming he wants to climb a mountain with me, so hopefully he'll accept Conic hill as a mountain

No Hantswalker I didn't hack your photo database, I'm sure there are many of us who have that exact picture from the summit

I was like you about six months ago. Didn't walk up a kerb if I could help it and completely unfit. I then started putting the effort in to prepare for my walk up the West Highland Way (next week) and feel much better for it. My legs still hurt but not nearly as much as they did at the beginning. I was up Conic Hill last weekend and it is a good place to start. If it's close to you get yourself up it as often as you can and you'll start coping with it much easier in no time.

It also helps if you just change a few things about your normal daily life: walk to the shops instead of taking the car; use the stairs instead of the lift; eat salad instead of a fish suppers; stop drinking. If, like me, you manage to stick to two out of the four of those you'll be doing ok

Well I'm one up already as I don't drink anyway

I know the review is years old, but its the first one Google gave me

I love walking, I don't mind hills, I'd love to do mountains but like you my fitness needs to improve. I can manage Conic with the odd swearing and ranting that I'm gonna go back down. The other day done Drymen to Balmaha on the WHW route, then had a grand idea of following the main road back to Drymen for my car - note to others, just DONT! If you are doing what I done either wait for the (every 1.5 hours) bus, or just stop at the top of Conic and retrace your steps back.

I'm gonna tackle Ben Lomond next week, been on my to do list for a while and this review has really helped, and reminded me that it can be a long slog and many "oh good I'm there! sh*t I'm not..." moments.