Basing myself in Crianlarich for 5 days, I planned to tick off the 7 Munros in this area, the first two being the highest- Ben More and its adjoining neighbour Stob Binnein.
Working in the Middle East I had to select a week of my holidays spent back in Scotland and what a week I chose. High pressure was dominant for my week producing an 'Indian Summer' over Scotland and I was so happy.
I had a wonderful drive over from Auchterarder in the morning and was able to view the mist rising from Loch Earn and just knew it was going to be a cracker. I had a quick detour to nearby Killin to visit the outdoor shop there and ended up £200 lighter in my bank balance having purchased a new pair of walking boots. Not usually accustomed to wearing new walking equipment immediately upon purchasing, I did break the golden rule of wearing my new boots. The assistant in the shop did also say I would be fine so I took the gamble.
Passing the usual parking spot by Ben More Farm, I decided to park 400m further west towards Crianlarich in a proper lay by. Being a week day, no cars were parked in either location. There is a lovely wide grassy strip on the A85 roadside on the left hand side of the road leading east towards the usual starting point at Ben More Farm, a really useful addition when HGV's are swishing passed you a few feet away. Setting off up the track, a quick look up Ben More showed the last few remnants of mist being burnt off - a good sign for the day ahead. I reached the usual gate where I would now leave the track and commence the climb up the well-documented steep climb to the summit. A sort of path exists from here but it is extremely boggy, something that would be with me over the next 4 days.
Reading previous reports from WH on this route accurately describes this path of sorts as very steep and relentless, something I could agree on. Within a few minutes I was p****** with sweat not helped by the rising temperature and the route up was tough and never ending. One consolation and excuse to stop was the ever increasing views the higher up I went of Crianlarich, Lochan Lubhair below and the surrounding hills. View of Cruach Ardrain on ascent 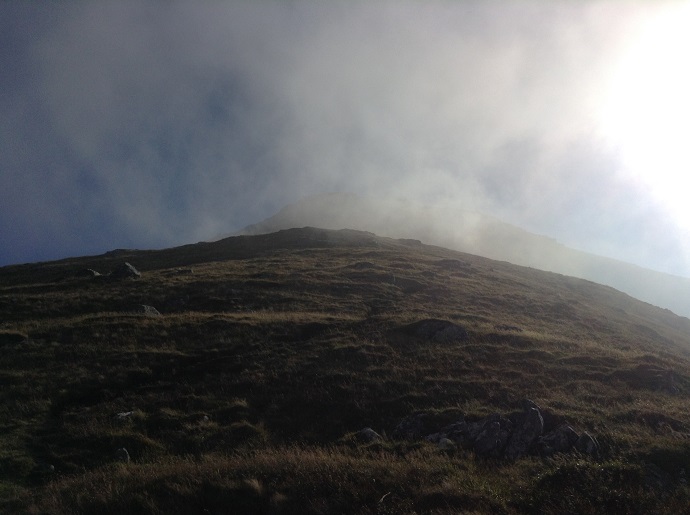 After what appeared to have been an eternity of head down and breathing hard, the bog did relent and I was now on drier ground. I finally reached the stone dyke on my right with the steep ground of Coire Chrom further on, an area to be avoided. The path then follows this dyke for some time before it veers off to the left, easing off slightly before the final push to the summit trig and big stone cairn of Ben More. Summit of Ben More in sight Ben Vorlich & Stuc a' Chroin from summit of BM View SW of summit of BM

The views from the summit were outstanding as the sun was now well and truly up by this time. The view across to my next objective, Stob Binnein was outstanding. Two ladies were already on the summit when I arrived and had come up from Inverlochlarig, the southern approach.
After a short refreshment, I now set off down the slope of BM and towards the bealach. One small difficult section down a rocky slope gave me a problem but was easily avoided by a path to the left. From here the path down to the bealach was straightforward. The two ladies earlier had shot passed me quickly and were up Stob Binnein by the time I reached the bealach. Stob Binnein from the bealach

Having another short break here, a guy and his dog joined me who had walked up to the bealach from Benmore Glen, a route I intended to walk back on once Stob Binnein was conquered. We now set off together on the ascent path up to SB summit which was made easier by each other's company. Ben More from summit of SB Looking along the south ridge from SB Within no time, we were all standing on the summit admiring the panoramic views of Cruach Ardrain and Beinn Tuileachean, two Munros for tomorrow's walk. We also got great views of the ridge to the south, the alternative route to these summits from Inverlochlarig. We could have spent a long time on the summit as the views, still air and hot sun were enticing us to dwell longer but we still had a long way over difficult ground to go to the end of the day's walk.
The walk off SB back to the bealach was trouble-free and it was here that my friend and his dog parted company to now ascend BM while I was now descending the bealach into the Benmore Glen below. Large boulder at bealach marking the way down Looking back up to bealach on descent

From the big rock which marks the exit point, a sort of path steeply drops into Benmore Glen below. The path soon disappears and you have to work out the best route down. Wherever you venture, the ground is extremely steep and slippery and there will come a time where you will slip and fall. Not for me though as my new boots were turning out to be excellent in gripping the greasy and boggy grassy surface. The path does get less steep as you approach the glen bottom. Looking back at the bealach from Benmore Glen When you reach the river, a path of sorts can be traced for a brief time before a good track joins onto it taking you out of the glen to the point you where you left for the ascent earlier in the day. A final walk out down this track takes you to Ben More Farm then along the busy A85 back to the awaiting car in the lay by.
A great day's walking in glorious weather making up for the lousy days on the hills in snow, wind and rain. Two Munros bagged, five more to do. Will tackle Cruach Ardrain and Beinn Tuilaichean tomorrow. Report pending.

Cracking pics and report! Looks like you had a great day.
When I get round to these two it won't be straight up from the farm - that looked like a total killer of an ascent!

Great photos. I was up there on a cracking day in June but have to admit your views were even better!

Fantastic photos of what looked like a brilliant day.

I did these two a couple of months ago and preferred my conditions, I couldn't see more than a few yards in front of me so didn't get the chance to see the never ending climb - I think if I'd seen it I might have turned back!

grumpy old bagger wrote:Cracking pics and report! Looks like you had a great day.
When I get round to these two it won't be straight up from the farm - that looked like a total killer of an ascent!

Thing is, there is no easy routes up these 2. Even from the south there is an initial steep climb until you get onto the ridge.

It's a killer isn't it! I did these 2 about a month ago, very sunny but it was pretty windy as well which helped with the temperature. One of the hardest climbs I've done I think. Amazing views though - your pictures are ace