A gorge-ous route up Beinn Bhuidhe but no fyne views...

A gorge-ous route up Beinn Bhuidhe but no fyne views...


After my summer Torridon holiday and the discovery of several holes in my boots I spent a very enjoyable couple of hours in Tiso trying on every boot they had (it felt like it anyway, probably even more so to the poor guy who was helping me!) So I had my new boots (Scarpa Delta was the eventual choice

) and I needed to try them out. I have plans this week for big walks (the Tyndrum 4 and Lawers 7 are hopefully finally going to come to fruition) but I thought maybe something a little less ambitious for new boots day 1. After much indecision I decided to go for Beinn Bhuidhe. Fairly close to home and hopefully not too difficult

Conscious of the shortening daylight hours I set off from Glasgow not very bright but pretty early at 7am and headed up the road. Arrived at Arrochar, booted up and set off. Then realised that my map didn’t really match the ground.

It dawned on me – I needed to go one loch further over. Feeling very stupid I jumped back into the car, 15 mins later arrived at the tip of Loch Fyne, parked and set off again.

I set off on the very long walk in. I’d considered bringing a bike after reading reports but I didn’t think my bike would fit in the car. I’ve been meaning to get a fold up bike as I’ve a plan to do the Ben Lawers 7 on my own but haven’t got round to it yet! As I expected the walk in just kept going. It was warming up and I started shedding clothing. I saw the cows that other people had written about but they were fortunately safely behind fences so I could power on through without danger. 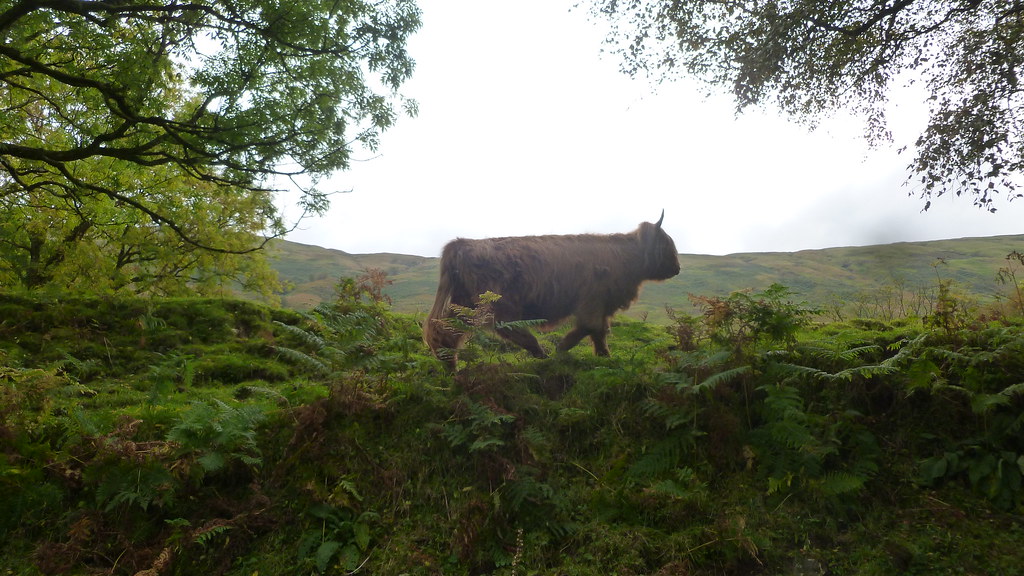 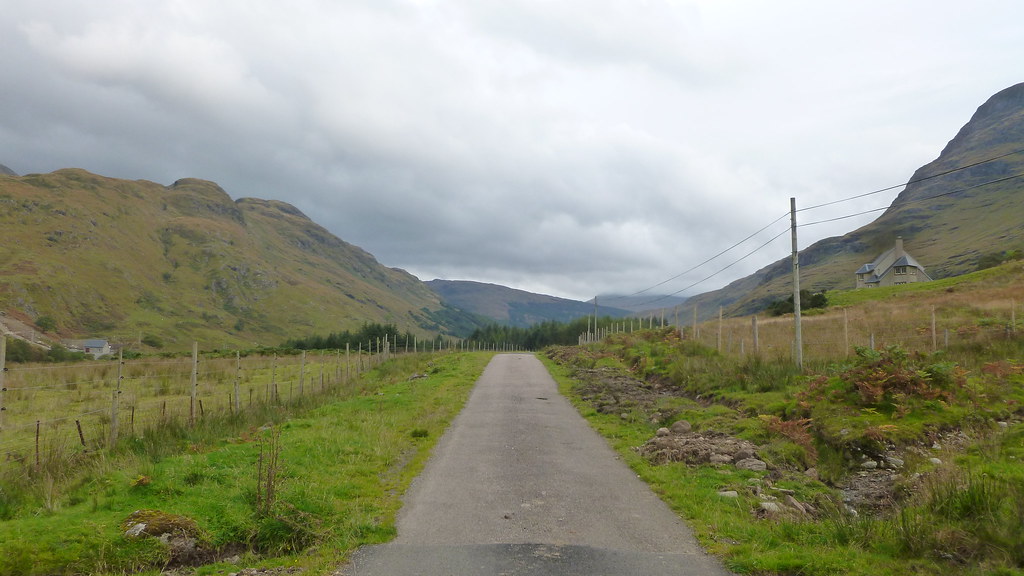 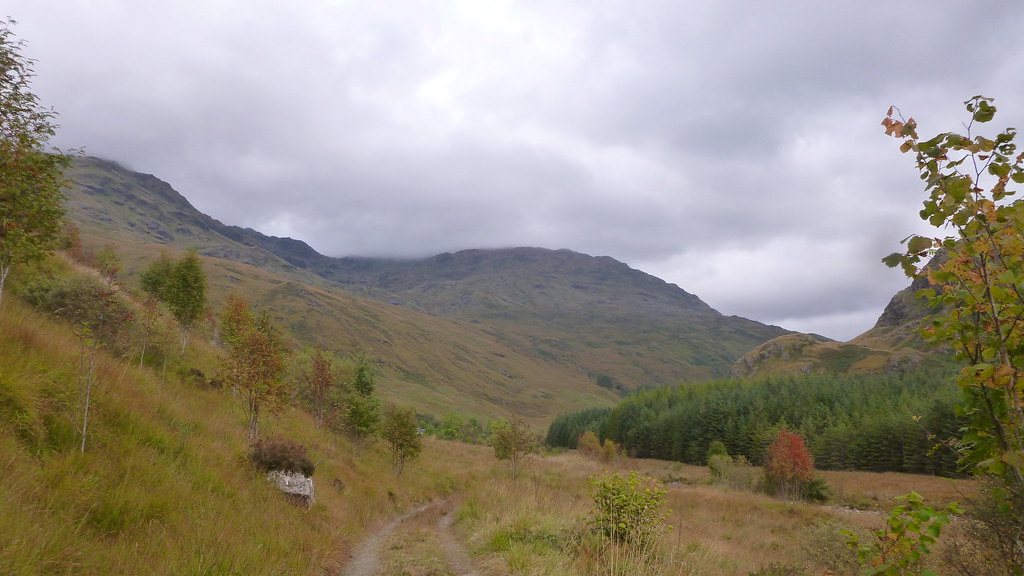 Eventually I reached Inverchorachain and headed up the gorge. I was so pleased that I’d taken this route rather than the slog up the grass; it was steep and scrambly in places but utterly gorge-ous (groan…)

Looking back from halfway up the gorge 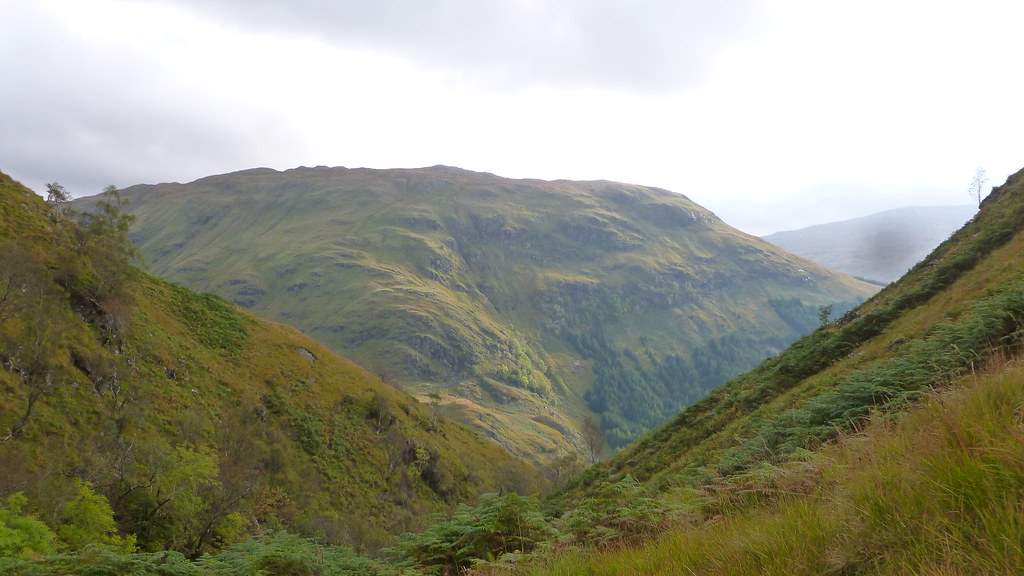 This was the only place that gave me any bother. I had to try about three different ways up before I managed it. 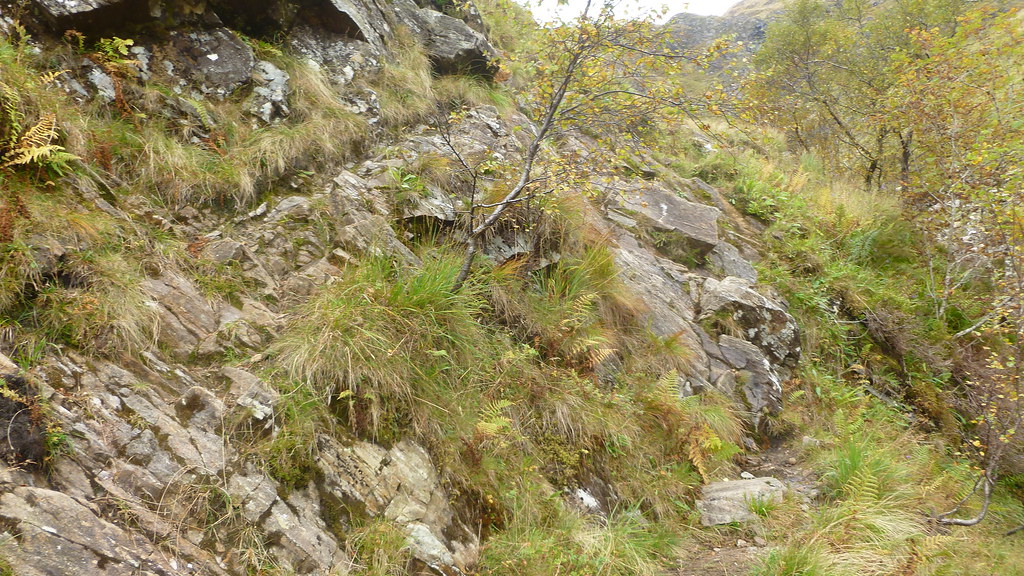 I enjoyed the waterfalls and came out at this wee corrie which was pretty impressive as it seems to come out of nowhere. 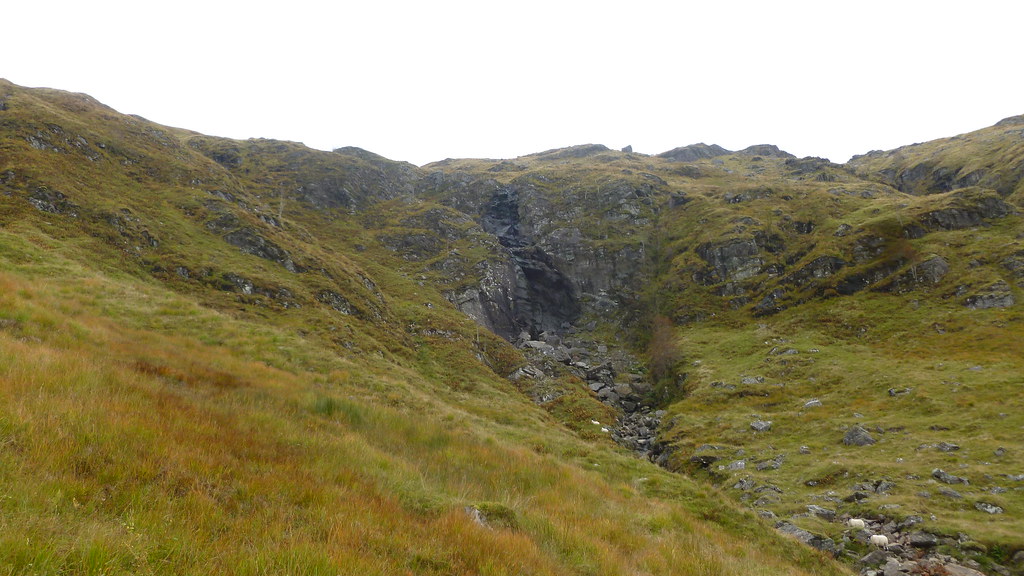 I followed the path up the left hand side and then came out onto a sort of plateau which was of course full of bogs. The path was faint in places but always visible, so off I went, enjoying the waterproofness of my new boots that didn’t let water in like my old ones.

Although the weather ahead looked less appealing, the view back was still good: 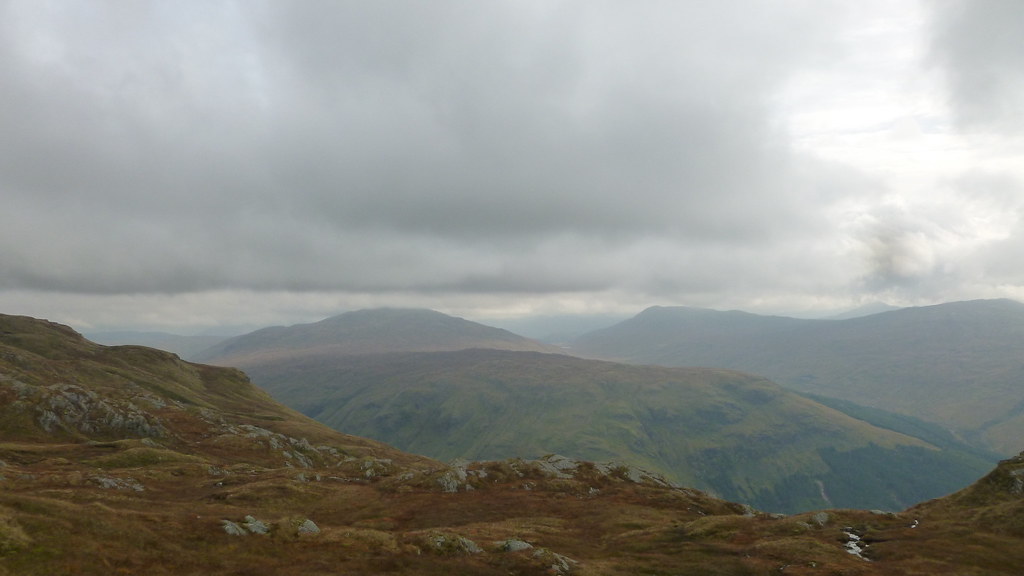 As I walked on, the clouds seemed to be receding and a big looming cliff appeared ahead. 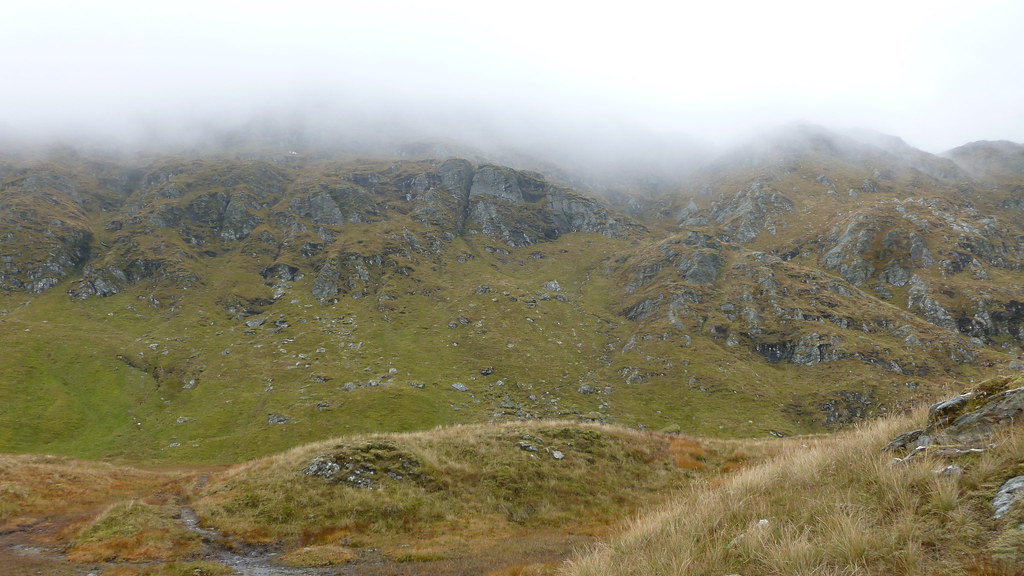 As I got closer I could see the gully that the path went up, and although steep and again scrambly in places there were no real problems. Unfortunately the clouds had stopped clearing and by the top of the gully I was surrounded with visibility of only a few metres. Stopping only very briefly for the addition of an extra layer and a hat, I turned left and followed the ridge. Although only fairly short it was a very enjoyable ridge and brought me to the summit after about 15 minutes.

I stopped and ate some food, drank some water, took some pictures in the hope that it might clear, but sadly not. 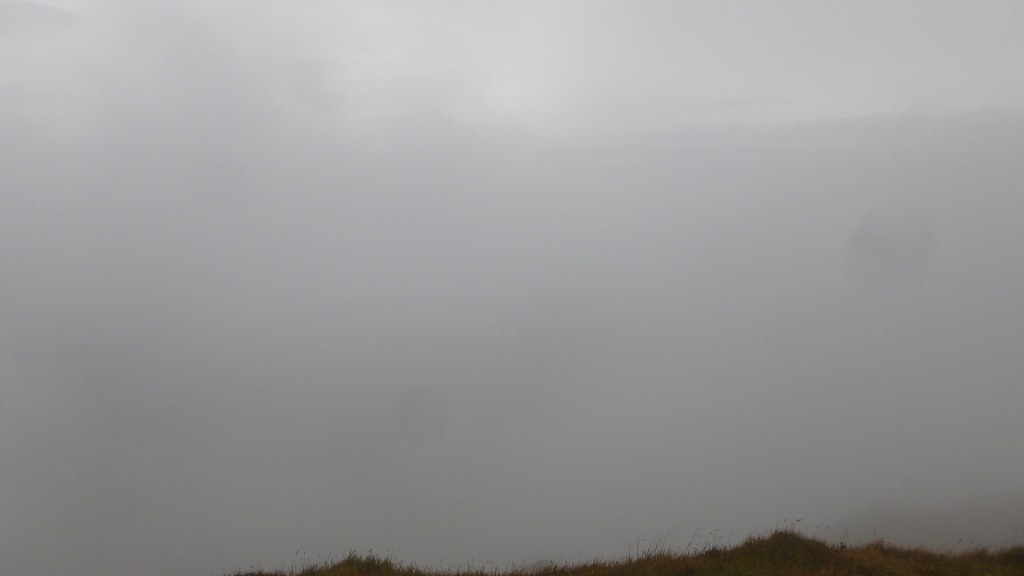 I was disappointed to miss out on the famed views out to Arran, Jura and Mull and of Loch Fyne, but I was getting cold so started to head back. 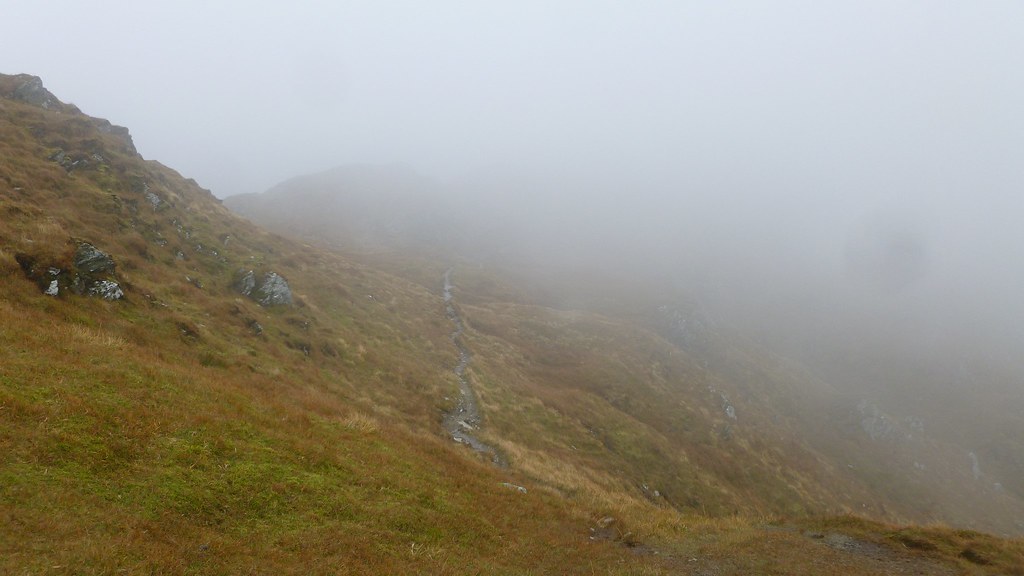 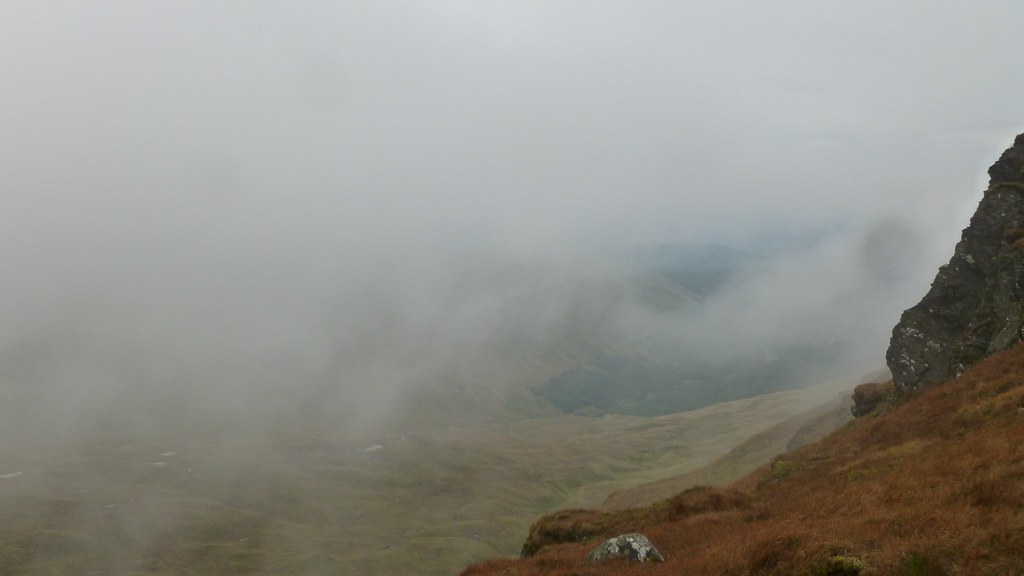 By the time I got back to the top of the gully it suddenly opened up - I was out of the clouds and there were views in both directions. After some fumbling with cold fingers I started snapping pictures quickly before it all disappeared! 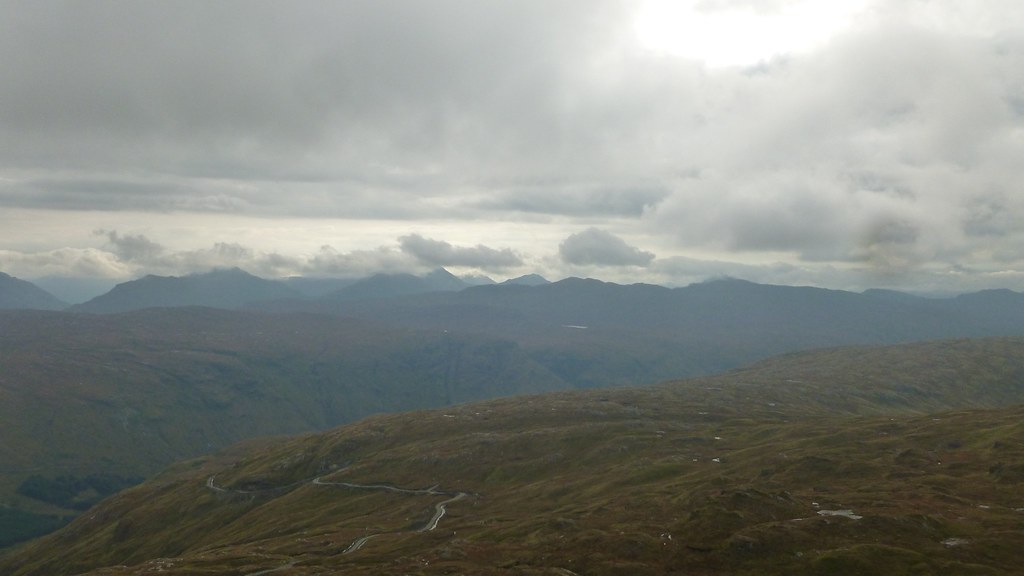 I continued on the ridge as suggested in the walk report and headed down grassy slopes. I was glad to avoid descending the gully but I feel like I may have left the ridge too soon as it was very steep and quite tricky in places. I struggled on but eventually I saw the earlier gorge and as I’ve never been a fan of grassy slopes I decided that steep downhill might be easier on a path. I joined the gorge path in the corrie and headed back down, negotiating the nightmare scramble once again. 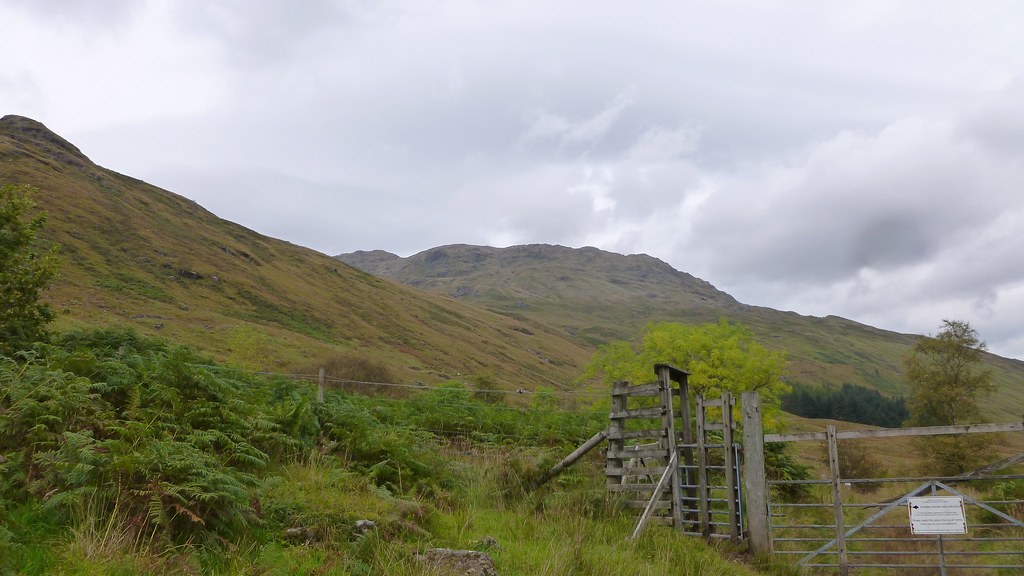 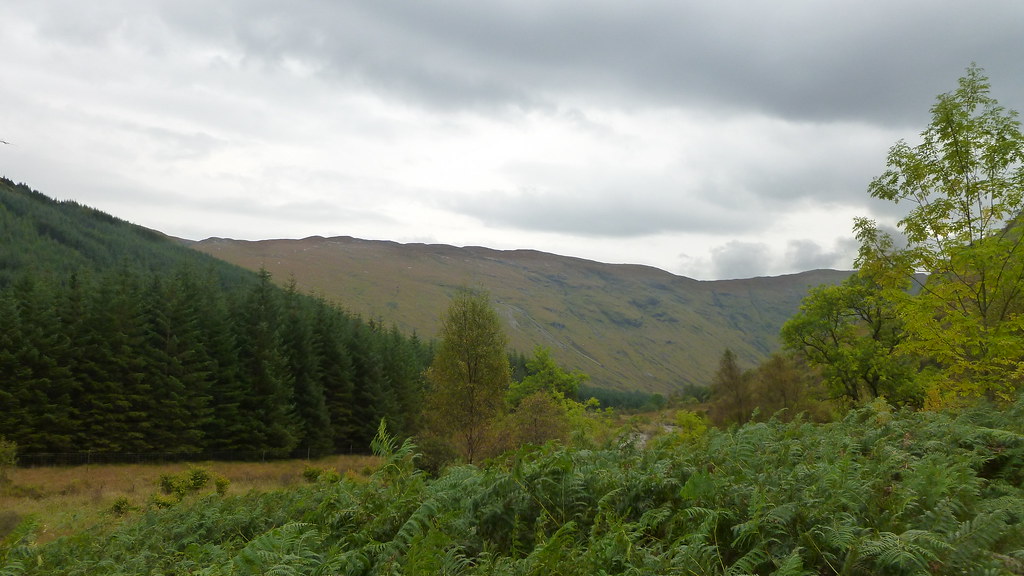 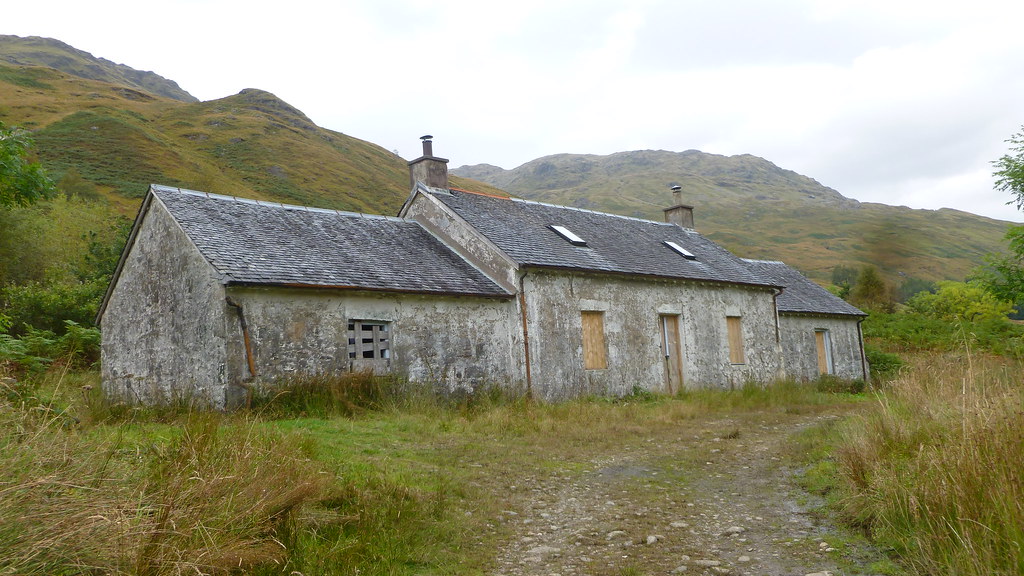 I reached the bottom and headed back off along the long long long….long long long…long path back to the car. This time I did meet a cow on the road, and not knowing proper cow etiquette but sure that I didn’t want to antagonise him I walked past slowly and quietly on the opposite bank. I was very relieved when I wasn’t chased as those horns look pretty formidable and I wasn’t sure how much running my legs could do! 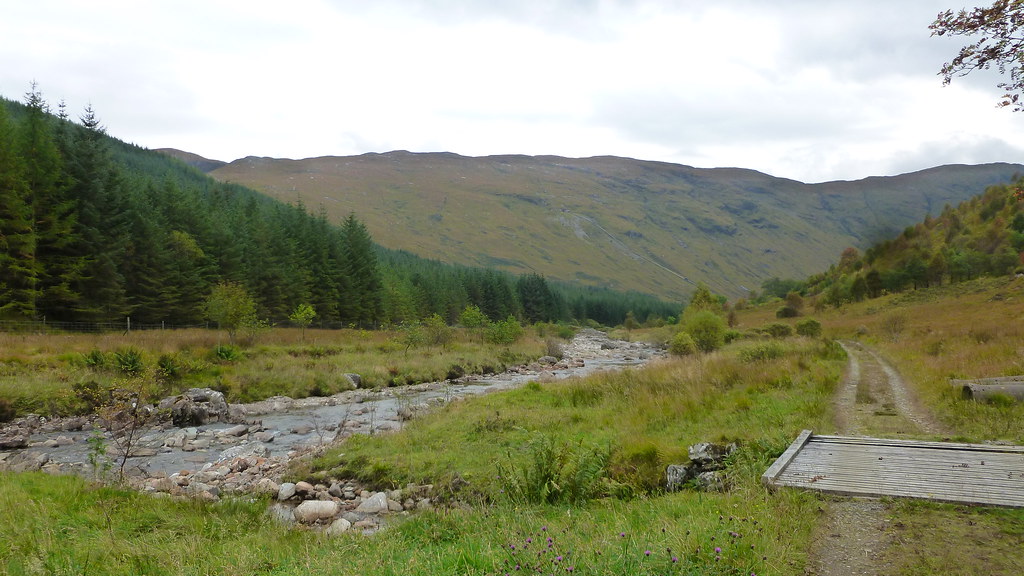 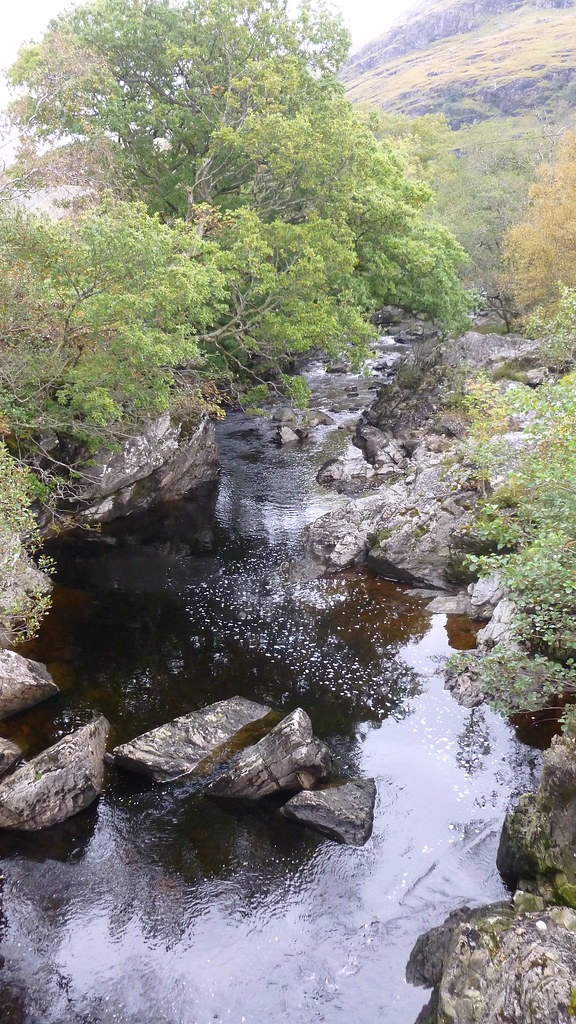 I popped in to the Fyne Ales brewery as it was open and accidentally started my Christmas shopping! I then staggered the last 5 minutes back to the car weighed down by bottles and other goodies. At least there will be a good story to go with that gift! 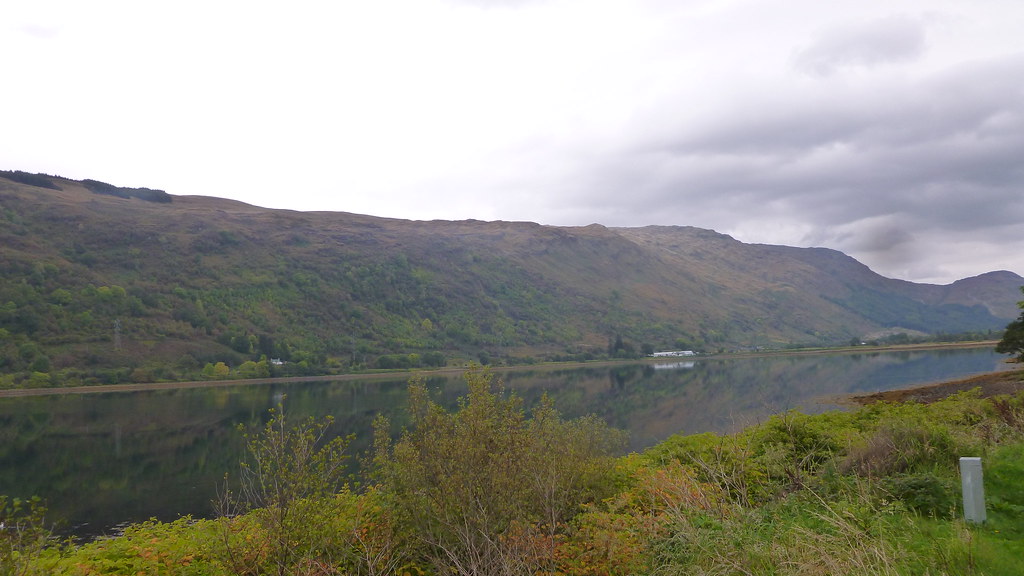 As comfortable as my new boots were, it was a relief to take them off and sit down, but also a lovely feeling to have dry feet after a walk for the first time in ages. All that remained was the long drive back home, so I popped in my Lord of the Rings audiobook and headed off, happy in the knowledge that however tired my feet felt, Frodo and Sam’s were worse!

This one is on my to do list in the near future. The long walk in keeps putting me off. I'm with you on avoiding grassy slopes - horrible.

I had a run in with some angry cattle (a whole herd of them) about this time last year on the way to Ben Vorlich (Loch Lomond) - scary. Still, could be worse - at least we don't have any wolves and bears to contend with!

Riverman wrote:This one is on my to do list in the near future. The long walk in keeps putting me off. I'm with you on avoiding grassy slopes - horrible.

I had a run in with some angry cattle (a whole herd of them) about this time last year on the way to Ben Vorlich (Loch Lomond) - scary. Still, could be worse - at least we don't have any wolves and bears to contend with!

Hi Riverman, don't let the long walk in put you off too much. It ain't quite so long as it may seem, I think and a bike helps reduce further

I done this walk on Friday. Weather conditions are an exact match

We took the new hydro road down being the only difference. My knees are still feeling it today. I found this hill harder than I thought it would be, a good challenge at least.
We think we came off the ridge a bit to early as well but there was some evidence of other walkers that's obviously done the same thing.

That last line made me laugh

An enjoyable read. I remember that wee step, took me a few moves to get up it. The walk out must have been fab in the new boots

teaandpies wrote:We think we came off the ridge a bit to early as well but there was some evidence of other walkers that's obviously done the same thing.

Yeah, I saw what looked like a 'path' and followed it. I realised afterwards that it was probably folk coming up rather than down.

The walk in was long but the scenery is lovely and it's not too bad really. Found it worse on the way back but don't be put off by it! It only took me just over an hour each way.