About three or four times a year my back goes on strike. It just seizes up, pretends to be pained by the exigencies of life, and refuses to budge. Putting on a sock becomes a major undertaking; my gait becomes a delicate and misshapen waddle. That’s bodies for you: they have a mind of their own, and given the least encouragement will try to take over all the levers of state.
Some years back my other mind, the one I prefer to rule the roost, took an executive decision: it would not be bullied, cowed or diverted from whatever had to be done, by this recurrent bad back. It would ignore it, grin and bear it, and get on with the business of living.
And so as I got dressed the other morning, using a million well-tried ruses to thread clothing over an inflexible torso, and with the call of the hill ringing insistently in my head, the decision was made in a millisecond: bad back or not, today we’re off up a mountain.
I moved gingerly around the kitchen, trying to get some warmth and relaxation into my back muscles as I cooked breakfast, prepared my food for the day, and packed my rucksack. For a second or two I wondered whether I should make a concession to my substandard spinal state by carrying a lighter load. Did I really need to take everything that litters the bottom of my bag? Could I perhaps manage for the day without the Complete Works of Walter Scott? Did I really need to take my favourite pink faux-fur onesie? Could I bear the thought of doing without my solar-powered hot water bottle? That moment of weakness soon passed: no concessions; no surrender: I would carry my normal load. It’s me who’s in charge, not my wretched back.
It was a still, autumnal day, with a thin layer of high stratus veiling a milky sun, and by 1015 I was parked up by the station at Achnasheen and looking for the approach path to Fionn Bheinn. Clearly I was not the first: the gates and fences thereabouts were well-plastered with strident notices: OFFICIAL PATH TO FIONN BHEINN/WALKERS THIS WAY!!!/FIONN BHEINN OVER BRIDGE TO RIGHT and so on. Feeling slightly browbeaten onto the OFFICIAL path, I started up beside the Allt Achadh na Sine. The path winds up pleasantly enough, gaining height and a welcome distance from Achnasheen and the junction of the A890 and A832. Traffic noise was largely masked by the rush of water down what is sometimes a deep ravine closely skirted by the path.
My back had gone into a quiet sulk, defeat conceded.
It is only once over the brow of the first hill that you get a sense of what Fionn Bheinn is all about: wide spaces, mainly gentle slopes, peat and moss and tussock rather than rock. The day was Sunday, and right up to the top I never lost the feeling that this was a no more than an agreeable Sunday walk. From time to time, on the lower expanse, deep gauges in the peat land have to be negotiated. I wasn’t sure whether this surface pitting was a natural phenomenon, or whether it was the aftermath of ancient diggings. Viewed from higher up, these deep formations have a curved and harmonious regularity that seem to suggest something natural in their creation. 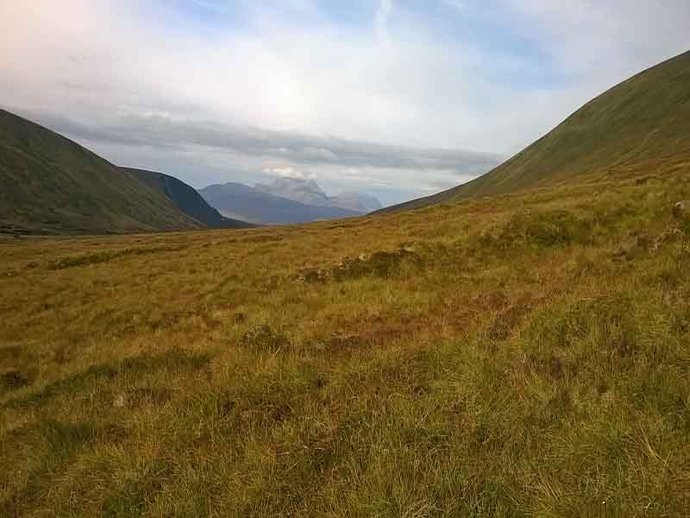 I headed up the easy contours around the flank of Creagan nan Laogh, picking up the faint path now and again. This path settles in to the east of a little burn for a while, then is lost in the thick moss on the steeper slope of Fionn Bheinn itself. I was heading for the single outcrop of rock at the eastern end of the ridge. At one point two other walkers appeared there before disappearing again. I never saw them again, east or west.
The only hard work of the day was the final ascent to the outcrop. Here the deep spongy moss made every upward step a double effort as the foot sank lower and lower before finding some purchase. I soldiered on up to the little rocky tooth, and stopped there for a flapjack and some water. It had taken two hours to get there. To the north-west the ridge stretched up easily to the trig point. I set off along its wide brow, and in less than twenty minutes I was at the summit.
Some quirk of my line of approach meant that it was only when I was a few yards from the trig point that one of the delights of Fionn Bheinn hove into view: a vista down onto Loch Fannich. To the west I could make out my recent friend Beinn Eighe, with the incisors of Liathach beyond. Looking down on Loch Fannich Looking north-west towards the massed peaks of Fisherfield and Letterewe

The trig point itself was a disappointingly municipal affair, no more than a lump of vandalised concrete. It was stained with bird droppings, and I wondered what might sit there and survey the soft contours of the immediate hills – a merlin perhaps? Looking west towards the distinctive shapes of Beinn Eighe and Liathach

A chilly wind was getting up and I set off down the ridge, stopping on the way to look down into the Toll Mor, Fionn Bheinn’s northern coire. I wondered whether this feature might just transform Fionn Bheinn from a high hill into a real mountain, but even this was a relatively gentle, grassy cirque, striated with a necklace of unimposing rocky crags. Everything was soft and contained and very Sunday-afternoonish.
I stopped again at the rocky tooth for some shelter to eat my sandwich. While munching I debated whether to descend the same way, or make a slight diversion to the east to find an alternative way down. My guide book was hazy on the fine detail towards the end of this route and so, not wanting to risk the ire of the Achnasheeniacs by coming in on the wrong side of one of their notices, and not seeing that it would add much interest anyway, I set off back the way I had come.
What a descent! The deep moss which had held me back on the way up now made Seven-League Boots of my Scarpas. I skipped down, bouncing on air as the deep, elastic vegetation absorbed each footfall and sent me rebounding skywards.
An awkward jump at the peat gouges gave rise to the first complaint of the day from my back. For a little while I walked like a duck until it settled down again, but by now I was over the brow and had the delights of Achnasheen in my sights. It was a quick descent beside the burn, with just the faintest undertone of grumbling from my lumbar region.
I reached the truck a happy man. It would have been so easy, on a Sunday morning, to have given in to the whingeing coming from my lower back; to have spent the day lying around aahing and ouching and feeling sorry for myself. As it was I had bagged Munro number 7. Admittedly, it was by no means the most challenging of the hills in the great lexicon, but a hill is a hill, and a Munro is a Munro; and a bad back is no more than a state of mind to be overcome.

Well done! Mind over the matter of back problems is not easy.

Sometimes you have to make yourself do it because you know how much you'll enjoy it when you get there. That's what I tell myself when the alarm goes off and it's still dark anyway

Don't know why Fionn Bheinn gets a bad rap. ( OK , the path up is awful ). But the views, as you mentioned, are fab.