Late decision to head to Moffat as the forecast looked better for the southern half of the country. Also meant not having to get up quite so early. Drove down the M74 to Moffat then up the A708 and parked in the wee lay-by just past Birkhill and the Welcome to Dumfries & Galloway / Scottish Borders signs.

Now around dawn, got ready and cycled back to the entrance to Selcoth farm and fishery where I hid the bike in the undergrowth and locked it to a tree.

Walked across the bridge over Moffat Water

Followed some quad bike / argocat tracks up and over Croft Head

Then down towards Wamphray Water. Initially followed the SUW before going more directly downhill. The route up West Knowe looked very steep but probably preferable to a longer detour up the northerly ridge.

Then steeply up West Knowe - about 230m of ascent but probably the hardest part of the walk as it’s very steep - kept to the side of the fence for the much of the way.

Looking back to Croft Head

Over West Knowe then headed towards Loch Fell. Still sunny at this point but could see low cloud and clag coming in from the SE. 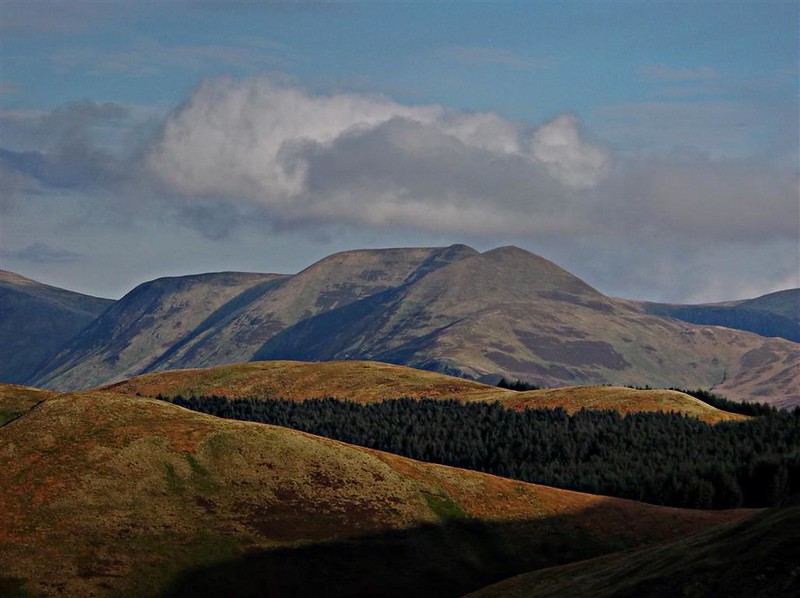 By the time I reached the Loch Fell summit, the clag was down and was to remain this way for the next few hills.

NW down to the Selcoth Burn then up Capel Fell

It’s only about 2km there and back with very little ascent from here to the New Donald of Smidhope Hill. Had originally planned to cover it but as I could hardly see anything in the mist there didn’t seem any point. Headed back down SE before starting up Wind Fell.

Some of the hills seemed to have no cairn or marker at the summits, often just a meeting of fences. Over Wind Fell then on to Hopetoun Craig.

Heading towards Ettrick Pen, there were some glimpses below the cloud but the top was once again in clag.

From Ettrick Pen followed the track which heads down to Over Phawhope and the bothy. A lot of construction work on access roads was underway presumably to assist with the forestry work.

Stopped off in the bothy for a break and some lunch - not often I get to sit in an armchair to eat lunch during a hill day.

After lunch headed up towards Potburn then followed the Bodesbeck track to the edge of the trees before turning north to go up Bodesbeck Law.

Could see Andrewhinney Hill in the distance with Mid Rig and Bell Craig in between. Now just a case of following the faint track along the ridge.

Crossed the fence to the cairn - wasn’t the first time I seemed to be on the other side of the fence from a summit cairn today.

At the top of Herman Law, turned west to follow the fence and head back down to Birkhill

Through the gate in the wall and crossed towards the building at the edge of the road where the gate has a sign pointing to public footpath. Short walk along the road to the car, got changed and drove along to Selcoth to pick up the bike and then home. Weather hadn’t been quite as good as hoped but it had stayed dry all day - quite enjoyed the day’s walk and once again hadn’t seen any other walkers on the hills.

Superb! That was quite a hike with some great photos. 40k in 9 hours is good going!

The bothy looks like a nice one, lunch you say though... did that include the two cans on the mantelpiece?!

Co-incidentally I've just been looking at some of the Donald routes, might ahve to break with my own tradition and get the bike out like you've done for these fellows. Nice report!

Nice one, thats a cracking round. I did these in two trips and not sure how comfortable I would have been with my limited riding skills using a bike on that road