Lost on Lui - the Tyndrum 4

Lost on Lui - the Tyndrum 4


I feel like I should write this walk report, not because I’m particularly proud of myself today, but more to highlight as much to myself as anyone else the danger of making errors on the hills, especially in bad weather! It's very easily done and today has perhaps been a bit of a wake-up call to my 'it'll be fine' attitude. That being said, although I'm about to come off as an idiot and an amateur, I'm normally very good with navigation!

After reading through a lot of walk reports on here, I decided that today’s walk would be the Tyndrum 4 from Dalrigh. I read through everything, marked up my map and felt prepared. The weather looked to be good, and I set off from Glasgow just before 6 hoping to make the most of the daylight. I arrived at Dalrigh to find, to my shock that I’d been beaten there!! Not what you expect at the crack of dawn on a weekday, but he was doing my walk in reverse so we set off together down the track for a while. 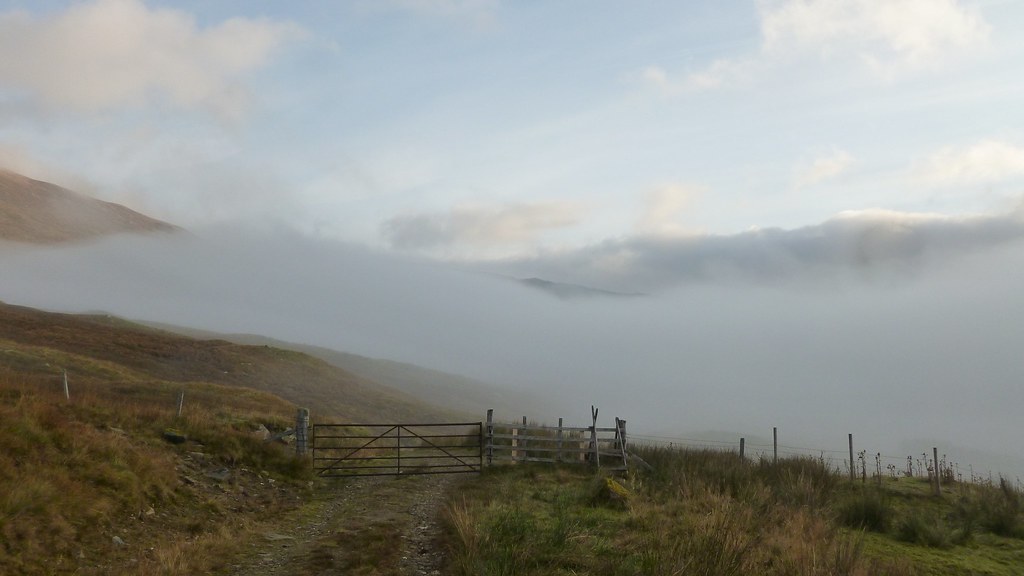 We eventually parted ways at Cononish Farm, and it was here I made my first error of the day, setting off down the wrong track at the fork, fortunately I quickly realised my mistake and although I felt silly there was no harm done.
Continuing along the track, the weather started to brighten a little, and the sun was coming over the top of the mountains which were starting to appear on my left, what should be my descent later on. Lui came into view and was starting to look majestic at the head of the valley, albeit with her head in the clouds, a situation which was not to change! 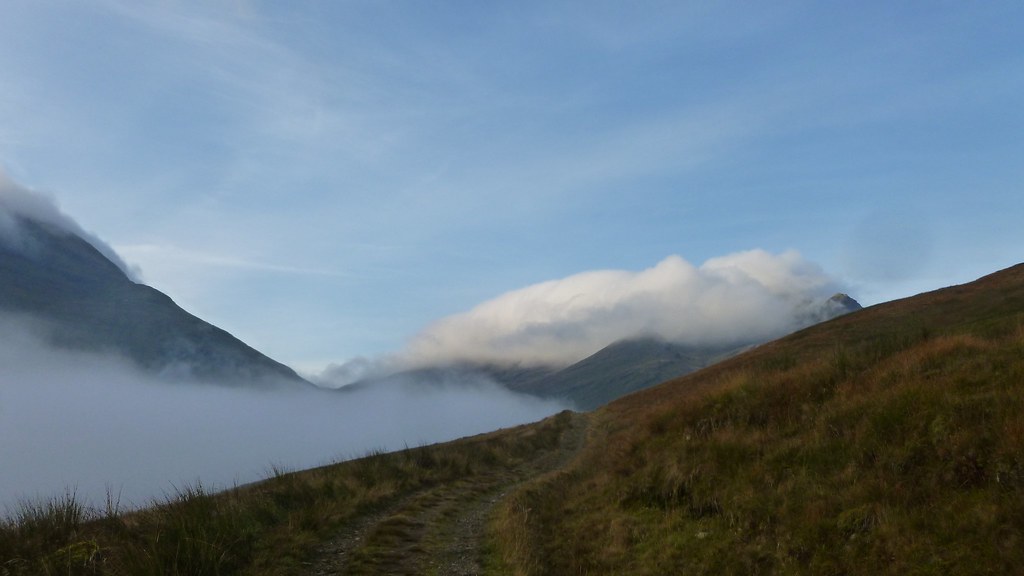 As I approached Lui there was a spectacular cloud inversion, which I didn’t photograph very well so you’ll have to use your imagination. 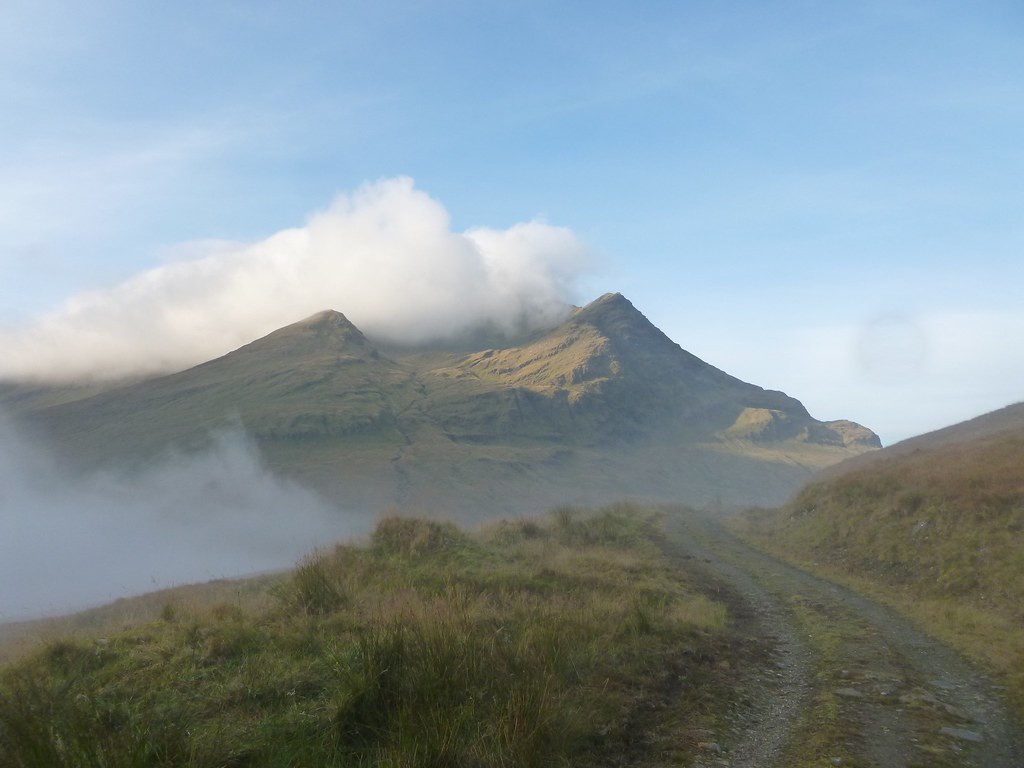 It was near the end of the track that I made my next error, which was to be a much more major one. I remembered reading in reports that I should bear right and head for the ridge before crossing the stream to avoid ending up climbing the central gully. So I crashed off into the long grass and bogs, following what could have been a human trail, but was as likely animals. It felt a little odd but I persevered and headed for the ridge. 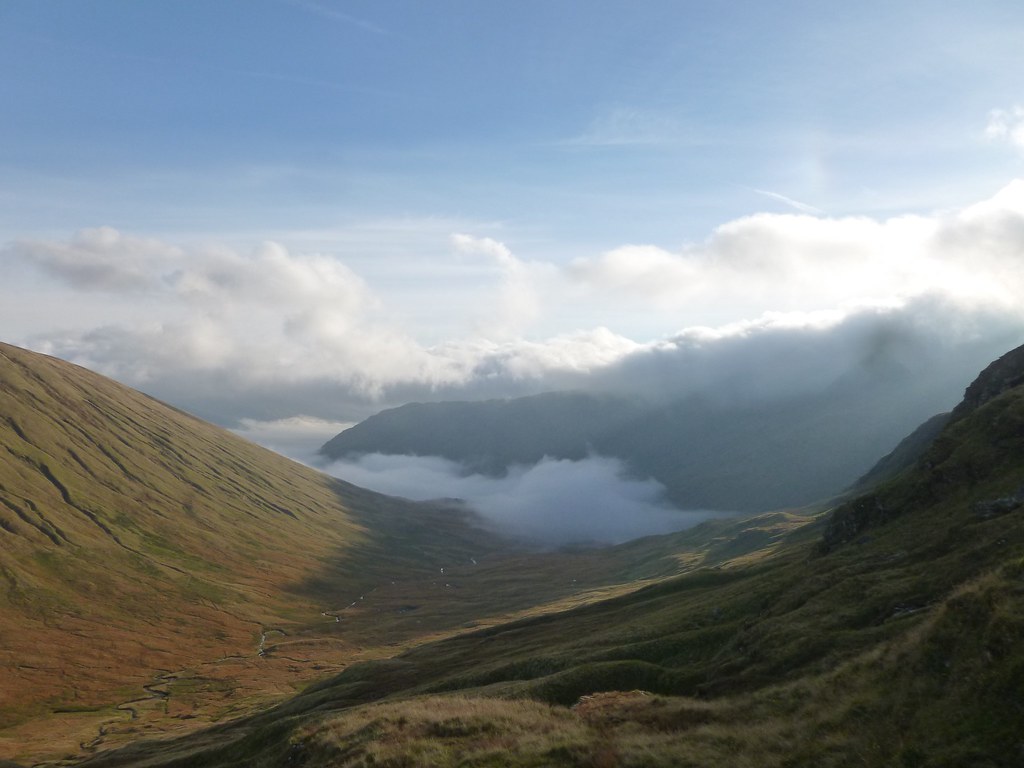 It was a long old slog up there and as I approached I began to see that there were a lot of cliffs above and the ridge looked tricky. I attempted to get to it, then went further along, following again what I thought was a path (incorrectly). I studied the map and thought there was a possibility I could get up the side of a crag but when I got there it looked impossible. At this point there was much anger directed at myself as I realised my mistake – I’d met the ridge much too far down and was going to have to backtrack. I crossed all the way back to the path up into the coire, trying to keep as much height as I could but also without breaking any ankles. I eventually reached the path into the coire and followed it. It was starting to get pretty warm – the sun was out and the views back down the valley were stunning. 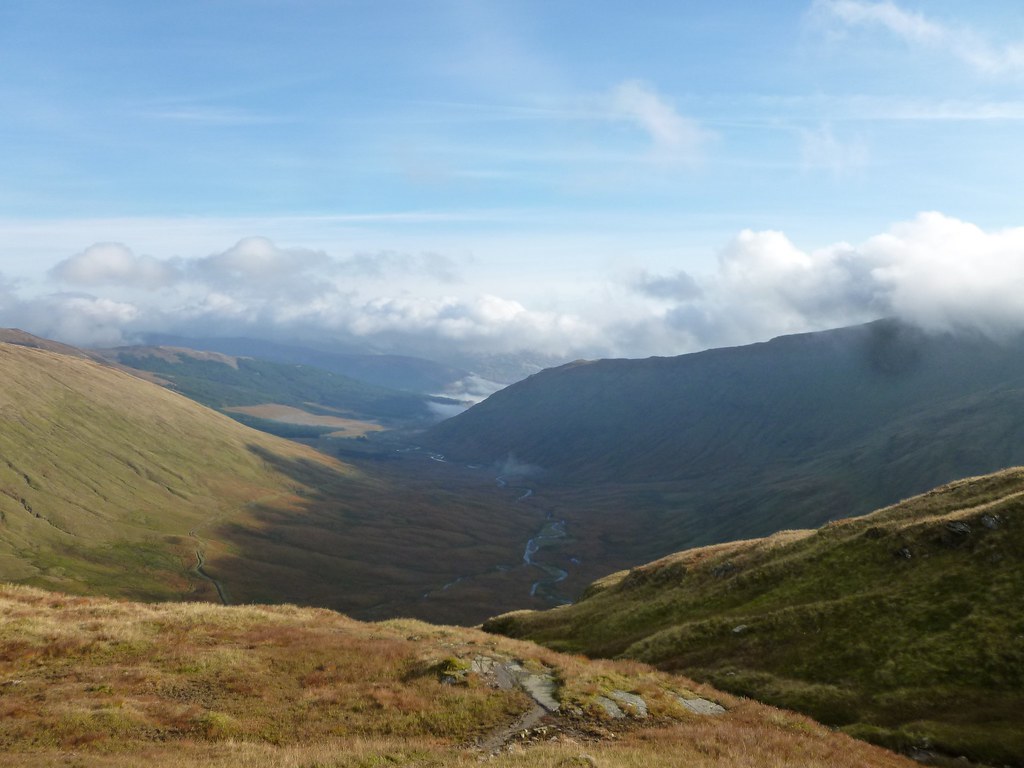 I trudged on, but after all the extra I had just done I was feeling pretty whacked. I noticed a big group of people coming up some way behind me – nice to know I wasn’t completely alone – and I carried on up. I took the path to the ridge (the correct one this time!) and it was very steep and I had the sun on my back too. Knackered, I gained the ridge and stopped for a breather. I noticed that the group had stopped in the coire, but past the point where the ridge path went off so wondered if they were going up the central gully! I carried on up the ridge, it was slow going, steep and rocky and I disappeared into the cloud sitting on Lui’s head. I reached the cairn, did a wee happy dance, donned my jacket, hat and scarf and grabbed a sandwich. I then kept going, and came to another cairn – the real summit. Oops

It was then that I made probably my worst error of the day. Looking at the map, it seemed that I needed to continue on a short distance before the path turned right towards Beinn a’ Chleibh. I think I took a bearing here too, but I don’t remember. Either way, I did it wrong. There was a path, I was cold, and I followed it. I eventually realised that I was going in completely the wrong direction. I'd made one of the most common errors - leaving a summit in the wrong direction. Visibility was almost zero, it was very cold, windy and I was completely lost. I hadn’t a clue where I was. I prayed for the cloud to clear (in vain), I got my phone out to see if I could get any signal on a map (there was none), I’m pretty sure I shed a few tears, before realising that I was completely alone and needed to do something or I would end up there for good. The only plan I had was to climb back up to the top of Lui (I at least knew the vague direction I’d come from) and slogged back up. It was agony, I was lost, cold, tired and pretty scared.

I reached the summit, again, and the group I had seen behind me had just arrived. Never have I been so glad to see people in my life. They were very friendly and we got chatting - they had come up the buttress - very brave! My plan was to give up and return the same way I had come up. My confidence was gone, I was tired and I had already got lost trying to find my next summit and had lost so much time I was never going to make the round in daylight.

However, the friendly group were happy to let me tag along with them – they were heading out to Beinn a’ Chleibh and then down to the bealach between Lui and Oss and back that way. I was thrilled – they were a lovely bunch and I had a great time – Beinn a’ Chleibh was not difficult now heading in the right direction and we even got a view from the top as it was a lot lower.

The group heading up Beinn a' Chleibh 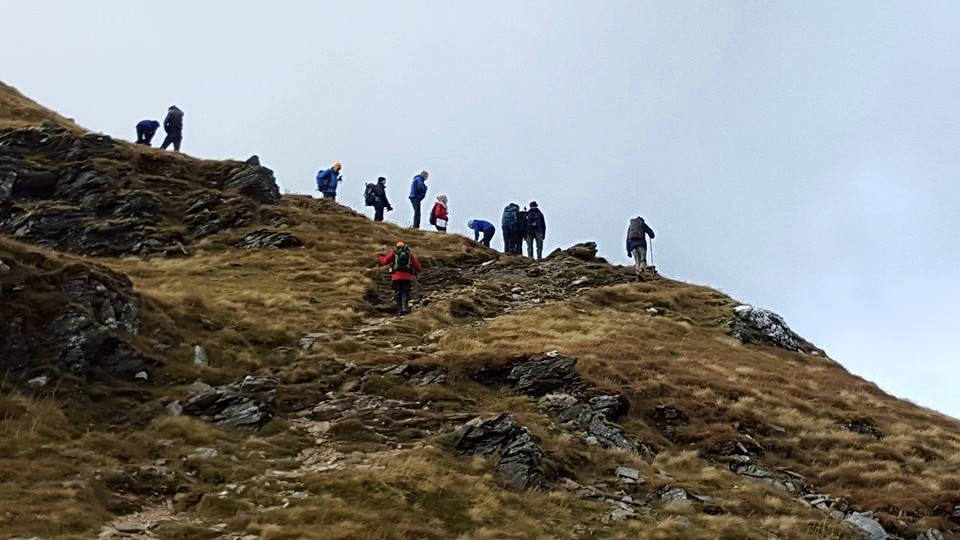 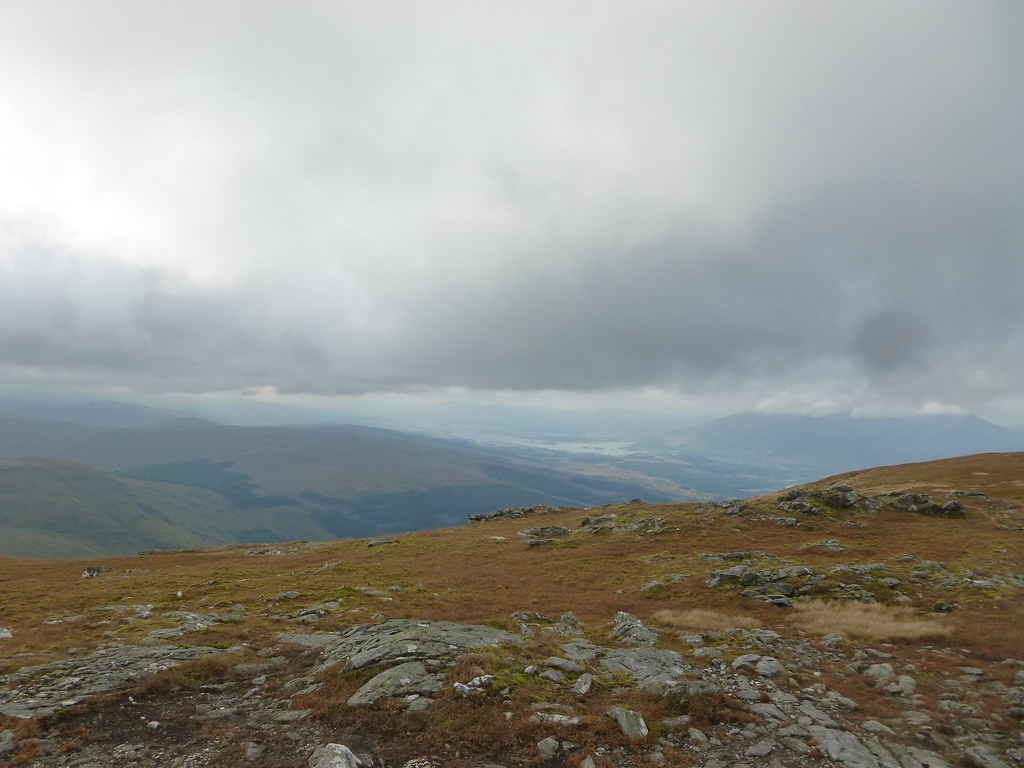 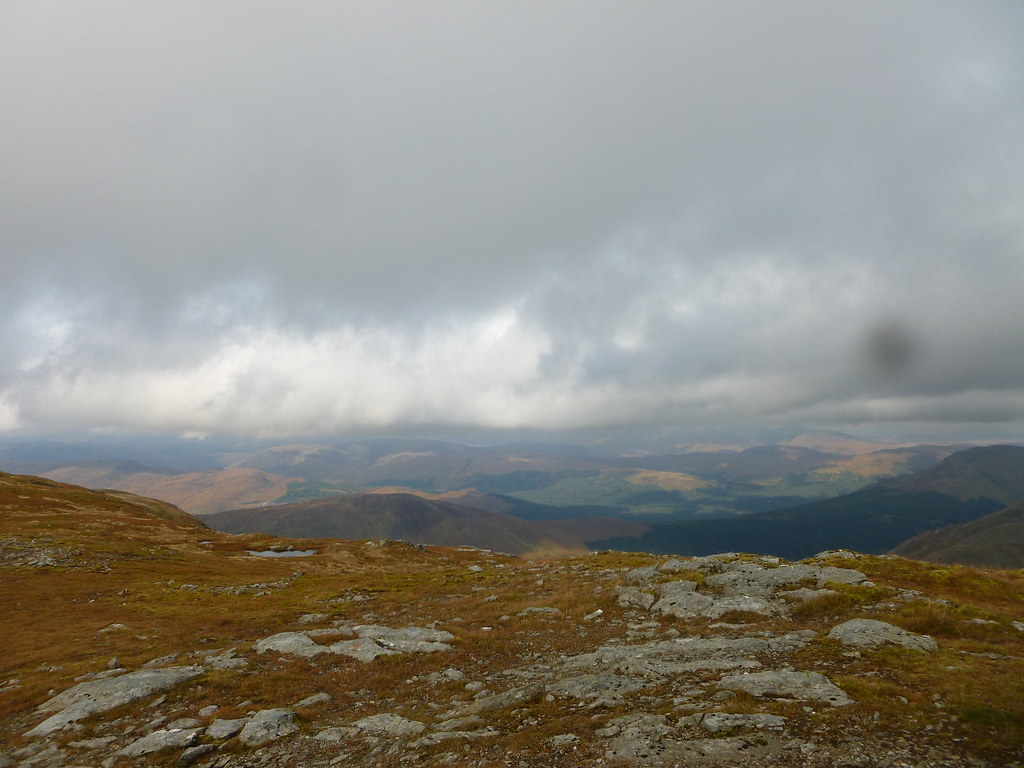 We then re-ascended Ben Lui (my third time there today!) before taking the ridge (which turned out to be the way I had headed by accident) down grassy slopes to the bealach then down to the valley eventually meeting with the track from Cononish. 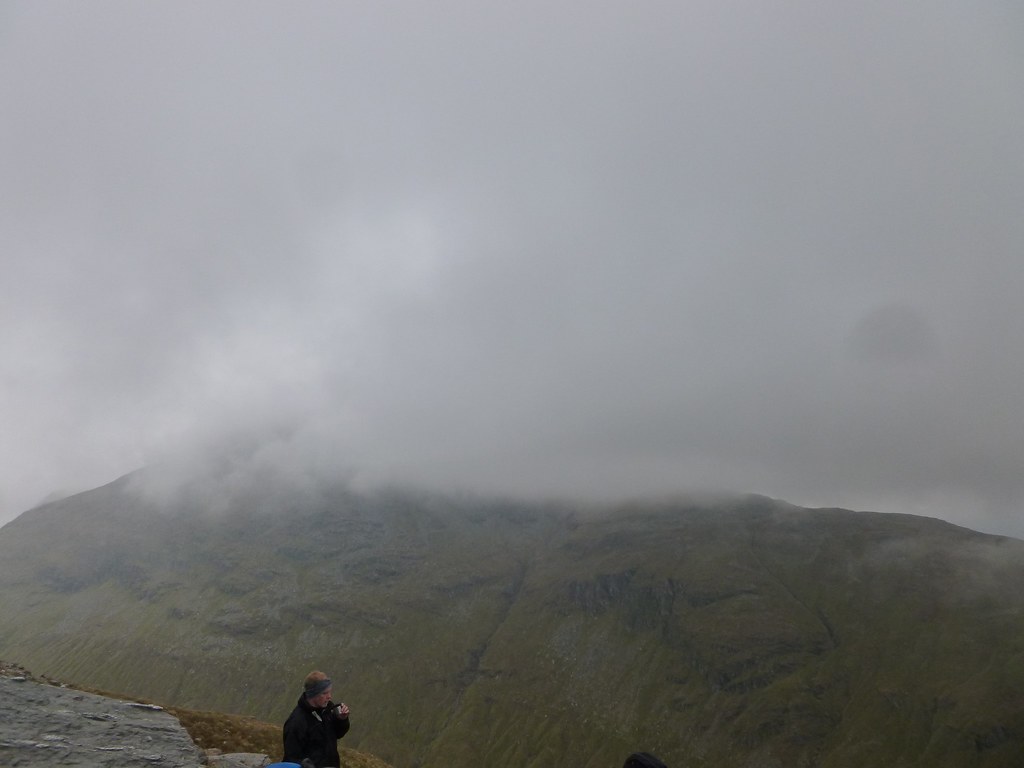 Just as we reached the track, who was to come walking up but my friend from this morning – he had managed to do the full round with the aid of a GPS so we shared stories and all walked down the track together.

Looking back to Ben Oss 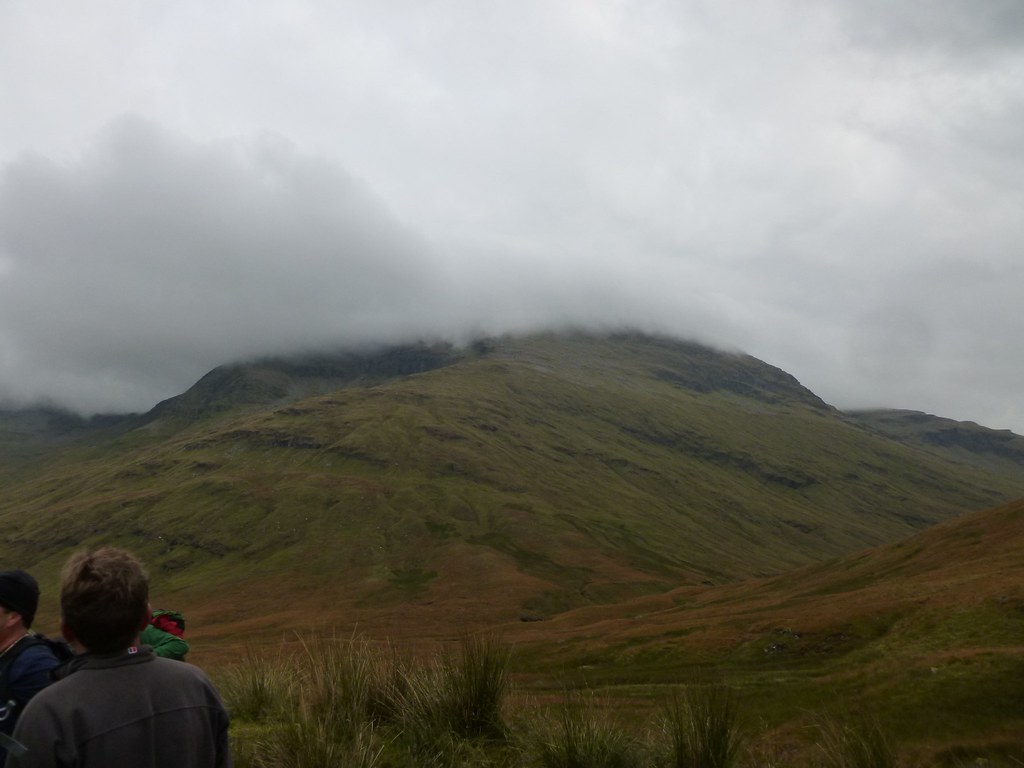 Back at Dalrigh looking towards Ben More 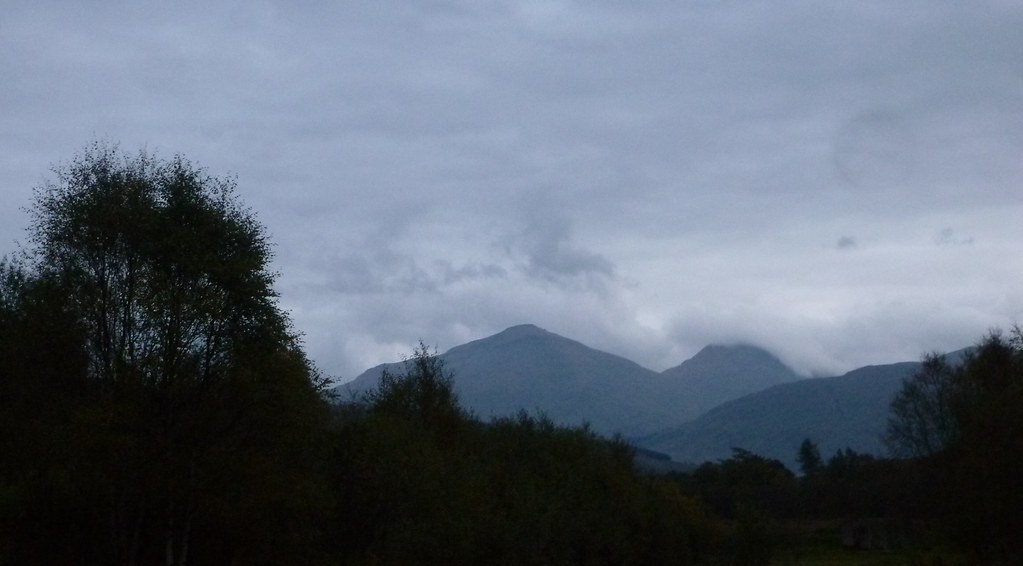 I had done a solid 10 hours of walking and was feeling my feet, my legs and muscles I didn’t realise I had. Despite my many many errors, I had actually had a cracking day! My thanks must go to the wonderful people of the Drover’s Tryst walking festival who so kindly let me join them and made me feel so welcome, pretty much saving my day. They are wonderful people and it was a pleasure walking with them. 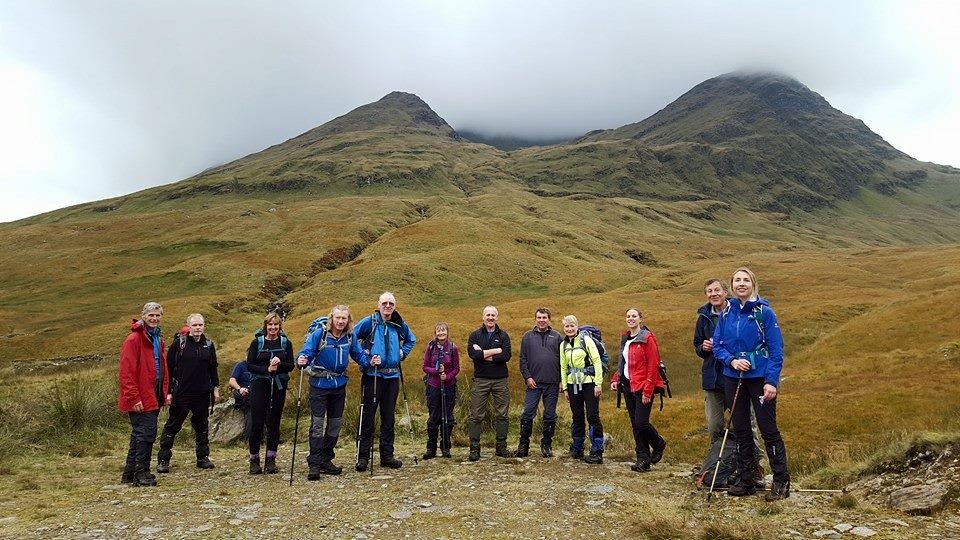 I have learned many lessons, one of which is that however much I like maps and don’t like to use technology in the wild, a GPS may be a good investment for days like today when visibility is zero (perhaps anyone might have recommendations?)

But also, I feel that I have completed the Tyndrum 4. I climbed Ben Lui 3 times and Beinn a’ Chleibh once. Surely that counts?!

This map shows how stupid I am!!

Jings - glad it all went well in the end. No doubt you'll learn much from this trip.
Pretty sure most of us have made mistakes at some point.......
we just don't always own up to them

so good for you for being honest - cheers

Oh its so boring when everything goes to plan

Yes - the day I climbed the same mountain 3 times! It's very funny now, and I had a great day afterwards. Hindsight eh

Well done on admitting your (easily made) mistakes and some good decision making!

Glad you had a smile at the end of the day and were not put off by it.
Not many admit to making mistakes in the hills, but will tell you all about there good days.