our_route.gpx Open full screen  NB: Walkhighlands is not responsible for the accuracy of gpx files in users posts
Set off at 7am and the fog was like pea soup,this continued through to Callander
where it had lifted but the tops of the surrounding hills were covered
Arriving at the layby beside Loch Earn at 8.10 looking up the glen the mist was thick I was confident that once i was on my way it would either lift or i would be above it
This walk i had to put off for the past 2 days due to work so i was now happy to be on my way
at 8.15,reaching the Allt a'Choire Bhuidhe footbridge i turned up the path still in the mist All around also was a fantastic inversion what a day 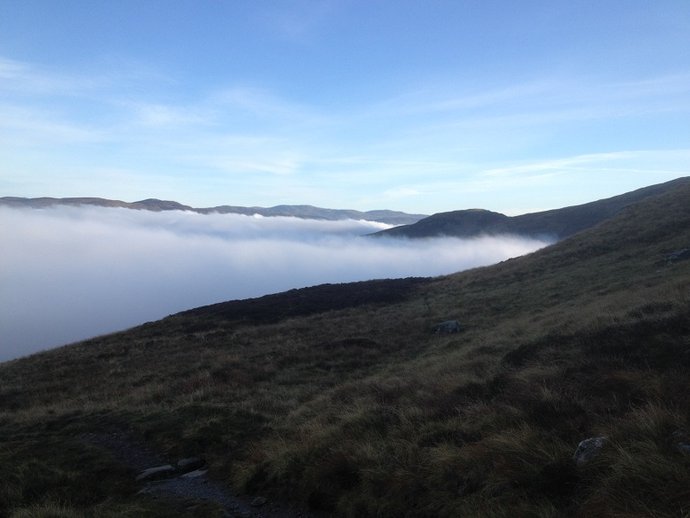 Looking over towards the Lawers range Jake having a look at Stuc a'Chroin Looking up at the Prow from the Bealach

I had a good look at the Prow to see what route to take and decided to head just to the right
of the head on approach,so it was onwards and upwards ,a couple of times
Jake needed a push up Shortly after arriving at the summit i met the first walker i had seen all day
a really nice guy who had came up form the Loch Lubnaig side
We both commented of what a great day it was and also how noisy the Stags
were all around also ,we left the summit then to make our decent the other lad
was heading on to do Ben Vorlich
So i left him and headed over to the left to the path that would take us down into
the head of Coire Fhuadaraich and skirt round the side of Ben Vorlich
I stopped here for a bite to eat and give Jake his snack as well Glen Vorlich in its Autumn splendour Hi Petr many thanks

A word of warning

the Lad I met on Stuc
who had walked in from Glen Ample on the Lubnaig side said that the whole walk in
was a bog ,said he was on his A**e more times than his feet

mamoset wrote:It's always a good feeling to walk out of the cloud and see an inversion

It certainly does feel good to get out above the cloud/mist ,unlike most of this summer
when I seemed to be walking in clag all day