Time for Jimbo and Jasper to get in another hike, after going our own ways once or twice. Usual predicament over where to go, where's weather best, etc, etc, but finally opted for something a bit nearer home, as I had something on at night. Downside was a 4.45 a.m., start

Not my finest hour!
Anyway, trip north to Spean Bridge went smoothly, other than just being sure we turned right, to rough track at Coire Choille Farm. We parked at a wooden sign, pointing right, towards forest, marked "Spean Bridge" though it would have been possible to go on another half mile or so, but this wouldn't be an advantage if you return by suggested WH route. After a few words with the minister, it is quite a long way in to the bothy, but there’s enough to see and talk about on the way. There had been someone in the bothy overnight, but had left some of their gear there. As it was, we bumped into him later in the day. By now we could see the ridge up to Stob Ban. Good enough track up, if a bit squelchy here and there. Wasn't long till Big Jasper was striding out ahead, which kept me sweating at full flow, trying to keep up. Took about 2.5 hrs to this point. Big Jasper, wonders why he took me along? 
Quick refreshment, photo or, two then we were on our way down the steep, scree slope down the north side of Stob Ban. Some nimble footwork required. Not the time, or place to be gazing around, or trying to take photo’s! Skipped round a wee lochain, then overtook a fellow from Dundee, who joined us on the summit of Stob Coire Claurigh, which stands at 1177m. From here the views opened up along the ridge, indeed in all directions. Just wonderful! Could that be Sgurr Choinnich Mor, away there in the distance? Surely naw! Stob Coire Claurigh, looking west to too many hills to mention :) From here we pretty much followed the WH’s route, stopping for photo’s, food and the occassional bit of navigation, but the track is fairly clear most of the way, just a bit tricky keeping tabs on which top you are on and which is next. Before long

we were at the third Munro, Stob Coire na Laoigh, which has impressive steep crags off to the right. Time to help the bothy man with a top up of water – maybe should have kept a little more for ourselves! Time for a pose! 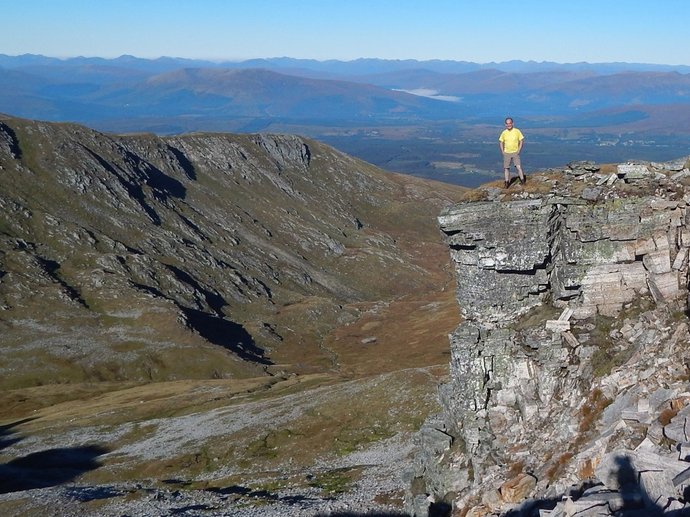 Think this was on Casteil, checking we had Stob Coire na Laoigh ahead. The pointy Sgurr Choinnich Mhor between the summit and Big jesper's map. From Stob Coire an Laoigh there is a bit of a drop, before rising to Stob Coire Easain, where we had to give some serious thought (ok, I don’t think it was too serious,) as to whether to go for the pointy, Sgurr Choinnich Mhor. My thoughts lay not so much as getting there, as to the fact, it looked like we would have to re-ascend Stob Coire Easain, before heading on the way down, as there was no doubt, my energy levels were beginning to suffer. In addition we had spent a lot of time gabbing and taking photo’s along the way. Maybe I didn’t really want to make it home in time for my meeting! South to Starav and Cruachan. Big Jasper, with Ring of Steall for a backdrop. Looking back up to Stob Coire Easain and Stob Coire na Laoigh, right.

Anyway, I think the round trip over to Sgurr Choinnich Mhor and back, took us about an hour and a half. Spent some more time chewing the cud, with an older chap, whose speed and stamina put me to shame. Superman? Why do these people appear and seem to make one’s efforts seem so inferior? Message to self, must get fitter! Jasper chews the cud with 'Superman?' A fit wee blighter, that's for sure. Over to the Buachaille Etive Mor. View back along the ridge and some eejit in the way :)

From Stob Coire Easain, we headed north down Beinn na Socaich, making up some time, though by now Big Jesper’s knee was playing up – war wounds apparently. Bit boggy on the lower reaches, as one gets near the edge of the forest. Jasper had been eyeing up return via the old railway, but I didn’t much fancy a further long haul over rough, boggy ground, so did my best to keep him to the WH’s advice. Just had to be a bit careful to follow route intructions carefully, as a few junctions need negotiation. Even then, it is still a fair haul, before we emerged, with our motor right before our eyes. Spot on. Eight and a half memorable hours. Perhaps, the best yet! 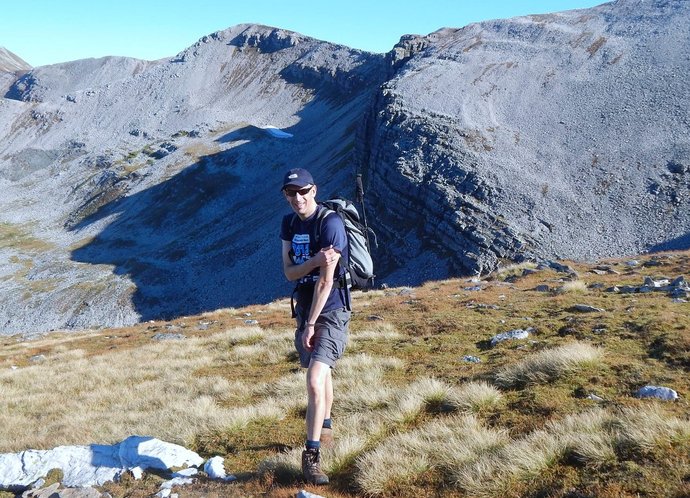 View of the 'back' of the Grey Corries. Don't ask me why they came up with that name!

We were a bit stiff and slow to change, but who should emerge from the woods, on his bike, but Superman. I had always thought he was just a make believe, comic character! Soon back to Fort William, which was shrouded in fog, but managed wee stop-off in Orchy for a shandy and still made my meeting at night! Good going, the old codgers!

I did exactly the same route in August. I thought 9 hours was good going but you pair beat me hands down.

Cracking day was Oct 1st. I was golfing in shorts that day . Might be a few Octobers before that happens again

Good to see the views I missed when I did it in September this year in mist and wind. Guess I'll just need to head back to them in good weather now!

Couldn't have chose a better day

and maybe a better walk too

I hope for a similar day

Hahaha a brilliantly written report that had me chuckling all the way through! Amazing photos as well.

The main thing to remember is that the tortoise gets to enjoy more of the view at his leisurely pace compared to the hare and superman bagging summits at top speed!!

Those look like some brilliant hills and ridges to walk, looking forward to doing them myself at some point thanks to your report. Cheers!

I don't suppose you found a camera on Ston Coire Claurigh, did you?

I mislaid mine, full of the days pics, when I was up there last month....

Jimmy, another great day, great report, fab pics and yeah probably the best one yet.

Wow, what views! Looks like a great day out. Must do these soon, have only done Stob Ban, in deep snow.

Alteknacker wrote:I don't suppose you found a camera on Ston Coire Claurigh, did you?

I mislaid mine, full of the days pics, when I was up there last month....

Sorry, Alteknacker, can't help. Have done the same myself, though. Luckily i got mine back.

Thanks all for rest of comments. Was a great day round these hills and fingers crossed for many more

Good effort gentlemen and a good report Jim with great pictures in there.