I was looking for a nice 1/2 day route in the fort Augustus area,which would offer some challenges do great views, and from the reviews this seemed to tick all the boxes - I was not disappointed! I had to confess I was also attracted by the name - so many puns to chose from!

As I'm (stupid enough to be) training for a marathon at the moment, the dreaded "long run" took over the bulk of Sunday morning. Actually I had a lovely run along the Caledonian canal from fort Augustus and then across the bridge and down the side of Loch Oich to Invergarry. It was incredibly beautiful, and again I became mesmerised by the stunning reflections in the quiet still waters. Anyone thinking of trying this route as a walk or cycle, I'd highly recommend. By the time I got back, showered, changed and had eaten a second breakfast (so my favourite meal of the day!), and packed the car it was after 11. Fortunately, the drive down to Kilfinnan is only about 15-20 mins. As it happens the car in front of me turned into the single track road at Laggan Locks, so I had someone to follow all the way in. If you are by yourself though, you won't miss it, as there is a large farm where you need park. When I I got there, there were already 4 cars parked and so the other car and I made 6.

As I'd had such a short drive, I'd travelled pretty much ready to go, and so after lacing up my boots, and swinging my rucksack onto my back I was off. There is a helpful sign to point out the way, and there is a vague path to follow - straight up the hill, through the brown bracken and grazing sheep. The route is a good workout from the start - there's no gentle incline to warm you up, it's straight up a stiff climb. There is a path to follow mostly, but if you lose it just head uphill best you can and you'll be fine. Stopping to admire the view (aka take a much needed breather), I was astonished how much height I'd gained so quickly, and the views down Loch Lochy were stunning in both directions. Friendly sheep on the first climb Having a breather - looking back on the car park Having another breather - admiring the view down Loch Lochy

Breathing almost back to normal, I soon found a well trodden path which heads west roughly following the contour of the hill and tracks round the head of Kilfinnan Burn. There is a stile to cross - it still looks dilapidated, but someone has "helpfully" broken open the adjacent gate, so only the truly adventurous need to dice with death. The path continues to the west, easy to follow, but a bit boggy at times. If you look ahead, you know have some stunning views of Ben Tee's distinctive shape and the size of the challenge to come. The stile and gate with Ben Tee in the background

Eventually the path peters out and you have to cross some moorland up to the east side of Ben Tee. If visibility is good, as it was today, you won't have any problem seeing where you are going. It's deceptive, however, and it took longer than I thought to climb up this section. The ground wasn't too wet, squishy but no danger of your ankles getting a mud spa treatment on every step. I found it hard work, and got pretty hot and sweaty. Mind you the moor did look beautiful, although the heather had finished there were still wonderful flowers in bloom nestled down nearer the ground and the spaghnum moss added a lovely autumnal hue. I startled 2 ptarmigan that flew off protesting loudly. In trying to get my phone out my pocket for a photo, I missed my step and managed to slip down into a particularly boggy section. No harm done, but mucky trousers for the rest of the day. 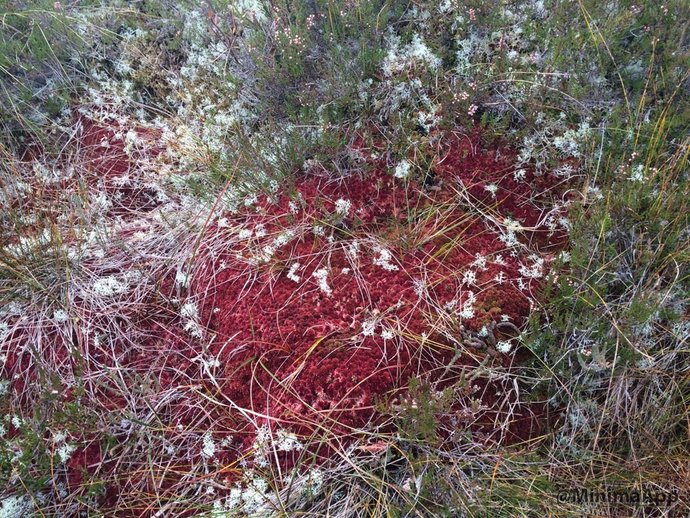 I finally made the path which leads up the east face of Ben Tee. I had climbed a fair distance west across the rough ground, so joined the path reasonably high up. I noticed several others were making their way up from lower down, which may have meant less time crossing the rough bit. I stopped for a quick drink and a handful of Haribo, and to ogle the incredible vista that had opened up across Lock Garry and towards the Knoydart area. Looking back to the east, I could now see Loch Ness glinting in the distance. View across to Loch Ness

Having joined the path so far up, walking up to the top was relatively easy and uneventful. It is steep, but felt easy compared to walking across the ground, didn't have to focus on watching you step or where you are going, so plenty of chance to look around and drink in the views. Reaching the cairn at the top and being able to see all round was honestly breathtaking. The visibility was really good, and you could see a 360 vista of incredible mountains and lochs. In the distance you could even see some patches of snow on Ben Nevis. Cairn at summit, plus Ben Nevis in distance

Having wowed over the view, and tried out the panorama function on the camera, I chose a favourite sheltered vantage spot, overlooking Loch Garry, and enthusiastically delved into my bag for some lunch. Although there was very little breeze, it was chilly enough that I was glad to have down jacket and woolly hat to wear. I didn't tire of the view, but did start to get cold, so 15mins later I started heading down. I saw 3 people at the top, and 4 others on their way up. No exactly Ben Nevis but it was more than I expected for this route.

Downhill was uneventful. If the visibility is good, you can see where you are going, so there's no navigation needed. The rough ground needed a bit of concentration, but was much less exhausting to cross in this direction. In what felt no time at all, the stile/gate was in sight, and I could pick out boats speeding up and down the loch below. The final bit is steep, especially if your knees are feeling a bit ancient by this point, but there is plenty of bracken and heather to cling onto, and it is only a very short stretch, and then you are on the grassy track down through the sheep and back to the car. On the way back, looking down on my car, it looked out of line with the others, and I had a sinking feeling that I hadn't put the handbrake on properly...fortunately it didn't seem to have moved when I finally reached it and checked, I must have just parked badly...but it certainly speeded me up on the way down the final hill!

A quick change in the car out of my mucky togs - very pleased I'd bothered to throw some travel clothes in, even though it was only a short journey back - and I was on my way. As I drove back to Fort Augustus, I reflected that this had been one of the most enjoyable walks I'd done. Not the highest, longest or anything else-est; but for sheer enjoyment, feeling you are out in the wilds, truly incredible views, and still being home in time for tea (or in my case the rugby World Cup match) it is hard to match. If you haven't done it, you must. If you have, you know what I mean!