Atholl a' Ghlo with autumn colours

Atholl a' Ghlo with autumn colours

Corbetts included on this walk: Ben Vrackie, The Sow of Atholl


A promising weather forecast for the third weekend in October for Scotland and a Friday off work had me booking two nights at the Bridge of Tilt Hotel near Blair Atholl. This was to be the first time I'd seen the Highlands with autumn colours, and I wasn't disappointed.

On Friday morning I was driving up to Scotland from Yorkshire for the sixth time this year, and by afternoon I was passing Blair Atholl and parking at Dalnaspidal - time for a quick ascent of The Sow. The Sow of Atholl from near Dalnaspidal The Pass of Drumochter from The Sow of Atholl After descending, I looked at Meall na Leitreach and realised I would probably have had time to add it. but I'd not planned for that and hadn't mentioned it to my 'responsible friend', so I went back to the car, and on to Bridge of Tilt to check in.

Saturday morning began frosty and foggy around Blair Atholl. The short uphill drive to Loch Moraig saw me climbing out of the inversion. The car park was already nearly full when I arrived before 9:00 am. Soon I was walking towards Carn Liath. The ascent was fairly steep but nothing too difficult on a clear path. The summit was reached before too long, with views of the rest of the range opening up. On Carn Liath, looking back to Loch Moraig Leaving Carn Liath, looking on to the rest of the Beinn a' Ghlo range

The ridge ahead looked impressive as I moved over Beinn Mhaol. The way ahead from here was clear... ...the fine weather meant that navigation via Bealach an Fhiodha presented no problems. After a bit of a climb, I reached the day's high point, Carn nan Ghabhar. To avoid any issues with deer stalking, I made the return over Airgiod Bheinn. This was a nice top, and gave an impressive ridge descent. On top of Airgiod Bheinn After a fairly long and, in places, boggy walk out, Loch Moraig came back into view. I'd met a walker from Glasgow on the later stages of the route. She'd walked all the way from Blair Atholl to the first two Munros, but had run out of time before the third. So I gave her a lift back to Bridge of Tilt.

Sunday began without frost or low level fog, but the sky was cloudier. However, I could see from my hotel window that Ben Vrackie's summit was clear. I checked out, drove through Pitlochry and arrived at the well-sign posted 'Ben y Vrackie' car park near Moulin. The first stage of the walk was through attractive woodland. The trees were displaying the lovely autumn colours I'd been hoping to see. Ben Vrackie from the woods above Moulin

This was a most enjoyable walk on a pleasant October day. I didn't really need a rest, but spent a couple of minutes on the seat by Loch a' Choire; a beautiful spot. Then followed the quite steep pull up onto Ben Vrackie, with an easy, distinct path all the way. The summit had great views. 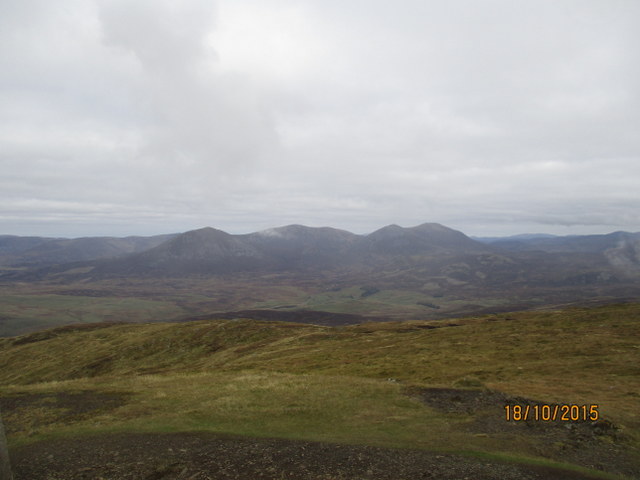 Beinn a' Ghlo from Ben Vrackie

Ben Nevis and the Glen Coe mountains were visible in the west despite the cloudiness. After leaving the summit and returning to the loch, I continued the walk via Bealach na Searmoin, a worthwhile detour on the way back towards Moulin. The final descent was very attractive. Within about a couple of hours, I was back in England. That was my shortest ever visit to the Highlands so far, but a very worthwhile and productive one.

Excellent report and pics Simon ,I am looking forward to doing these hillls
since I was up that way doing some work looks like the weather was good for you as well

Beautiful colours of the fall

It was another fantastic weekend, can we have one more please?...

Accidentally, I did all of these in winter/spring time with snow covering the tops. So nice to see them, especially B Glo, in "nostalgic" autumn mood.

Looked a great trip. It's always a treat to get some decent hill weather in October. Beinn a' Ghlo is surely one of the finest massifs in the Grampians - distinctively shapely in so many views, and the three Munros make a fantastic walk (it is quite a trek back from Airgiod though isn't it?). I did the same walk back in March 2009 with much deep snow on Bhalgain but a denuded Carn nan Gabhar covered in thick verglass. Thought I was going to get away without using crampons until that point.
Great report & photos - nice title btw!

Well done Simon for packing so much into your 'flying' visit

Will be in touch regarding next years plans

Cheers James, you should enjoy these hills when you get to them.

Thanks, BlackPanther, I've seen these hills under snow, the conditions when I did the rest of the Munros around Atholl and Drumochter. The area looks great then, too.

Cheers dav. Decent, dry weather, even with a bit of cloud, can be really beautiful in October on the British mountains.

Thanks, Martin. I forgot to mention the two nice drams of single malt I managed to pack in as well. Looking forward to 2016.

If I’m lucky I get two trips in up north and you’re on your 6th this year!
Lovely autumnal pictures. Beinn a’ Ghlo is my favourite hill in that area. Great you had good weather for it.

Cheers rockhopper. Vrackie is a lovely little hill; you should enjoy it. The last bit up a stepped path above the lochan might be a bit steep to cycle.

Silverhill wrote:If I’m lucky I get two trips in up north and you’re on your 6th this year!
Lovely autumnal pictures. Beinn a’ Ghlo is my favourite hill in that area. Great you had good weather for it.

Thanks Silverhill. Funnily enough, I have just returned from my first trip of the year down south - beautiful autumnal scenes in Kew Gardens at the moment. I agree, Beinn a' Ghlo is a fine mountain.

Lovely hills these - especially in the weather we've been having lately.