After my failure at the Tyndrum 4 last Wednesday, I decided that I would use my last day off to complete the four-some. My plan was to walk all the way along the path, up the bealach in between Lui and Oss, up the shoulder, across to Dubhcraig and then either down the boggy path if visibility was poor or head down to Cononish Farm and along the track if I could see where I was going. I was going to stick to the plan and not do anything where I could potentially get lost again. I wanted my second trip down Glen Cononish to be simple and enjoyable. 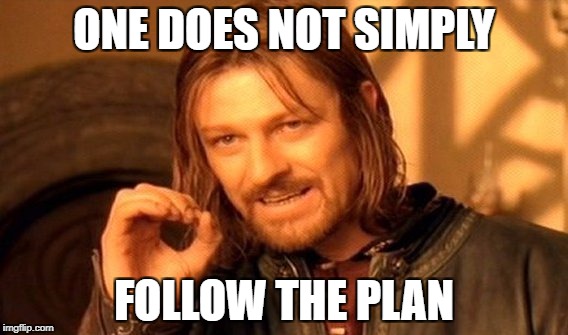 I arrived at Dalrigh and set off at 7.35am, it was still slightly dark but the walk along the track was not difficult. The skies were clear and I could see for miles, it was a good start. 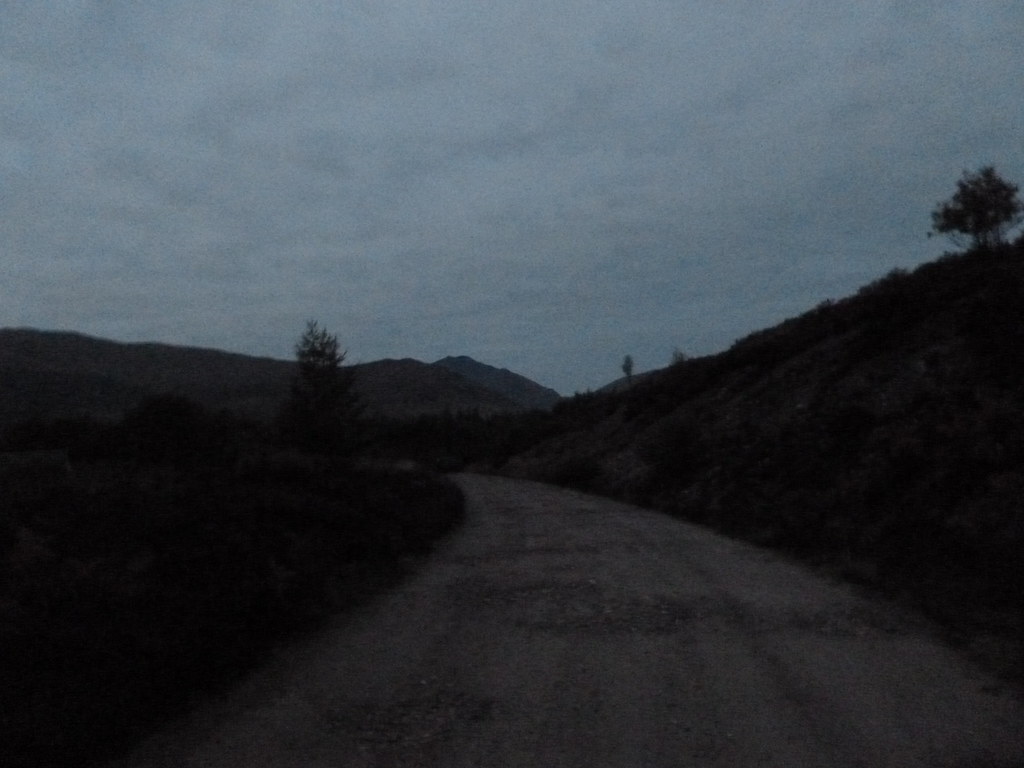 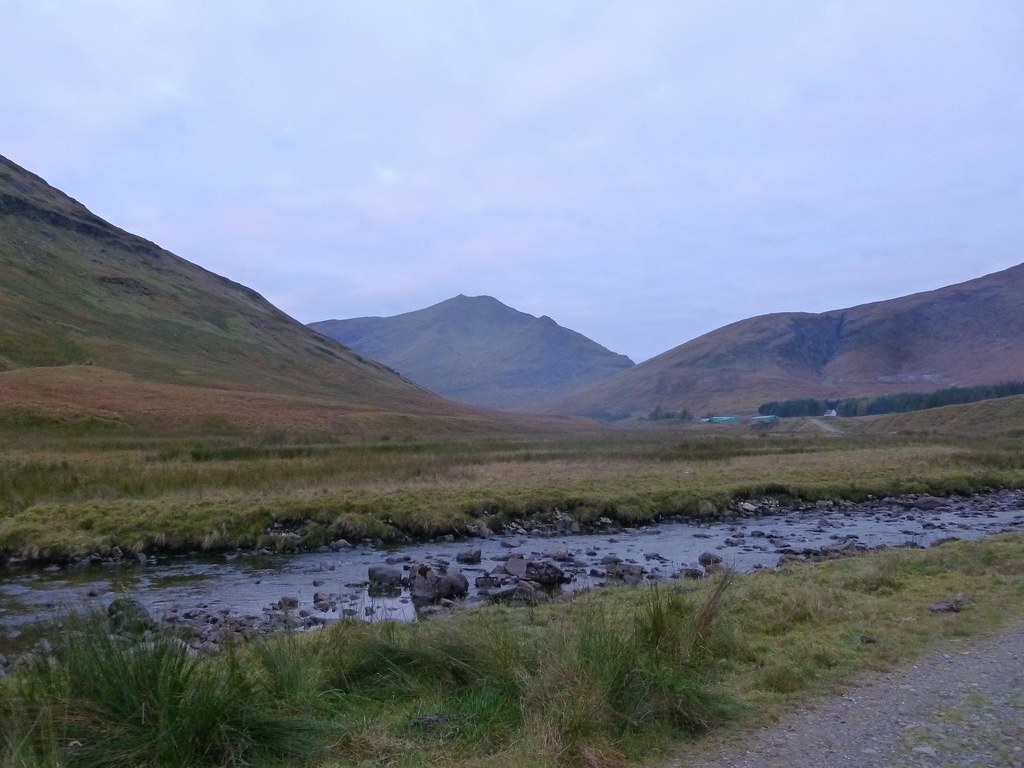 The weather for the early part of the morning was good, intermittent cloud from around 10ish and then closing in about 1. As I walked down the track I was treated to spectacular views of Lui and could see almost my whole walk.

It was at this point that I thought “wouldn’t it be nice to get up Lui in good weather” and I mulled this over as I approached the Farm. “Stick to the plan” I told myself. I passed the farm and then decided to throw caution to the wind. I walked down across bog towards the river, crossed a deer fence (it was already fallen down!) and then sloshed my way through a bog and limbo-ed my way under a fence and I’d reached the river. Here I discovered why everyone describes Dubhcraig as the bog by which every other bog must be measured. Even on the higher slopes it was squishy and although my trousers got pretty wet, the Scarpas kept my feet dry! 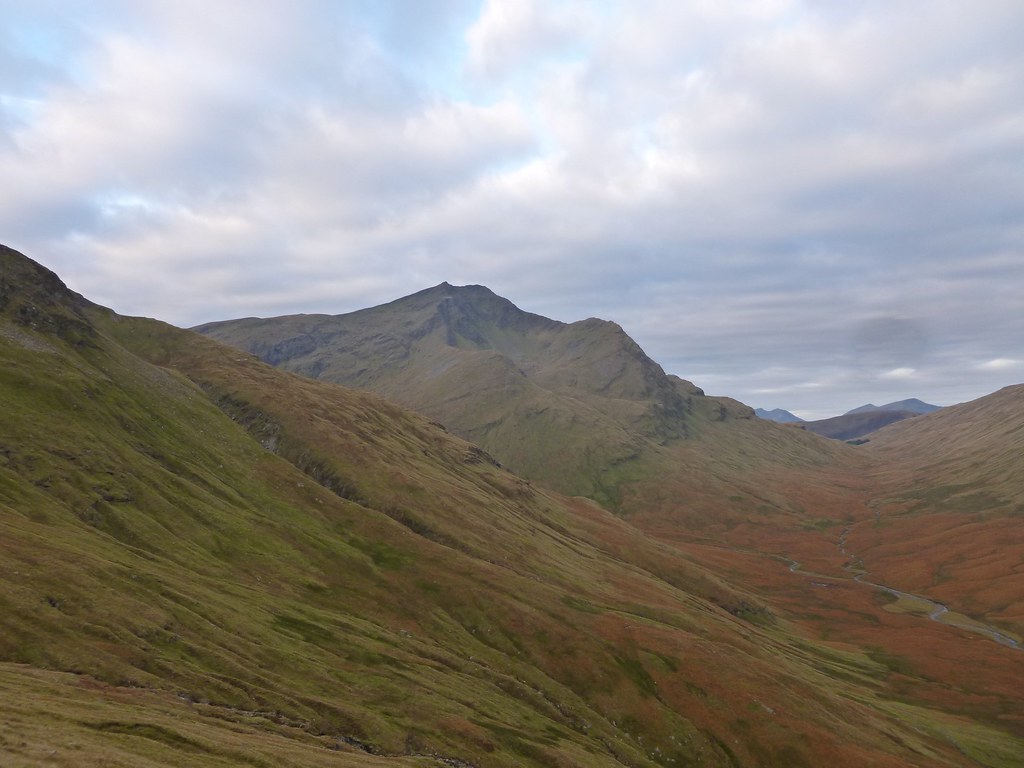 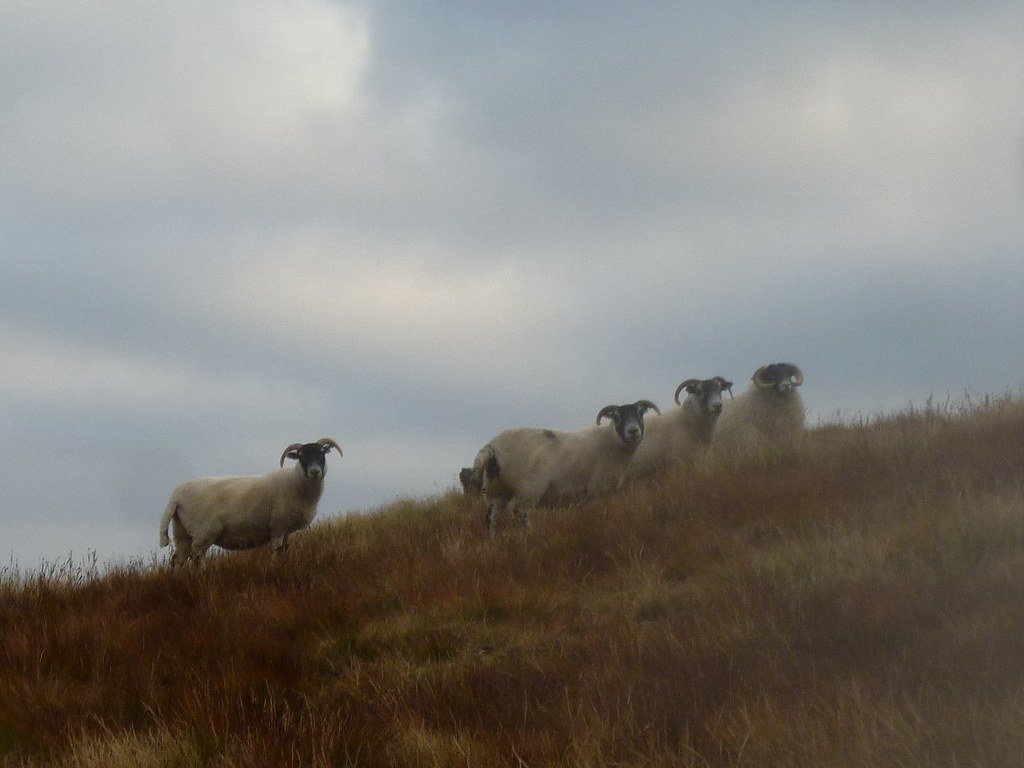 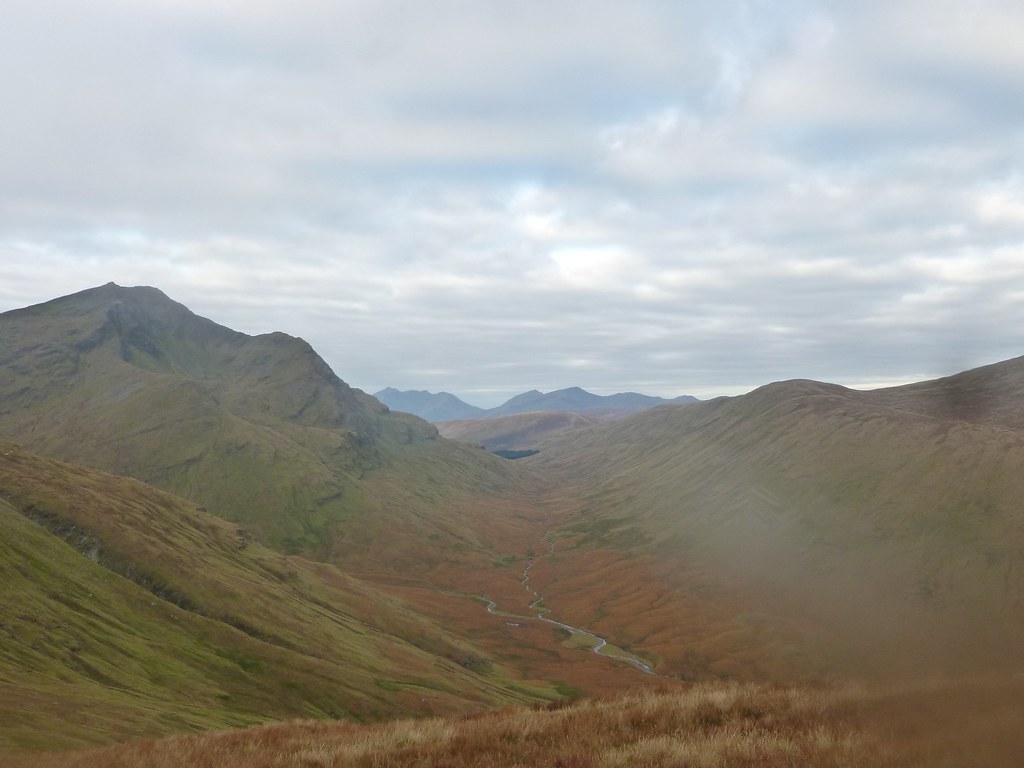 I meandered my way up the grassy slopes towards the Dubhcraig ridge where I found a path leading all the way past the wee lochans up to the summit. 9.50am, not bad. Cue absolutely stunning views down Loch Lomond, of Oss and Lui and everywhere else. Too many photos to choose from here.

Lui in the sun 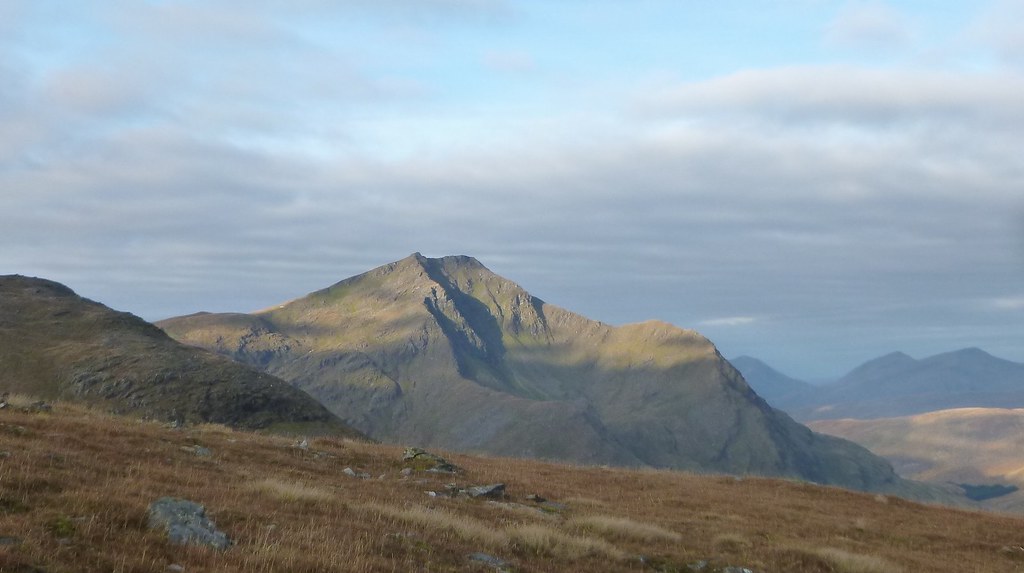 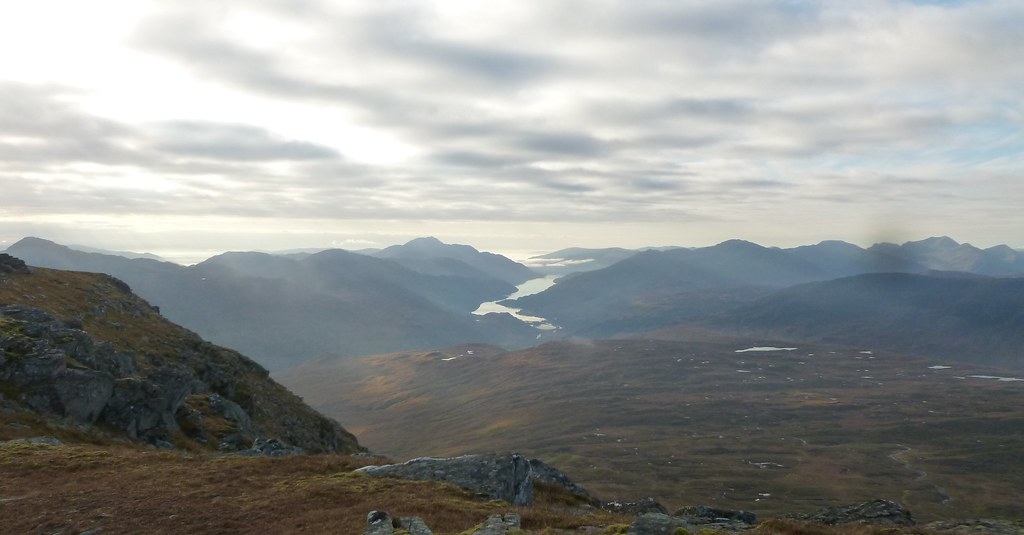 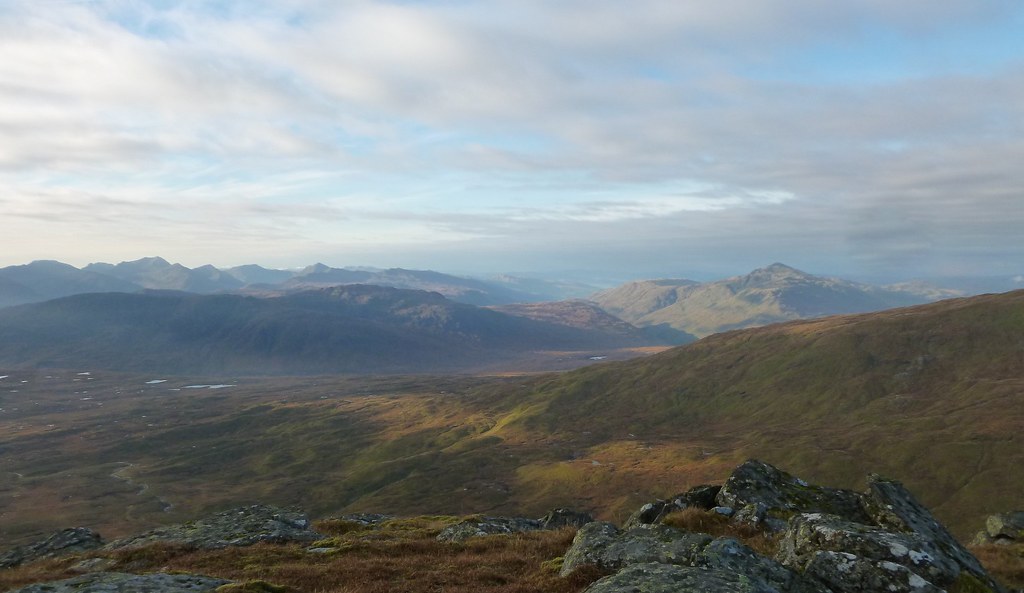 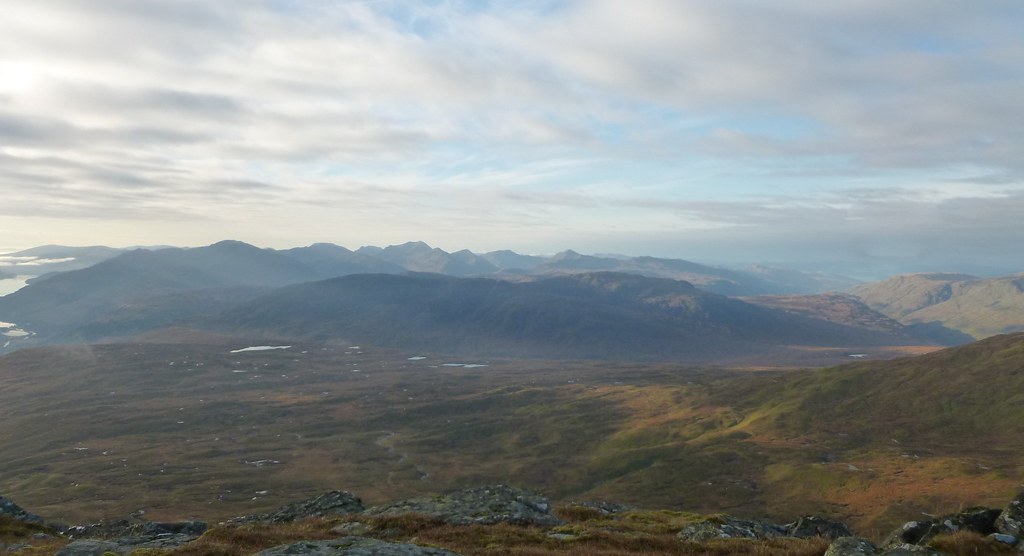 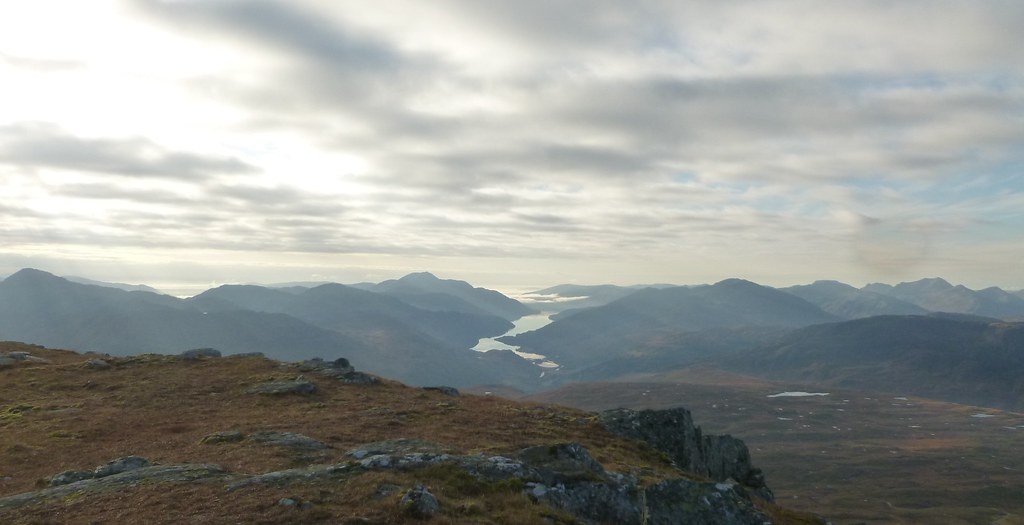 Before the days of the Jaxter pose 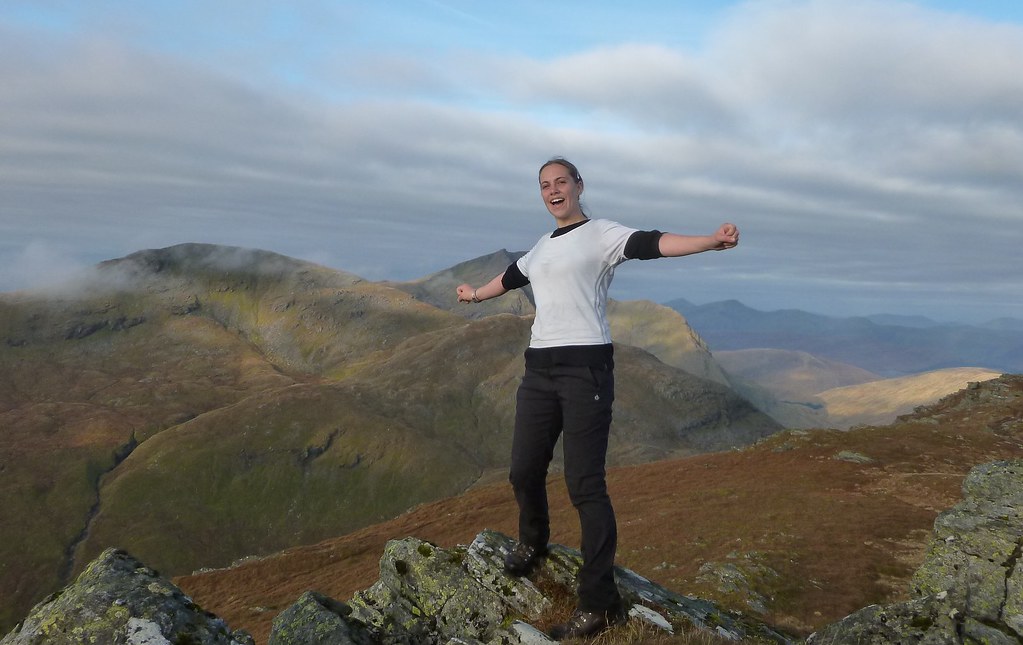 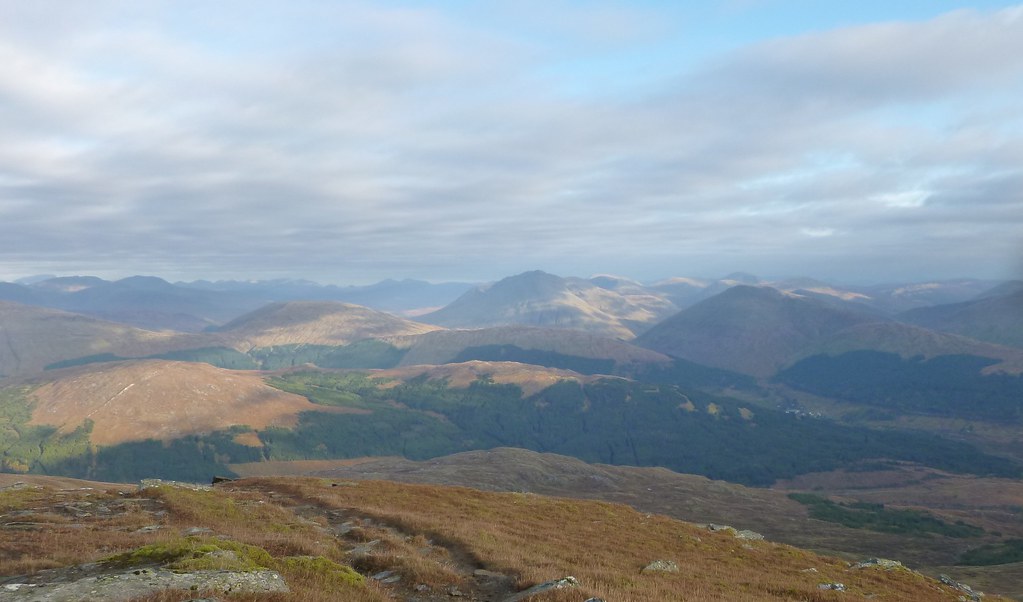 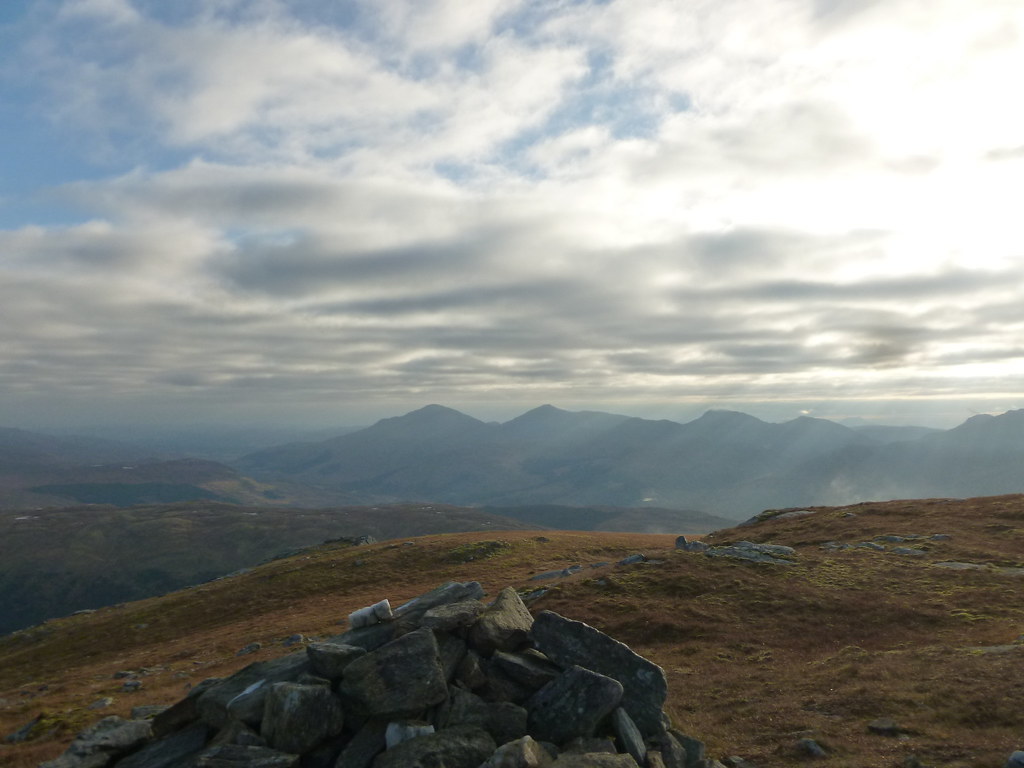 Two minutes later the cloud descended and I beat a hasty retreat. Headed back down to the lochans and followed the path up Oss. 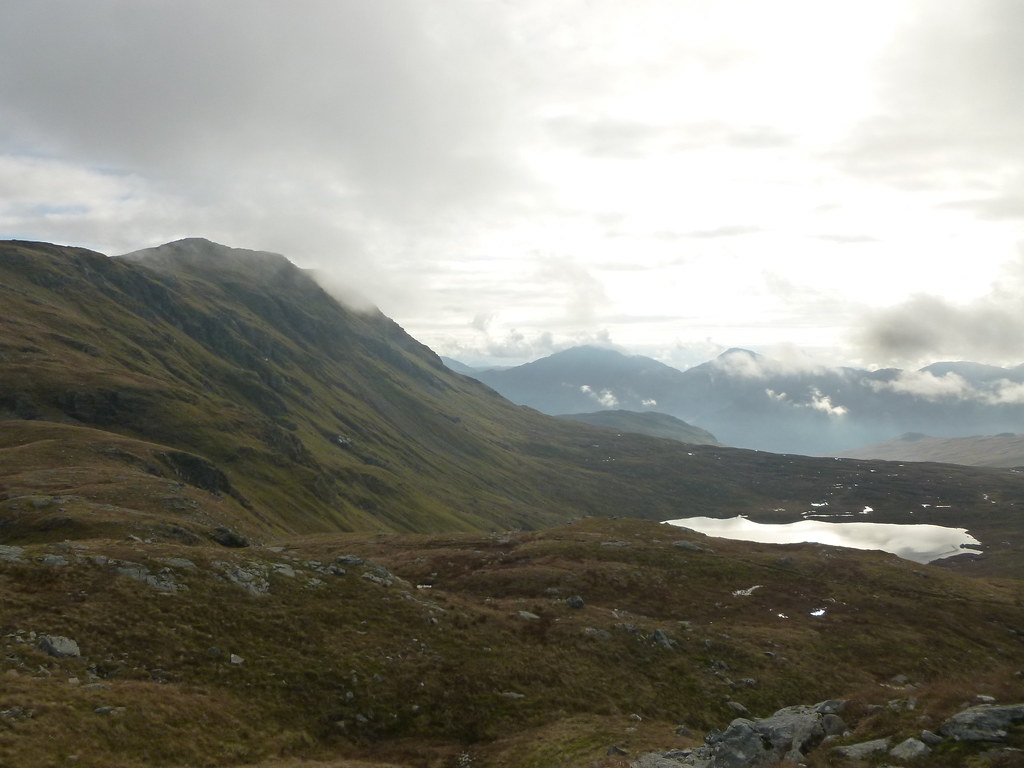 The main path seemed to go straight on which I thought weird, I followed a less obvious one up the ridge into the cloud. I was keen to avoid this walk report becoming “Lost on Lui Part II: Lost on Oss” As I climbed the cloud was intermittent and although I eventually reached the summit in the mist, it quickly cleared giving me amazing views over to Lui. 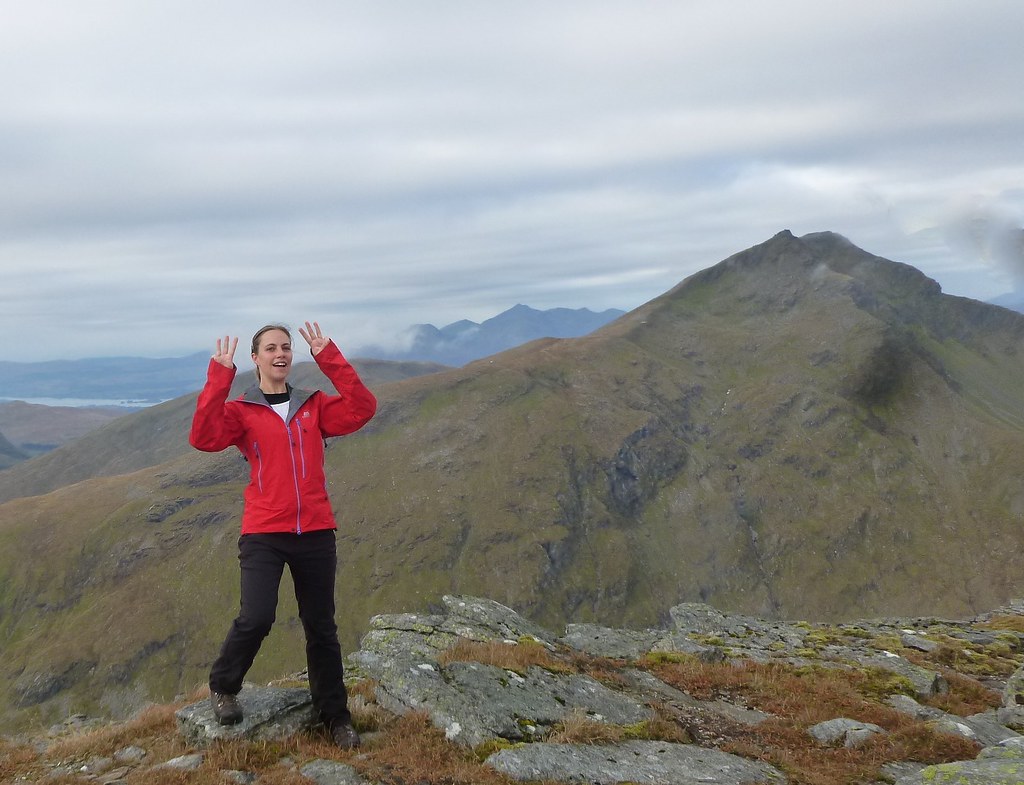 Wee bit of cloud blowing around 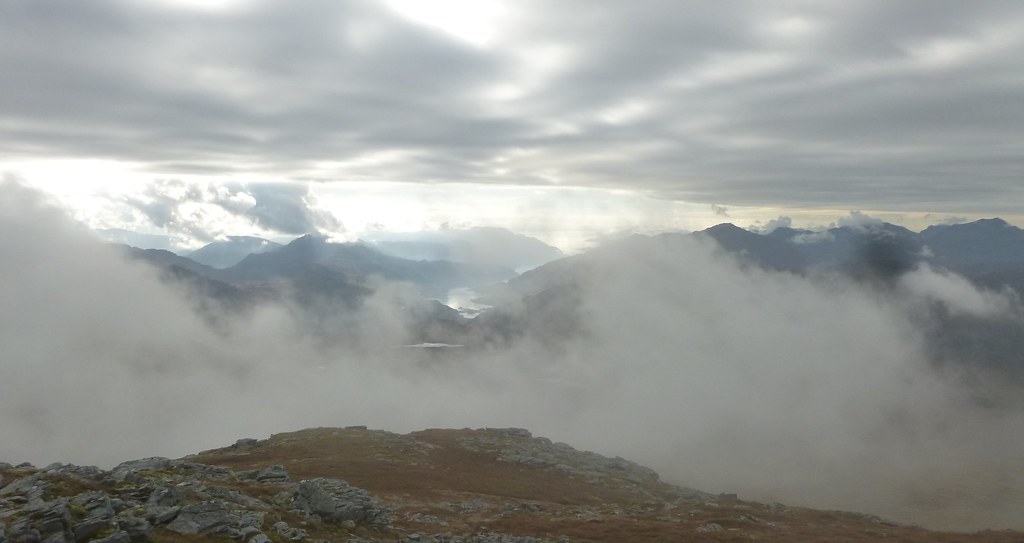 Lui from Oss, calling to me 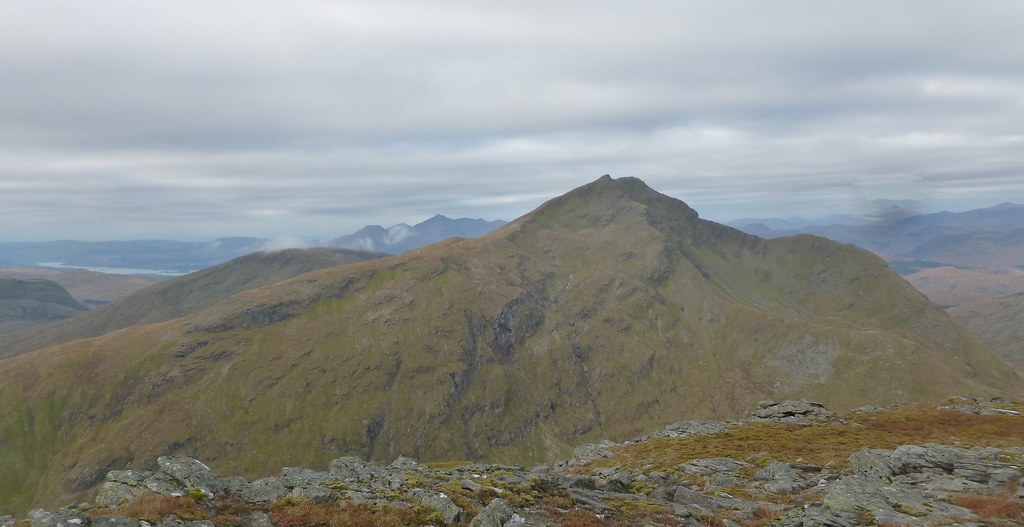 It was only just after 11 so I decided to climb down the other side of Oss to the bealach, at which point I could assess the weather, the time and my legs to see whether I wanted to climb up to the summit of Lui for the 4th time this week….

All the way down, the views were incredible, Lui looked clear and I realised that I was always going to go up. I started up the grassy slopes and followed a vague path most of the way. My legs started screaming at me very quickly but I pushed on fuelled by the remains of my Lucozade and the thought of a view from the top.

Looking back at Oss from halfway up Lui 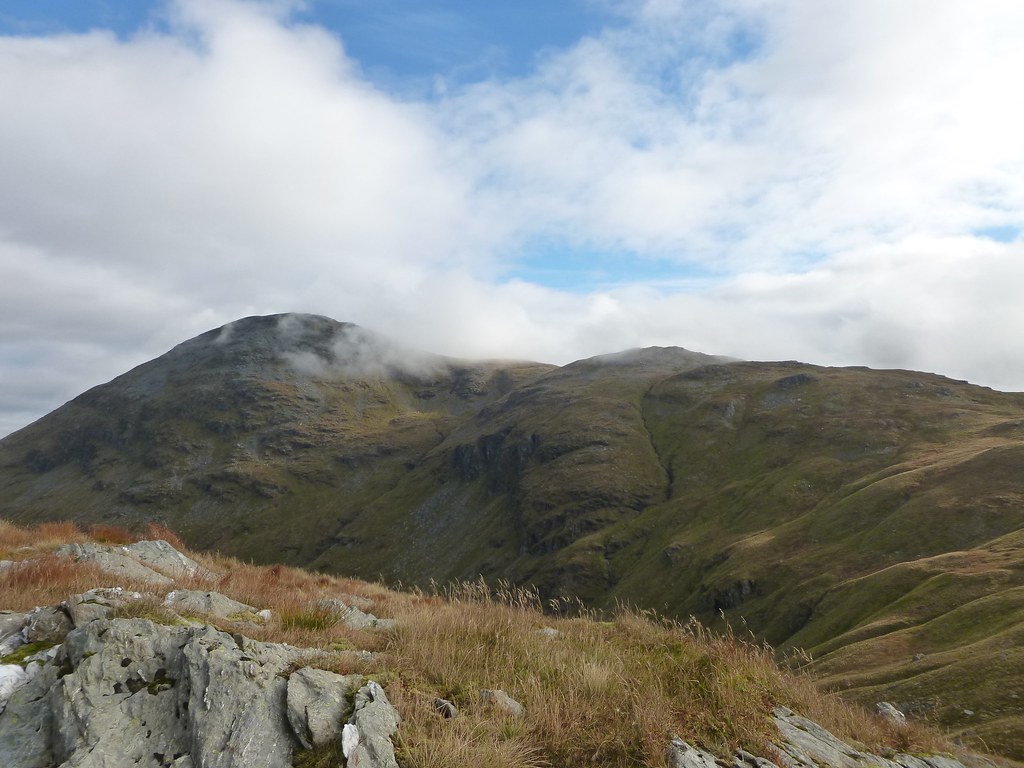 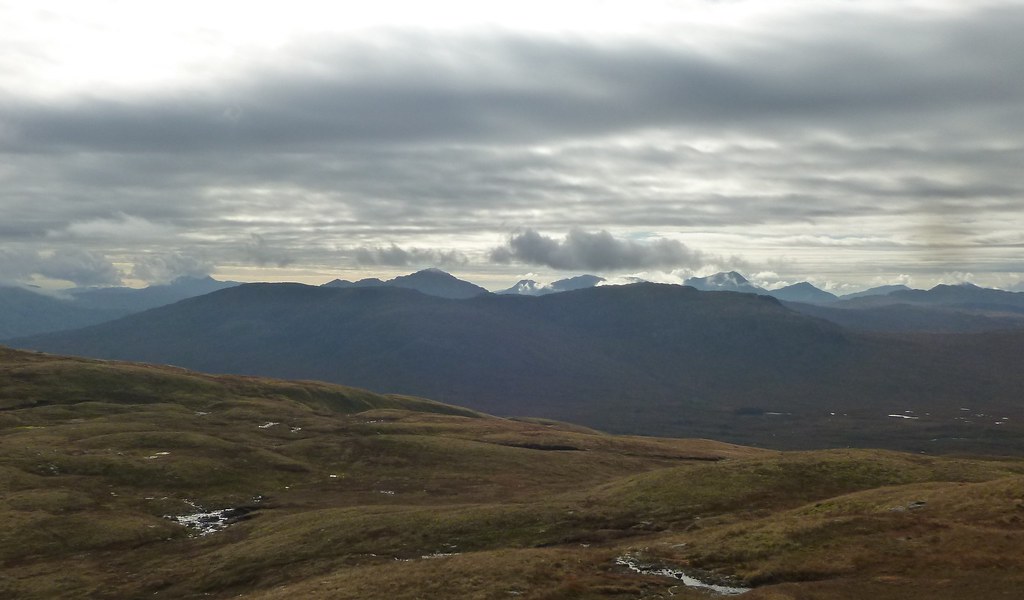 I started up the final rocky bit and in came the clag, not just cloud or mist but full on clag

I reached the summit cairn in a white out, the identical view to what I’d had on Wednesday. I was pretty annoyed and waited around a few minutes in the hope that it might clear but it soon became obvious that the weather was here to stay 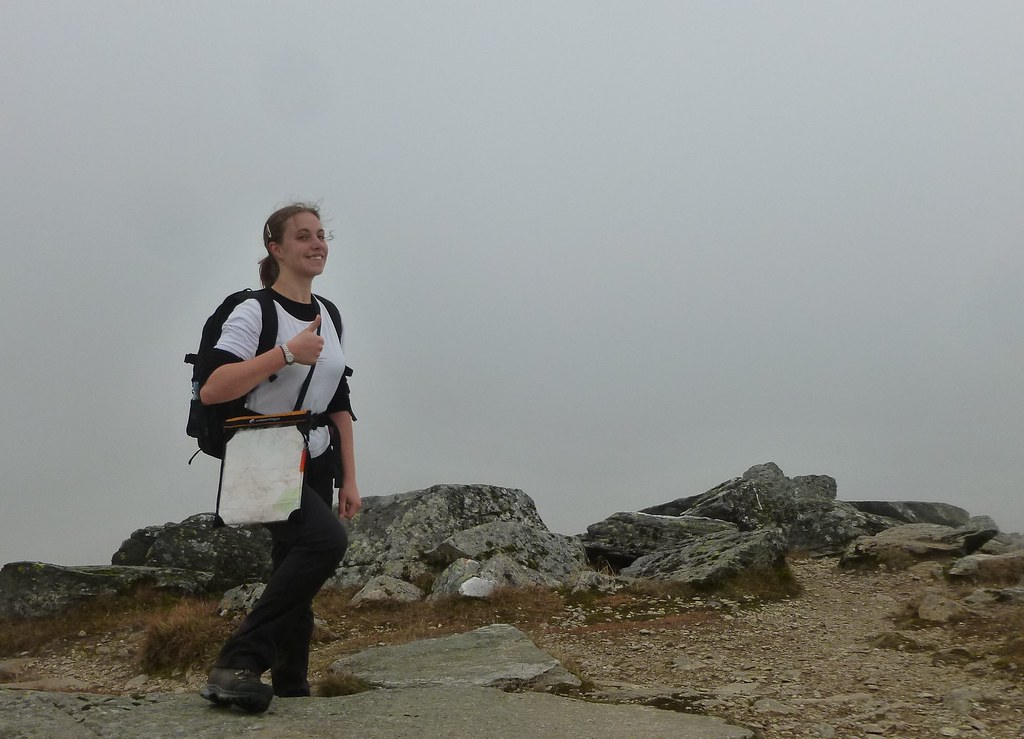 It was cold and there was no view, so after deciding that Lui really didn’t like me, there was nothing to do but head down. I headed for the ridge - it seemed insanely steep and slippy at the top

It hadn’t seemed so bad before but I had come up it last time! 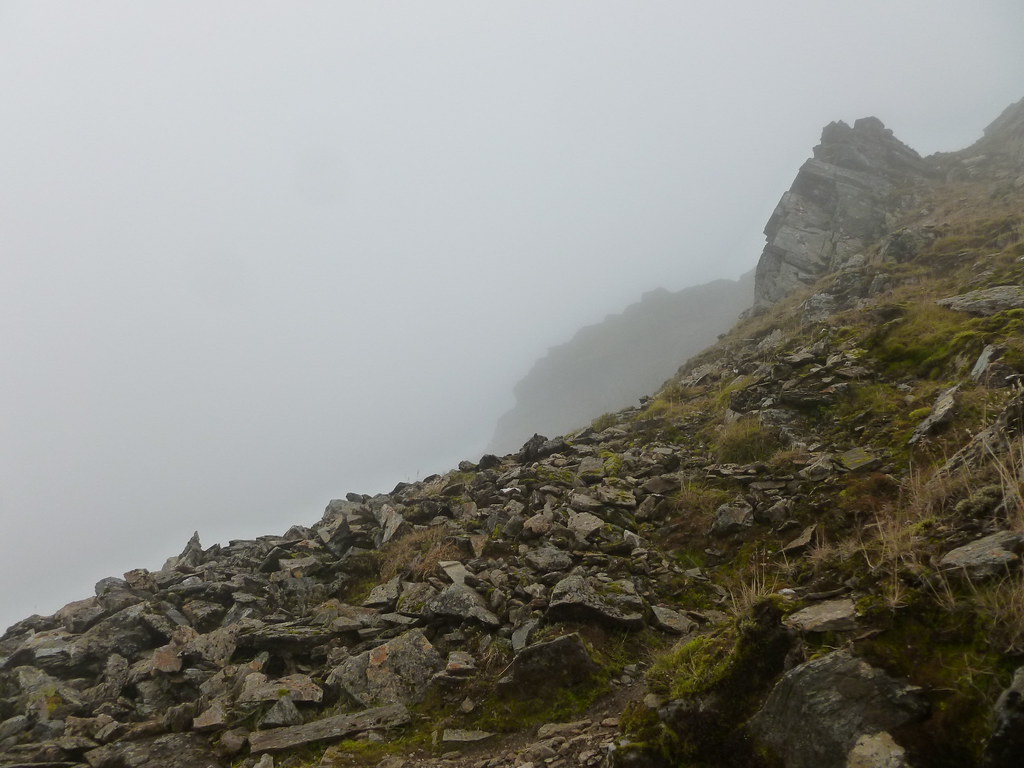 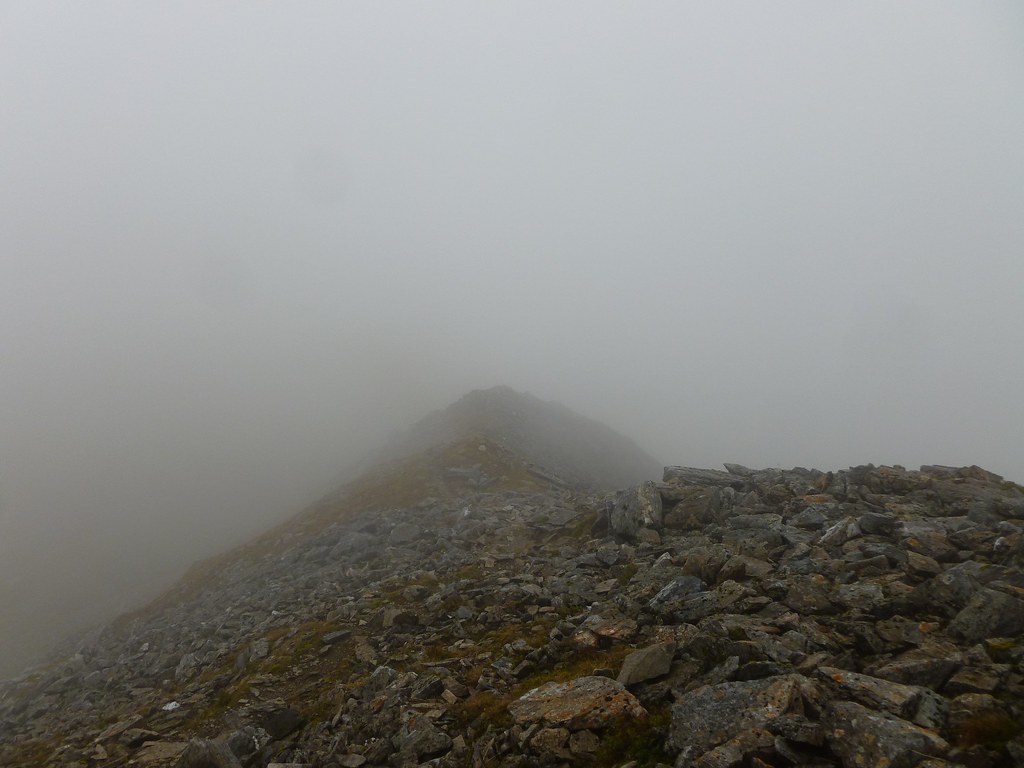 Eventually I came out of the minging weather at the top of the path into the corrie and, after shedding a few clothes, headed down. 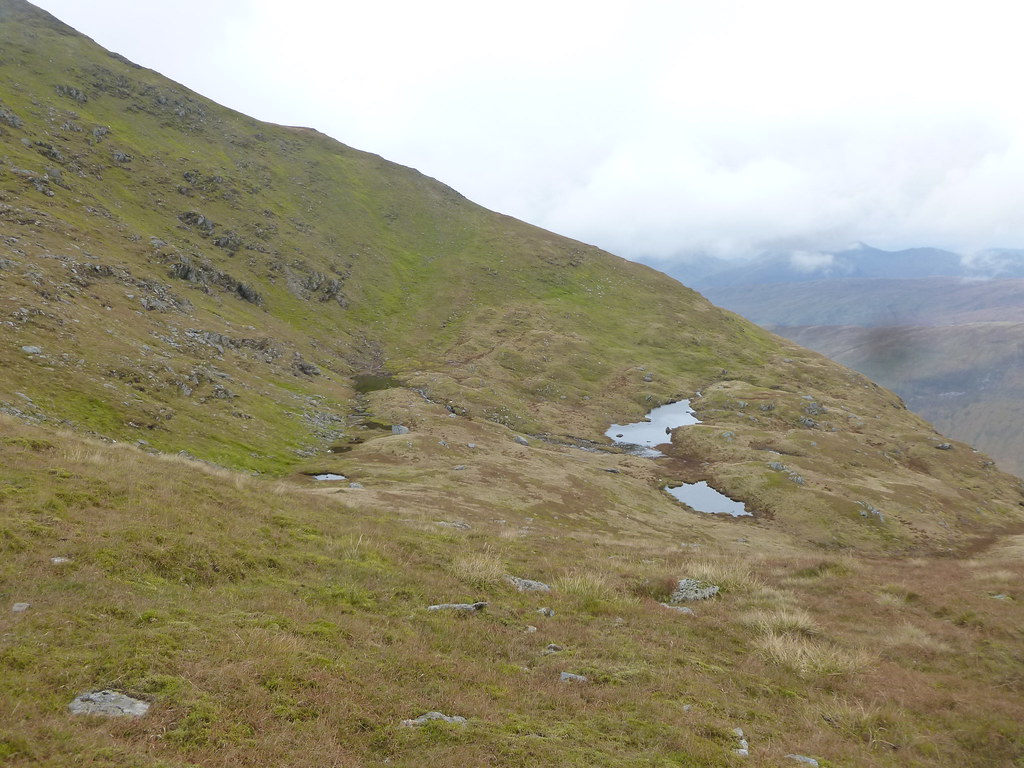 Finally clear of the clag 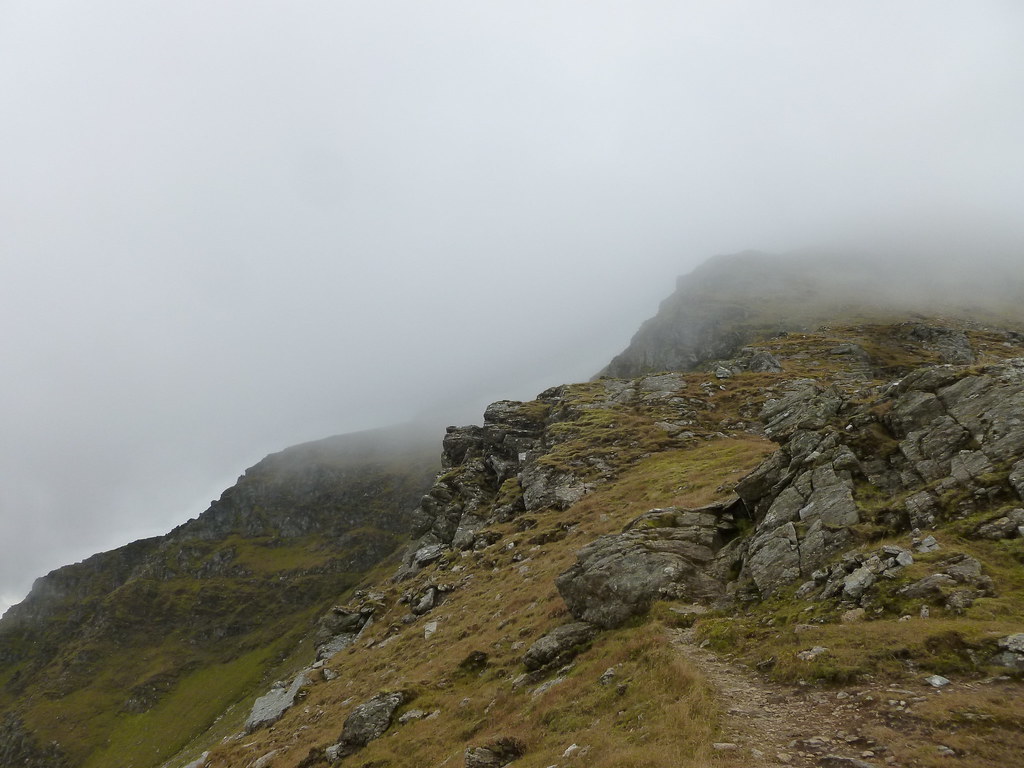 As I reached the corrie, I could see that every other mountain in sight was clear 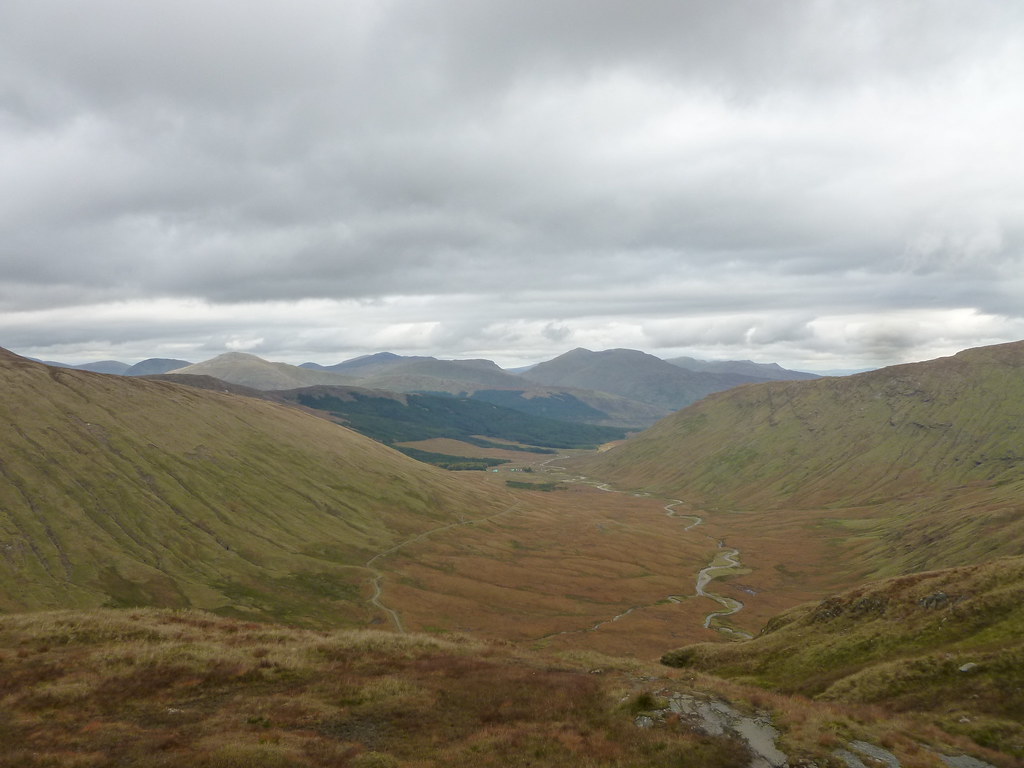 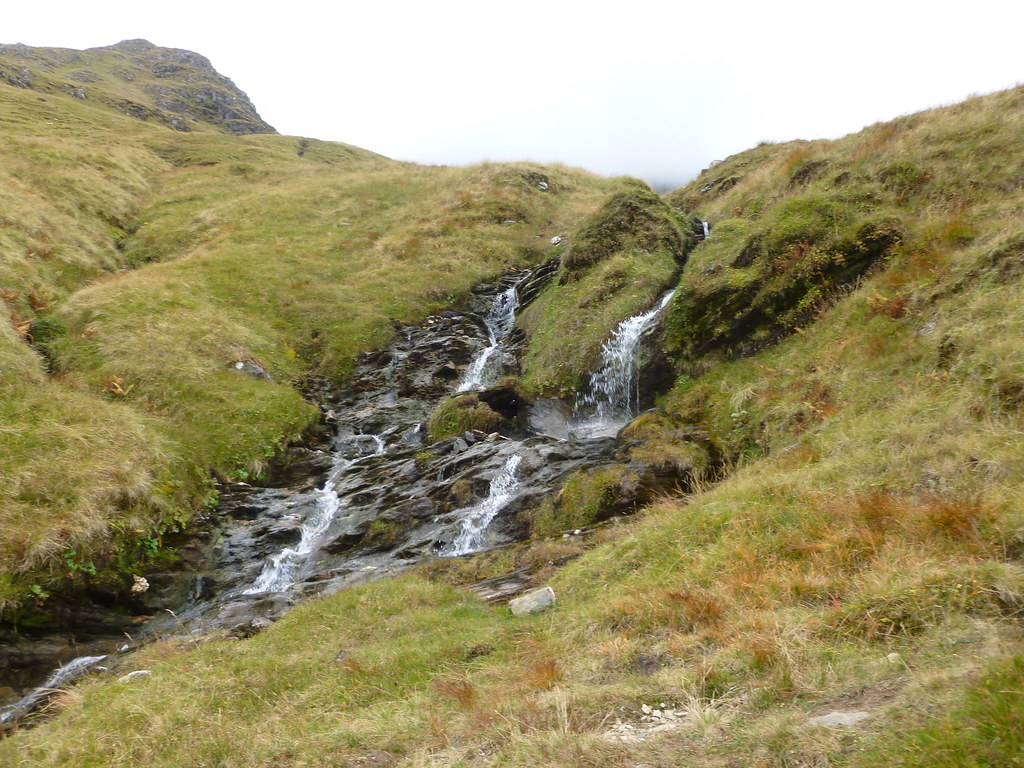 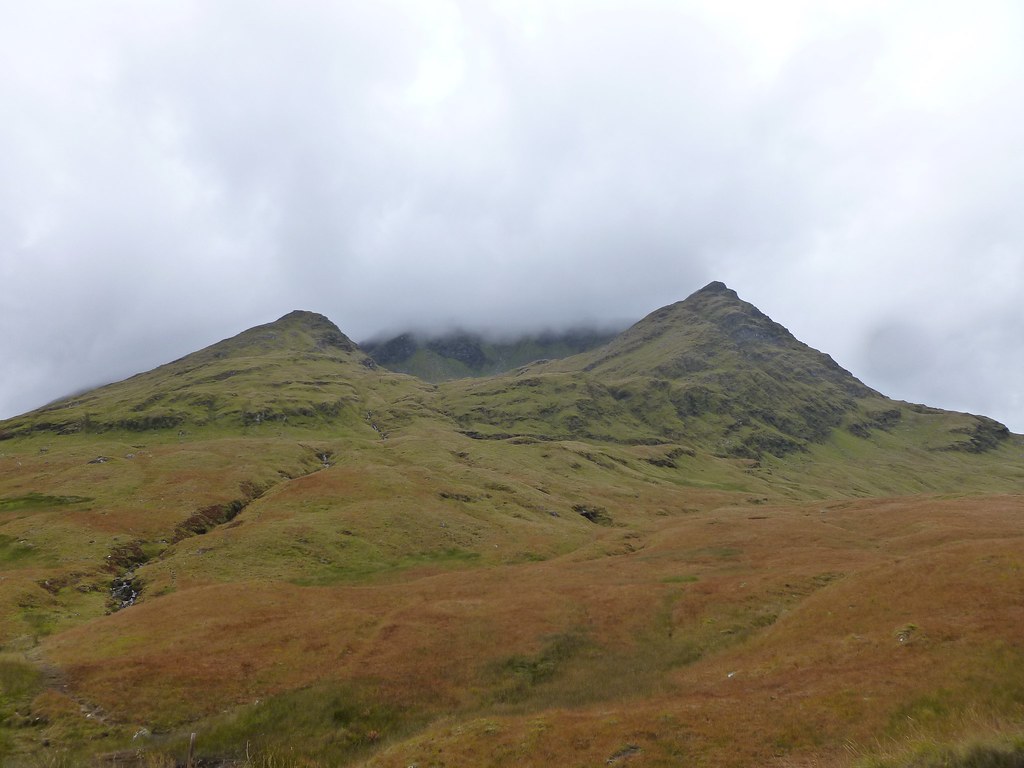 This was confirmed as the cloud was following me down and I was starting to feel drops of rain blowing into me. I sped up and eventually reached the track ready for the long walk back to the car.

Quick march along the track, but before long, not content with throwing me off the mountain, Lui’s rain was chasing me down the valley and I was forced to stop and don my rain jacket

I said hello to my some chicken friends (they ignored me) 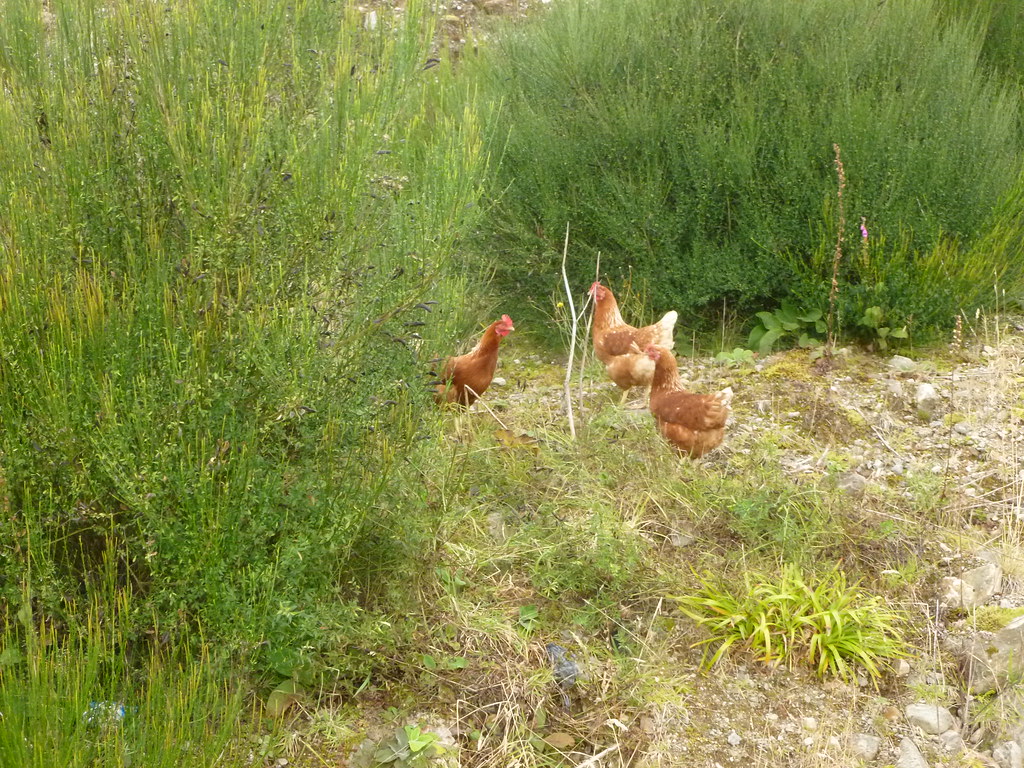 I eventually reached the car just before 3 and could see the weather still approaching.

It seems that I’ve picked a fight with a giant piece of rock with it’s own weather system. There’s only really going to be one winner here unfortunately

However, I am glad to have finally conquered these mountains! And tomorrow, back to work. After 4 trips and 10 munros in 8 days (just worked out at 89km and 6555m of ascent!!!), I feel like I need another day off to recover!

Great report and pics. Well done in conquering these hills. These are on my radar soon to bag as I have just done the Crianlarich 7. It's just a matter of good luck to get a cloud-free hill. Several times I have reached the summit in cloud and mist only for it to clear when you are on the descent walk-out.

GeorgiePorgie wrote:Great report and pics. Well done in conquering these hills. These are on my radar soon to bag as I have just done the Crianlarich 7. It's just a matter of good luck to get a cloud-free hill. Several times I have reached the summit in cloud and mist only for it to clear when you are on the descent walk-out.

Yeah I know it's just luck, seemed a little unfair that of the 4 times I was on the summit this week that not once did I get a view. I'm going to go ahead and take it personally

happyfut wrote:Just in ours thinking of you up their little bit jealous coz not on a mountain but me whiskey is fine and I no I'll be up their next week climbing more hiiiii hoooow