After yesterday's epic Crianlarich 'first pair' bagging of Ben More And Stob Binnein, I must confess to feeling a bit tired and sore afterwards. However, after a good warm shower at the B & B and a hearty meal washed down with a few cold beers in the nearby pub I began to feel the aches and pains of the day begin to fade away.

After a great night's sleep, day two now brought the next pair of Munros to be bagged; Cruach Ardrain and Beinn Tulaichean. Driving the short few kilometres outside Crianlarich on the A82, I parked in the well-documented lay-by and start location in Glen Falloch. At this early hour, the final remnants of overnight mist were beginning to burn off in the hot sun; today was going to be a cracker. So far, the weather for my week here in Crianlarich was proving to be brilliant. Mist burning off at the start of walk

Before departing from the Middle East for Scotland, I made the decision not to pack my mandatory sunglasses and selection of head coverings, a decision I regretted terribly as I will mention later in this report. I thought, 'Won't need them in Crianlarich!'

Once ready, I set off with one other walker who had driven all the way from Stonehaven to bag these two Munros. After crossing the style, a good gravel path is followed taking you through an unsightly construction development, a hydro scheme I believe which stretches all the way up the glen of the River Falloch. Once complete, I do hope the area is restored to its former self to typical highland landscape. 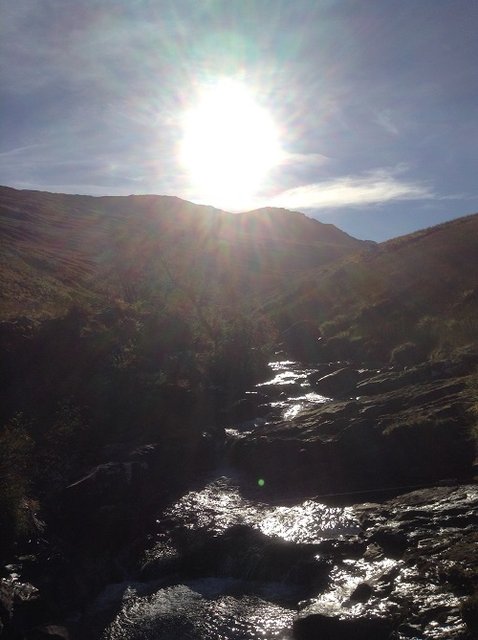 Once under the railway, the construction company have erected a single file baillie bridge which takes you across the River Falloch and onto a good track taking you into the glen itself. The track ends about 2.5km later at an under-construction dam scheme.

After the first kilometre, all my aches and pains from yesterday were soon a distant memory as I now got into a fine steady pace with my colleague. Reaching in-line with the forest edge, we now headed down to the river to cross by a wooden bridge. Ahead of us lay the long (but easier slope to yesterday) ascent to the first point on the ridge, Grey Height. It was here that my colleague left me as he obviously was in much fitter shape than I. I would meet him repeatedly on today's walk. The ascent by the forest edge

The initial ascent, although boggy with never-ending long grass, is a pleasure if regular stops are made to admire the ever-increasing views up Glen Falloch and across to the Tyndrum hills. My colleague found this terrain easy and I could just make him out as he strided confidently for the first minor summit. Not following the same line of approach as my colleague, I decided to continue following the forest edge and fence line passed the first style then onto meeting a second style. It was here that I met a good path, obviously working its way up from Crianlarich and through the dense forest to the open ground below Grey Height. Following this path, I reached the minor summit of Grey Height at 686m in good time. Ahead of me now lay the massive steep shoulder of Cruach Ardrain. From this point, a well-used path can be seen snaking its way up the ridge then shooting along Ardrain's western face before curving around to a path junction; left for Ardrain and right to Beinn Tulaichean. The walking along this ridge path is a pleasure and is not too taxing. Several small lochans are passed to enhance the enjoyment. Small lochan on way to Ardrain

Eventually you do have to start ascending again particularly as the path passes the western face. here the ground is very steep but the path is obvious. After this slog you eventually reach the path junction on the ridge described earlier and taking the left path, it is a relatively easy final ascent to the first of two cairns (the easterly one is the true summit at 1046m). How many walkers have just reached the first summit? The views from the summit were outstanding and I took the opportunity to have a wee cup of tea and a bite to eat revelling in the awesome views with the sun beating down. Beinn Tulaichean from summit of CA Wishing to stay longer in these conditions, I had to force myself to move on to my next goal - Beinn Tulaichean which I could clearly see to the south. Following the good path down Ardrain's south ridge posed no problems for an old man like me although there were a few tricky bits which I negotiated easily enough (thank goodness for my walking poles). Beinn Tulaichean from near the bealach

At the bealach, I was to meet my colleague from earlier who had summited Tulaichean and was now on his way back. A steady climb up the easy path took me to the summit in good time. Yet again, the panoramic views were fantastic and I dwelled longer than I should have to soak it all up. A day like today made up for the many miserable and wet days spent out walking the hills. Cruach Ardrain from the summit of BT Loch Voil from summit of BT

After another long rest period, I had to kick myself to now return to the bealach then a partial re-ascent up Ardrain before striking down the west side and into the glen below which was Coire Earb. This proved relatively easy as I eventually hit a lovely burn which I gladly followed down to the bottom of the glen. Following burn down into Coire Earb

I had also run out of water by this stage and was glad to refill my bottles from the cooling water of the burn. On the way down I came across a large granite boulder with a large clump of heather growing on top - very strange. Eventually I reached the bottom of the glen and decided to walk out on the eastern side of the River Falloch. This was hard going through bog and long grass and I succumbed to my first fall of the day into a deep bog. It was at this point (although I didn't realise at the time) that my normal glasses must have fallen from the top of my head and into the gooey black mess. Pulling myself out, I carried on hoping that the good track would be met soon at the dam construction. At this point too, I did not realise there was a better path on the western side of the river which would have been easier to follow. It would be the following day on the walk-out from An Caisteal and Beinn a Chroin that I would find this better way.

After what seemed like an eternity, I finally heard the engine of a JCB digger and within a few minutes, I made my way across the river by the constructed dam and finally onto the good track taking me down to my awaiting car.

It was at this point that I could barely open my eyes. All day exposure to the glaring sun without sunglasses and hat had now taken its toll. if this had occured further up on the hill, I don't think I would have got off. I was cursing myself for not bringing my sunglasses and head gear with me from the Middle East. Over there I wear sun protection all the time but who would have thought that I would suffer from sun blindness in Scotland? A hard lesson learnt. Opening one eye slightly at a time, I could just make out the silver thread of the track snaking its way to the busy road still some distance away. I was also very tired by this stage and began to stagger like a drunk. A passing shepherd and his collie on his quad bike stopped to offer me a lift which was sorely tempting but I bravely fought on. For what seemed like an eternity, I finally reached the eyesore development of the lower hydro scheme then onward to the lay-by where I was so relieved to see the waiting car.

Another great day on the hills in superb weather which is due to last for my time here in Crianlarich. Four down, three to go with An Caisteal and Beinn a Chroin planned for tomorrow. First priority tomorrow will be to purchase sunglasses and a suitable hat!

Great pictures and a great walk!

I did these two almost exactly a year ago in similar weather. It was such a treat having done most of the other Crianlarich hills in horrible weather with zero visibility. Your photos are much better than mine though, I think I was too busy enjoying the views

I did these two almost exactly a year ago in similar weather. It was such a treat having done most of the other Crianlarich hills in horrible weather with zero visibility. Your photos are much better than mine though, I think I was too busy enjoying the views

Thanks for good comments. I'm no photo expert - I just snap away and hope some pics come out. Had such a great week in Crianlarich for weather. Still thinking about all my walks I did and will plan the next ones when I'm home next. Enjoy.