My last chance for a proper walk in October, but not the greatest weather forecast

... For once, the best of a bad lot based on the www.mwis.org.uk forecast sounded like the Loch Lomond and Trossachs National Park (this NEVER happens

!), so I settled on a Hallowe'en outing to the Corbett Meall an Fudhair and the Graham Beinn Damhain, a round I'd had my eye on for a wee while.
Most route summaries for this pair that I've seen mention that the parking near the start of the route is a tad dodgy... Now, I had very narrowly escaped getting my car stuck forever in a bog on a bit of vergeside parking in the back of beyond on my last outing

, so I am now a bit phobic of squelchy vergeside parking spots

. I therefore decided to start from the handy big car park at the Drovers' Inn at Inverarnan. This added a good twenty minutes' road walking at each end of the route, but I reckoned it was worth it to avoid another wheels-spinning-helplessly-in-mud experience.

our_route.gpx Open full screen  NB: Walkhighlands is not responsible for the accuracy of gpx files in users posts
It had been raining heavily overnight and was still wet when I set off, but this at least made for a very fine view of Beinglas Falls from the car park: 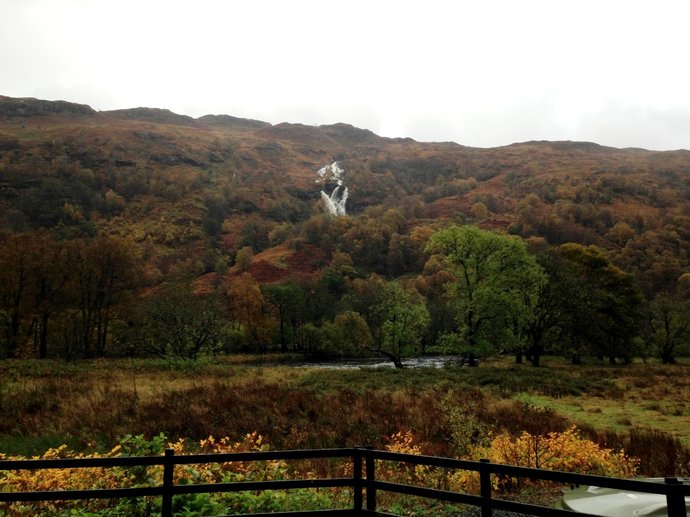 After a bit of fun dodging the juggernauts on the A82 north of Beinglas camp site, I arrived at the start of the route proper, over a locked gate at the start of a track immediately opposite Glenfalloch Farm. The track, liberally decorated with cowpats, initially rises quite steeply to cross a bridge over the West Highland Railway Line. Slightly portly as I admittedly am, I thought I'd probably just about make it under the weight limit A bit further up the track, I encountered the Cowpat Generators: 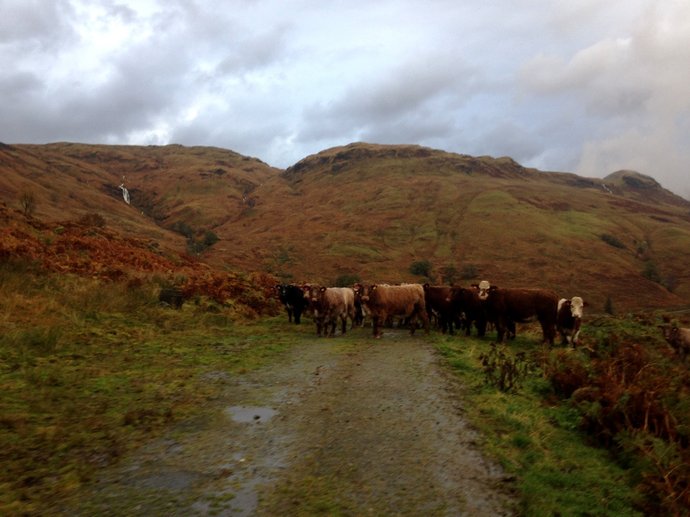 Definitely not a great day's weather, but at least there were some lovely autumn colours to admire down in Glen Falloch 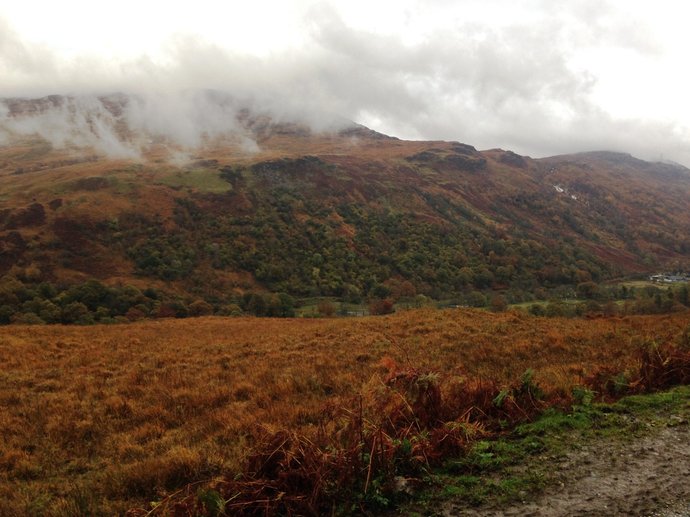 The track ascends under some pylons (taking a big loop to the right which can be bypassed beside a stream) to a T junction, where I turned left for Beinn Damhain. A bit higher up, there was a nice wee view over the north end of Loch Lomond: 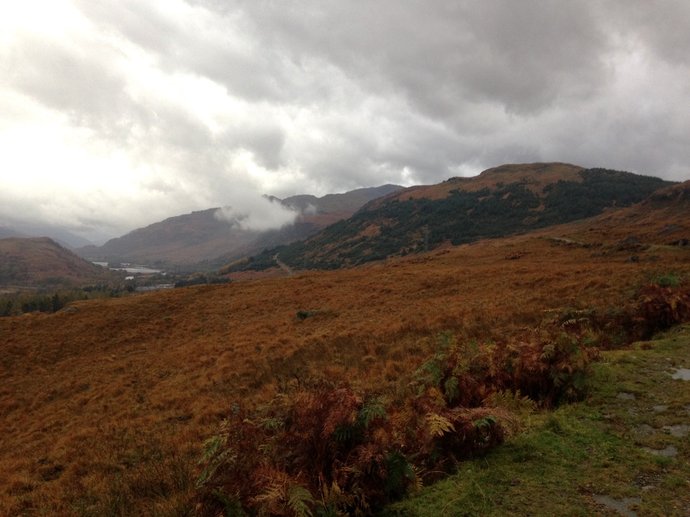 There were some interesting big boulders to the right of the track on the next section, presumably glacial erratics. I particularly liked this chappy, which looks vaguely humanoid if you squint a bit, with a 'nose' and a grassy bunnet. It being Hallowe'en and all

, I'm calling him the Damhain Demon: The track eventually ended at a dam on the Allt na Lairige Arnan, where I cut up left (SW) on the east bank of the burn that comes down from Lochan Beinn Damhain. The burn was in full spate today, and looked potentially tricky to cross: to my relief, however, I found a safe crossing point a bit higher up where it divides into three branches around some boulders. 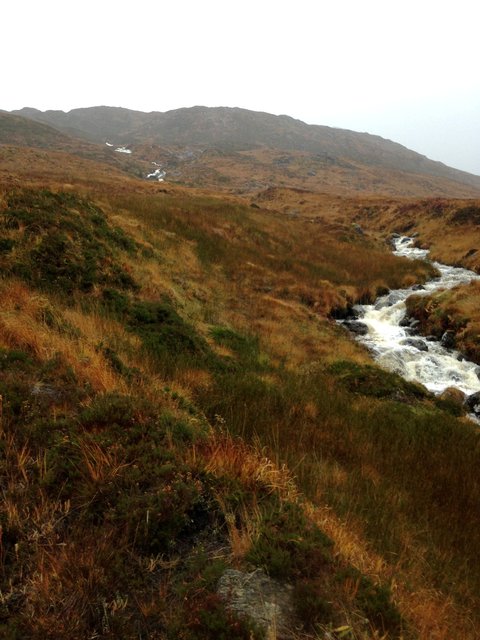 This led to Lochan Beinn Damhain itself, a pleasingly remote spot that feels miles away from the busy A82 (although in fact the map shows that it's only 2 kilometres as the crow flies). Beinn Damhain's summit was in plain view now just to the west. A surprisingly craggy wee brute it looked from down here! 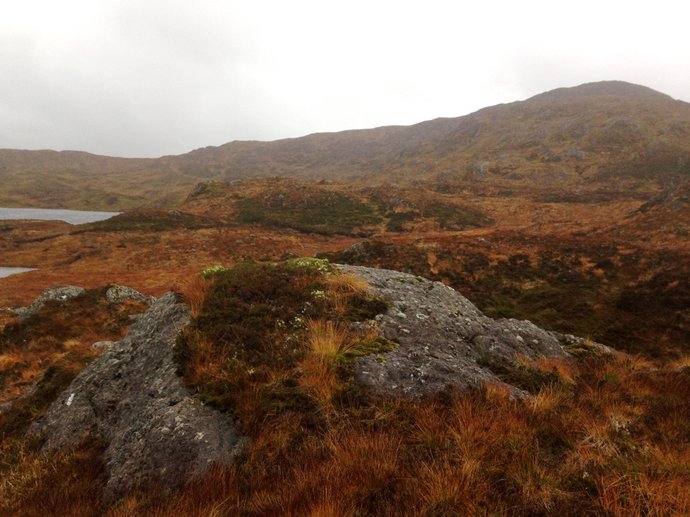 Now, I must say that I take issue with the Walkhighlands website's description of this Graham as 'an indistinct summit on the moors north of Ben Vorlich'. Looking at the map, it might be indistinct if approached from the south or east, but when approached from the north or west (as almost everyone surely does), it is rocky and well-defined: actually a rather fine wee hill. Shurely shome mishtake...

?
I took a directissima route up from the lochan, which proved to be a bit scrambly in parts (there are almost certainly easier ways up if you look for them). The surprisingly big cairn came as a bit of a relief. To my surprise given the dodgy forecast, the summit was still Clag-free, and proved to have good views: 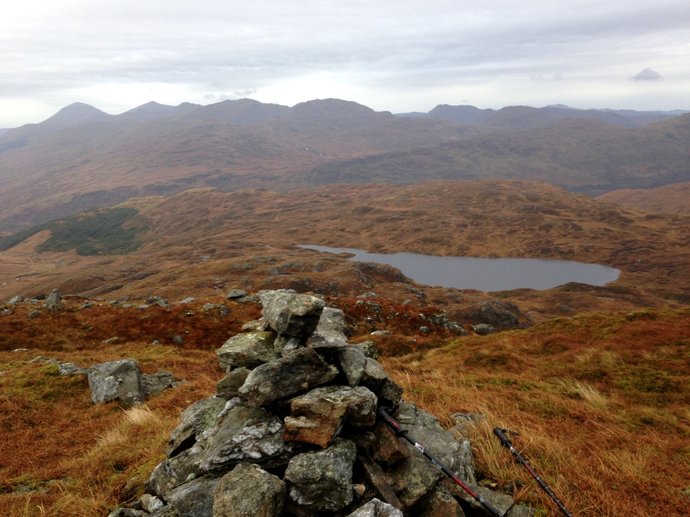 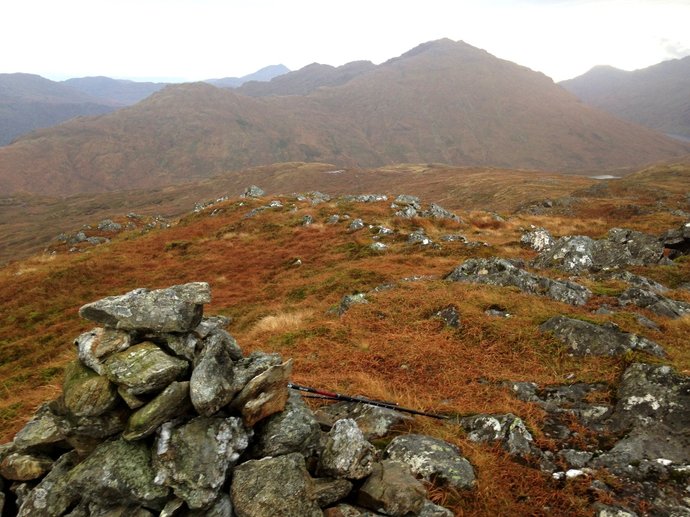 I set off directly northwards towards Meall an Fudhair across the Lairig Arnan. Shortly after leaving the summit, a large lochan comes into view in the Lairig Arnan that makes a useful navigational target: it's best to aim just left (west) of it to find the easiest and most direct ascent route for the Corbett. 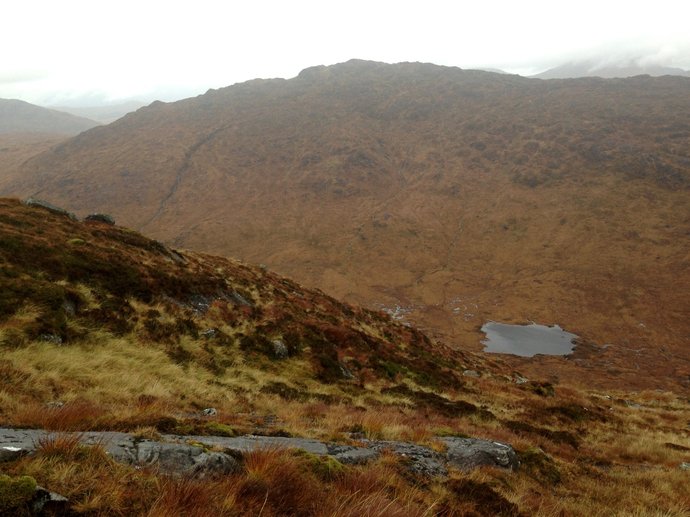 It was a steep and bouldery descent from Damhain though, and it took me longer than I'd expected. The Lairig Arnan is your basic U-shaped glacial trench, and I was worried that the flat bit at the bottom might be an absolute quagmire (particularly after yesterday's heavy rain, but thankfully it wasn't as bad as it had looked from above. Unfortunately, however, Meall an Fudhair had just decided to plunge its head into the Clag 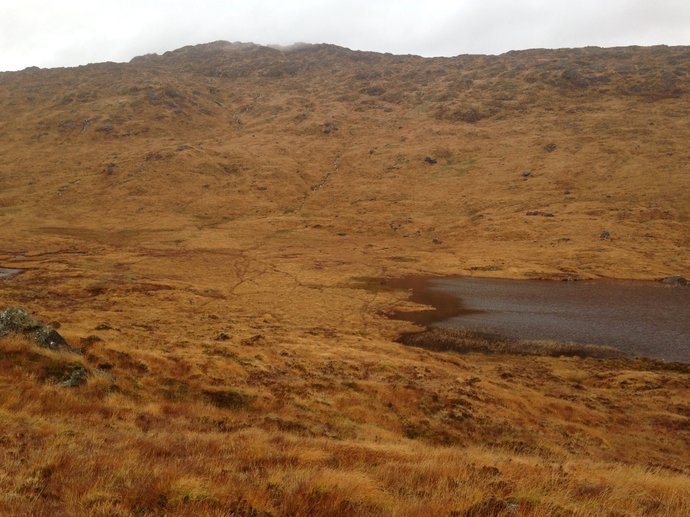 I was a bit peched after the Graham, which had proven itself a much more worthy adversary than I'd anticipated, so I took my time on the way up Fudhair (which actually wasn't nearly as steep as the other side of the Lairig) and stopped for lunch about two-thirds of the way up. There was a last good view across to Damhain before I hit the Clag-line: definitely a rather impressive wee hill. 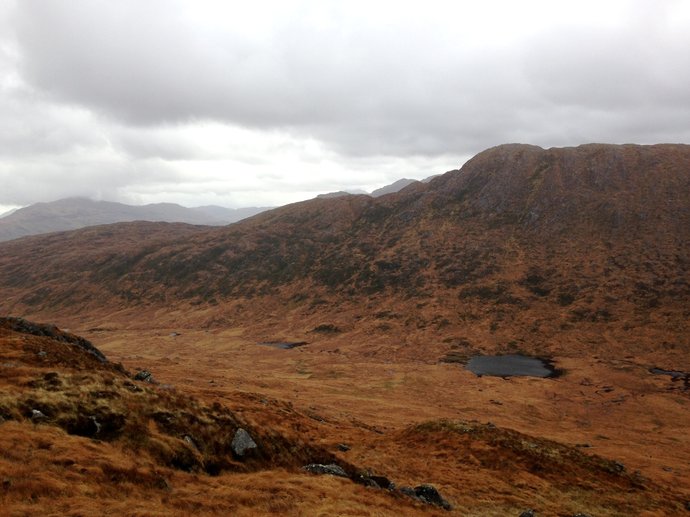 The next section was a bit frustrating, with a succession of false summits looming out of the Clag, and it was a relief to eventually reach Meall an Fudhair's cairn. This turned out to be a somewhat halfhearted attempt at one of those windshelter thingies, as though someone had got fed up halfway through the job. Nae views either. Still, it's a Corbett and another Blue Balloon, I suppose... 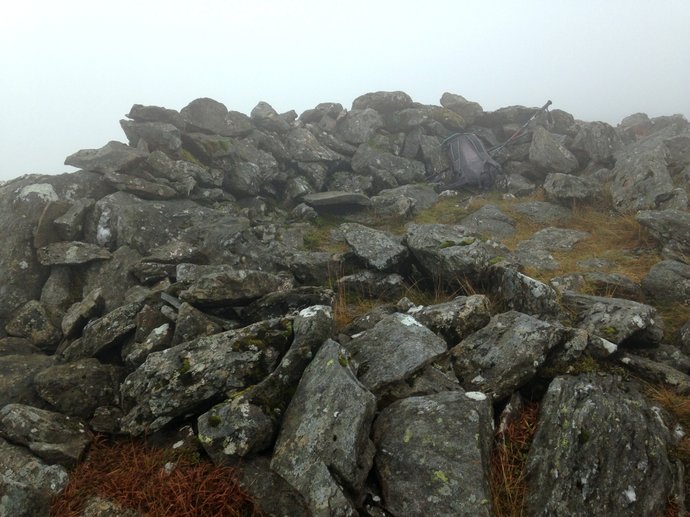 Things picked up markedly on the next section, heading eastwards through the Clag to the subsidiary tops of Meall nan Caora and Troisgeach. This proved to be a very unusual landscape of lumpy ridgeline strewn with big boulders and what seemed to be hundreds of tiny lochans. It was eerily beautiful, particularly in the Clag, and particularly on Hallowe'en 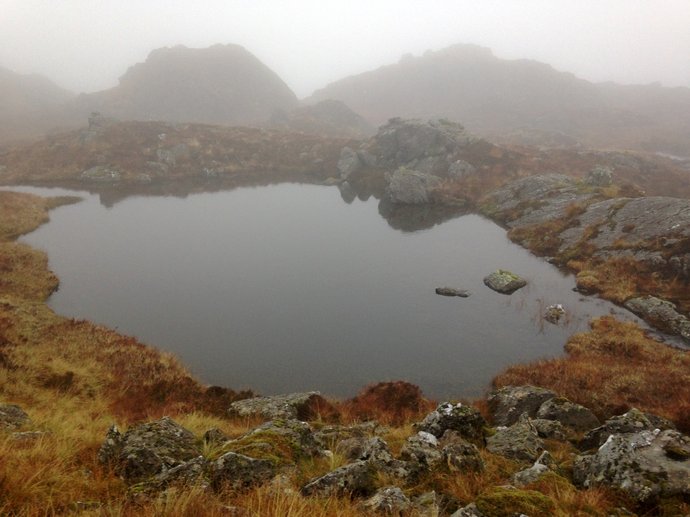 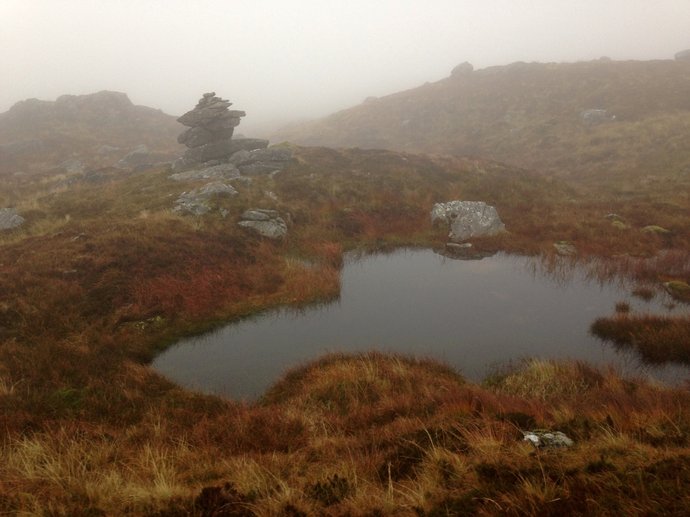 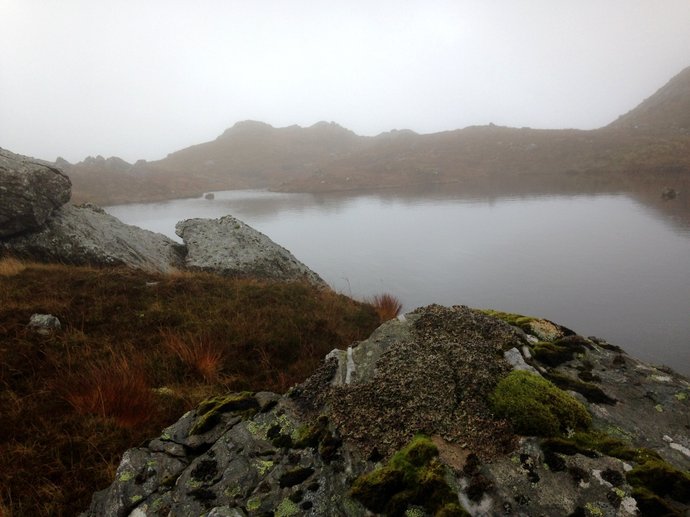 At first I was enjoying this tremendously, taking my time with lots of photo stops. As the Clag inexorably thickened, however, I did actually start to get a bit creeped out. Also, it had started to occur to me that if I didn't pick up the pace a bit, the thing most likely to be going Bump in the Night round here was me when I ran out of daylight

...
Eventually however, Meall nan Caora loomed out of the Clag ahead, with an interesting wee dumpling-shaped subsidiary peak just to its west. Caora has a rather cute cairn, precariously perched on a big boulder: 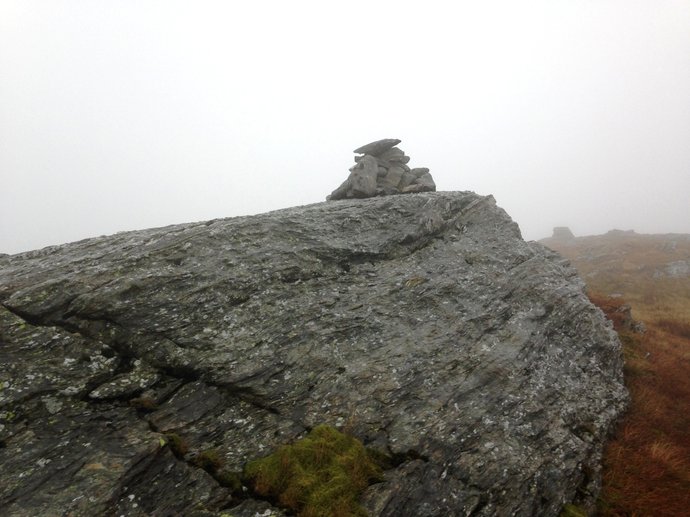 Another trek eastwards through the Clag, and I arrived at Troisgeach's cairn, with its famous view of Loch Lomond: .
I headed off down Troisgeach's pleasingly lumpy east ridge, hoping eventually to pick up the track again at the pylon line. The path had disappeared (or maybe I just lost it), and finding a safe way down in the Clag, avoiding various wee craggy sections, gave me a bit of 'fun'.
Eventually, to a fanfare of angel trumpets, the Clag parted to reveal a brief glimpse of Paradise! (On closer inspection it was probably just Glen Falloch, but still impressive nonetheless 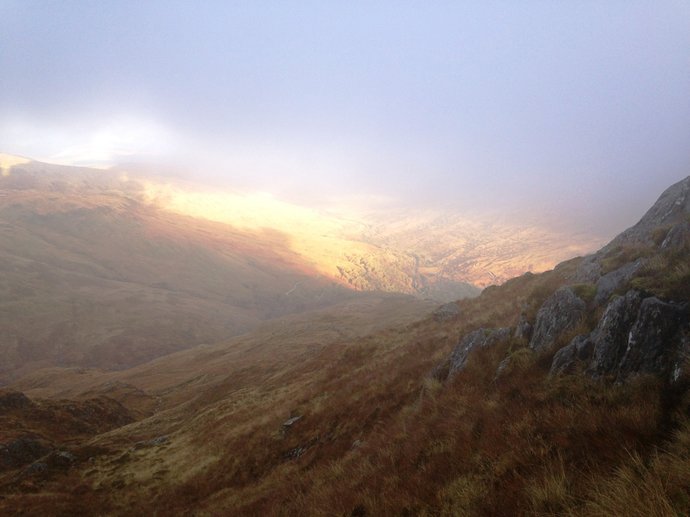 Someone over there was definitely enjoying better weather than I was getting... 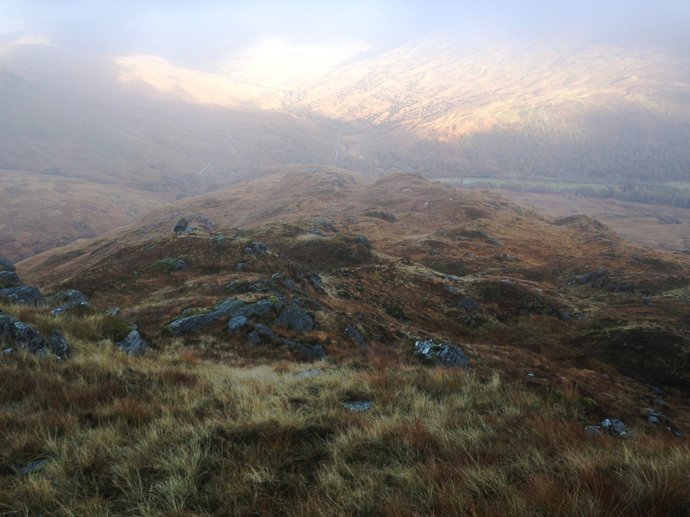 A bit lower down the ridge, there was a good view over the Bonny Banks north: 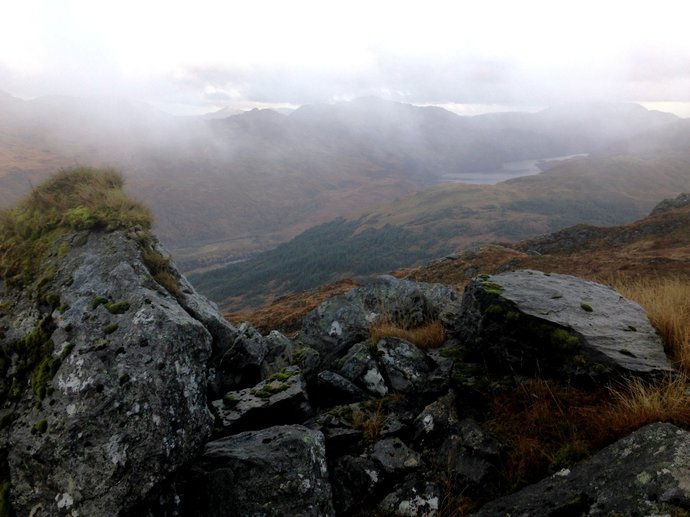 Fairly soon after this, I sighted the pylon line and then the track below it. On the way back down the track, there was a last hazy view of Loch Lomond: 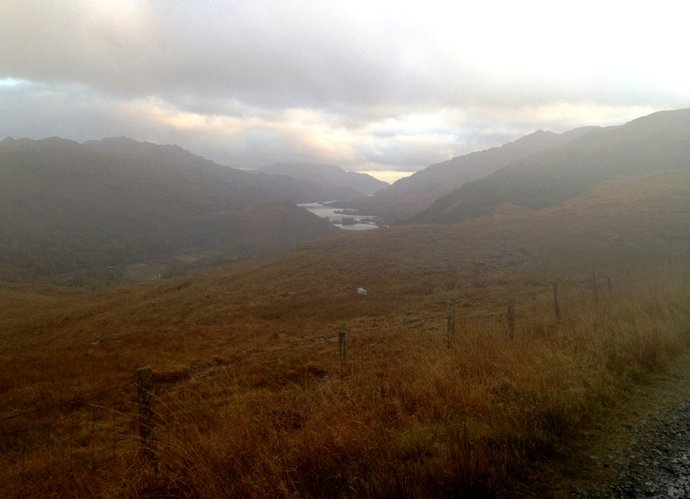 (Some of this haziness accurately reflects the climatic conditions, but some of it was also because both me and my camera lens were decidedly damp by this point

).
Another quick bit of juggernaut-dodging down the A82, and I was back at the car. A fine Hallowe'en outing despite the weather

. Both hills more interesting than I'd have given them credit for: Beinn Damhain is a fine wee rocky hill, and although Meall an Fudhair is a more rounded lump, that strange lochan-and-boulder scenery definitely makes up for any geomorphological shortcomings.

Ooh, I like the pictures of the lochans. Very atmospheric for Hallowe’en!

thanks for that- will be heading up fhudair again in the next couple of weeks and will add the graham this time round...
i remember parking across the road from the squelchy spot last time i was up - although it was snow and ice, so might have been just as squelchy underneath i suppose