Ben Chonzie in the Autumn Sun

Ben Chonzie in the Autumn Sun

It's Monday morning and I get asked "how was the hill?" - I think I have no become known as "hill boy" at work.

Admittedly my answer was typically Scottish, beginning in 'S' and ending in 'e' with the word 'hit' in the middle (Only from my recent ventures away from Scotland have I realised this is not an internationally known adjective from anything sub-par...)

I read 10's, sometimes nearly all of walk reports of each hill before I begin my walk for 3 simple reasons; 1, I like a rough idea of where I am going; 2, it is a great way to get hints & tips; 3, once I read one I just cannot stop.

As a result of number 3 above... I was well briefed. With clever titles such as "Ben ChonZzzzzie" I was not expecting a thriller, so why bother?

Guaranteed sun combined with it being the first day in November the opportunity to top up on the vitamin D levels before the slippery slope into winter was one not to be missed! After following the rather bendy road we (Dad and I) ended up at the Invergeldie car park around 10:50am.

After a short 10 minutes of gradual uphill the view began to open up. I am not a fan of winter so Autumn just means the beginning of walking to work in the dark and walking home in the dark. This view was probably one of the rather few moments I stopped to appreciate this season... Orange everywhere. Except that blue thing in the sky... Why were the clouds blue?! An open bar on Saturday afternoon and a meal with the parents on Saturday night in their attempt to avoid those out guising... (Trick-or-treating for any of my non-Scottish friends), meant before long, the easy walk turned into a gin & tonic, beer and wine detox.

10-20 minutes into the walk. Shorts and t-shirt, sweating buckets in November

Definitely not complaining (although I more than likely was at the time). 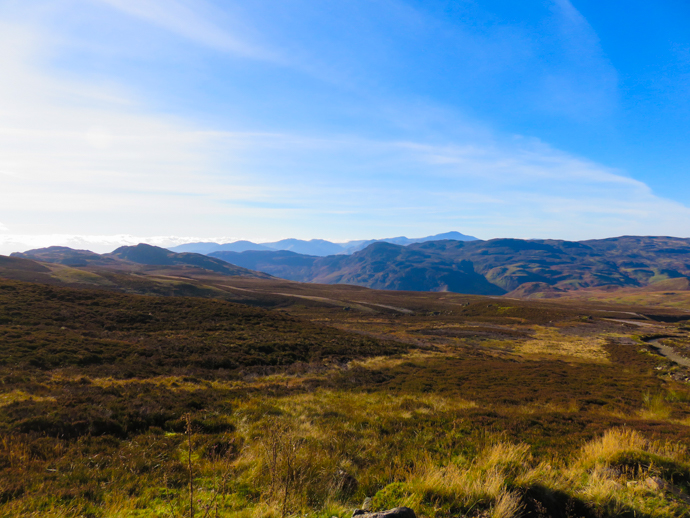 Before long we had made it up the vast majority and we left the well defined path. I know my reports often don't offer much advice so here is my 'golden nugget'...
Take the left at this wee cairn, deal with the 20m of bog and it is a straightforward jolly up to the top. After a minute or two you get even better views looking back on where you came from. Before long it flattens out and it is a very gradual walk, following the posts to the summit and shelter.
Here are a selection of the views. Once you reach the summit you get the first views of the Loch Turret Reservoir. I must admit I am still an avid fan of the weekend long adventures and with this being an 3.5 hour round trip it didn't quite fit the bill. On the plus side, not carrying everything (and the kitchen sink

). On another note - they have shrunk! I won't start with the 'back in my day' nonsense but I dread to think what the size of a 'fun sized' Mars bar is now! I doubt they are much fun at all! In fact I am sure it is probably quite a traumatic experience. One bite to wet the appetite and prepare the stomach for calorific-goodness, then BOOM, there is no second bite - shambles.

The route down is the exact same at the route up, only in reverse - funnily enough.

By now the sun had dipped, Autumn is growing on me. See what I did there... changing the colour to orange...

The walk was over, the 31st munro had been 'bagged' in just under 3.5 hours. We began the drive back to Aberdeen but we had one stop left (excluding the stop at some Toby Carvery place).

On the way up we noticed signs for "Devils Cauldron". Given it was halloween weekend, this seemed like a pretty fitting addition to the walk. Only 1/4 miles from the small lay-by we made our way there.
I have marked up very roughly where this is for anyone who is interested on the below route (obviously we took the car, the lay-be is pretty clear).

our_route.gpx Open full screen  NB: Walkhighlands is not responsible for the accuracy of gpx files in users posts
Deil's Cauldron - I still don't know the story behind the name, but personally I think Devils sounds more 'enticing'... One of my 'old man' pet hates.. I have no idea why anyone would (or can even be bothered) to take the time out their day to scratch their name like a 5-year olds writing into wood. Glad we took the short trip down to Deil's Cauldron because I got two of my favourite photos from the day. If you are reading this report before walking up Ben Chonzie I would highly recommend it. Only take 5 minutes. If Autumn depicts the slippery slope into winter, the above accurately reflects this. I did wonder why there was little 'bumps'... Dad quickly put these to the test, they passed. It was slippy!

I began these reports to keep track as each hill began to merge into one. This weekend might be better remembered for meeting big Peter Lawell or sharing the directors box with Rob Stewart to watch the sheeps' 'title challenge' disappear down the drain quicker than you could say '3-1' instead of Ben ChonZzzzie.

Nevertheless, I read reports where people disagree with the whole concept of walking these hills just to bag them all. Why, I am not sure. A lot of people believe it's better to walk the same exciting hill over and over again rather than do a few dull ones.

Personally I couldn't disagree more. I am slowly working my way through these 282 mountains as a way to say I have seen more of Scotland than the vast majority. I know when I am complete (assuming I stay injury free!) then I can walk my favourites over and over again.

So yes, the only reason I bothered with Ben Chonzie was to tick it off the list. Is that a bad thing? I don't think so, either way with winter fast approaching it ultimately beats sitting on the coach watching junk on the TV.

Re: Ben Chonzie in the Autumn Sun

I love the autumn colours in your pictures!
Every hill has its own merits. I very much enjoyed Ben Chonzie, did it from Glen Turret. OK, it’s not the In Pinn, but it definitely made it to the ‘very pleasant’ category (which for some people may mean ‘boring’). It would be a perfect hill to start any winter hill walking on.
Nice diversion to Deil’s Cauldron!

Re: Ben Chonzie in the Autumn Sun

Ah, dear Chonzie. Where it really kicked off for me!

Nice to see some pics of the Cauldron, not been up there or up to the monument for some time.