Laying in my tent I gazed up to the stars and forced myself to get tired. Not that easy on a Saturday evening at 6pm, but with my alarm set for 3:45am

I knew I would need sleep.
Miraculously I managed to drift into sleep just after 7pm and even though I woke quite a few times throughout the night, I felt rather awake when my alarm went off and I got dressed. Stepping outside my tent I looked around and saw nothing but darkness. A few stars and a half moon above me gave hardly any light and following the small beam of light my torch provided I closed my tent and walked towards the car. Driving along the single track road I took my time and when I reached the small lay-by I was the first car ...possible a first. 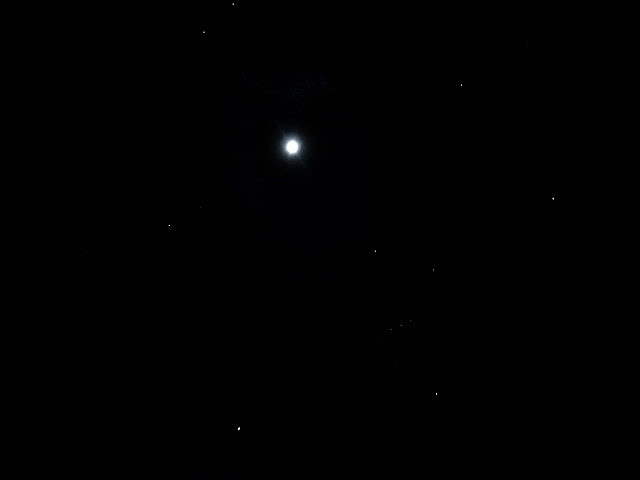 Changing into my gaiters and walking boots I grabbed my gear, locked the car and stepped into the darkness. Crossing the main road I stopped in the middle and marvelled at the lack of cars. Trying to get into a walking rhythm at 4:20 am on a Sunday morning was a struggle. By brain was certainly more than confused!

I have once read that walking in the dark will heighten your senses, but my senses must have just went straight into hill walking mode, as minus the fact that I could not see much everything else was just the same. It actually felt like walking in clag.- a rather dark clag 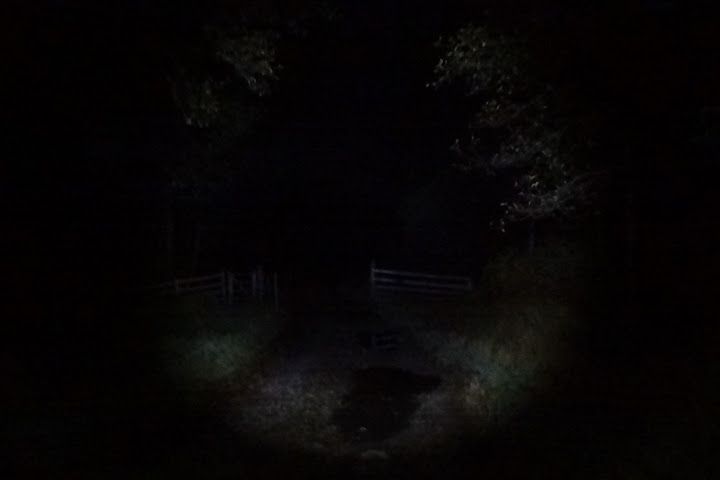 I lost track of time and space and crossing numerous small rivers and wet underground on the way I finally reached the bottom of Gulvain. Like a black mass the mountain rose above me and I made the mistake to follow the wrong path towards the left, as I simply did not see the cairn which indicated the other way. It took me a while to realize that I was heading the wrong way and apart from walking back, I decided to take a direct approach straight up. After all it was just a grassy slope.It was in fact a rather steep grassy slope and at 6:30 am I was in a T-shirt sweating buckets!

I also realized that the darkness started to annoy me and I was craving sun light.


It was very gradual when I became aware that the night around me was not as black anymore and towards the horizon black changed into a dark blue. Venus and Jupiter were shining brightly and made me stop and stare in wonder. 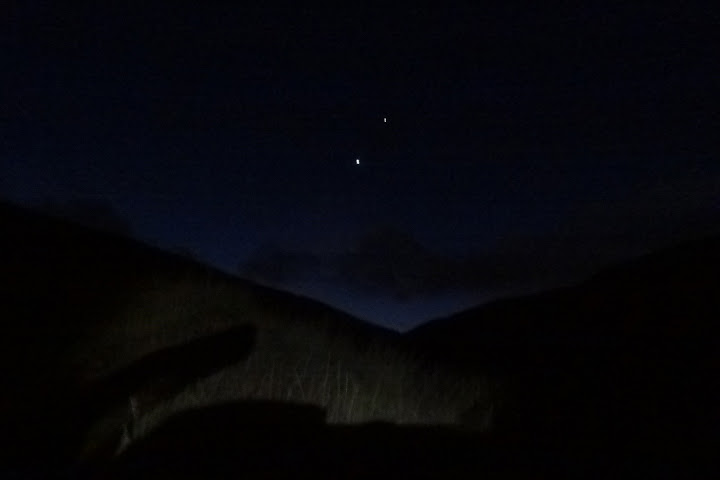 The night was changing slowly with Venus and Jupiter shining brightly 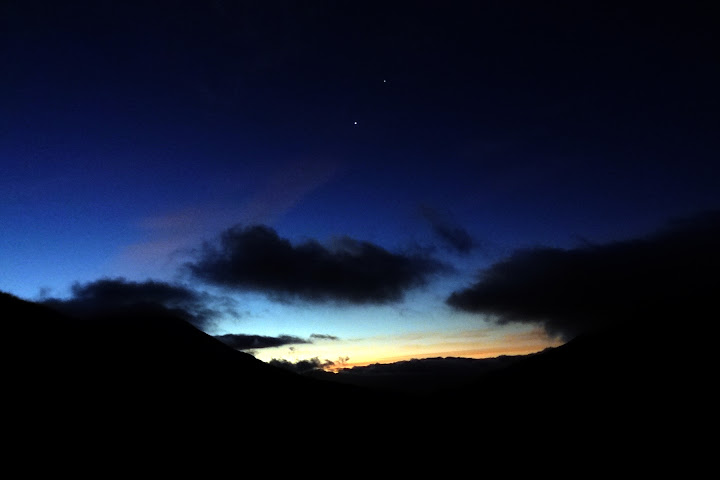 It was getting lighter


For the next half an hour I walked slowly and watched the surroundings around me slowly appearing out of the night. By 7am it was light enough that I was able to switch my head lamp off. A cloud covered the top of Gulvain and when I reached Leac Chaiginn ,I decided to sit down and wait for sunrise. A faint yellow and red glow slowly appeared on the horizon and a row of mountains became visible. Clouds began forming as I watched and gusts of wind raced across the mountain tops. The sky turned into a lighter shade of blue, mixed with pink and coloured the clouds into all shades of blue, grey, pink and cream. They seemed to fly towards me, covered the area around me and just as quick as they had appeared, were blown away again. It was mesmerizing and only enhanced when I spotted a group of deer on the horizon. 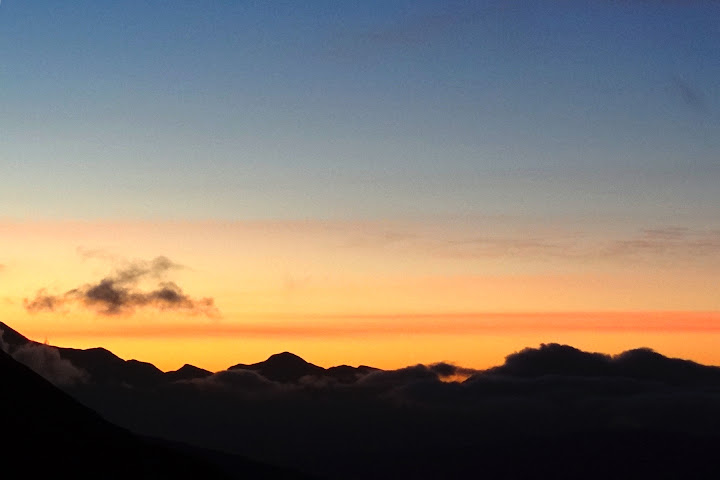 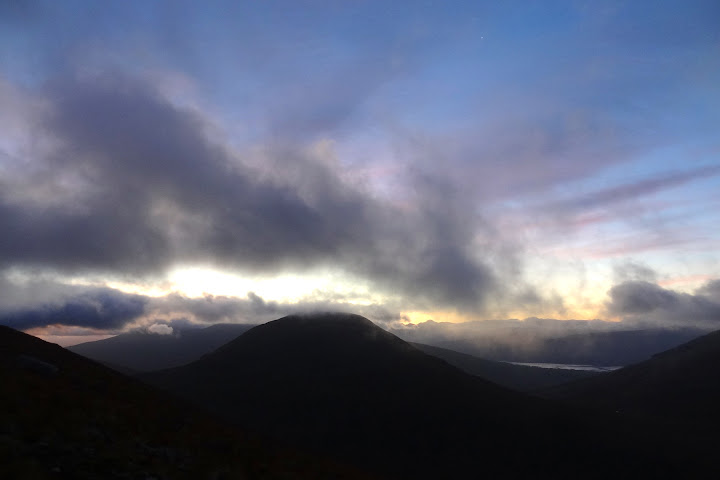 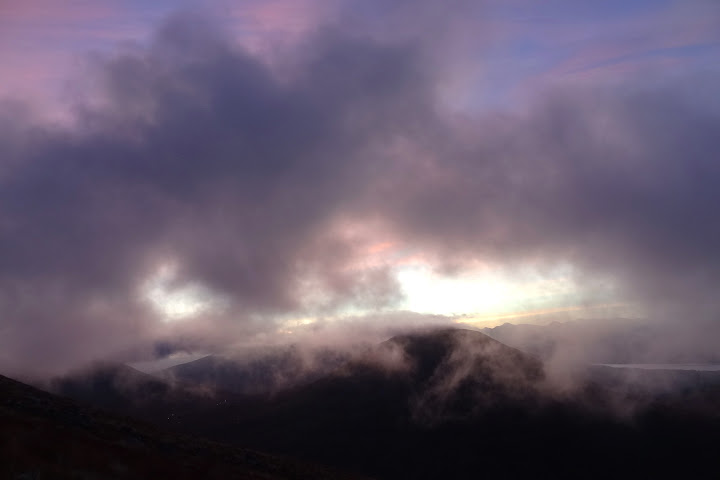 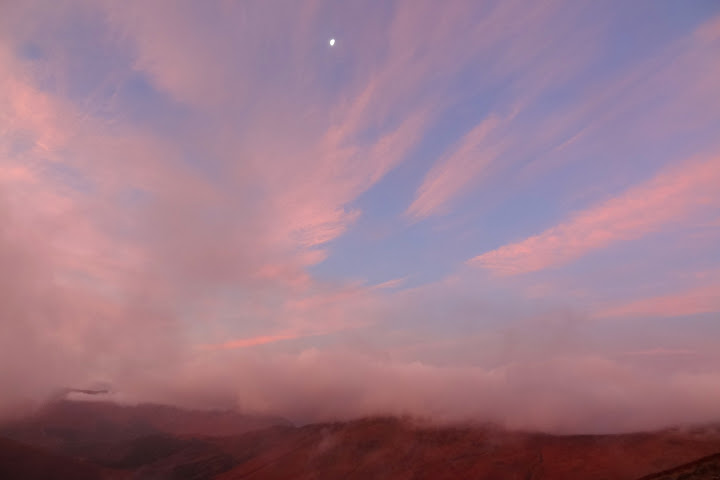 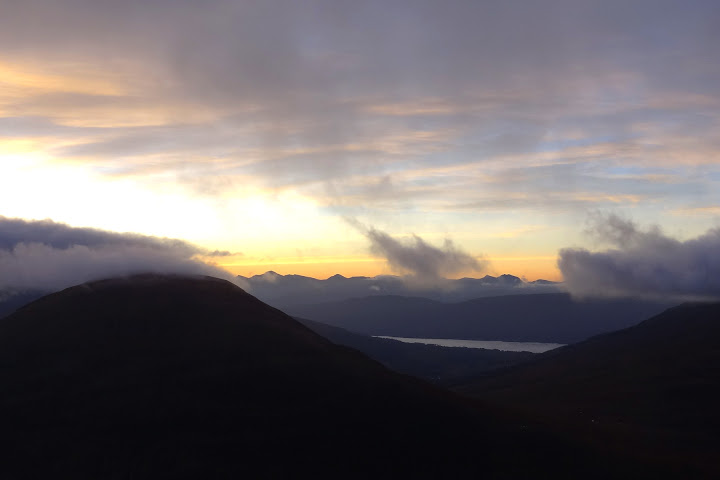 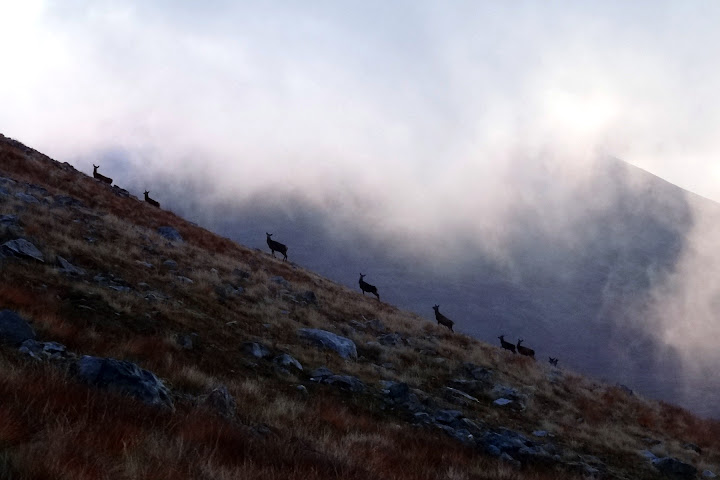 Shivering I looked at my watch, 25min had passed and I was too cold to hold on. Glancing up towards the summit, I made my way into the clouds. The sky changed again when a warm yellow glow painted the cloud…the sun! First a tiny dot of bright light which soon got bigger and bigger. Gulvain might be a beast to climb, but I hardly noticed the hard work. Dreamlike I moved on until the summit cairn appeared out of the clouds. 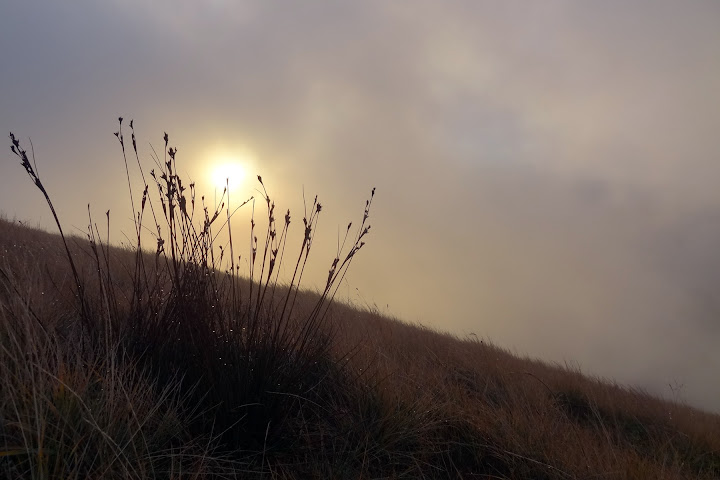 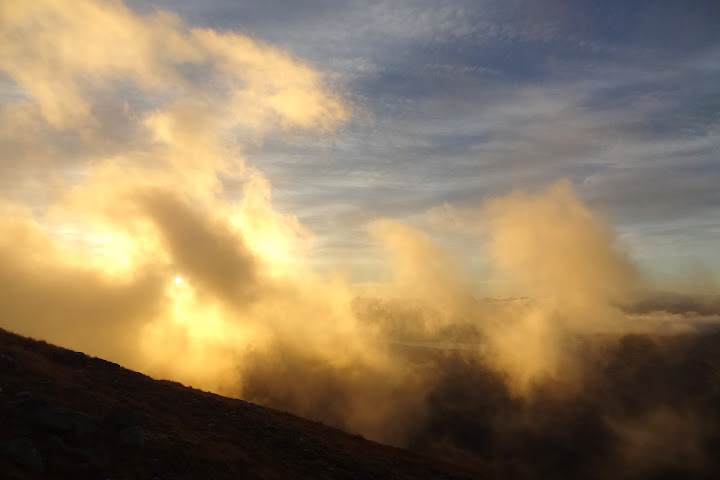 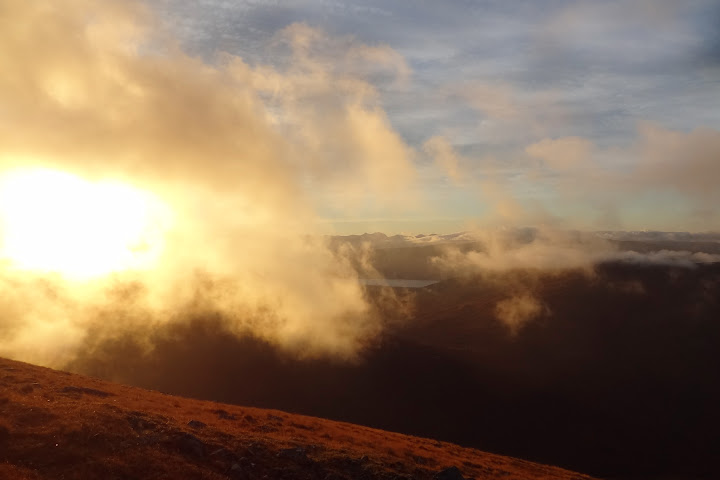 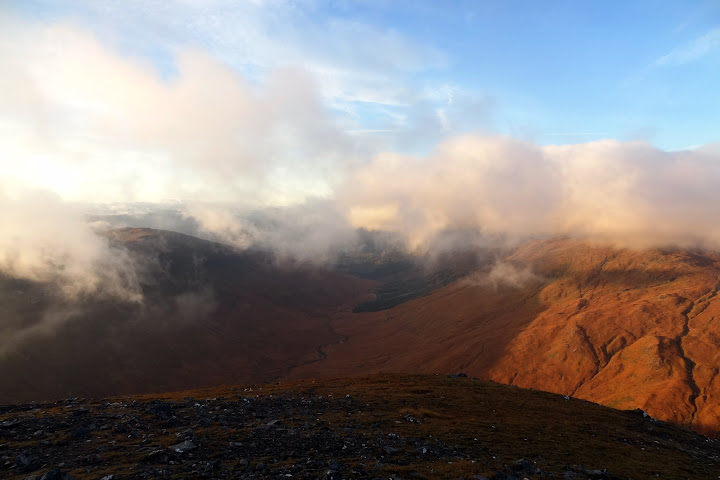 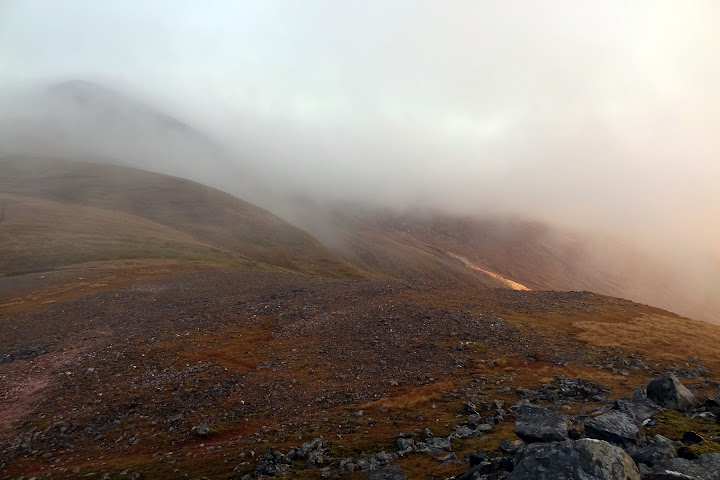 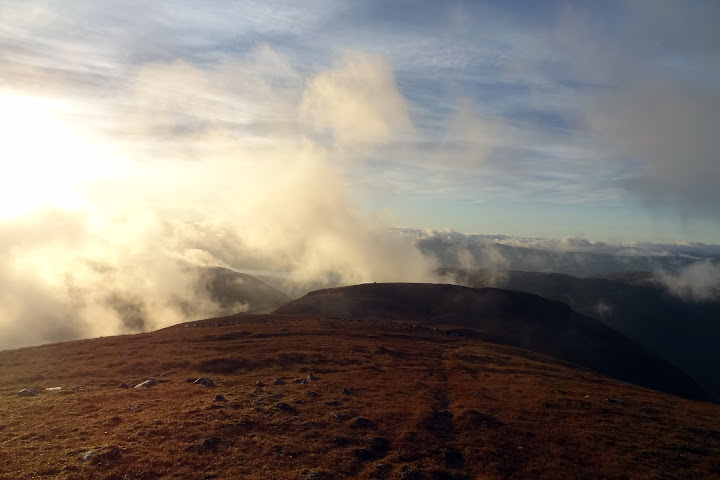 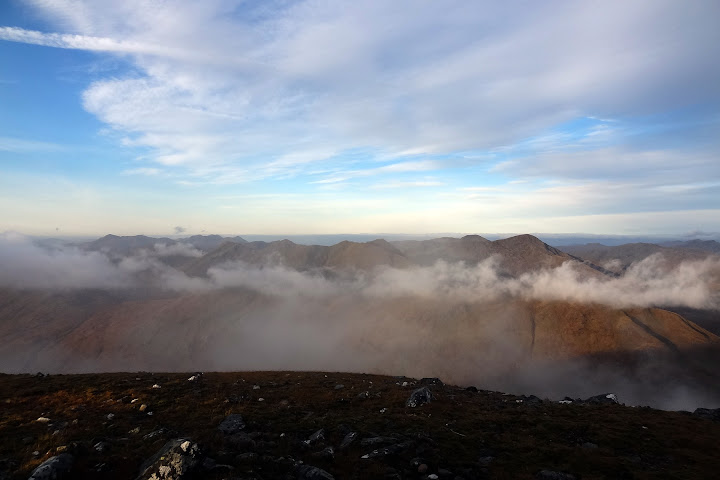 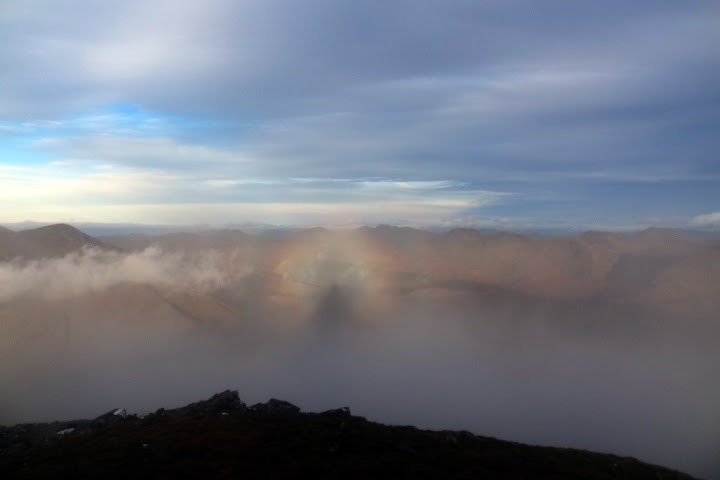 The wind was freezing and looking for shelter I sat down for a while. It was 8:15 am. Certainly the earliest had ever reached a summit and returning to the cairn my shadow cast a first broken spectre against the sky. It was too cold to stay much longer and returning the same way I walked up, I was finally able to see the country side around me.
The path seemed boggier than I remembered and never ending. I was glad when I reached the path again at the bottom of the mountain and walked along lovely Gleann Fionnlighe. 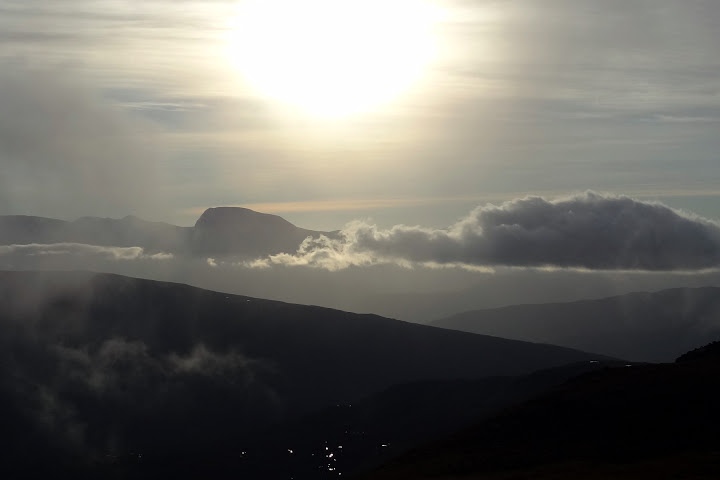 Ben Nevis seemed to be floating above the clouds 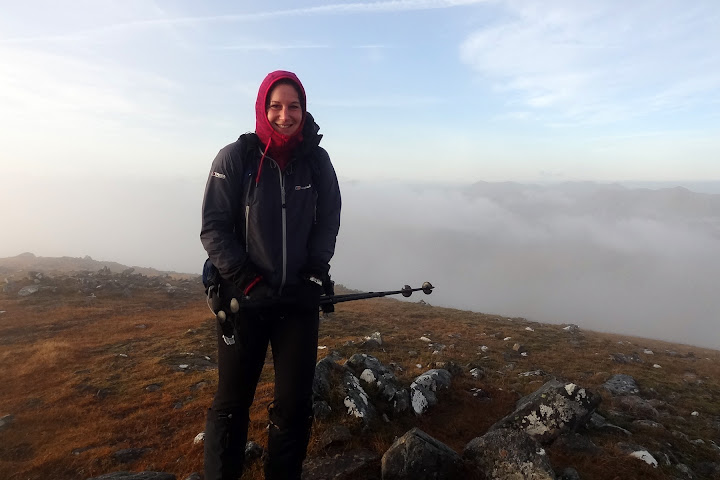 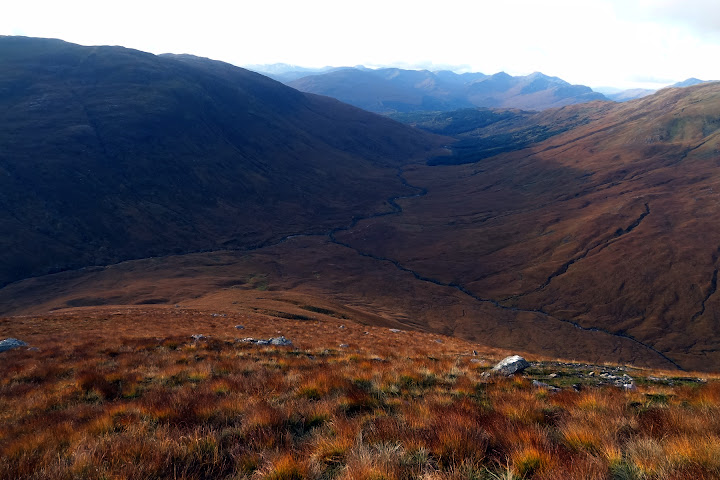 The valley was still cast in shadows 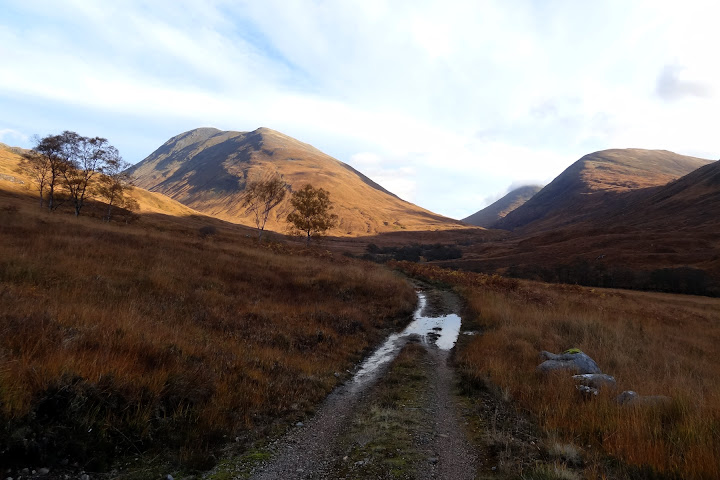 On my return looking back 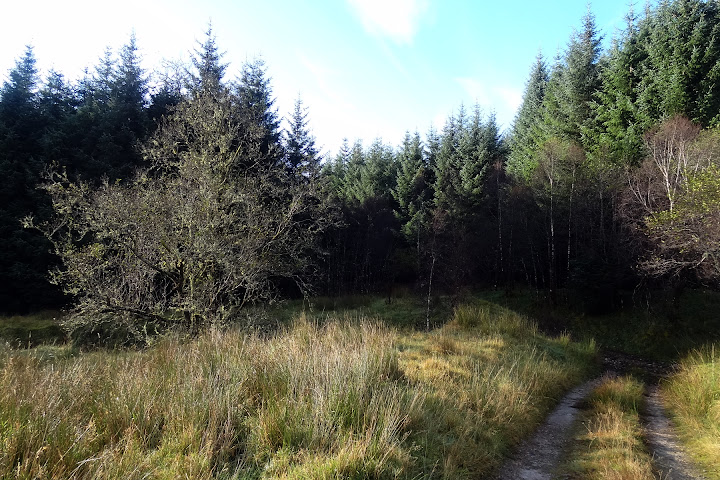 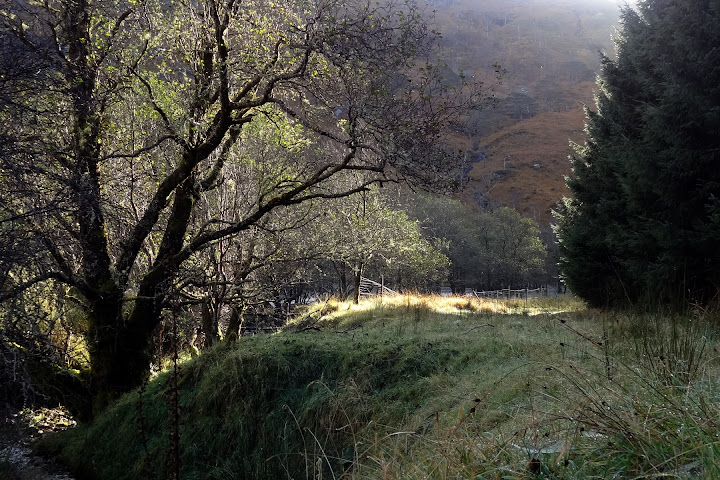 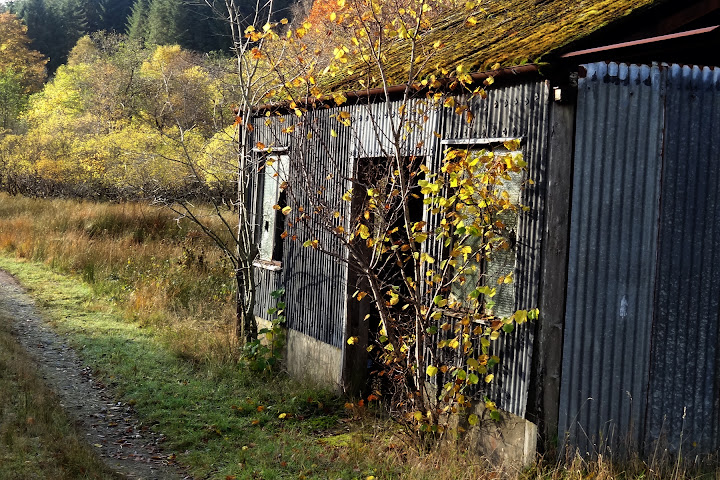 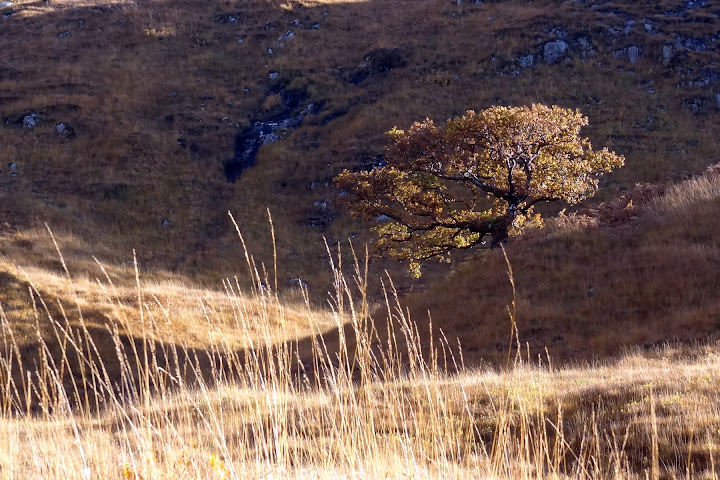 Gleann Fionnlighe
Back at my car it was not even noon…weird! But the advantage was certainly being able to drive back in day light and enjoy the remaining day. I will certainly need to do another night time walk soon.

Looks like we have another Alan Rowan in our midst!

Great stuff Maja - I have done this sort of thing a few times and after the initial reluctance to get out of my sleeping bag, have always loved the experience. There is something quite special about being at the summit of a mountain at such an ungodly time of day!

Splendid! This is something I've been wanting to try for a while but never had the get up and go

Wake up very early, walk in the darkness, at sunrise time on a summit, back about noon and still half of day remain.......Welcome in my World !

There is something very special to walking at night, have done it a few times too. I just wonder whether Gulvain seemed less steep, as you couldn’t see the steepness?

Lovely pictures of the dawn.

Just wonderful. And a Brocken spectre to cap it all! Magic.

I was up there in September and found the steep ascent tough going in the sun so something to be said for doing it in the dark. You also escaped the midge!

Dear All, many thanks for your comments

@ Graeme: Never thought that I would manage it, but the rewards certainly speak for themselfs! A perfect solution to short days and my dislike driving in the dark

I actually had to google Alan Rowan lol. Never heard about his book before.

@BobMcBob: You should give it a go!


@Petr: I don't know how you do it all the time! But I agree...it is great to have that much time left over at the end of each walk!

@Silverhill: I think it was not being able to see the 'monster' which helped...also the sunrise was a great distraction!!

Looks a great sunrise through the cloud. Wonder what the deer made of it.

Didn't you get cold??
Dont suppose that ever happens to hardcore munroists?