Down with the kids on Screel Hill

Down with the kids on Screel Hill


Sunshine seemed to be peeking through the clouds as we set off from the car park for Screel Hill - one of the rocky knolls guarding Dalbeattie.


screel-hill.gpx Open full screen  NB: Walkhighlands is not responsible for the accuracy of gpx files in users posts

A track led up the lower slopes of the hill, with views of the summit ahead. At a T-junction of tracks, a path leads straight ahead through shrubs and low trees - this is incorrectly marked as a track on OS 1:25000 maps. Rough and slippery after overnight rain, it led steadily uphill to cross another track and continue into a deforested area beyond (still wrongly marked on the map as a track). The felled area is a bit moonlike but allows better views over Rough Firth. England is somewhere beyond but it was a bit hazy. The following wooded section was the highlight of the walk today - an interesting path, steep in places but with lots to see. Leaves were glistening with raindrops and little birds hopped amongst the fungi on the forest floor. After quite a long time in the forest we finally burst clear at the top into welcome sunshine, the attractive and rocky summit ridge visible in front. The path steepened to gain the ridge proper, getting a bit wet on the way thanks to a stream running down the middle, but with more great views. Theoretically the ridge should have provided drier going, but in fact the path follows a little dip for most of the remaining distance to the summit, staying soggy. Nothing serious, but we ended up trampling the heather on either side quite a lot of the time. 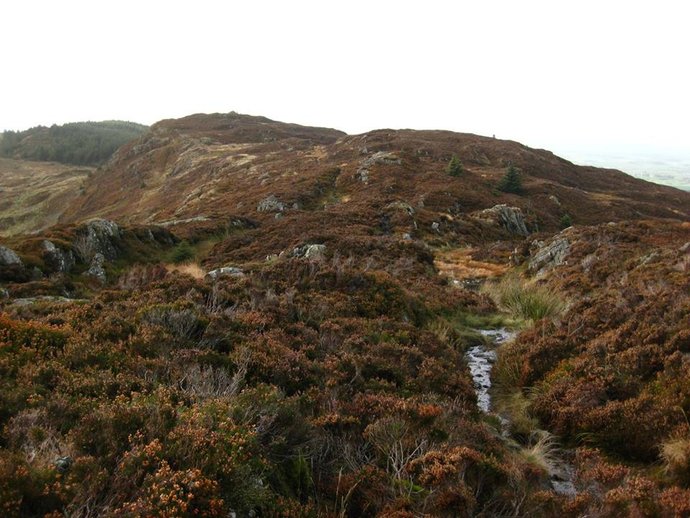 A large group of primary school children were at the summit ahead (what a great school trip!), but they were just leaving as we arrived so we soon got the panoramic views to ourselves. It was still a bit hazy but Castle Douglas was easy visible below to the northwest, plus the whole of Screel Hill's summit ridge. Heading down we soon caught up with the stragglers from the school group, and then reached a very steep section which the children were being instructed to make their way down one at a time. It was a bit slippery today (hands were used) - quite ambitious for a whole class of eight-year olds or so! Beyond, the gradient was much gentler, heading left between the ridge to the left and Screel Burn to the right. 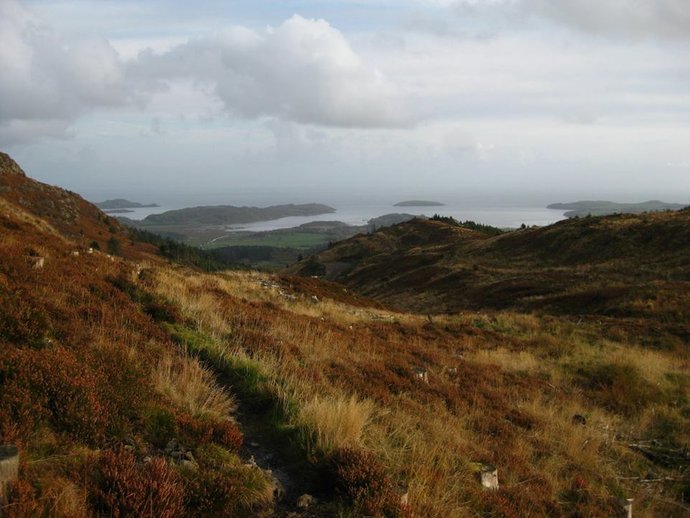 The path descended to a track, but not before a long section that had been surfaced with very slippery logs. From here it was easy going, until the outward route was rejoined at the track junction below the deforested section. 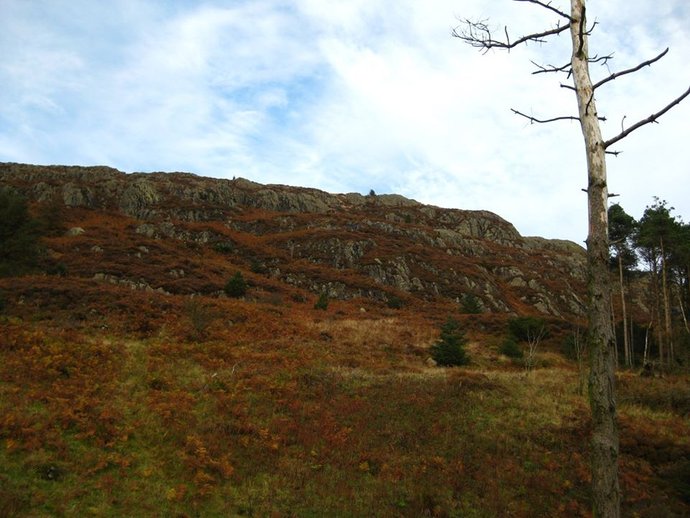 On the final track section before the car park, a path branched off over a ditch to the left, providing a more direct descent back to the car. A decent, rocky hill with plenty of character.