Munros included on this walk: An Socach (Braemar), Càrn Bhac

Carn Bhac, An Socach.gpx Open full screen  NB: Walkhighlands is not responsible for the accuracy of gpx files in users posts
Today I was on a bit of a tight schedule, having to drive a long way in the evening for tomorrow’s hills. So with bike hire facilities at hand in Braemar (www.braemarmountainsports.com 18 pounds for one day including lock and repair kit) it was a no-brainer.
I set off on an adult sized bike, but by the time I arrived at Inverey the bike had definitely shrunk. I readjusted the saddle and this time managed to secure the turn-lock mechanism properly, with a bit of gentle persuasion from my walking boot (which I had taken off first, of course).
What can I say. Glen Ey is lovely, especially at the start with the house and pine trees. The track is quite good and apart from 2-3 steep sections virtually flat or at least it seemed to be flat. The ride in went quickly and smoothly. Only downside was this biting cold wind. 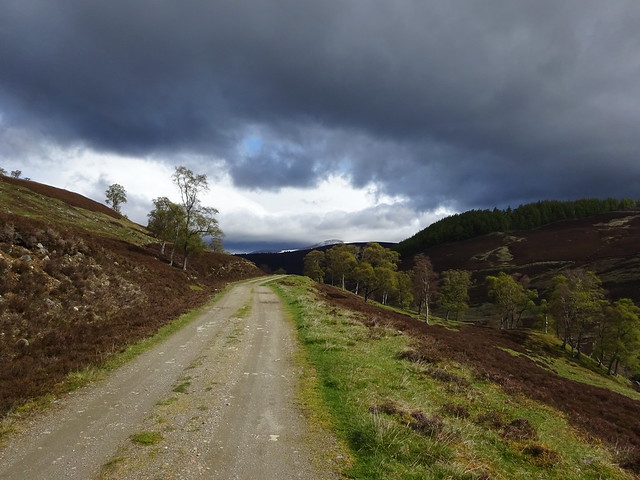 Looking back down Glen Ey 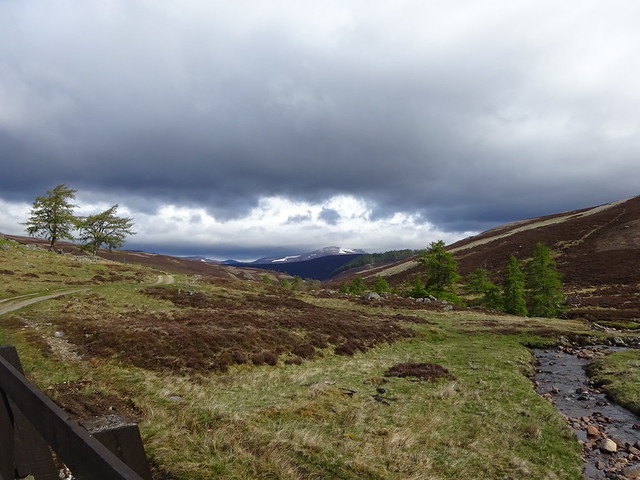 Looking back down Glen Ey again

Near Altanour I spoke to a nice couple who had been wild camping further up the glen. They’d had the most wonderful (if very cold) stay and had seen lots of wildlife. We chatted for a while about walking, munros and various mad challenges that people do. After saying our goodbyes it wasn’t very far anymore to the place to park the bike.

The track carries on past Altnanour, but there aren’t any opportunities to leave a bike out of sight there. I had a quick chat with another walker who had also cycled in and was waiting for his friends who were still on their way.
The eye gets drawn to the big hills An Socach, and Beinn’s Iutharn Bheag and Mhor. Carn Bhac was out of sight. I followed the track from Altanour Lodge which goes on for another kilometer or so. Then there is a path following the river. It does fizzle out but by that time Carn Bhac comes into sight. 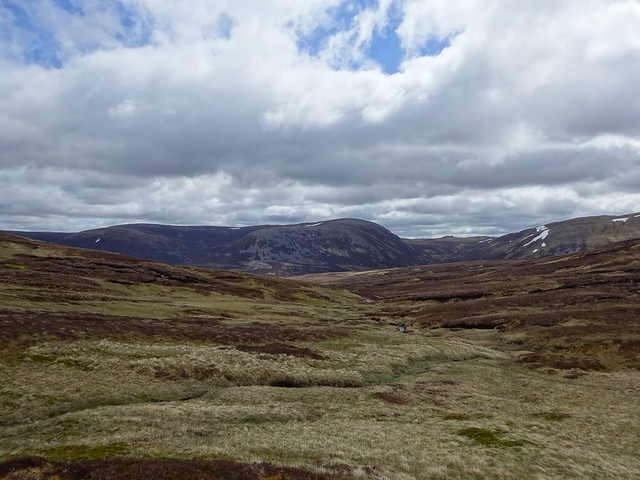 Looking back towards An Socach

Further on there is a path up the heathery slopes, then a small boulder field and finally the summit plateau of Carn Bhac. The views towards the Cairngorms got all the attention. That was where I was going to walk for the next four days. And the amount of snow still on the hills did concern me…. 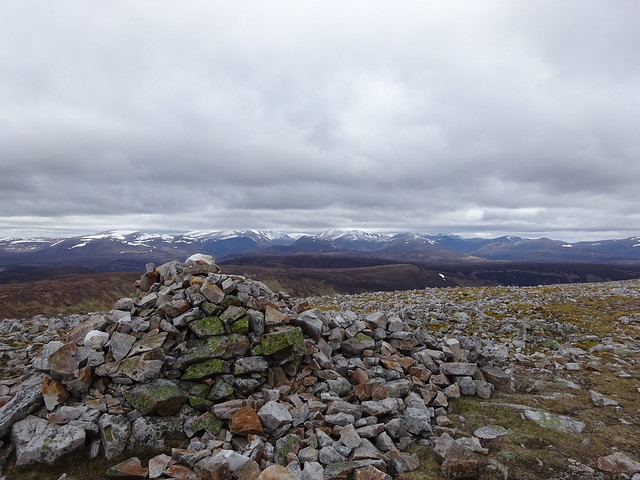 Back into the glen and across the Alltan Odhar and Allt Beinn Iutharn the ascent of An Socach started. My line of attack was straight up the steep NE nose. 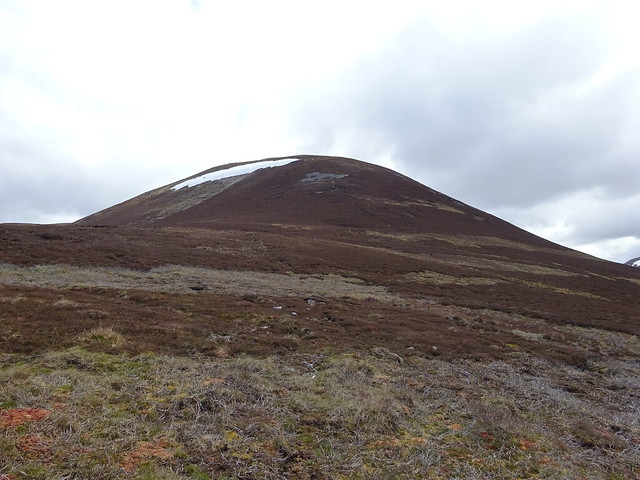 That’s the way up

There was a path of sorts where others had gone before me. Where the slope gets very steep various paths branch off. I reckoned all alternatives would be equally steep so I continued straight ahead, following a path that soon petered out. At the end of the steepness there is a helpful cairn to help relocate the direction of descent on the way back. The continuation of the walk was uneventful with the gradient easing. I made mental note of the ridge bending to the SE, just in case the cloud came down. It was cold on the summit, so after a few pictures and a snack I headed down. 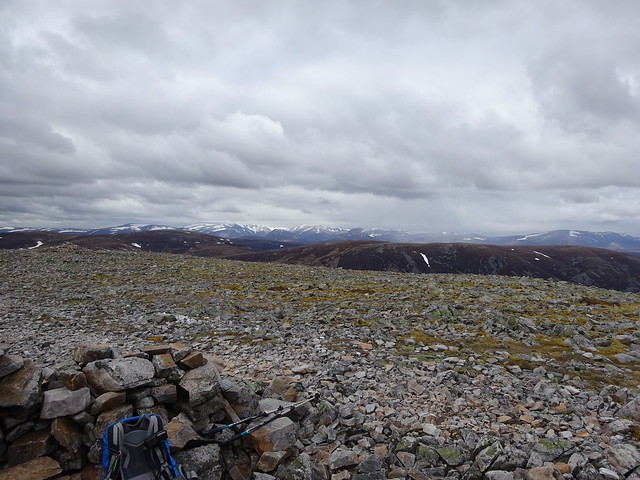 Summit An Socach, looking towards the Cairngorms 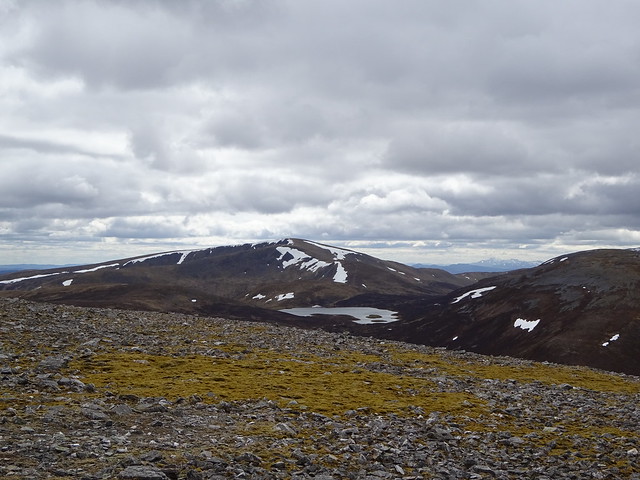 I found the cairn marking the descent without trouble. The way down wasn’t too bad, thanks to the heather which acted as a brake. I soon came across a path again which I followed to the lower reaches of the hill, where it petered out as well. There is an intermittent path (very boggy) along the Ey Burn that leads to the footbridge. The burn was a great sight from the bridge with water cascading down the rocks. 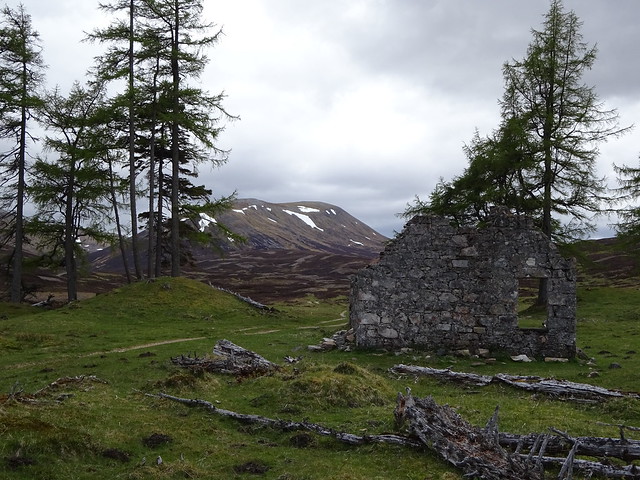 Back at Altnanour Lodge I had a few sandwiches before jumping on the bike. Turns out that the track wasn’t as flat as it had seemed on the way in. Wheeeh, coasting downhill to Inverey, great fun! 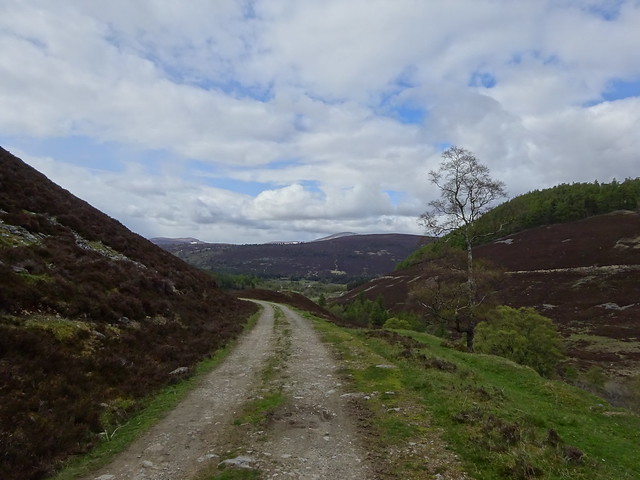 The ride on tarmac to Braemar was also done in a jiffy, so I made it back to the bike hire place just before closing time. (Although it wasn’t a problem to drop the bike off after closing time, they had said in the morning).
I now had a long drive ahead of me to Glenmore. It probably didn’t help that I took the scenic route for this: the B976 from Crathie, then the A939 to Grantown-on-Spey. But the amazing empty and barren landscapes in the evening light were well worth it. 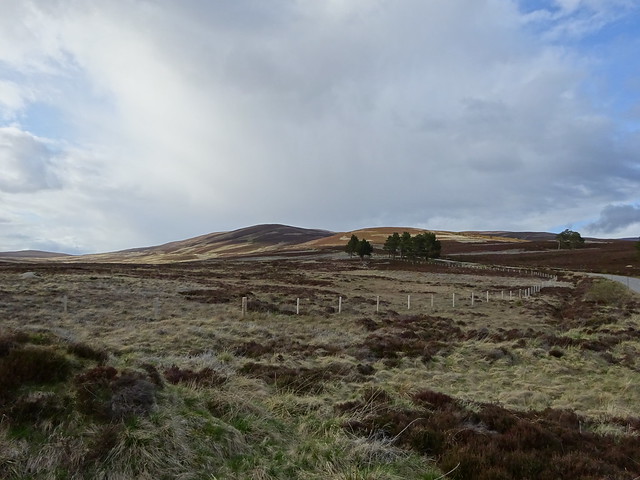 Somewhere on the way 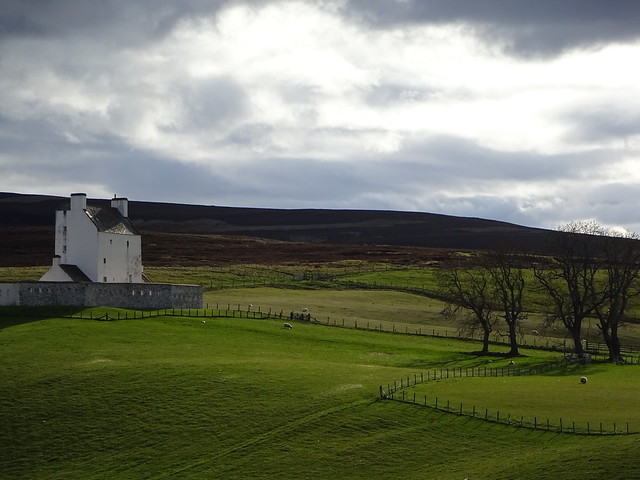 saw zilch when I was up An socach

Great pics of a good day.

Only been up Glen Ey once (last August to do Carn Bhac) and thoroughly enjoyed it, especially higher up the glen when close to the slow running river. Only problem I had was a huge grouse shooting party so had to take a different (but easy) route back down to Altanour Lodge.

Your route for An Socach looks more interesting than mine as I just did it as a single hill from the Glenshee side.

Don't think I'll be climbing these particular hills but the glen in general looks worth a visit. Mind you, with the approach sounding like an easy cycle they might be summer possibilities. Good view from Carn Bhac.

saw zilch when I was up An socach

It’s always nice to have views. My list of hills bagged in mist is rather long!

Gordie12 wrote:Great pics of a good day.
Only been up Glen Ey once (last August to do Carn Bhac) and thoroughly enjoyed it, especially higher up the glen when close to the slow running river. Your route for An Socach looks more interesting than mine as I just did it as a single hill from the Glenshee side.

Yes the slowly meandering Ey Burn is fantastic. Not sure about my route up An Socach being interesting, it was brutal for sure!

litljortindan wrote:Don't think I'll be climbing these particular hills but the glen in general looks worth a visit. Mind you, with the approach sounding like an easy cycle they might be summer possibilities. Good view from Carn Bhac.

The track is really good and makes for an enjoyable ride.