The Cairngorms kept me well entertained over the winter months with some fun planning. I knew they would make for long days, which I really don’t mind at all. But if this also means walking in and out via the same route three days in a row, then that’s definitely less fun. So I was looking to devise a circular route with an overnighter. After much pouring over maps, tinkering and re-shuffling I came up with this expedition and a wild camp in Glen Luibeg:


Eastern Cairngorms.gpx Open full screen  NB: Walkhighlands is not responsible for the accuracy of gpx files in users posts
The weather forecast was not great for today (or tomorrow). Headline for the Cairngorms NP was severe upland gales, snow and low cloud. And this is how the Gorms had looked yesterday from Carn Bhac: 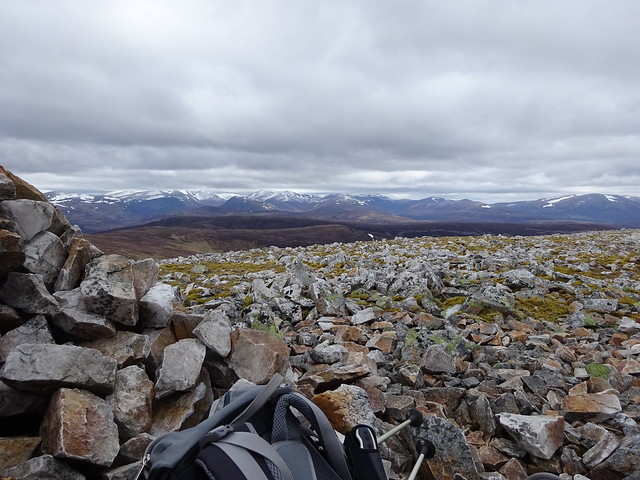 Fancy walking that in the forecasted white out conditions. Not really.
After much uhm’ing and ah’ing, I decided to set out anyway with kit for an overnighter on my back, just in case the forecast was wrong. I felt I should at least make the effort to go for a walk, even though I might not get very far. I parked at the Coire na Ciste car park and followed the path to Lochan na Beinne. From there another path heads to the small patch of forestry up to the bealach south of pt 737. 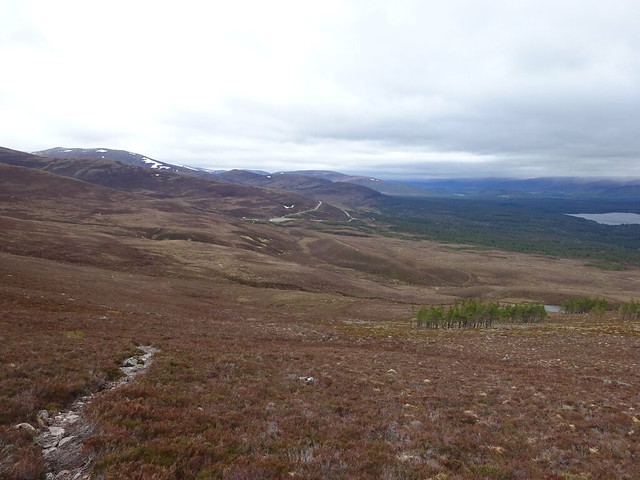 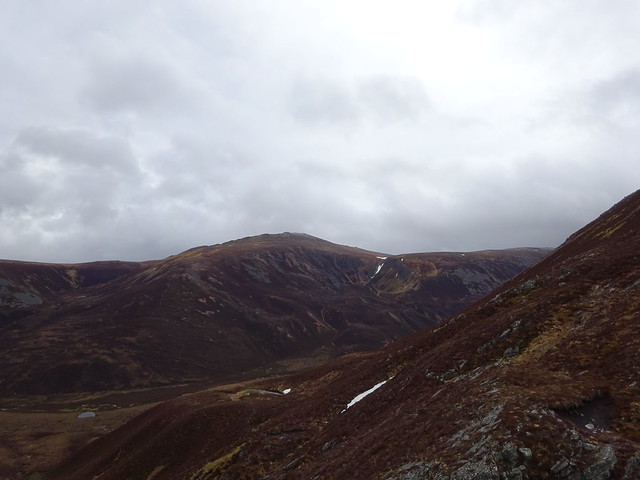 The path goes to the north of the cleft and then down into Strath Nethy, but peters out halfway down the hillside. I had to take my boots off to cross the burn. Then it was a steep pull up to the NW ridge of Bynack Beg. Plenty of paths contouring the hill, less paths going up (initially). 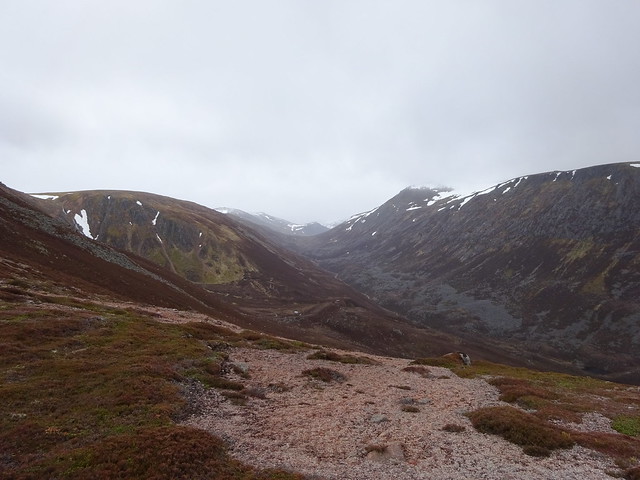 Strath Nethy on the way to Bynack Beg

So far the route had been relatively sheltered, but on the way up to Bynack Beg the elements made themselves known. I stopped to put on waterproofs against the wind and snow. I ate a few sandwiches at the summit of Bynack Beg, but it was nigh impossible to find a spot out of the cold wind. The continuation to Bynack More looked very steep and rocky, but this turned out to be a trick of the eye, due to the snow and a bit of mist. It was even windier on Bynack More, but at least it was no longer snowing. I clambered up the first pile of rock, thinking it was the summit. But with no cairn, that was unlikely. I had more luck at the next pile. 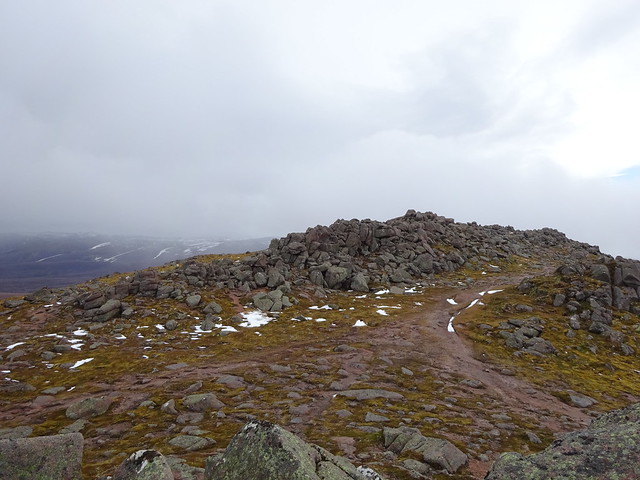 Looking at the summit 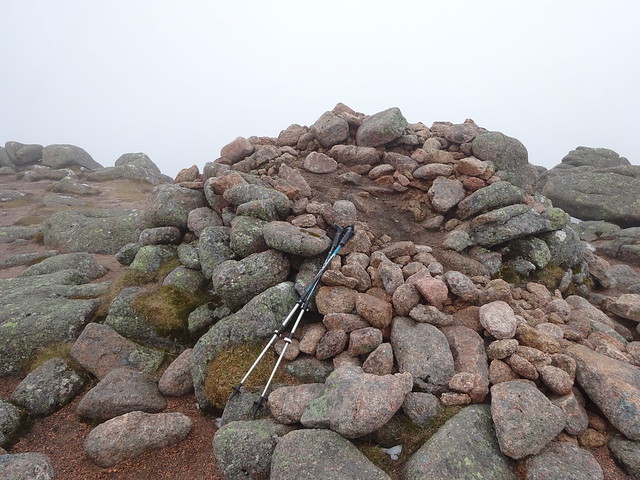 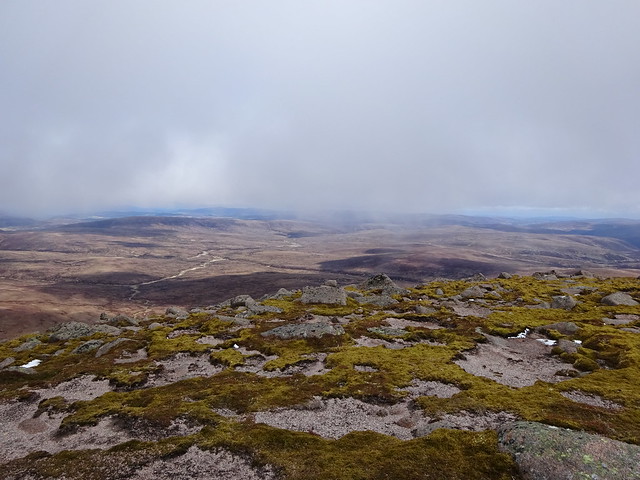 I then went in a SE direction towards the barns. Leaning sideways into the wind I staggered downhill. The walking poles had become nasty trip hazards and were completely useless.
My watch said it had taken me 4.5 hours to get here.

By now I really should have been ascending Beinn a’ Chaorainn. At this pace I wouldn’t arrive in Glen Luibeg until very late. Hmm, better cut my losses and retreat. 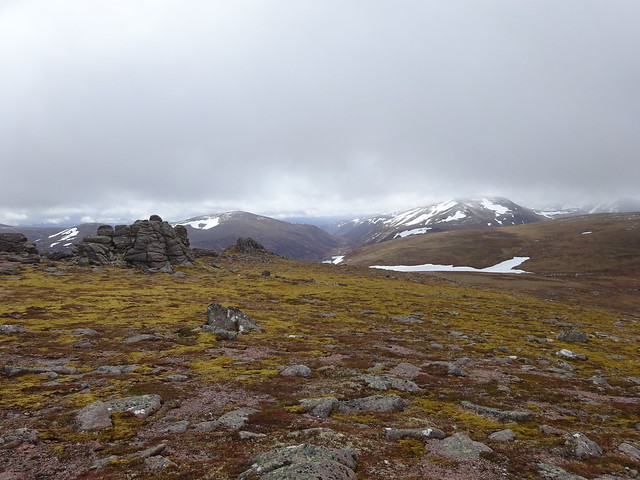 I struggled on the way back to Bynack More. Energy spent on staying upright, can’t be spent on moving forward, so progress was again slow. Back at the summit of Bynack More I had a short sandwich break, before getting pummeled by the wind again. My return route was the traditional route for Bynack More in reverse. The descent down the north ridge was rocky and fun. 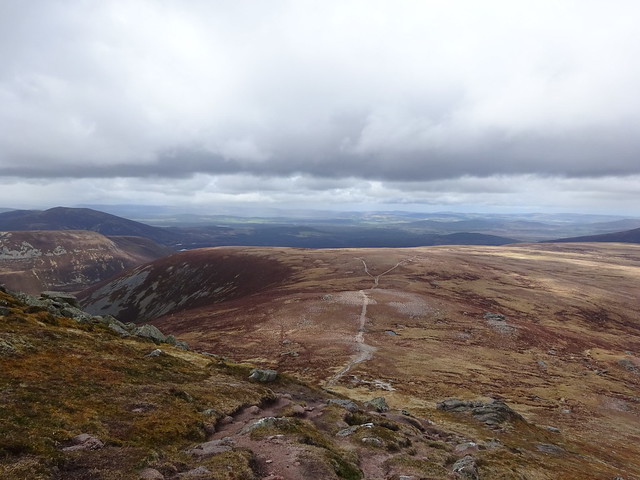 Still, care was needed in the strong wind, even though I was on the sheltered part of the hill. Where the incline eases three men and a dog were running uphill. They stopped for a short chat. I asked about their plans. ‘Oh, just nipping up Bynack More!’ 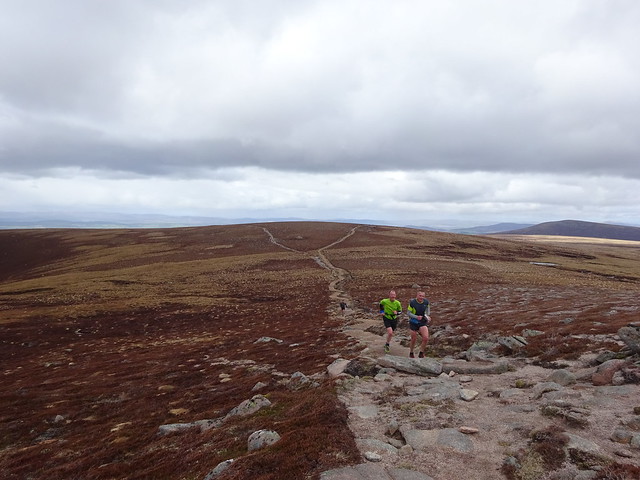 The walk back to the car was a doddle (though a long one) on the great path. When I last was here (some 10 years ago) I’m sure it was a lumpy track, so huge improvement works must have been done in the mean time. 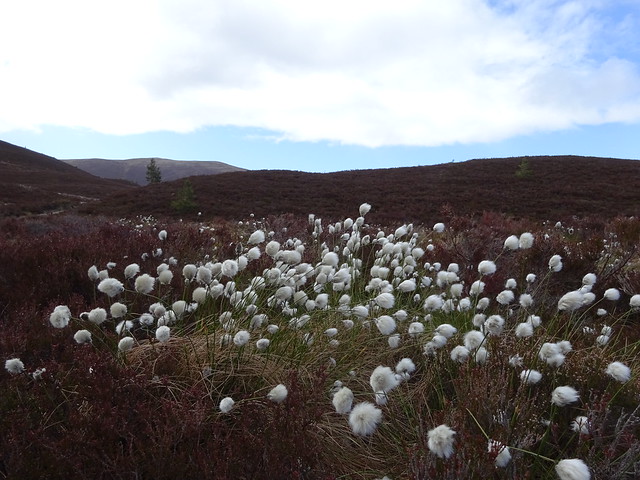 At one point on the descent I heard a soft squeaky noise. It was a ptarmigan chick on its own (unusual to see them without a protective parent) hurtling down the drainage ditch. The slope was steep and its wee legs couldn’t keep up so it tumbled down in a fluffy ball until somehow it managed to get out of the ditch and then noisily fled into the heather. 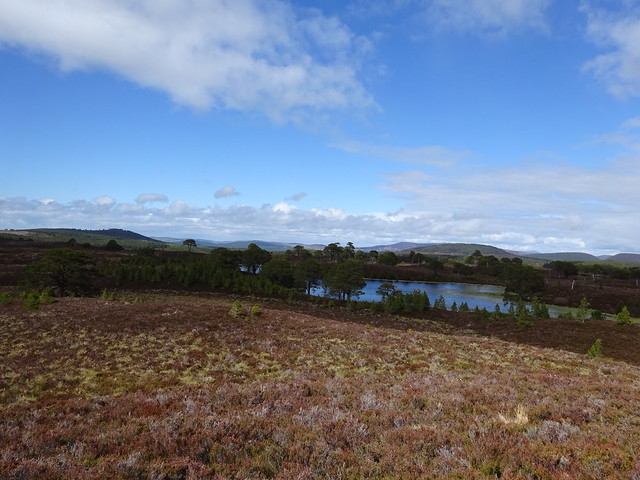 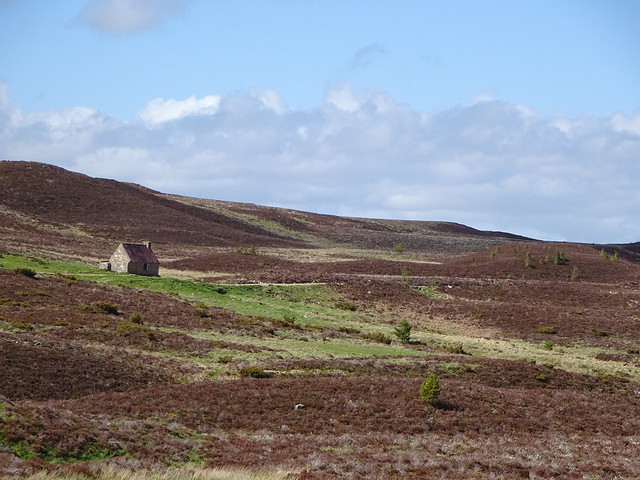 It was still quite windy and only past Strath Nethy could I shed a few layers. It turned into a lovely afternoon for walking . The group of three runners and the dog passed me again at the bridge. They were still very chipper. And I enjoyed my saunter back to the car with views of Loch a’ Gharbh-choire, Ryvoan bothy, the (not so) green lochan and the cool pine forest of Glen More. 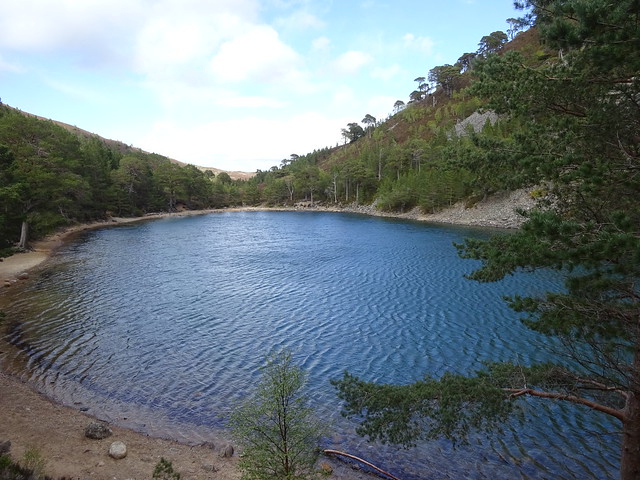 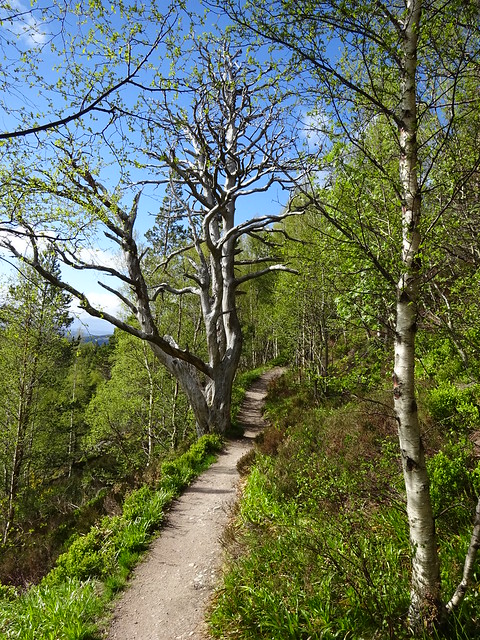 When I hit the ski road again, near the hairpin bend, the 3 piste cycle challenge (www.3pistescycle.co.uk) was still in full swing. At one point I overtook a cyclist, hahaa! But it turned out he was just allowing his mates to catch up.

Back at the car I was reminded of the reason I had turned back. That wind! Well, my day had turned out much better than I had anticipated in the morning!

Bynack More.gpx Open full screen  NB: Walkhighlands is not responsible for the accuracy of gpx files in users posts

Shame you had to change your plans but better to be safe than sorry - walking in a strong wind can be really knackering.

You still managed to get some good photos - liked the last one of the path through the woods. I've done a lot of walks around this area but don't recognise it.

I felt very wussy though when I saw the runners, and then it turned into this lovely warm afternoon! But the wind was still very strong when I got back to the car park, so it probably was a good decision.
The last picture is somewhere along the path west of the ski road.

Good to read of a different way up Bynack More - but that wind sounds no fun at all!

I can recommend this approach to Bynack More (in less windy conditions though). The views over Strath Nethy to the Cairngorms are quite something.

Brings back fond memories for me, Bynack More was my first Munro with my dad

Thanks Beaner, glad to have brought back good memories!

I see you recently finished the Cairngorms. I still have a few visits to make.