I was woken by the cold. I'd gone to sleep full of tea and warmth and not put my hat on, but there's no getting around it - the interior temperature of a Volkswagen tends to mirror the exterior. Pulling back a curtain I rubbed some semi-frozen condensation away but it was dark outside. My phone said 6am, so I put the kettle on and opened the 'Skye Scrambles' book. From Sligachan the obvious choice was the west ridge of Sgurr nan Gillean, one of my favourite peaks and by a challenging new route. I was, if truth be told, excited and apprehensive.

Tea, more tea, porridge, get dressed, make lunch and set off just as the sun was rising. This was my first mountain expedition in Scotland at this time of year. How nice it was to be able to start at sunrise without getting up at stupid am

I've never started at sunrise before. I will try to do it every time from now on because this is what it looks like! 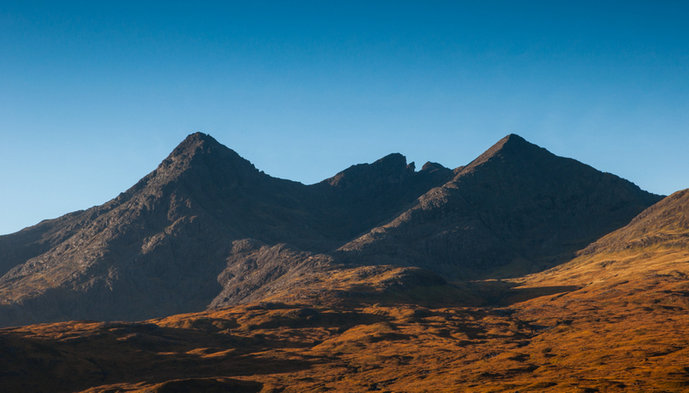 The reason for the cold morning soon became clear. There was not a cloud in sight and a gentle north-easterly was thrumming across the moor - just enough to make vigorous exercise in thermals and a fleece a pleasant experience. This was bliss. The astonishing light made the colours of early autumn ring out in full and the distant bellowing of stags accompanied the early morning mist as the first warmth of the sun boiled it out of Glen Sligachan. 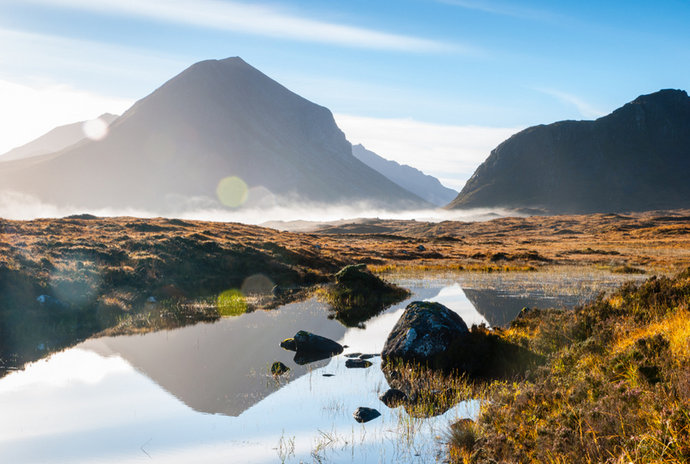 To access Sgurr nan Gillean's west ridge, one needs to head for the Bealach a Basteir via Coire a Bhasteir. This is a route I was familiar with as I'd climbed Am Basteir twice before. Familiarity in this case bred nonchalance as I sauntered up the path, said hello to a stag, tried to make friends with a sheep and then launched myself up the slippery scree towards the slabs that protect Coire a Bhasteir from the outside world.

It is, in theory, possible to access Coire a Bhasteir from two directions. The intrepid route - which I've looked at but never tried - is to search for a route along the wall of the Basteir gorge and scramble upwards. It is, apparently, possible. So I've read. You'd need to be a nutter to try it

I don't have a photo of it because it scares me. The normal route is to scramble up the slabs that form the lower eastern end of Sgurr a Bhasteir, and sort of roll over them into the Coire. Had I taken to the trouble to remind myself of the route I would have been reminded that it's very important, not to say essential, to stay low. Keep the gorge in sight, don't be tempted to gain height here. Yeah, I was having too much fun... the rocks were a bit damp and I was enjoying the rather ridiculous pleasure of walking upright on wet slimy rock (you can do this on Gabbro) and then slithering downwards like a child in stocking feet on a polished floor whenever I found some basalt. There's a geology nerd in me trying to get out.

Also, I was very distracted by the views 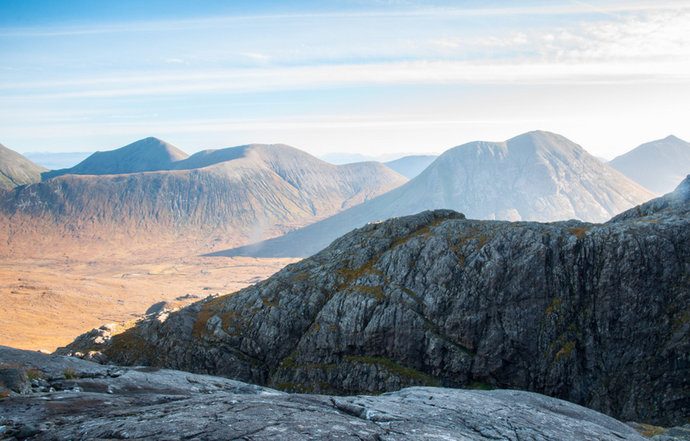 Across the Basteir Gorge towards Marsco 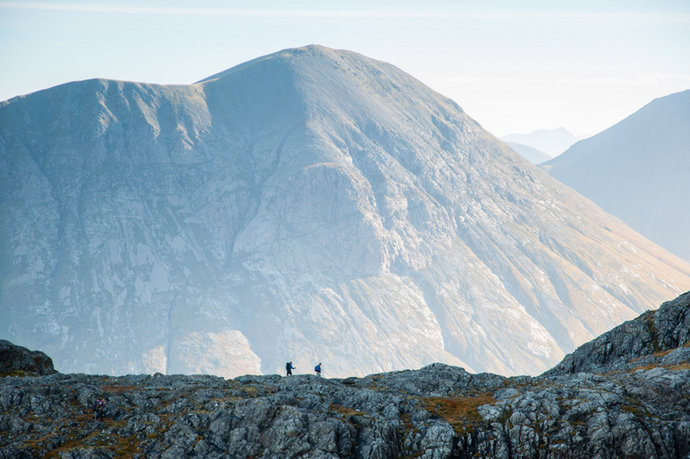 A group of guided scramblers heading for the pinnacle ridge 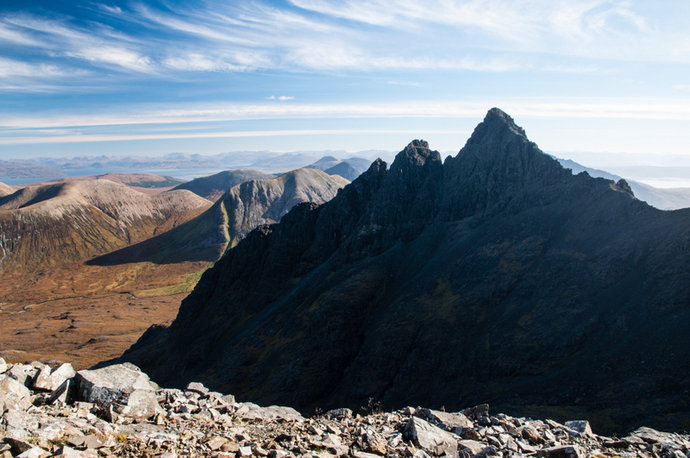 nan Gilliean and the pinnacle ridge

All of this is by way of excusing the fact that, over the years, I've had to come to admit that my navigational skills are... unusual. I can find my way *down* anything. You name it. Put me on top in the mist. In the dark. Blindfold me, I don't care. I'll have you back at the car and you'll never know how. And neither will I. On the other hand, going upwards is not my forte. Slogging up slopes my eyes are fixed 3 feet in front of me because raising my head takes more effort. I don't actually like walking uphill very much at all. Which is odd, considering how I choose to spend a lot of my free time. I genuinely believe that this is why I like scrambling, because it distracts me.

Anyway to cut a long story marginally less long, I went way too high up these slabs. I came up over the crest and saw lower Coire a Bhasteir well below me, and upper Coire a Bhasteir well in front of me. Several attempts at descent or traversing met the same fate - scree. Scree like walking on ballbearings. I'd forgotten how unforgiving the Cuillin can be. There was no way I was making it direct to my destination, so plan B was formulated which involved climbing up to the summit of Sgurr a Bhasteir, walking over to the unpleasantly named Bealach nan Lice, and traversing underneath Am Basteir - something I'd done before in the opposite direction.

It turned out that this was an enjoyable scramble. Not as hairy or exposed as the the WRNG (West Ridge of Nan Gillean, as I'd now started calling it in my head) but fun nonetheless. And it has to be said, the top of Sgurr a Bhasteir is a fabulous viewpoint. The Sgurr nan Gillean - Am Baster section of the ridge is pretty eye-catching. 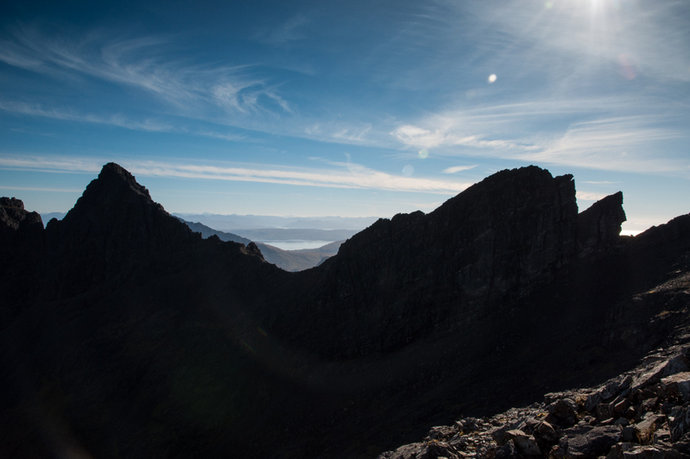 Sgurr nan Gillean and Am Basteir 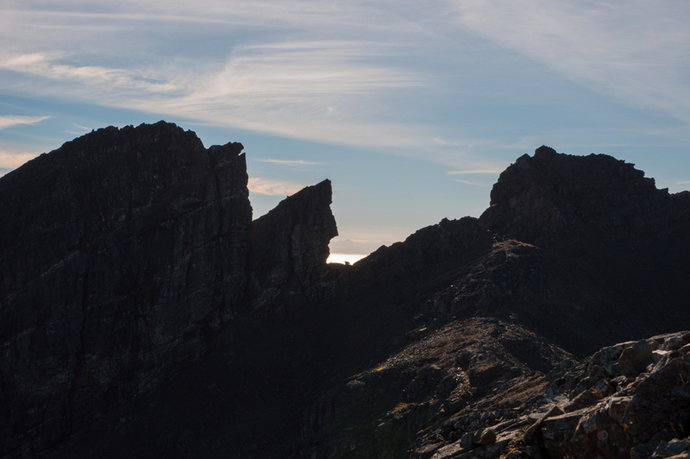 Am Basteir, the Basteir Tooth, and Sgurr a Fionn Choire 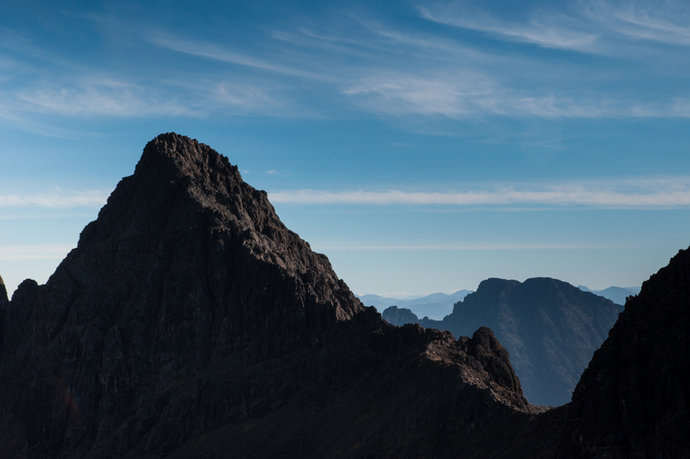 Sgurr na Gillean. The west ridge is at the point where the lit part and the shadow meet.

Having got to this point I realised that I had no further desire to be scroggling around on scree any more. The traverse under Am Basteir was something I could really do without. The WRNG could wait. The obvious destination from where I was, was the summit of Bruach na Frithe which also happens to be one of my favourite viewpoints. On the way over I scrambled up the side of Sgurr a Fionn Choire because the views from up there are pretty good too. 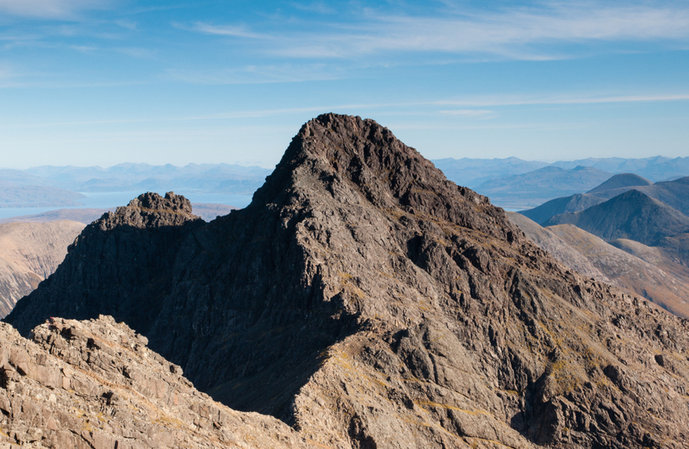 I traversed across the top of Sgurr a Fionn Choire and picked a way down its western side, which involved some slightly tricky route finding, but being a descent it proved no obstacle to me

From there the walk up to the summit of Bruach na Frithe was a pleasant walk with a minor boulder clamber near the top.

Brunch na Frithe is situated at the point where the Cuillin ridge changes from an east-west direction to a north-south direction, and such I have to say that I think the views of the Cuillin ridge from up here are probably the most complete. Nothing's too far away, everything's laid out in a panorama in front of you. But to begin with my eyes were drawn even further. The clear night, clear skies, high pressure, and clean north-easterly wind had made the visibility just incredible. To the east the entire Scottish Highlands were laid out like the most intricate relief map. I wasn't recognising distant peaks by the vague shapes of their outlines, I was for example recognising Beinn Eighe by the number of peaks on its ridge and the pattern of white quartzite scree rolling down its sides. The mountains of Wester Ross, Kintail, Lochaber, and Knoydart were laid out before me like a tray of sweets. It transfixed me, and a few others who joined me on the summit, for many long, blissful minutes.

I do not carry a long zoom lens, and have long since given up trying to take photos of distant peaks, but be fair, when you're in the Cuillin, there's plenty of photos close at hand. 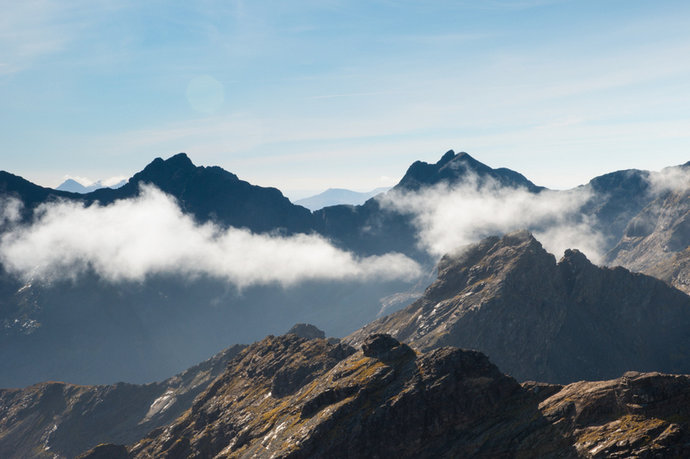 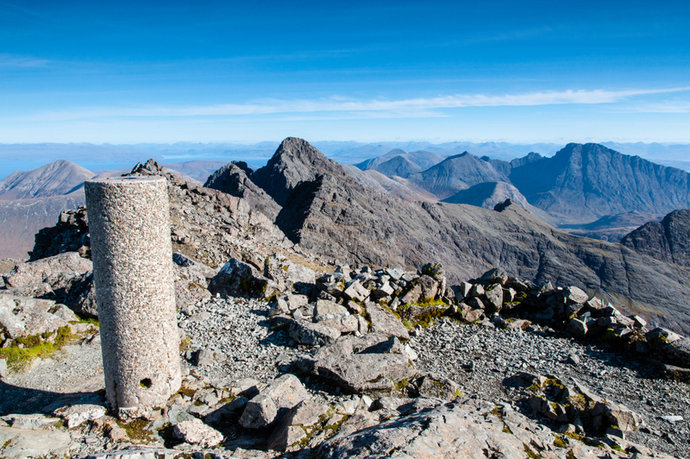 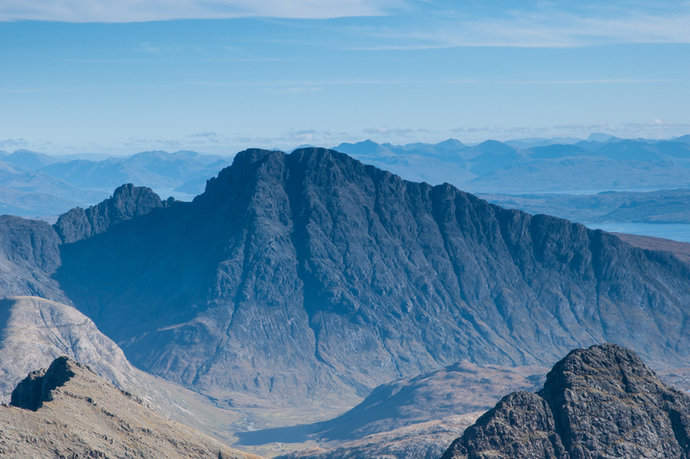 Bla Bheinn, with the mainland behind 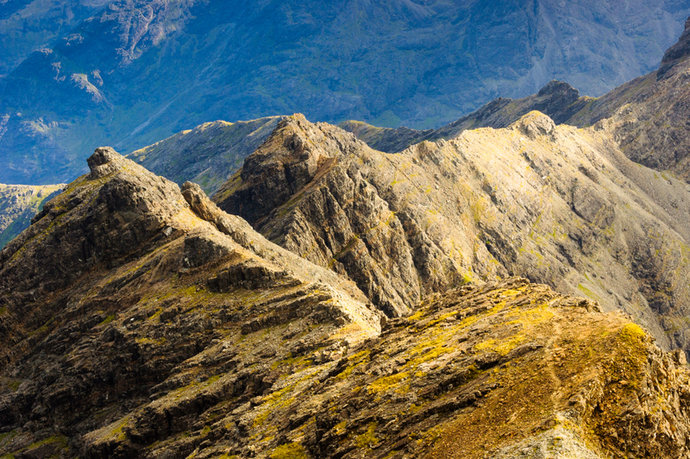 It was;t long before I was walking along that very path! Grinning like a child with a new bike I covered every available inch of ground. It was great scrambling for most of the way and I had the real feeling now of being on an out-of-the-way section of the ridge. This was probably better than the WRNG to be honest

I made it as far as I felt was safe and stopped for tea. But then photos happened. So cloud rolled in across the ridge, just thin wisps of cotton wool making the air cold and catching the light. 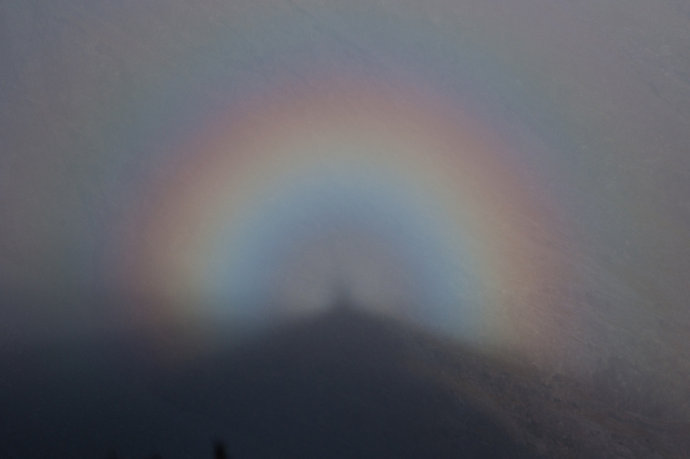 Brocken spectre around my head

This was a day that had everything. I returned to Bruach's summit and took one final look down the ridge before setting off home

I returned down the easy descent route through Fionn Choire - it's a bit slippery near the top but quickly gets easier provided you orientate yourself early on and find the river crossing. Following the path back towards Sligachan, the sun set behind me and cast a wonderful light on the Red Cuillin

And on Bla Bheinn 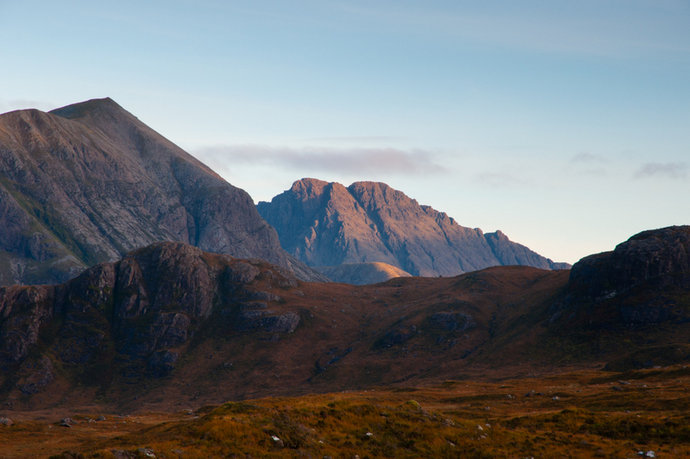 And that was the end of a full day in the Cuillin. One of my best. Mountain days like that, when you just make it up as you go along, are probably the best. The feeling of freedom, the confidence you gain in yourself, and the memories you take away are things no amount of 'normal life' can take away from you. They are days to be treasured, and therefore times to be sought.

amazing photos -Skye was high on my priority list this yea but has been shifted back a year - thisreport reminds me of why I need to get back ASAP:)

Stunning photos. Like the one of (what I think is) Marsco reflected in Glen Sligachan with sun spots in it. I also got a Brocken spectre on Cul Beag this week - but don't have as good a camera as you!

Brilliant photos; the Brocken spectre is amazing. I'm sure you'll love the west ridge of Gillean when you get another chance to do it - exposed on the pinnacles but not difficult.

Stunning, makes me want to go back to Skye now!