A delightful stroll in the Moorfoot hills

A delightful stroll in the Moorfoot hills

I decided to go and see my sister's new place in Roslin this weekend, so I was sure I'd squeeze in one of my remaining Southern Uplands Grahams. Laura was busy and unable to join me, and the weather forecast looked a bit iffy, so I decided to go up Blackhope Scar. The Glensax round including Dunrig looked appealing enough that I might be able to persuade Laura to come with me sometime, so I saved it for a better day.


Moorfoots.gpx Open full screen  NB: Walkhighlands is not responsible for the accuracy of gpx files in users posts
I drove down to Edinburgh with my wife (who was running a 10k then going home again), so I made a plan which didn't need the car. An hour on the Peebles bus saw me at Eddleston for 11:30am, where the rain was already on and there was not much inspiration for walking to be had. Up the hill and through the fields behind the primary school led me to Boreland farm, where the proper ascent to Dundreich began. 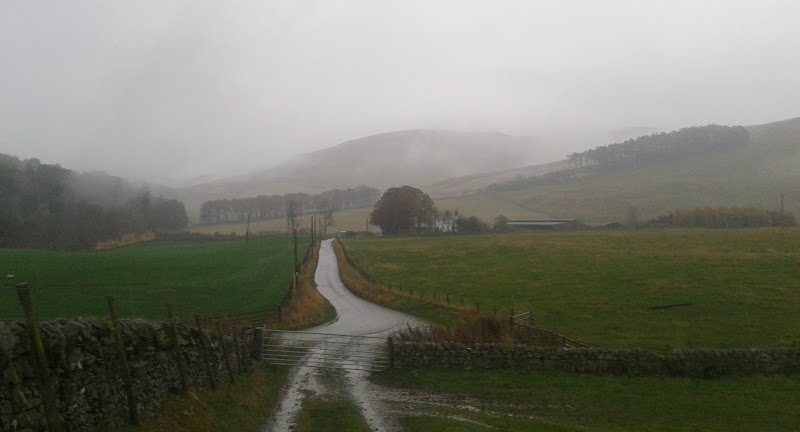 The track zigzagging over Milky Law was indistinct lower down so I headed for a more direct route on the other side of the Harcus Burn. There was a faint path and the going was firm underfoot the whole way to the plateau. Although the weather meant I was getting wet, I found Dundreich to be much drier and firmer than it said on the tin.

I joined a quad bike track which led to the summit. The cloud briefly parted in the direction of Eddleston but it was too grey and gloomy for a photo. I took a bearing and set off cross country for the edge of the Bowbeat windfarm. This was more like the sort of terrain I had expected, but not too bad - there were even a couple of intermittent tracks to follow. Still, I was glad to reach the edge of the windfarm and the nice easy tracks which took me around the next mile or two of the round. Some of the turbines were more disconcerting than others, making random creaking and grinding noises above my head. 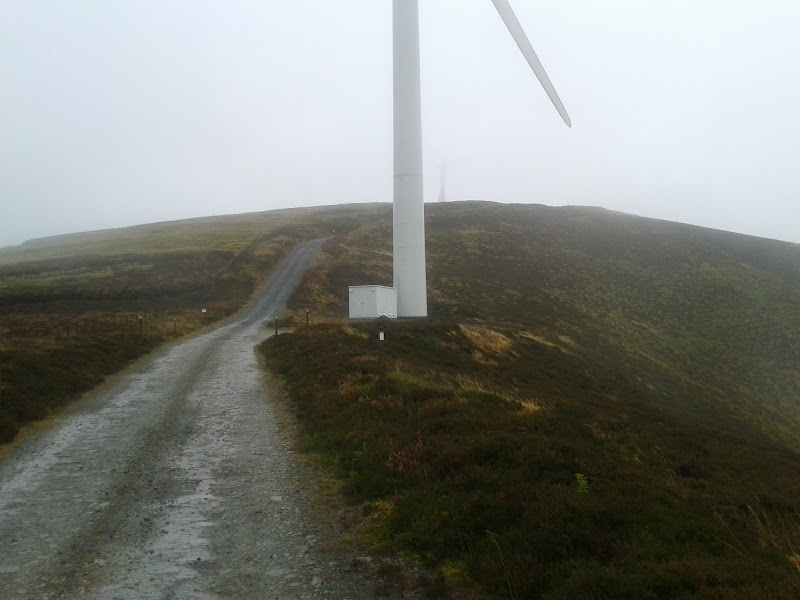 A 2 minute diversion from the track at turbine 15 led me to the (non) summit of Bowbeat Hill. True to Donald form, the precise summit was pretty much impossible to distinguish in the flat springy heather.

Once at the end of the windfarm, it was back onto rough moorland. although there was another quad bike track to follow. The clag lifted a little here and the sky lightened. A short section of hag hopping and a fence junction led to the trig point of Blackhope Scar. This is probably the only Graham I have left that I hadn't been able to work up any enthusiasm for (I remember looking at it from the similarly featureless Windlestraw Law and deciding not to bother with it last summer), but it didn't really turn out to be as boggy or haggy as I had feared. Carn nan Tri-tighearn in Strathdearn still holds the honour of haggiest hill I have been up. 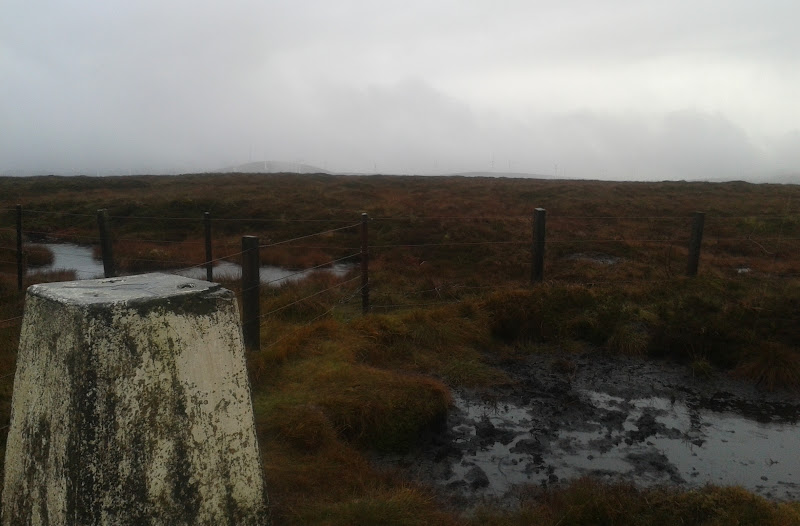 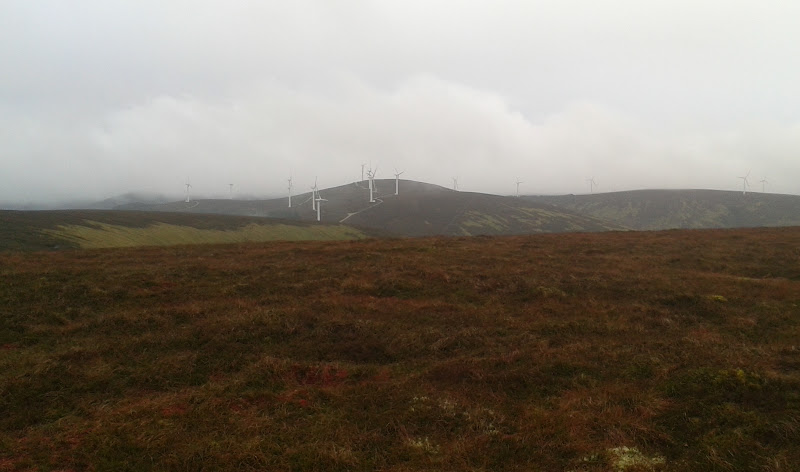 The haggiest section was the first part of the descent - in fact looking back at the summit, the peculiar pattern of hags looked like a rash of warts. Once on the vehicle track dropping into Clinty Cleugh, the weather and scenery improve dramatically. This and the section of South Esk that I followed out to Moorfoot were as good as any of the nicest Southern Uplands glens. Approaching Moorfoot, the sun even came out on the fields beyond. 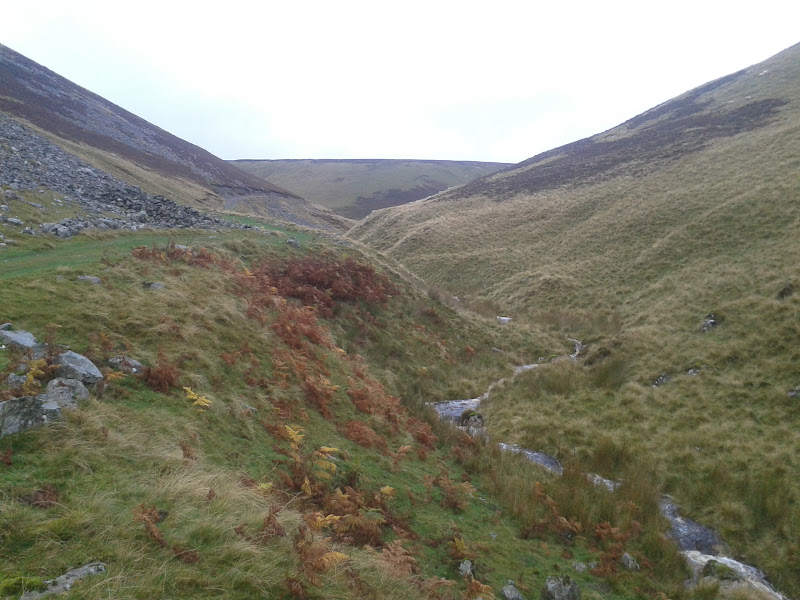 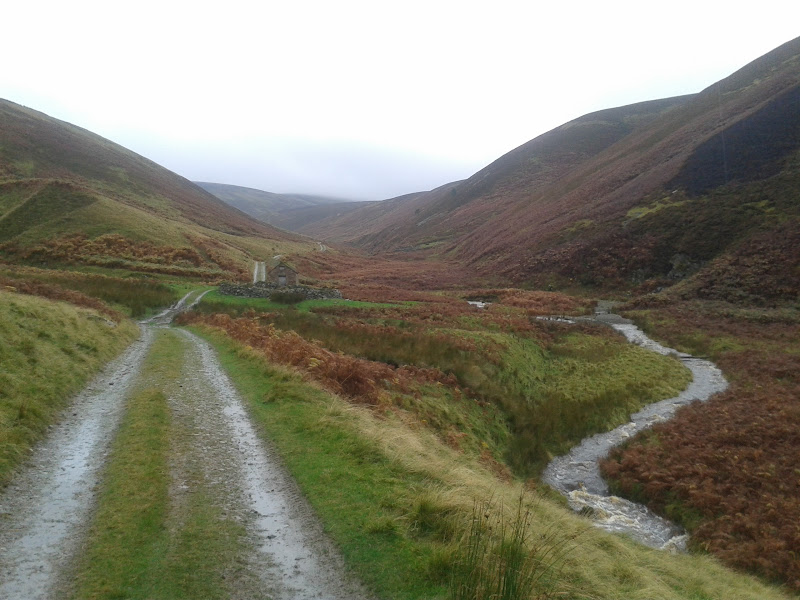 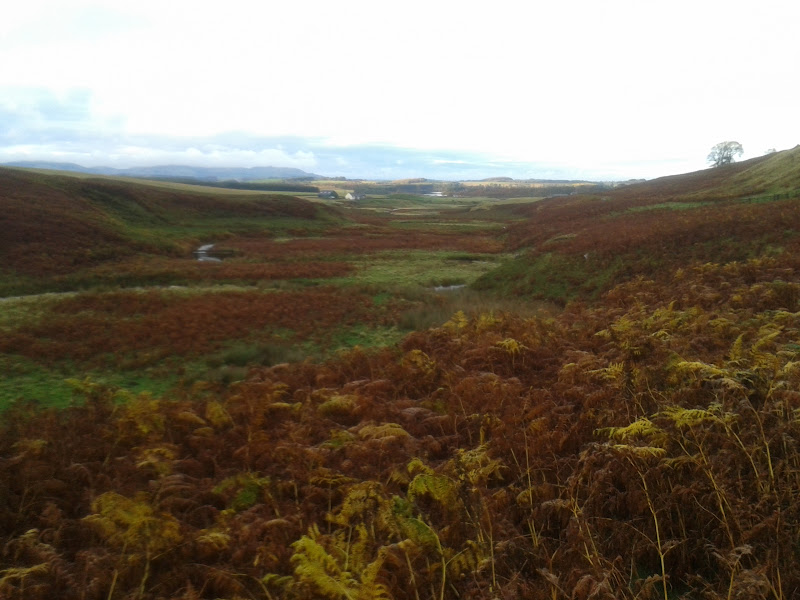 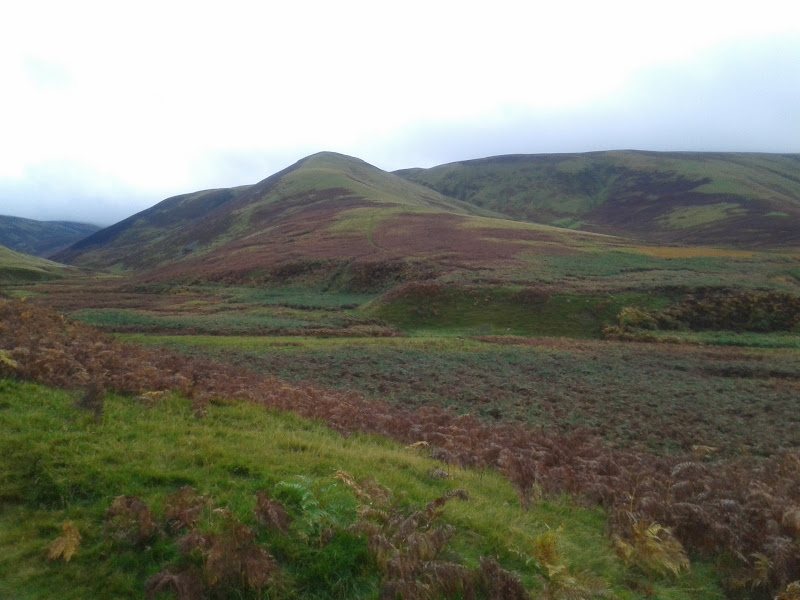 Gladhouse Cottage with the Pentlands behind: 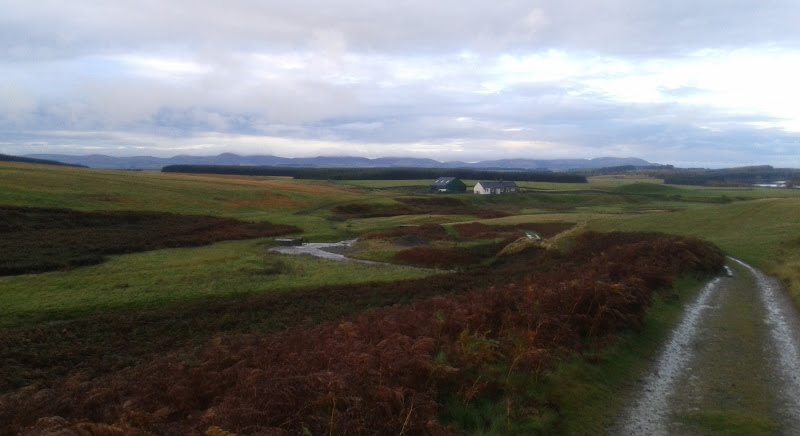 Gladhouse Cottage and the Moorfoot Hills: 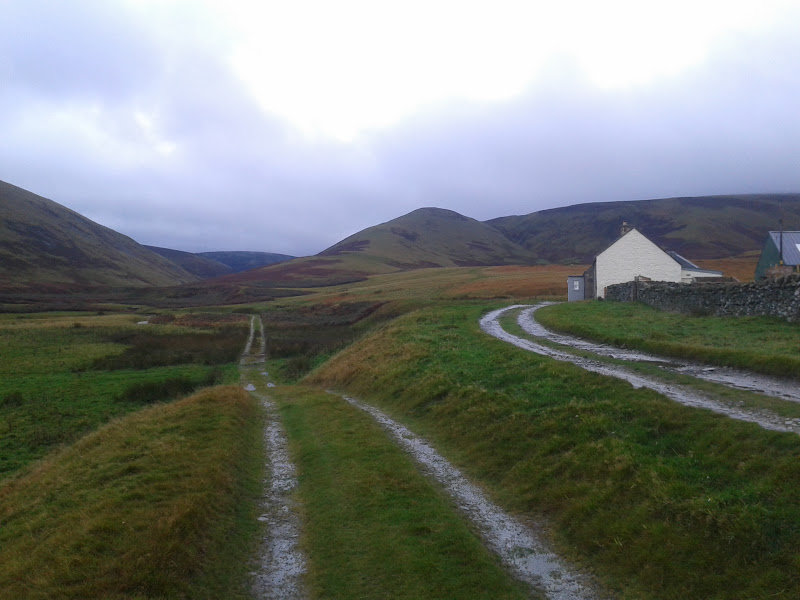 From here, it was an uneventful tramp past Gladhouse Reservoir and back to the A703. I met the first people since getting off the bus on this road. 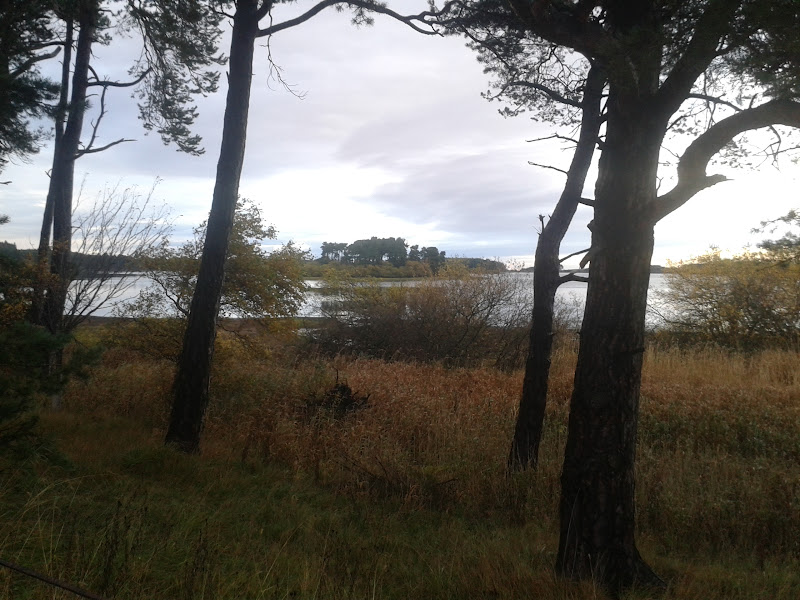 Despite it clearing up and only being 4pm, it was surprisingly dark. I checked the bus times (pretty good service on this road - every half hour) and decided if I walked fast, I could reach the road just in time for the 4:45pm bus. I managed this almost to the minute.

Fortunately the bus route goes within less than a mile of Roslin, so it was barely a 15 minute walk to Laura's new place.

If I lived in Edinburgh I'd probably be out in the Moorfoots fairly regularly - in the right conditions (hard snow or evening sunshine) some fine walks could be had. But I can't really see myself returning there from Inverness - I have my own peat-haggy hills much closer to home

. The next day's wander round Roslin Glen was more interesting on the whole.

Collaciotach wrote:You manage to make the most out of what initially looks like humdrum hills

They initially look like humdrum hills. Then you get to experience various kinds of hell. I was back last week for the first time in 5 years. An absolutely perfect day and a battered body emerged afterwards. You should try them with spring snow and deep waterlogged peat-hags.

I'm an Edinburgh dweller, and they're a last resort after the Pentlands, the Manors, the Ettricks, the Ochils, Arthur's seat and the top of Leith Walk, even the Lammermuirs. I agree with Malky hard snow'd be the ideal underfoot condition but we don't get that too often and then the pecking order stays much the same as above.

Thanks for posting this Malky. I was on Dundreich 3 days later looking to take a group onto these 3 Donalds. My plan is to park at Gladhouse resorvoir then use Clinty Cleuch to Blackhope, Bowbeat then Dundriech but returning to the track. You've given me a good idea of what to expect on that route - cheers.

'A delightful stroll in the Moorfoot hills'- I hope you are being ironic calling the Moorfoots delightful, in anything other than a hard frost, I have found them hard work and sometimes just plain evil with the glutinous peat and deep bogs. I'm absolutely with weedavie on this.

I agree about the turbines on Bowbeat Hill, they make the most alarming creaks and groans, last time I was there it was quite windy and some of them must have exceeded their maximum operating speed and there would be a loud crack, the ends of the blades would fly out and the blades stop, after a few minutes the ends would click back into place and they would start to rotate again.