Beinn Iaruinn is the highest of four Corbetts surrounding Glen Roy and its famous parallel roads, and I had the perfect November day to climb it. It seems the good spell without stormy weather has been timed perfectly to preserve the autumnal leaves on the trees this year. As a result I had to resist constantly jumping in and out of my car to take pictures on the journey over from Deeside! 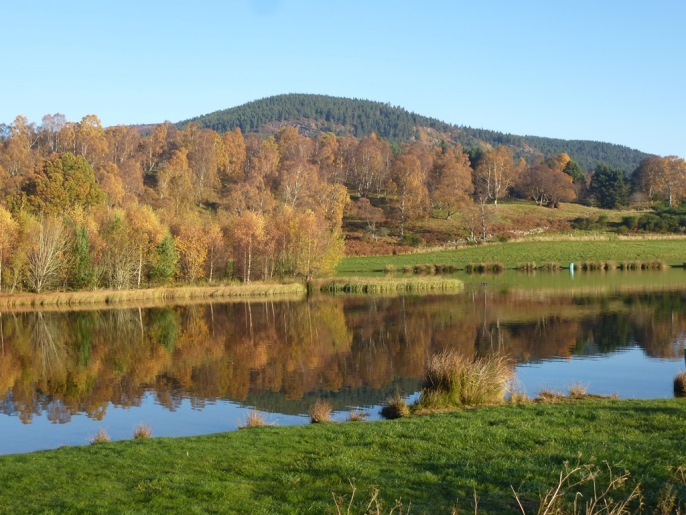 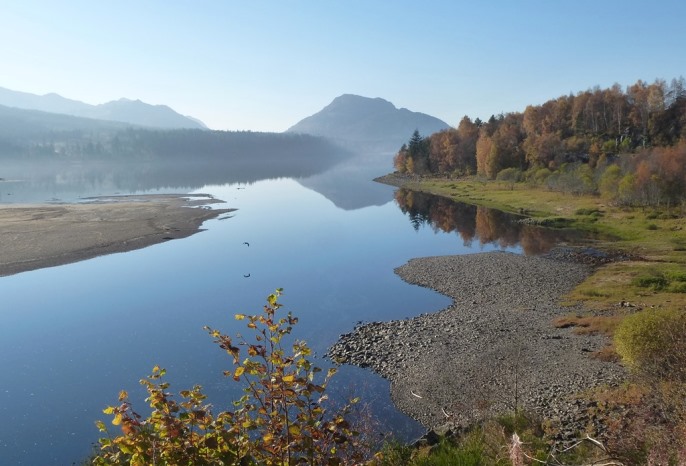 Heron takes flight across the waters of Loch Laggan

Approaching Roybridge, I caught a glimpse of a churchyard perched above the road. I u-turned having driven half a mile past the signed entrance to Cille Choirill - I just couldn't resist the opportunity. As it happened I found a spot amidst some bracken for a breathtaking view of the church perched above a dazzling array of fiery autumnal colours. My finger hardly stopped clicking on the camera before I dragged myself away 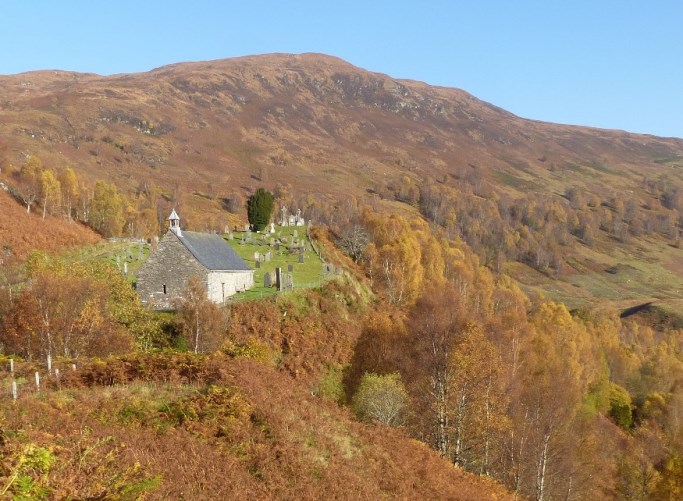 
I'd been undecided on the day's target, but stopping at a Roybridge café shop, “Darwin’s Rest”, swung me towards exploring Glen Roy for the first time. Charles’ old stomping ground did not disappoint. The autumn colours were flamboyant. The road itself a narrow, meandering roller-coaster, clinging to the hillside in parts. Spectacular all round. 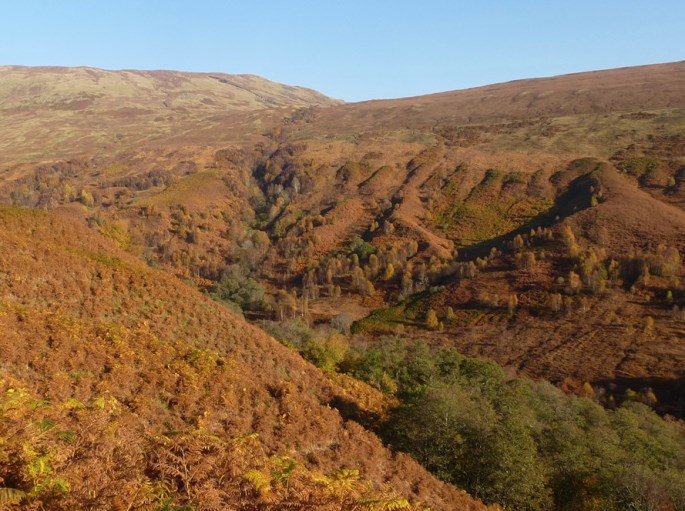 Stunning colours in the lower reaches of Glen Roy 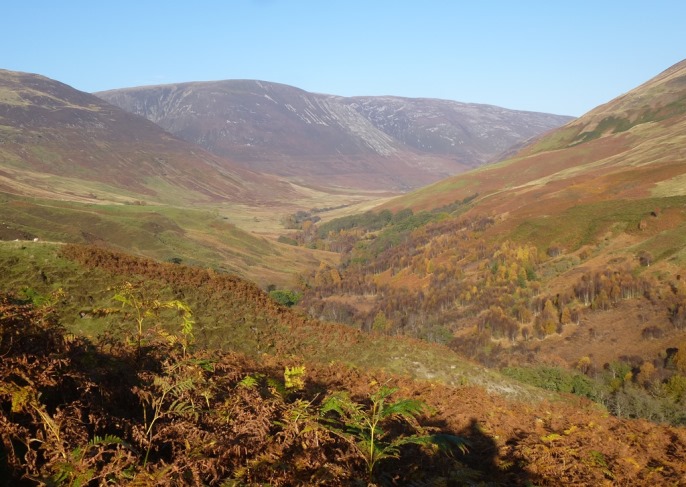 My day's target - Beinn Iaruinn - from the viewpoint along Glen Roy 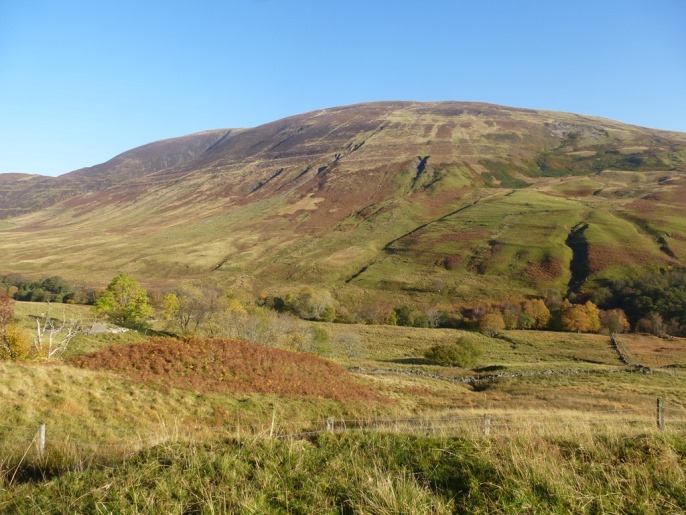 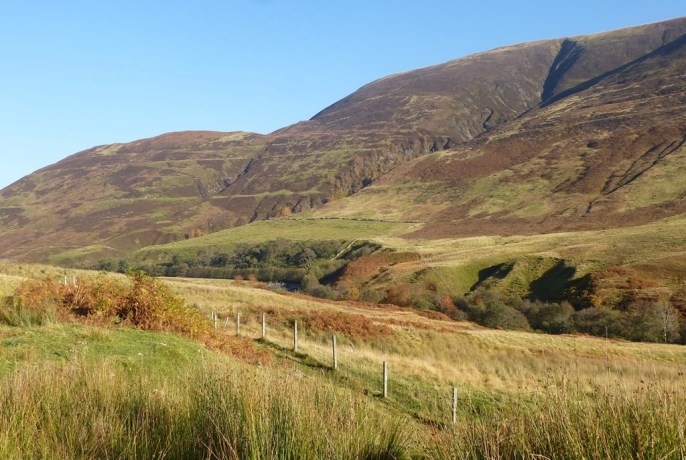 I parked at the base of Beinn Iaruinn's steep east-facing Coire nan Eun (of the Bird), where the burn draining it is bridged by the road; a shortage of time ruling out a longer traverse this time. I began along a small gravelly path on the north side of the burn, but soon crossed to attempt the southern edge of the corrie. Here the gradient steepens to a craggy step, which looked a more invigorating challenge than the tamer - but still steep - northern flank. 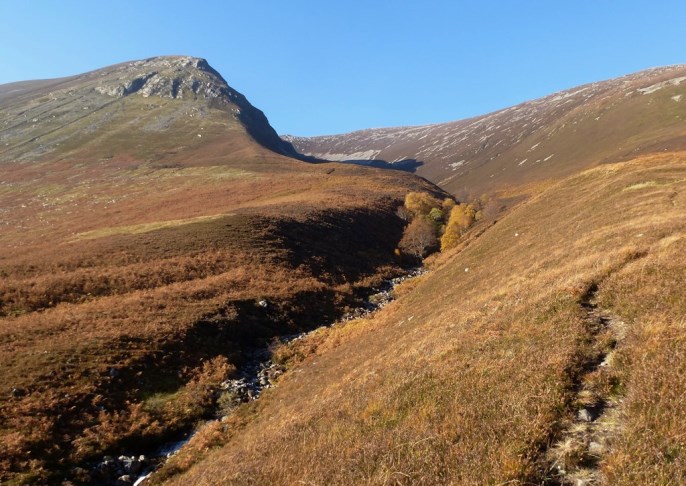 The path just after leaving the road 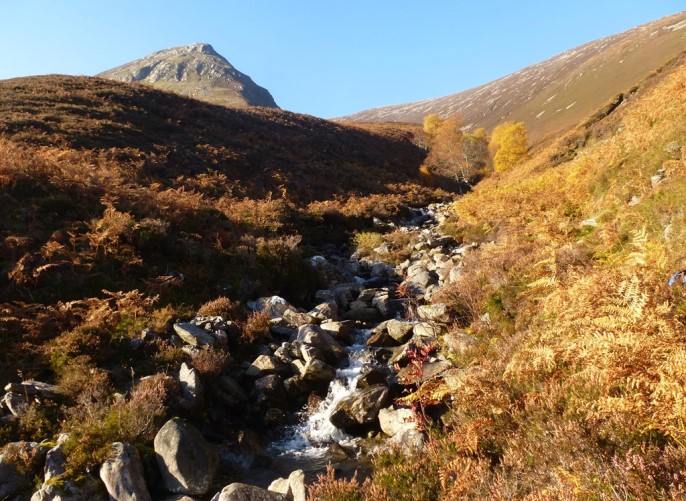 Crossing the burn before ascending the ridge 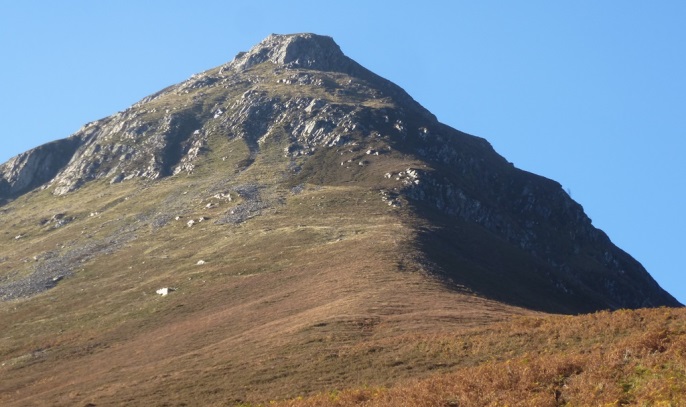 Looking up the ridge to the craggy steepening

As the gradient steepened on the concave slope, the exposure began creeping into my consciousness. My earlier confidence in switching to the tougher route had proven hollow. I’d been away from mountain exposure for too long, and I was soon clutching onto heather and turf to pull myself up, which only serves to sharpen the angle and increase the sensation of steepness. A rocky step that might’ve given a good scramble was frankly bottled, leaving me to flank on the south side: an uglier alternative of loose of gravel and turf, still steep enough to unnerve in the mood I was in. Looking back into Glen Roy, my car a white dot beside the burn The steepening at closer quarters

It was a relief to reach the rim of the corrie, where the walk around the deep bowl to the summit cairn could be enjoyed, with all the climbing now largely done. The view southwards was dominated by the Nevis range and Grey Corries, although the distinct cone of Lawers’ An Stuc, 36 miles away, caught the eye beyond the shoulder of Rannoch's Sgor Gaibhre. To the north, the twin giants of Mam Sodhail and Carn Eige stood out distinctively amidst the sea of peaks. 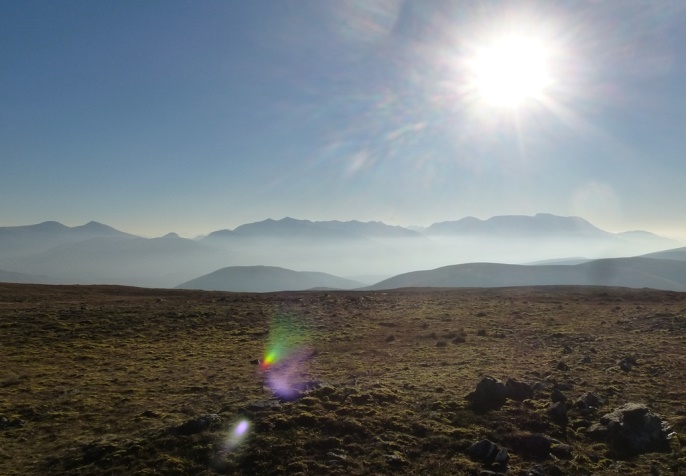 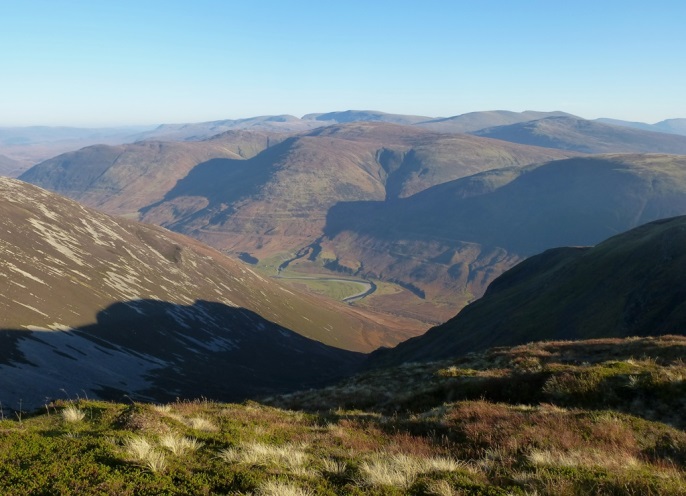 Glen Roy, with the Munros near Creag Meagaidh beyond one of the glen's three "Carn Dearg" Corbetts 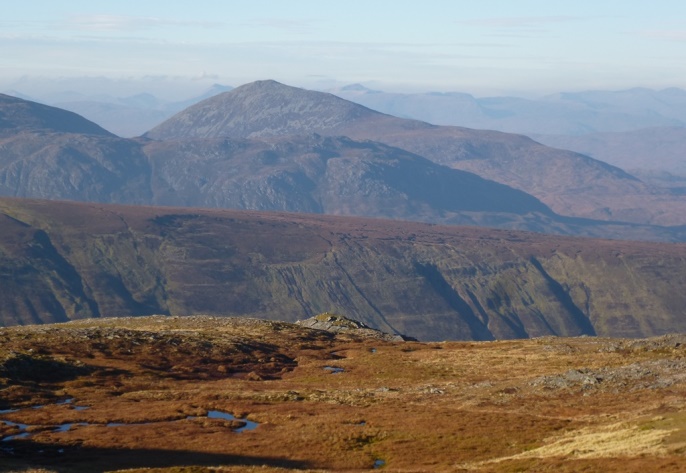 Ben Tee - nearly my aim for the day 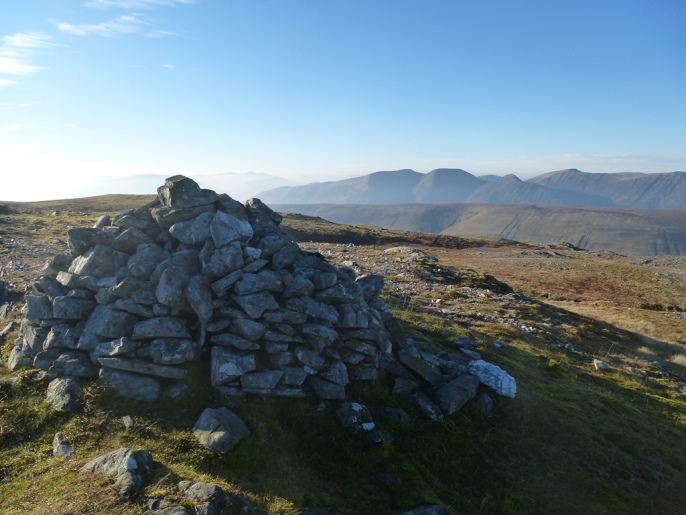 The summit cairn, with the Loch Lochy Munros behind

The descent was knee-jarring, despite being on the easier side of the corrie. The Ordnance Survey are clearly being a little tongue-in-cheek marking the Parallel "roads" with their symbol for a track, the ones I crossed being a section of level ground traversing the hillside, but heather covered and rough none the less. The ground was steep, but not enough to make it too awkward, and I reached the base of the glen in a bone-jarring 30 minutes. I caught my breath beside the bridge, chatting briefly to a couple who pulled over to say they’d enjoyed the fine day on the opposing hill: one of the glen's three "Carn Dearg" Corbetts that I'd hopefully return to one day. 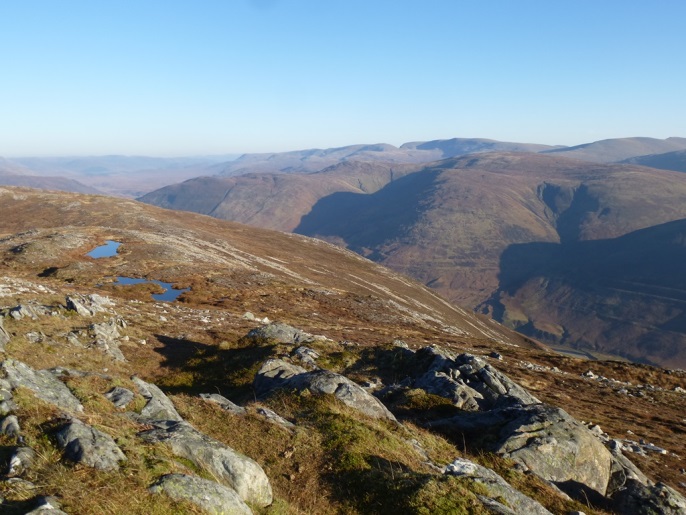 The beginning of the descent route into Glen Roy 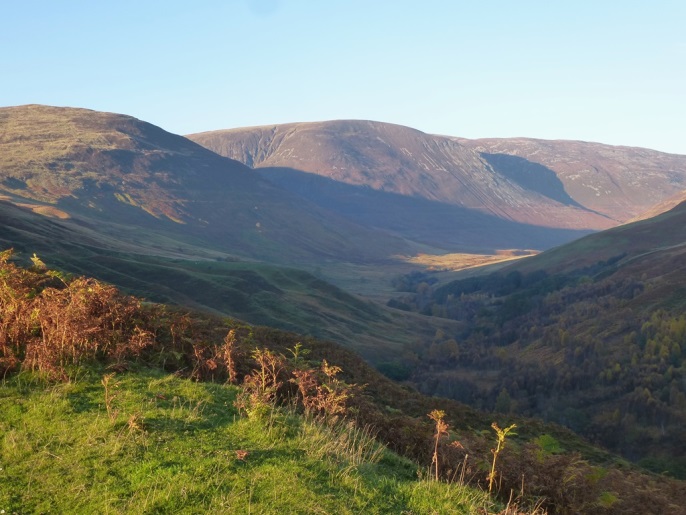 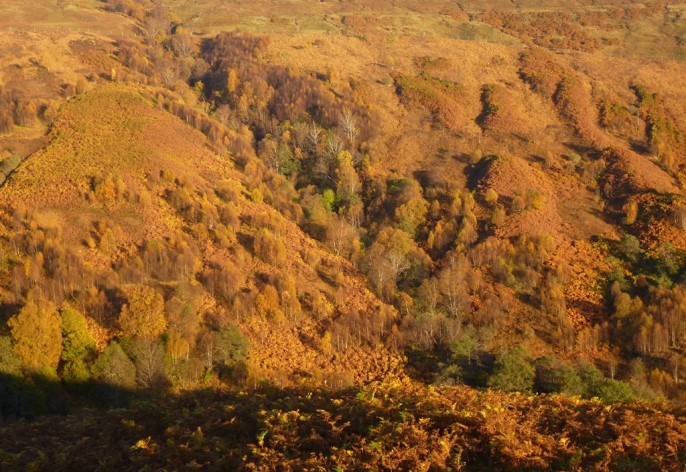 Final blast of autumn colours from the marvellous Glen Roy

The drive back down Glen Roy was invigorating in itself, and I finally picked up a bit of late lunch with a BLT and sausage roll from the cafe besides the Well of the Seven Heads monument. I'd enjoy a good meal that evening at the Bothy Bar in Fort Augustus, but not before the camera was given a final work-out thanks to a stunning Highland sunset from Loch Tarff... 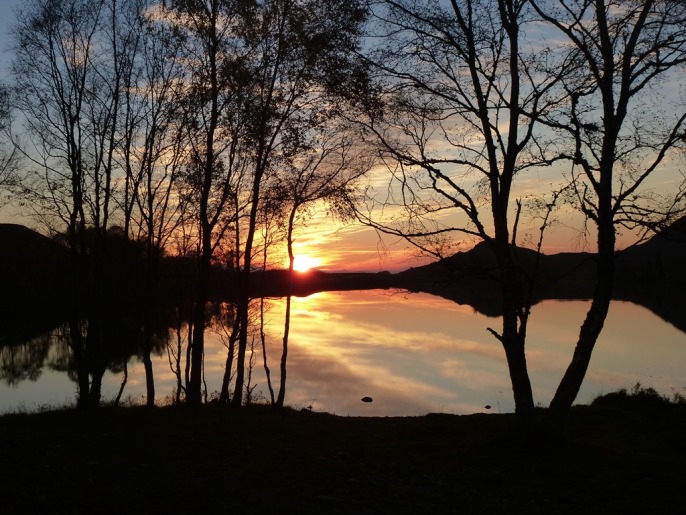 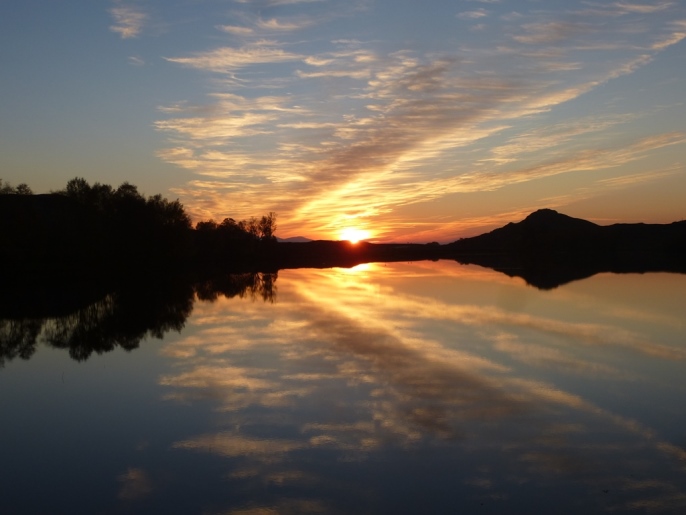 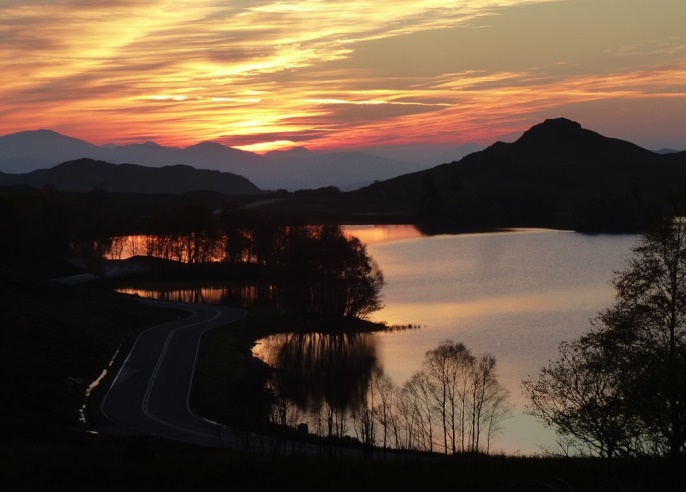 Beautiful, what a fantastic November day that was. Loch Laggan looking like a mill pond, unbelievable! And those autumn colours! And that sunset! The Corbett just seems to be a bonus.

Superb! I really fancy a trip into Glen Roy over the Xmas period (will be my first venture there too) but somehow I think the brilliant colours may be a goner by then!

Graeme D wrote:Superb! I really fancy a trip into Glen Roy over the Xmas period (will be my first venture there too) but somehow I think the brilliant colours may be a goner by then!

Was delighted with Glen Roy, would have liked more time to explore it but I'll be back. Yes, don't think many leaves will be left after this storm that's rolling in!

Silverhill wrote:Beautiful, what a fantastic November day that was. Loch Laggan looking like a mill pond, unbelievable! And those autumn colours! And that sunset! The Corbett just seems to be a bonus.

I could have spent all day stopping on the journey over taking pictures etc, difficult to balance with actually reaching your destination! Generally find you don't regret it if you stop for a picture, but might do if you let a good opportunity go!

Glen Roy is one of our favourites. A little too tranquil though, I find it hard to motivate myself to do anything here apart from enjoy the ambience, which is superb

We are overdue a visit..
I especially like the bit of road that is so steep and bendy that you cant see where you are going for your own bonnet

Have read about the history surrounding the Parallel Roads, very interesting on their own regardless of the hills

Lovely pictures and that sunset