An Socach in a cold wind

An Socach in a cold wind


It was the half term holiday in Yorkshire and time to visit family in Aboyne. This time last year we planned the quartet of Glas Tulaichan, Carn an Righ, Beinn Iutharn Mor and An Socach with a camp by Loch nan Eun. We had a fine adventure with some night navigation and trying out our new tent, but there was stalking going on on Glas Tulaichan so we had to leave it out, and the second day was foggy so we missed out An Socach in favour of a warm dry lunch.
So this year perhaps we could tick off the two we missed. However, having a camping expedition with Gold DofE planned as soon as we got home (CWH as participant, me and Rudolph as helpers) we did not feel we could be bothered to crack out the tent on the way to Aboyne and opted to pick what looked like the best weather day of the week for a day-walk.
Monday turned out to be the day with the best forecast and we opted for An Socach via Baddoch Burn, the standard WH route, just for a change. The BBC promised it would be a fairly mild day and the rain would probably stay off, which sounded about as good as we could expect.
We set off from Aboyne as early as we could be bothered and got to the parking place at Baddoch around ten o'clock.
The old house at Baddoch looks like it is maintained but not lived in, what a stunning spot, but there are no windows on the south side of the house which indicates to me that there is likely a keen wind whistling down this glen a lot of the time. I bet it's a cold house to live in. the track up the glen. You walk up here for a few km till you cross a tributary by a ford, then strike off right up the hill. The path forks left shortly after this and makes a gentle enough ascent.

We followed the WH route which led us quite gently up onto the ridge. There was a Southerly wind but it felt like it must have come from Siberia and twizzled round - it was biting!
We stopped at about 530m for a snack and sat on some tiny toadstools. There were loads of toadstools everywhere, hard to miss them. 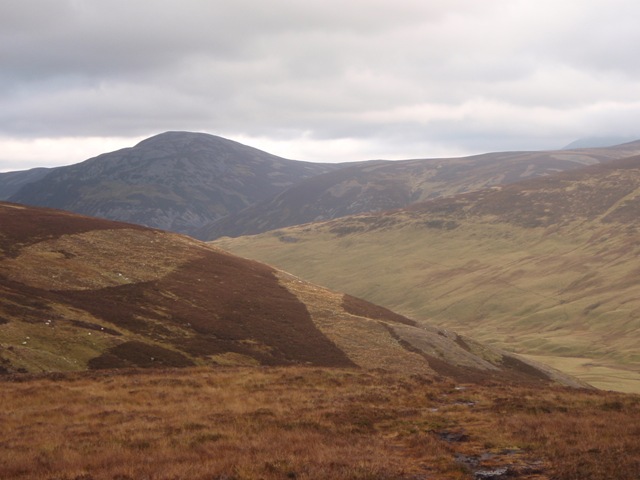 Looking back down the glen towards Craig nan Gabhar Looking back towards the cairn and Creag nan Gabhar Death and Destruction. there was a neat pile of "insides" on the path close to here but I was not allowed to photograph them.

The cloud base was hovering somewhere near the summits and this with some shafts of sunlight getting through on other hills (not ours) made for some stunning hazy views. On the ridge, lovely light 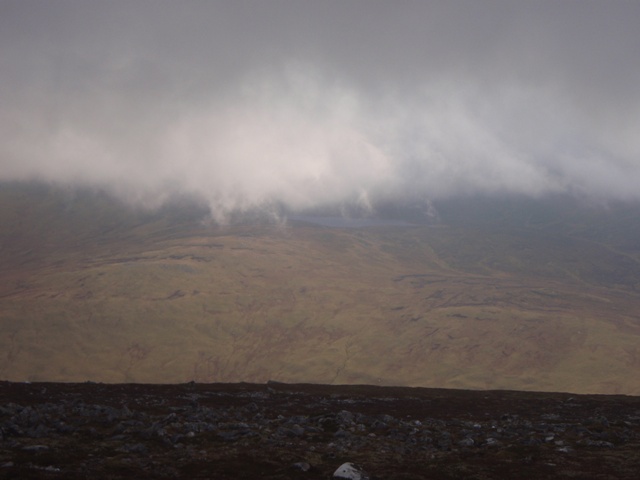 Loch Vrotachan visible under the clouds Reaching the top we met two gentleman in the summit shelter who kindly made room for us until they finished their lunch and headed back down. We dismally failed to brew a cup of tea as the gas was far too cold and would not creep out of the almost empty cylinder. Rudolph tucked the cylinder inside his coat and we sat inside our bothy bag and finished our sandwiches. There was no view inside or outside the bothy bag so we headed off down by the way we had come, getting back to the car just as it was beginning to get dusk. tiny flowers near the summit - amazing Looking over to the White Mounth the dark streak above the cloud is Bheinn a'Bhuird, the sunlight on the hill below the cloud. Amazing Careful, it might turn into a nice day!(it clouded over again shortly afterwards!)

On the way down we stopped at the cairn and managed to get enough gas out of the cylinder to make a hot drink. It almost came out nice and the wind dropped, but it soon started blowing again. Rudolph had got the gas nice and warm inside his jacket and we cuddled the cylinder with our hands to keep it warm.
no happy cups picture as we were now in a bit of a hurry to get our tea drunk and get going. a plinth made of peat for the grouse to feed. coming back down. some nice moraines visible on the valley floor The back of the house at Baddoch

It's not one of the most exciting days on the hill I've had but some lovely views nonetheless and another blue balloon for the three of us. People staying at the farmhouse when I passed here last year,very nice they were spent a good 20 min talking to them on my way back

Its a bonny walk along the ridge to Morrone, with some interesting wee bivvy's and such like along the way, but it does leave a problem of how to get back to the car

Lovely pictures of the streaks of sunlight on the other hills!

Thanks for the explanation of the plinth regarding feeding the grouse! Had seen those before and had wondered what they were for, mystery solved!