With a good forecast we loaded our bikes into the car for this trip in the eastern Cairngorms. It's a longish day and using the bikes cuts out around 16km of land rover track walking.

Ben_Avon_Sept_2015.gpx Open full screen  NB: Walkhighlands is not responsible for the accuracy of gpx files in users posts
The route from the start point at Keiloch is easy to cycle for the first section which runs behind (N of) Invercauld House; it can be a little confusing finding the correct point to take the right-hand track leading up Gleann an-Slugain (sometimes called the Fairy Glen) as it's not that well signed at the turn-off point. Given that it was misty the whole way from Kerloch until end point of our cycling it was just as well I knew the correct track to take. After the right turn cycling becomes more difficult as track steadily rises and there are a few boulder-covered burns to cross. The last part has become steadily more overgrown and it's hard in places not to catch the heather with the pedals. When cycling on this track we met several small groups of girls on Duke of Edinburgh Award treks walking with large packs in the opposite direction - they reported that camping conditions had been rendered horrendous by swarms of fierce midges!

It's obvious where the bikes have to be left as the old vehicular track ends at point where glen narrows and steepens. There are some nice camping spots hereabouts....although it would have been anything but pleasant camping here on this occasion as we were about to find out. Leaving the bikes involved transferring heavier items back to the rucksacks from the panniers and chaining the bikes together; despite managing to accomplish this task in about 3 minutes we were descended upon by literally millions of midges. Fortunately we'd remembered to pack that most important item of equipment for late summer!

Leaving the bikes behind a short climb took us out of the mist but not away from the midges hence more or less had to keep walking when taking a quick photo.

Ruin near top of Gleann an-Slugain

Some quick walking took us to point where route turned north on track leading to The Sneck and combination of sun and a breeze dispersed the midges. Lips were swollen for a short while, rather like having had an injection at the dentist, due to all the bites. Slopes of Beinn a'Bhuird to left, Ben Avon to right. 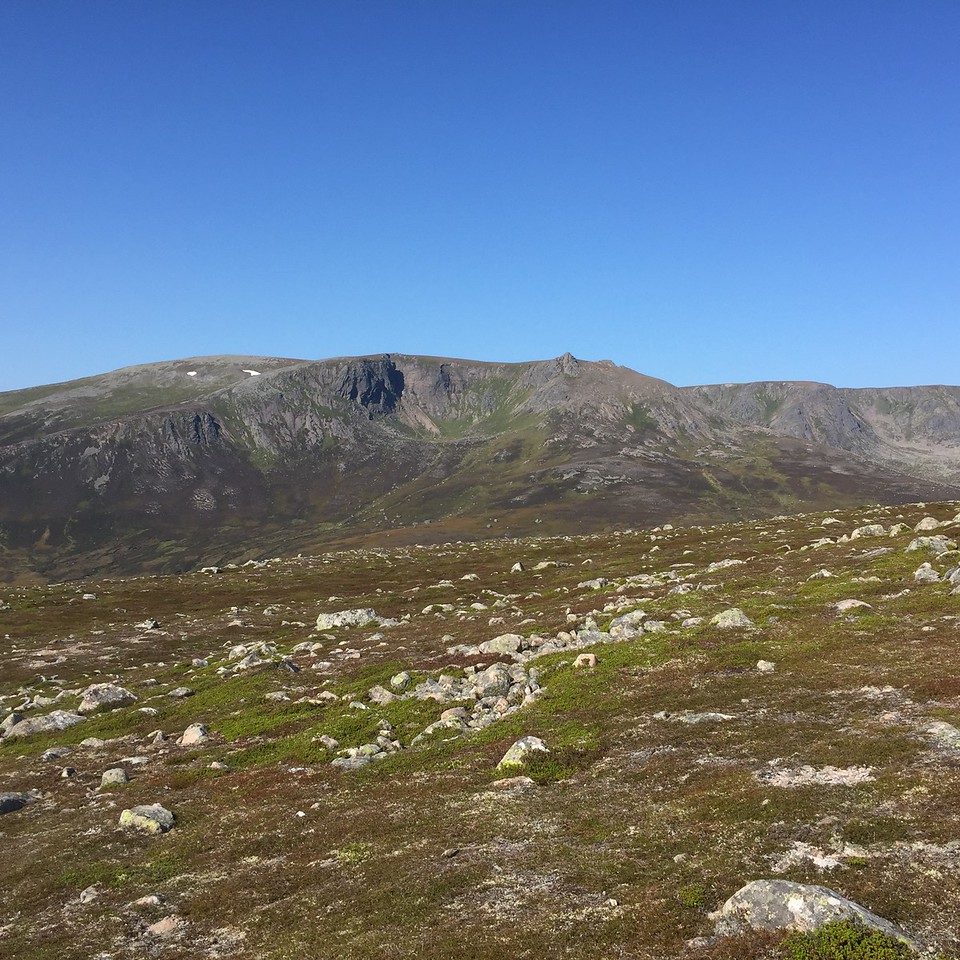 Tors on Ben Avon, large herd of deer to right near burn.

Encountered mountain hare just a few metres away which obliged by staying put while I retrieved the camera.

Looking east from summit towards Morvern

Descending the summit tor which involves a little scrambling.

Looking at our route west over the Ben Avon plateau and on to Beinn a'Bhuird (with drop of around 200m to The Sneck in between).

The Sneck and Garbh Choire.

View back to Ben Avon.

Featurless North Top of Beinn a'Bhuird which I've found challenging to locate in clag / whiteout (and there was no option of GPS during my early visits).

Coire Nan Clach and, in background, Morvern to left, Mount Keen to right.

Looking back towards The Sneck after descending plateau from just north of the South Top, down an easy ridge apart from short sections of very large boulders. 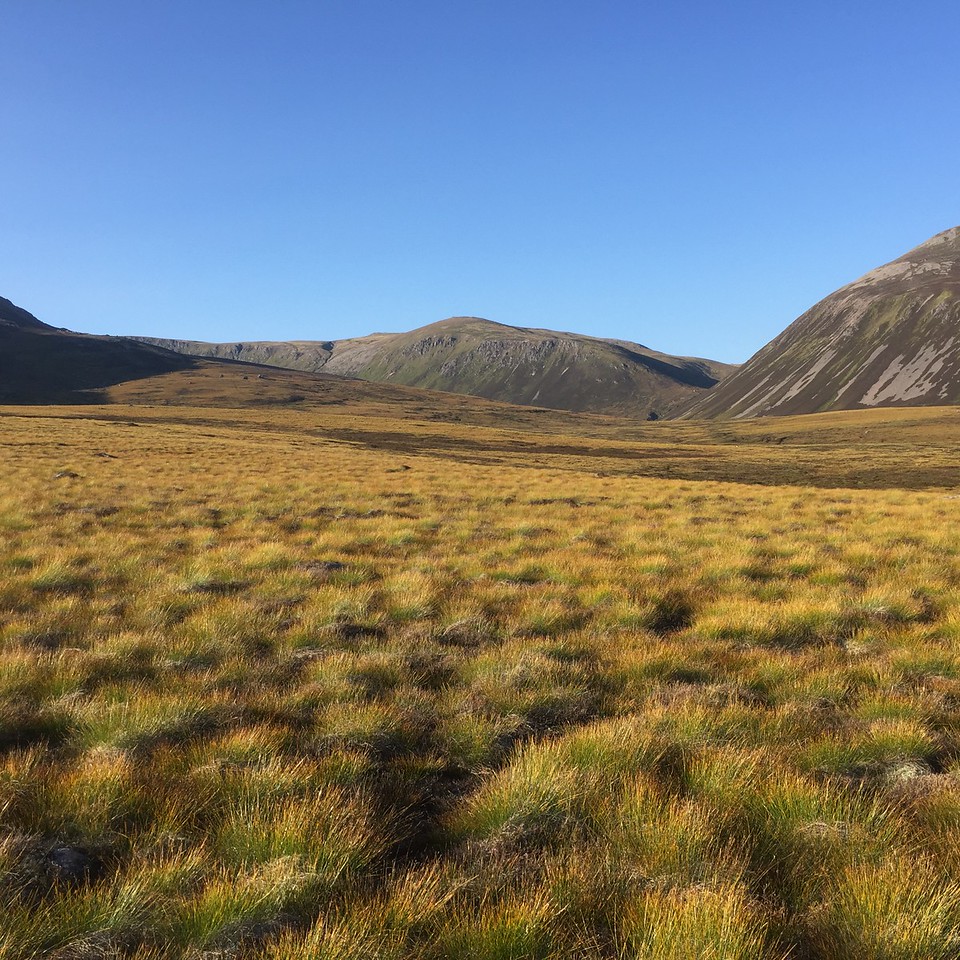 Looking north towards The Sneck.

Descent into Gleann an-Slugain...and we were very soon to find out that the midges had not gone away!

Once back at the bikes a very quick getaway was called for so that the breeze generated by the ride down dispersed the dreaded beasts. Here are trip stats with max speed reflecting the descent on our bikes. Another brilliant day when we had most of the mountains to ourselves as there were few others around. Apart from Gleann an-Slugain there were no midges for which it appeared they attempted to compensate by the sheer scale of their attacks lower down! We've always expected such swarms further west but we have the feeling that midge presence in the Cairngorms has increased in recent years. 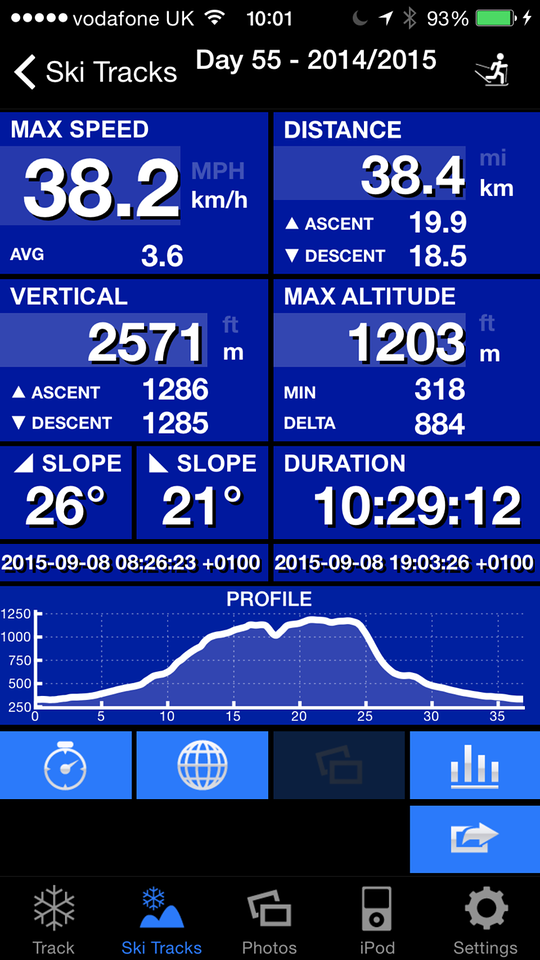 Great pics, shame about the midgies!

Great photos! But are you sure it was November 8th?

Weather in Inverness was pretty bad that day, should've gone to the Cairngorms!

brocoli, date of trip was Sept 08 which should show at top of report; it also matches date on track log (last image). I made a number of trips in past few monthsand have been posting a few trip reports now that evenings are dark and I've time to sort out the backlog of photos.

I'm also editing original post today as have found that the iPhone was, in fact, creating a track log which will make for a smoother and more accurate route map than my original track extracted from the sequence of photos.

What a brilliant day you had there, superb photos. Swollen lips, when I read that I thought it was due to the repellent as that Jungle formula stuff gives the effect of numbness, as you said like the dentist

The days before GPS and mobiles for that matter, I wish

Use to leave my mobile at home when I went out much to the bemusement of my pals...why they asked...well I'm out I said

Great walk this and you had fantastic visibility.

One of my favourite walks! I did these two last year and due to a broken camera couldn’t take any pictures. Yours bring back happy memories.

You do pick good days for your trips!

Silverhill, living fairly locally and no longer working means that we generally wait for the good days. Having said that I've had numerous bad days, often with a group where dates have to be fixed in advance. If it's really poor I take few, if any, pics hence the trip reports I've made so far are slanted towards the best days!