Culter Fell in the Wake of Storm Abigail

Culter Fell in the Wake of Storm Abigail


We had planned to do Sguith Chuil today, but in light of the abysmal weather forecast thanks to Storm Abigail (high winds with wind chill feeling like -16, excessive rain, sleet, hail and possibly lightening), instead of staying at home, we decided to head South in the hope that the stormy weather would be less severe.

As we started the walk, it wasn't raining and the wind was not too bad. It was fairly cold, but nothing you wouldn't expect for November in Scotland. There was a clear track leading off the main road, which we followed passing the grouse butts. As we got higher, the wind got stronger with some strong gusts, but I wouldn't expect it to be more than 25 to 30mph at most. There were a few light showers than passed, but in general, visibility was good. We passed the minor cairn and continued to the summit of Culter Fell, marked with a trig point. There was quite a lot of icy snow on the ground as we got near the top. We got the group shelter out and had a snack, good being out of the cold and wind while we were stationary.

As we started off again, there were a few moments when the sun broke through, although the wind chill here was pretty bad. We started down toward the minor hill of Moss Law and it got significantly warmer on the decent, although also very boggy underfoot. We got to Holm Nick, where we met up with the land rover track to start our return journey. Due to the weather, we opted to cut the walk short, rather than doing the whole circuit. This was just as well, as just after we started down the land rover track a blizzard set in! Two of us had brought googles, which came in handy as the frozen rain stung our faces. The other two made use of their map cases as shields! Thankfully, at this stage we were on a track, so it was easy to navigate back to the start.

Back at the car, the thermometer said it was 2 degrees -I expect it was a bit lower with the wind chill. Before returning to Stirling, we stopped off at the Mill Inn in Coulter, for a hot drink and a bite to eat.

All things considered, it was a great day out!

P.S I don't know why the photos are in reverse order -sorry Caught in a blizzard. Still having fun! At Holm Nick where we started our return leg instead of continuing the full circuit. Starting the decent from Culter Fell to Moss Law Views south from the summit of Culter Fell Group selfie at the top At the trig point marking the top of Culter Fell

Views towards the West -surprisingly clear at the cairn half way up Culter Fell 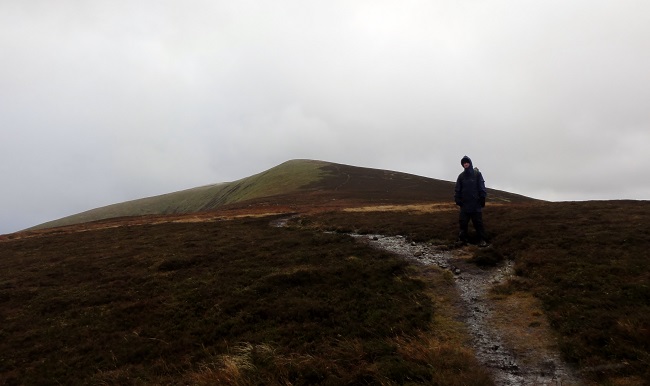 Re: Culter Fell in the Wake of Storm Abigail