A driech, foggy November Sunday morning, but I needed some exercise, and the forecast was for worsening weather, so I headed over some very wet roads, past full rivers to Yetts o'Muckhart, and parked just off the B934 Dunning Road at the forest track end at NO018040. With low cloud, map left in the car, no compass, and orienteering shoes on, this would be a good map memory exercise

So I ran up the forest track, ignoring the direct waymarked route that climbed steeply SE, because I'd spotted a forest ride that left the track higher up, heading S up the ridge, and figured it would be a gentler climb. I saw the ride, but ran past it thinking I hadn't gone far enough, but realised a couple of hundred metres afterwards that it was the one I wanted, so doubled back. This ride was indeed a fairly gentle climb, short grass and easy going for the most part, and soon met the more direct route just below the treeline.

From there, there was a faint path out into the open, across the fence and soon to the top of Lendrick Hill. I visited the cairn and the trig point—the mist had cleared just enough that you could see one from the other, but no views of windmills, power stations, oil refineries, bridges or any other of the usual Central Scotland landmarks you'd expect. 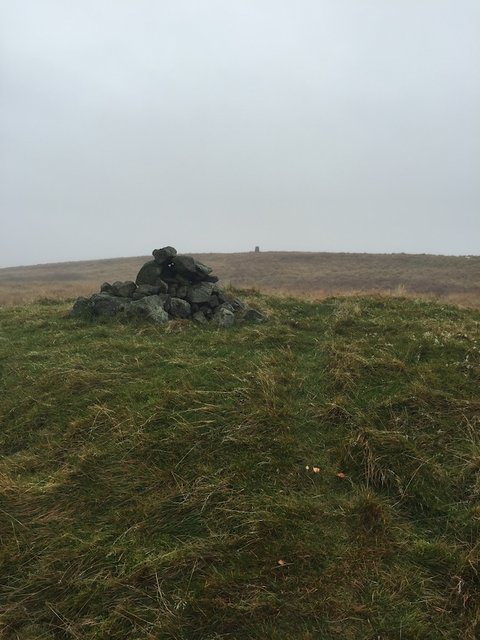 The summit cairn and trig point are not talking to each other!

I didn't hang about, so ran back down the direct way, and it was just as slippy as the other walk reports indicated it would be! Even with studs on, I had to take care not to fall on my backside. Where the direct hill path leaves the track

But even so, it was a quick descent back to the track and down to the car, and thankfully the rain that was forecast never materialised beyond gentle drizzle. The only previous Ochil hill I'd done was Dumyat, so I'll look forward to coming back to explore these hills when it's sunnier!