This trip was made over 5 years ago, in March 2010, but as the conditions were so exceptional and I've only just stated posting trips on this forum I feel it will be of interest. In winter of 2009/10 the Cairngorms had received a number of heavy falls of snow which, unusually, had tended to occur with little wind thus by March 2010 snow was lying several metres deep over many plateau areas. Making this trip on foot i.e. without snowshoes or skis would have been exhausting if not impossible hence we used touring skis (and I've checked with editor to confirm ok to post in Munros section).
No GPS enabled phone on this trip; stats based on plotting route on map and are approximations.

Glenshee-invercauld_mar_2010.gpx Open full screen  NB: Walkhighlands is not responsible for the accuracy of gpx files in users posts
The route we planned to take (which our local vet had done on skis a couple of weeks earlier) was to start at the sweeping bend of the A93 road some 2km north of the Cairnwell ski area and finish at the Invercauld Bridge approx 5km east of Braemar taking in 4 Munros en route including Lochnagar. With no bus service south of Braemar it's ususal to position 2 cars or position a bike so as to avoid the risk of a 17km road walk at the end of the day to retrieve the vehicle. I decided against taking a bike as didn't particularly relish the prospect of cycling for well over an hour uphill in the dark with roads very liable to be snowy / icy (temperatures were around -12c at night). With no one else available at short notice to accompany my wife and I we were restricted to a single vehicle but at least there was a regular bus to Aberdeen from Invercauld which would avoid her having to make a long road walk or wait hours in the cold. In any event conditions were so exceptional there was effectively a 'one off' chance to make this trip and we decided to simply 'go for it' and worry about retrieving the vehicle when we reached Invercauld.

With such deep snow cover extra equipment is really required and we carried probes, shovels and wore avalanche transceivers. I can't recall if I also carried a windsack but I normally do in winter conditions as it provides an instant shelter whereas digging a snow hole requires a suitable site with deep snow which is still soft enough to dig and it can take around 1 hour of digging before one can start to obtain initial basic shelter.

As this trip is several years back a selection of photos are posted below (if anyone wants to see more I can send link to the hosting site upon request).

Even near start of trip at c500m snow cover is extensive and there are virtually no boot tracks, just ski tracks. Slopes of Carn an Tuirc to left. 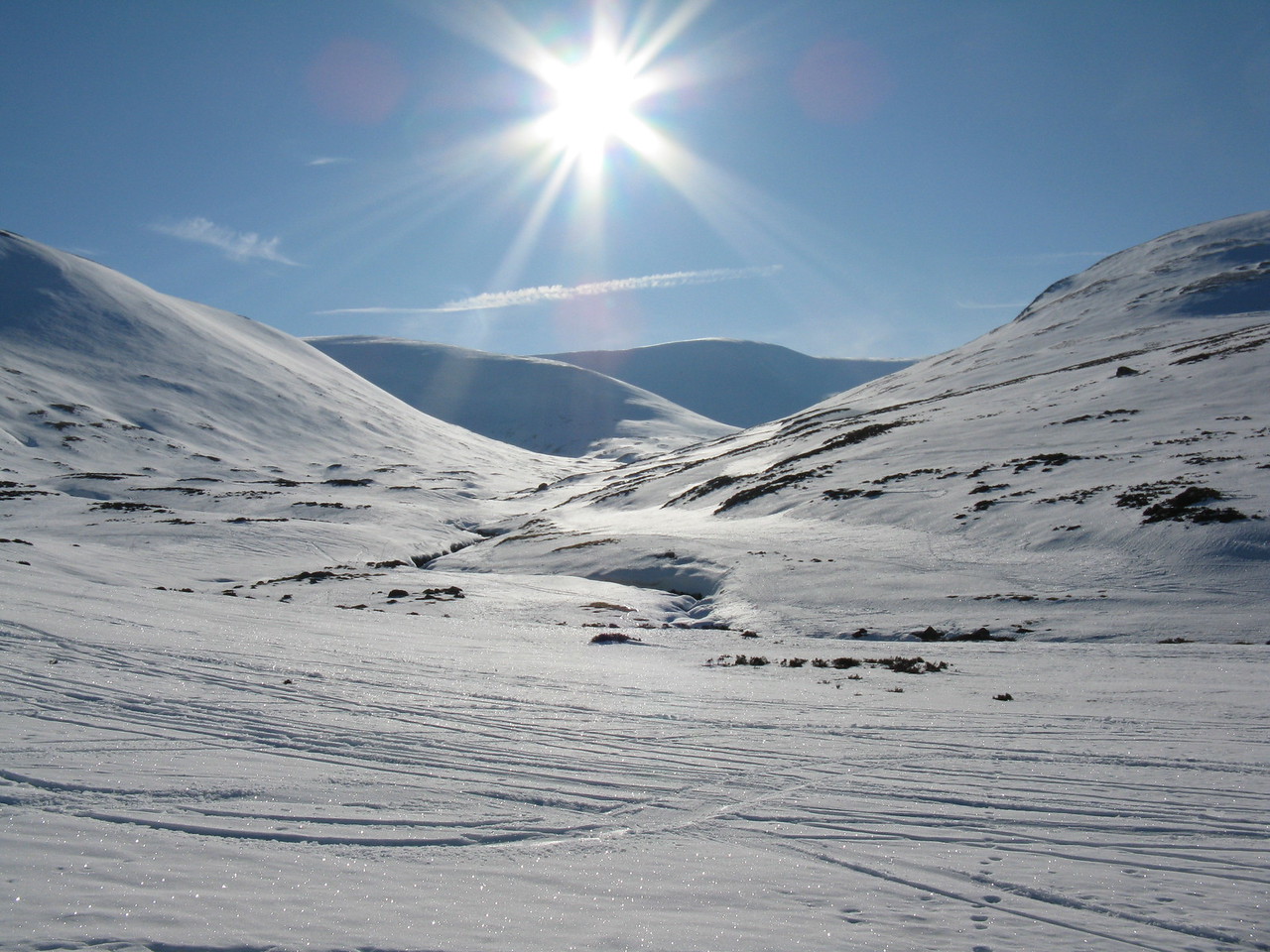 Looking NE from near summit of Carn an Tuirc showing just how extensive the snow cover is; summit of Lochnagar just visible in far distance just to left of centre of photo. 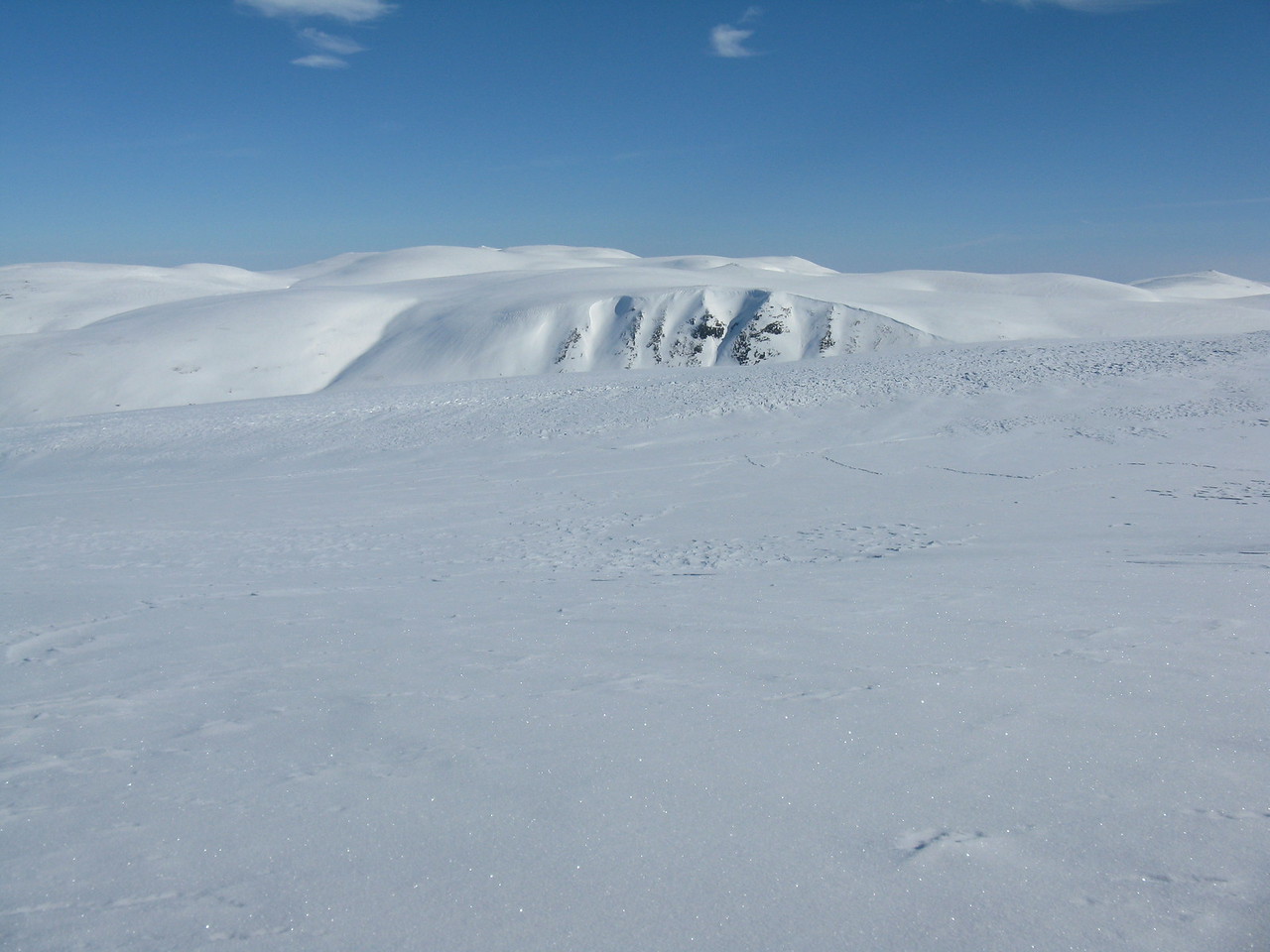 Heading across plateau to Tolmount; easy angled slopes of Cairn of Claise (which we skirted) to right.

Looking back to Cairn of Claise, centre and Carn an Tuirc, right. 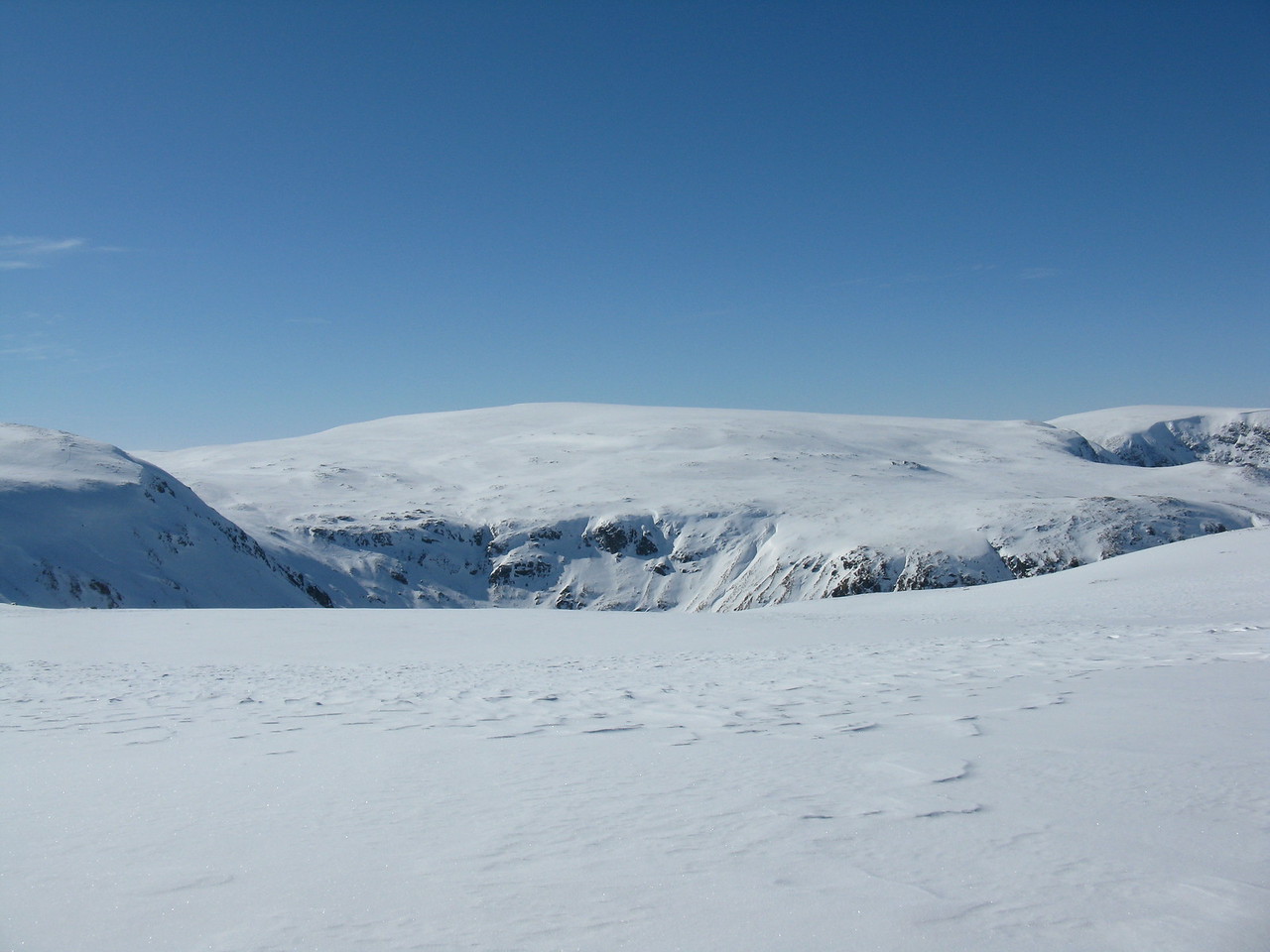 As there was still around 15km to go and we had no recent experience as to the descent conditions from Lochnagar to Invercauld we opted to miss out Carn an t-Sagairt Mor via its SE slopes. Although there was relatively little wind temperature was still quite low at 1000m with such extensive snow cover; we found a nice spot for lunch in an easy angled gully, an upper spur of Allt an Dubh-Loch prior to putting on our climbing skins for the ascent of Carn a'Choire Bhoidheach.

Here's view of Lochnagar from bealach after descending Carn a'Choire Bhoidheach; our proposed descent route for Invercauld is the gully running from top right to bottom left. 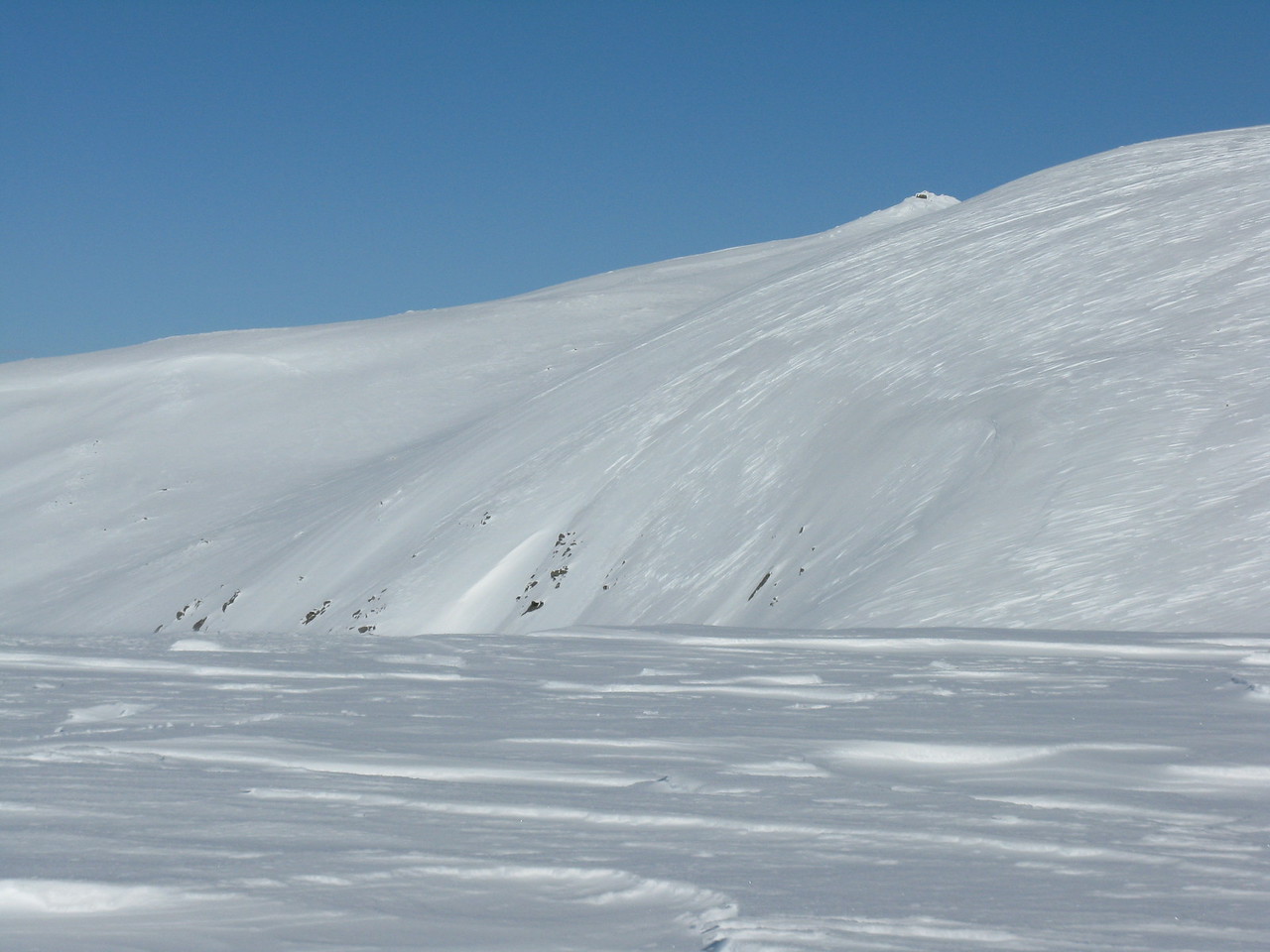 Looking SE, summit viewfinder of Lochnagar almost buried; cover was such that we could ski to top of summit tor.

Looking back at the initial (steeper) part of our descent route down to Sandy Loch; although quite steep the descent of the upper gully was quick and quite easy as slope aspect faced the afternoon sun thus top 2cm was fairly soft but on a hard base. Ideal snow conditions for our Alpine touring skis (although I wouldn't have fancied it using our Nordic skis).

Heading down to Sandy Loch 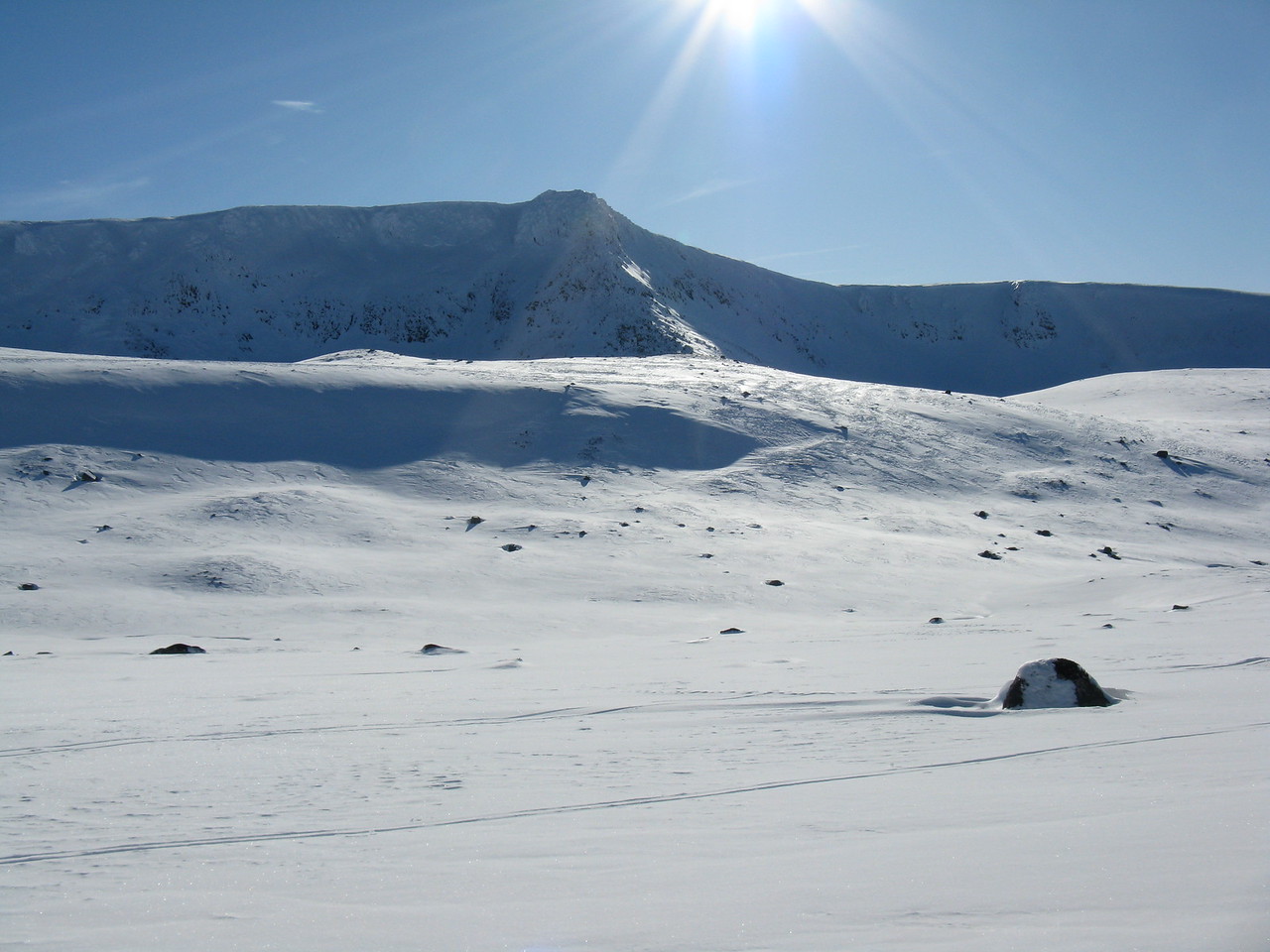 Looking back to Lochnagar (left) and Carn a'Choire Bhoidheach from vicinity of Sandy Loch (no sign of Loch as frozen over and under deep snow cover). 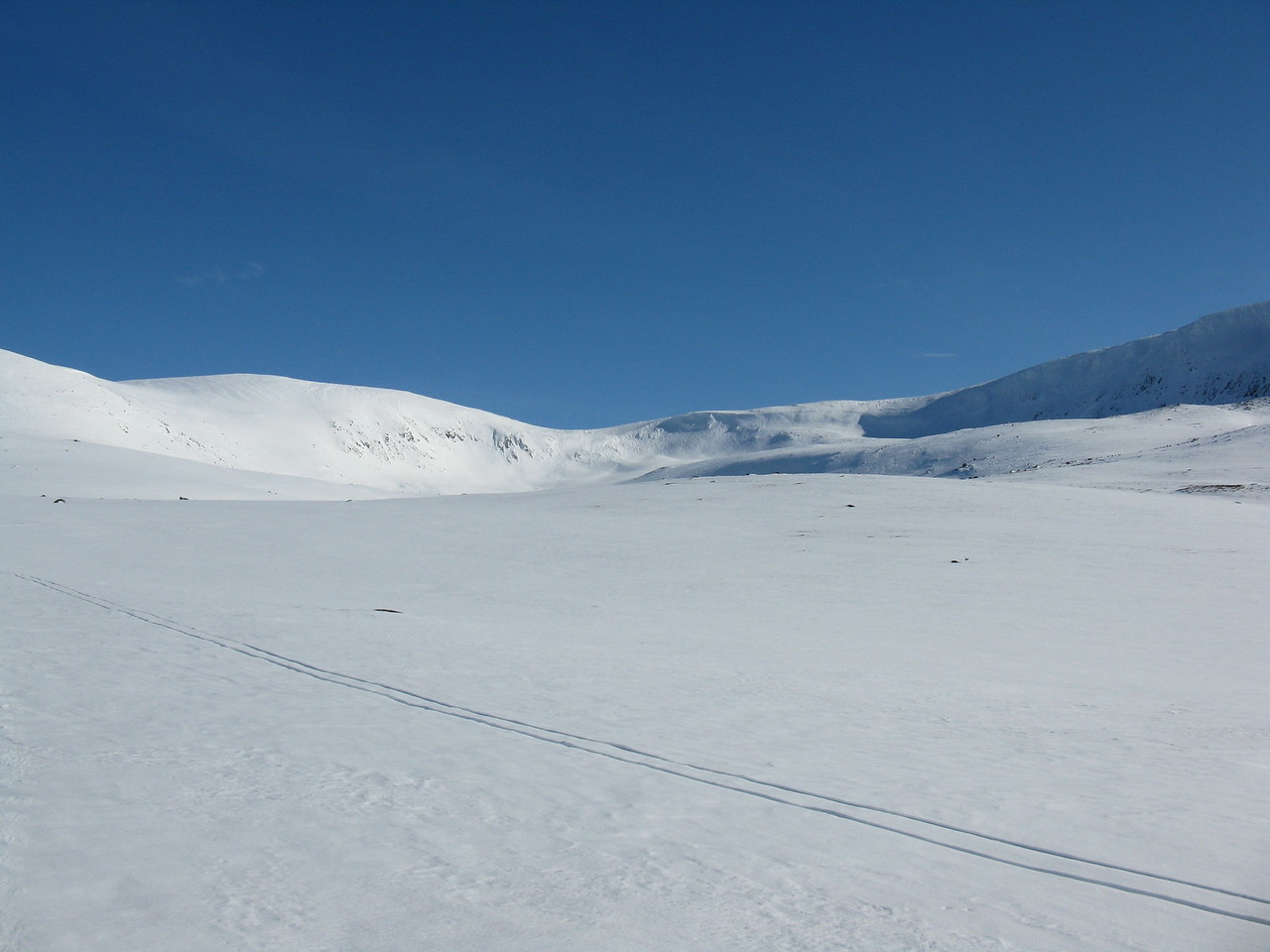 The descent from Sandy Loch to Invercauld was easy on our touring skis and a lot quicker than walking; snow cover at edge of trees was such that we could ski over the deer fence! We only needed to carry our skis for the last 300m where track had been ploughed to expose gravel. We had timed our arrival at Invercauld such that my wife did not have to wait long for the Aberdeen bus. I placed our 2 sets of skis and some other heavier items under a bush beside the land rover track just short of the A93 so as to minimise the weight in case I ended up walking the whole 17km back to the car. Fortunately I was in luck and after just 2km of road walking towards Braemar a water engineer heading SE via Glen Isla had been diverted from his ususal route due to snow related closures and gave me a lift right back to the car (saved another 2-1/2hrs of road walking which would have been mostly in the dark). The drive home was uneventful as roads were relatively deserted; our ski equipment was retrieved from the track at Invercauld.

Although we saw a couple of figures in the distance we did not meet a sole all day, probably due to a combination of it being a weekday and also the snow cover was such that tackling these summits on foot would probably not have been an option. A really great and memorable tour and with ski workers at Glenshee reporting that such conditions had not occurred for 45 years it's not a route that we'd often expect to repeat, at least not on skis.

Incredible stuff, you could have told me it was a walk in the Arctic and I'd have believed you from some of those pictures

Great report. I've checked back and did a lot of ski touring that winter myself with the highlight being an April linkup of Macdui & Brairiach.

Were you on alpine touring kit?

prog99, we used Alpine touring skis with Fritschi bindings. They were excellent for the steeper sections - ascent of Carn an Tuirc, descent from Lochnagar to Sandy Loch and also for some of the track through the forest leading down to the old bridge at Invercauld where some had attempted to walk leaving great ruts in the track. It's just so much easier to handle sections needing tight turns with heavier equipment and fixed bindings. Clearly Nordics would have been a big advantage for the long plateau section over Tolmount and on to Lochnagar but it's a case of making some compromises and using whatever equipment is best for the route as a whole. In our case we have such an option as we have both Nordic and Alpine Touring skis.

More recently [Edit - March 31, 2013] we were able to repeat part of this route, ascent of Lochnagar from Invercauld via Carn a'Choire Bhoidheach returning via the same route. In this case we used Nordic skis hence our returning via our easier ascent route as Nordic's really are not up to the direct descent from Lochnagar to Sandy Loch. Not least on that more recent trip the avalanche risk was higher hence it was prudent to avoid the steeper gully leading to Sandy Loch. The track through the forest was more difficult on Nordic's and I recall taking a tumble at one point and also carrying the skis for a short section; by contrast on the earlier trip with the heavier skis I had no such issues.

Wow, what a tour! I’ve done some cross-country skiing in the past (great fun), but that’s just a walk in the park compared to this. Amazing!