our_route.gpx Open full screen  NB: Walkhighlands is not responsible for the accuracy of gpx files in users posts
Week 3 of our assault on the smaller hills closer to home and the weather was testing our resolve this weekend. Options were for Steel's Knowe or Innerdouny Hill and, rather than head out very early as in the previous two weeks, we opted for a lie-in and to set-off in the afternoon as it looked like the least cr@p forecast. With it being a claggy, drizzly day, and the subsided winds set to return later, we opted for Steel's Knowe on the basis that we'd keep Innerdouny for a, hopefully, nicer day.

Admirably, Elizabeth was here again, despite the weather and Ferris, our Border Terrier, glad of a longer walk in a week of gales and rain that had curbed some of his walks.

Ben Thrush on setting off, quite pleasant overhead at this point... 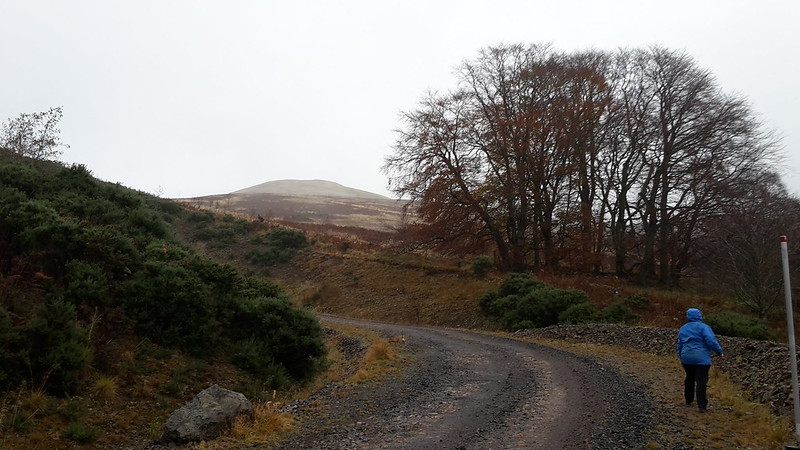 So, not a lot to say about this one but, parked up at the end of the Green Knowe Windfarm track (where two cars were already parked), through the person gate, follow the initially windy and moderately steep track, before it straightens out and continues to climb towards the steel giants looming through the mist. A hill-runner descended past us and we could see two people with two large dogs farther up the track (likely culprits of the massive pile in the middle of the track a bit back). Only a couple of the turbines were turning at this point and those that were, were turning very slowly. The closer we got to the high point of the track, we could hear a number of noises from the turbines clunking, banging, and whining like quiet sirens. The track levels out at the last turbine (No.18) and we're looking for #5 or #6 for the route over to Steel's Knowe so, there's a bit to go from this point. It's track all the way though, mostly flat with the occasional undulation, and before too long we reached turbine no.5 (having completely missed #6 in the clag which had now settled around us). My recollection from the map was that the trig point wasn't far from here but, visibility was such that we could not see it. I decided to jog over in the general direction and it quickly emerged out of the murk, so we carried on over to the trig and, after a quick photo, headed back to #5. 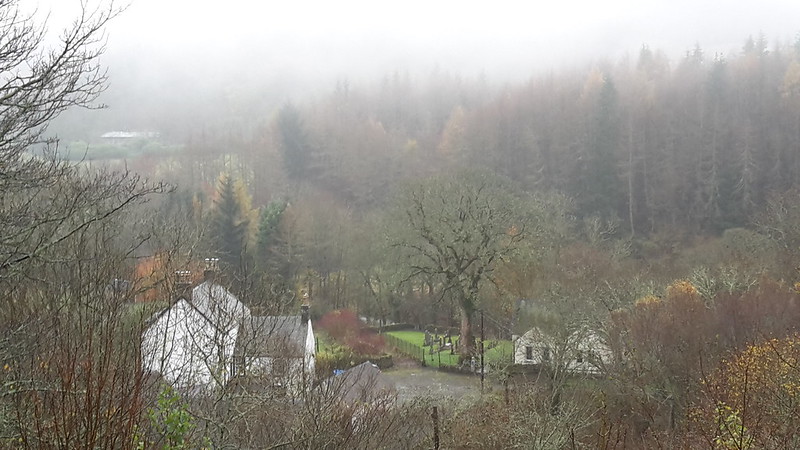 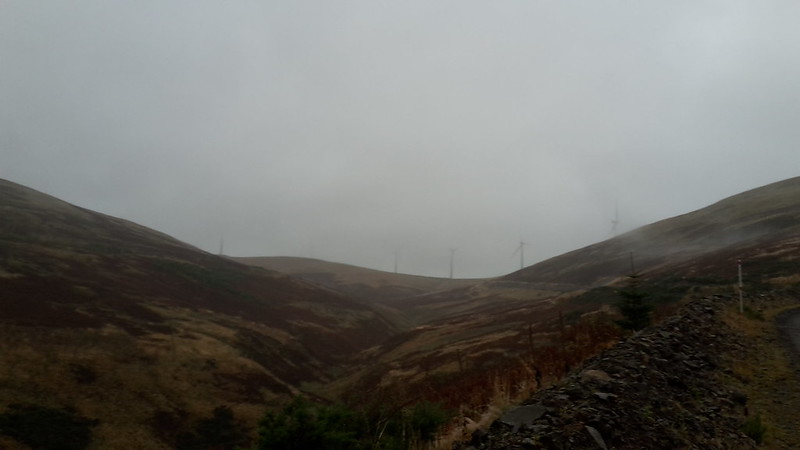 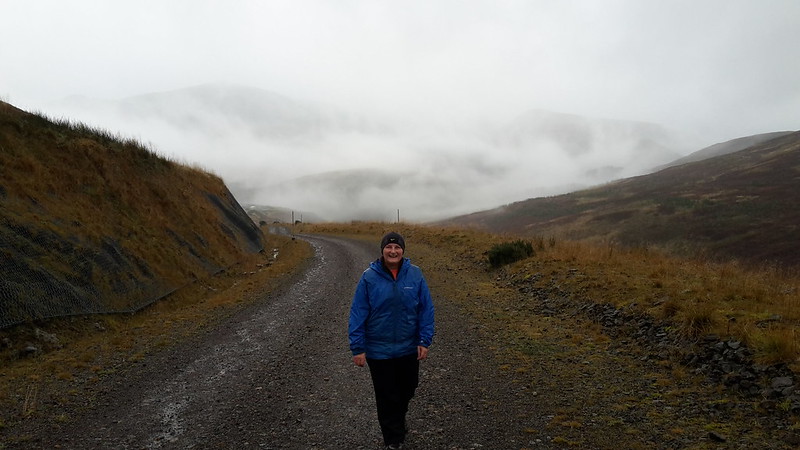 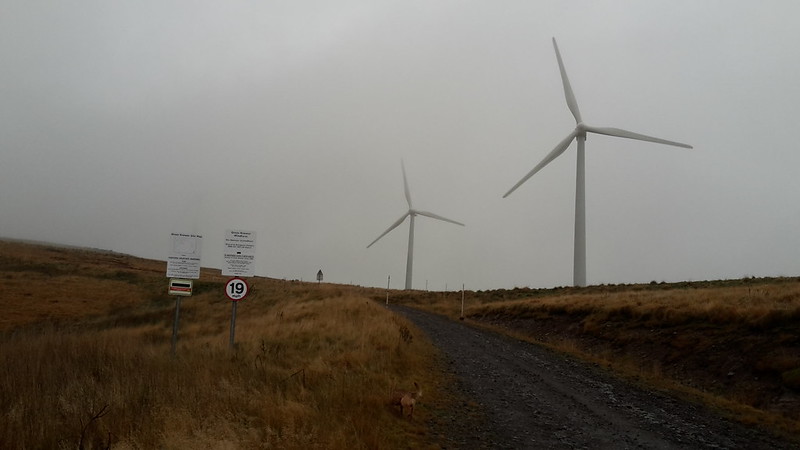 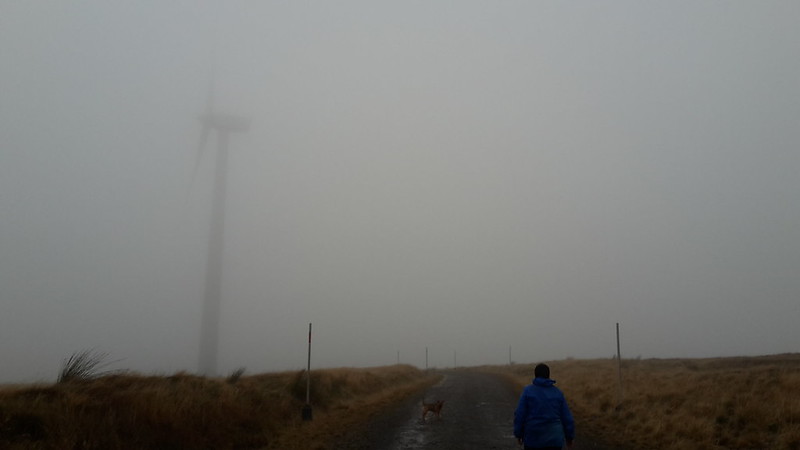 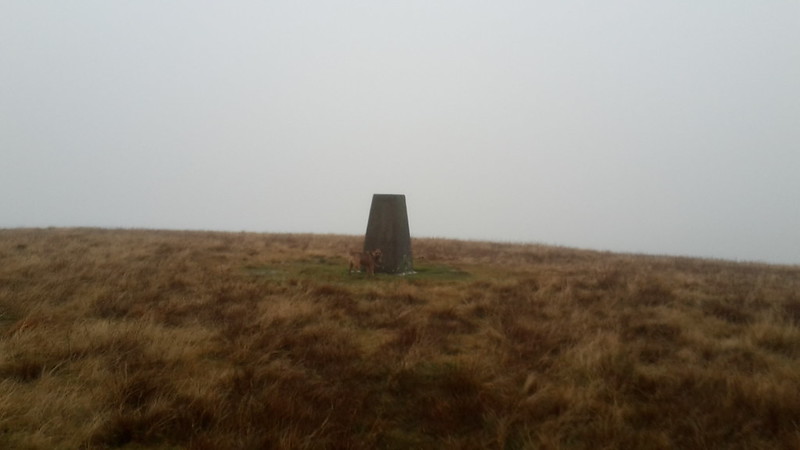 It was raining heavily now and the wind had picked up significantly, the noises emanating from the turbines were now quite unnerving, with the quiet sirens of earlier now sounding like missiles flying through the air. Ferris was giving each turbine a wide berth as he passed, until he spotted a mountain hare and tore off after it back along the track. He was gone a good few minutes and we were getting colder and wetter, it wouldn't be long until dark and we had our daughter to collect from work. Elizabeth continued walking towards the car and I set off back along the way we'd come but, Ferris soon re-appeared at a rate of knots and we were on our way again.

We simply returned via the outward route along the track and, after the bend at the high end of the track, the flank of Ben Thrush provided a bit of shelter from the full force of the elements. The waterproofs had been given a thorough test today and stood up well to the conditions. Before long we were back to the relative warmth of the car and the short drive home.

We returned home to this little beauty cooking away nicely in the oven, Lamb Shank Pie... 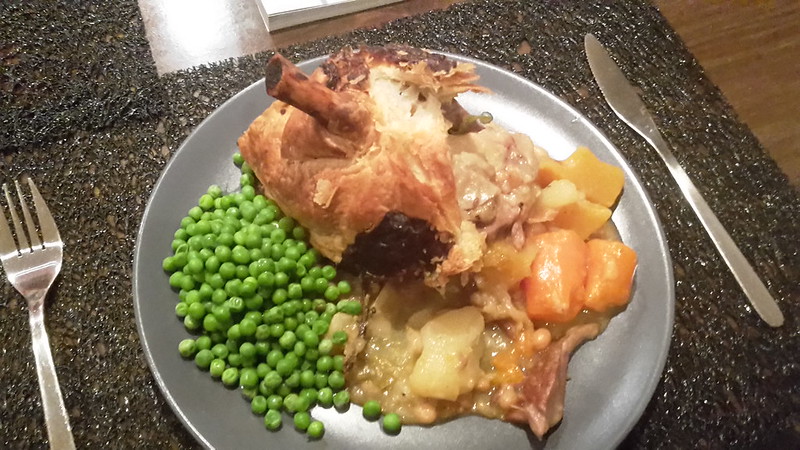 We've a lot on next weekend but, if we can manage Innerdouny Hill we will do however, failing that, we'll be there the following week, hoping for better weather, clearer conditions and some views.