Palate cleansing on Beinn a' Bheithir

Palate cleansing on Beinn a' Bheithir


This was the second part of a long weekend that myself and Hill Bill spent in late September 2015 over on the west. I have already compiled a report for the first leg - a 16 hour mammoth that saw us tick off all the Mamores in one fell swoop (http://www.walkhighlands.co.uk/Forum/viewtopic.php?f=9&t=58042). The Beinn a’ Bheithir duo in comparison would be a far less less meaty affair - a bit of a palate cleanser if you will, the lemon sorbet to counter the all-you-can-eat buffet we feasted on two days prior.

Our day between the Mamores and the Beinn a’ Bheithir brace was allocated for rest and recuperation. And what a day it turned out to be as we sat in the Ben Nevis bar in Fort William and watched Aberdeen beat Celtic to record their best ever start to a league campaign. An historic occasion that evidently put the Ben Nevis bar & grill firmly on the map as a few days later, Jeremy Corbyn ducked in to see what all the fuss was about, clearly deeming it more in his vested interest to sample the delights of their menu rather than be sworn in to the Privy Council.

As for the walk, we left our very comfortable B&B in Fort William and arrived at the Ballachulish Co-Op car park a shade before 11am. An almost unheard of start time for us - we’re usually coming off the hills around then - but as we weren’t heading home until the following day time was aplenty. We made a quick pit stop to stock up on the vital suppliers - Lucozade, pork pies and nectarines (the latter now a staple after its revitalising effects we experienced on the Mamores) - and so with the food and drink cachet replenished, we were ready to commence proceedings.

Fortuitously, we struck it lucky again with the weather as the downbeat forecast we expected had given way to a positively balmy morning. What followed was a tough and sweaty climb up the steep slopes of Beinn Bhan and there were more than a few ‘Hail Mary’ grips on the heather before we emerged onto the ridge. The grunt work now done, we lapped up the glorious views unfolding before us with Loch Leven - flanked by the Mamores and Glencoe ranges to its north and south respectively - looking particularly inviting. Good spot for a nectarine Cameras packed away, we pressed on, passing a series of cairns on the ridge before heading up the scree path to reach the peak of Sgorr Bhan. Unfortunately, the weather soon turned and with the fog rolling in we weren’t afforded a great view of the curving, connecting ridge that leads to the summit of Sgorr Dhearg. However, we did at least manage to bank the obligatory snap of the misty cairn to add to our ever expanding portfolio. (We always joke that if YouBet! made a comeback on TV, we would challenge ourselves to identify Scottish peaks based solely on piles of rocks photographed in poor weather).

We didn’t hang around long and with the wind also entering the fray, we dropped down to the bealach to seek shelter and the warming comforts of a pork pie laced with Colman’s mustard. Descending out of the cloud we could now see our next target, Sgorr Dhonuill, looming ahead with its cone-like features looking very pleasing on the eye. Coming off Sgorr Dhearg towards the bealach The ascent of this hill is grassy to begin with, but soon turns into a more rocky affair. This does require some scrambling, but it is light and nothing onerous, and the exposed airy section just before the summit is easily manageable. Upon reaching the summit, we roamed its wide expanse and were rewarded with good views down Loch Linnhe and Loch Leven. With nothing presenting itself in the other directions we retraced our steps and returned to the bealach. The yomp down into Gleann a’Chaolais is a boggy one, often pathless and it would be easy to take an unintended detour and miss the outward path. However, having taken a couple of snapshots of the route recommended by WH on my phone (a worthwhile addition to the map and compass), we were able to join up with the forest track without any issue. Keep to the right of the fence posts and you’ll eventually pick up a Forestry Commission sign that leads you to a well constructed path through the trees. Carry on and when you come to a track go straight over before heading right at the next junction which will eventually take you to the A82. 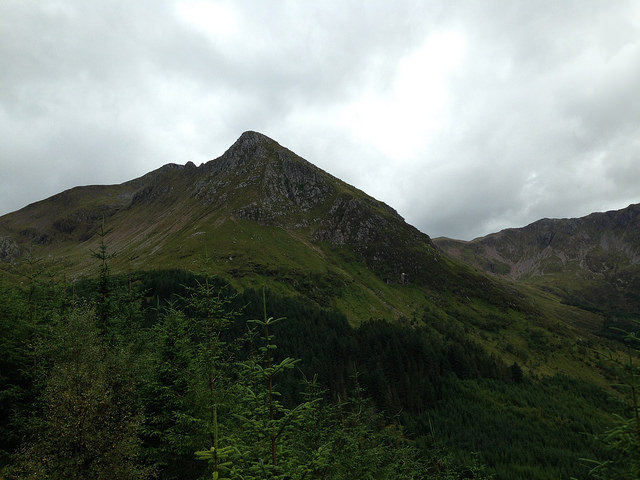 Looking back to Sgorr Dhonuill as we make the descent While we were doing the aforementioned section of the walk, the sun had made a welcome reappearance and we paused to take photographs at the many opportunities that are peppered along the way, the views across Loch Linnhe being the pick of the bunch. Continuing on, we passed masses of neatly stacked and freshly chopped trees before emerging onto the roadside just west of St John’s Church. Walking next to the road is never an enjoyable end to a walk but it is only for a kilometre or so before you cut away to head through the village. 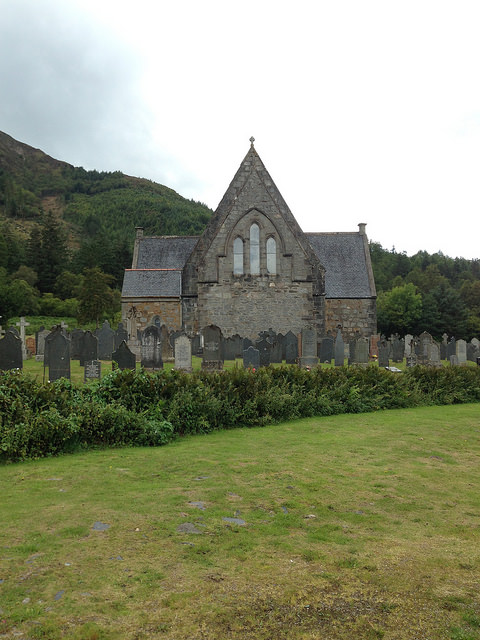 We reached the car park around 16:30 and made the short journey back to Fort William feeling very content with our efforts. Another great day in the hills and a fine way to round off a long weekend of bagging. We looked forward to returning to this part of the country and ticking off some more of its Munros.

(A short video of the walk can be found in the link below for anyone interested - some good footage but a slightly odd pairing of soundtracks...)
https://www.youtube.com/watch?v=pAB-BprX-_0

We're staying at the foot of this pair right now which is frustrating me as it's not the weather to be going up them with Storm Barney about to strike!

Ah, I remember that steep pull up Beinn Bhan very well. Hard work!
You both increased your hill tally substantially over that weekend.

My preferred ascent route is now via School-House ridge of Sgorr Bhan, a nice scramble that doesn't feel like walking up a wet mattress

I enjoyed reading that and looking at the photos, it brought back some favourite memories of one of my favourite walks.

dogplodder wrote:We're staying at the foot of this pair right now which is frustrating me as it's not the weather to be going up them with Storm Barney about to strike!

dogplodder - did you get up them in the end of did Mother Nature have other ideas?

Silverhill wrote:Ah, I remember that steep pull up Beinn Bhan very well. Hard work!
You both increased your hill tally substantially over that weekend.

Thanks Silverhill - the long weekend is the way forward from now on!

BobMcBob wrote:Hail Mary on the heather is my main memory of my first trip up there

My preferred ascent route is now via School-House ridge of Sgorr Bhan, a nice scramble that doesn't feel like walking up a wet mattress

I enjoyed reading that and looking at the photos, it brought back some favourite memories of one of my favourite walks.

BobMcBob - glad the report brought you some good memories. The Hail Mary on the heather is a regular occurrence in our walks! Hill Bill's soon-to-be-published report on a Cairngorms epic will attest to that!