Gairich.gpx Open full screen  NB: Walkhighlands is not responsible for the accuracy of gpx files in users posts
Yesterday’s, today’s and tomorrow’s grand plan had been a wild camping trip around Loch Quoich for some munros. Unfortunately, the weather was appalling yesterday (MWIS: upland gales, constant precipitation, wind chill -13C) and plans for walking were abandoned. Subsequently my trek was trimmed down from three continuous to two separate days for today and tomorrow. As today’s forecast wasn’t that great either, Gairich fitted the bill. 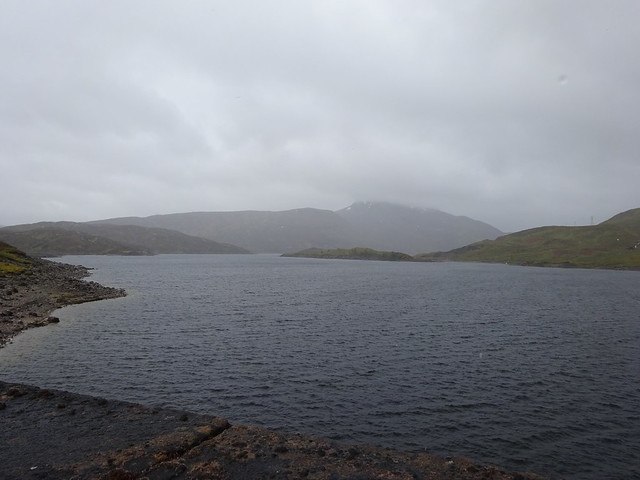 I parked behind the dam. Initially the path after the dam is not too bad, but soon it becomes boggier and boggier and with that more and more trails branch off to (unsuccessfully) avoid the mud. Near Meall a’Chait a herd of deer was grazing very contently. What a photo opportunity! Got the camera out, clicked and … no click. The battery was dead. I forgot to charge it last night, blast! Not that today was great for taking pictures, but it is still nice to have a few to tell the day’s story. Alas.

As I descended down the low bealach towards the wood, another walker approached from the opposite direction. He had just done Gairich and it was only 10am! He kindly informed me that it was easier to cross the burn further up stream rather than at the wood, as it was quite wide there.
The burn seemed more like very soggy ground with fast flowing water on top of it. It looked deceptively shallow, but I wasn’t going to test its depth, so a short diversion up stream (NW) was made. Then back to the edge of the wood to pick up a path going up Druim na Geid Salaich. The squelch-squelch of the lower ground was now replaced by the splash-splash of water running down the path. This proved to be a good thing. Further on the path becomes very sketchy, but by following the water course I managed to stick to the path. Sadly not much going on in the views department.

As per the walk description the stalkers path keeps to the left of the ridge and another path branches off from this and continues up the ridge. There were some scrambly rocky sections on the way up, but nothing difficult. With no views at the top and no need to look for the most photogenic side of the cairn for my usual summit picture, the descent followed almost immediately. The scrambly bits were OK on the way down and once back to gentler slopes it was just a matter of following the water course back to the wood. I now started noticing some dampness in the foot area and by the time I was back on the dam, my feet were squelching in my boots. At the car, closer inspection revealed that the rubber rands were in need of some repair. Fingers crossed for better weather for the next few days then!

Tonight I would be wild camping in Glen Kingie and Trip Advisor hadn’t mentioned any drying facilities there. So I stuffed my boots with newspaper and drove off with the fan on full blast, hoping to dry them out a bit. On the way it also occurred to me that there would be no chance to charge my camera. No pictures then tomorrow either. Arghh!

I really must get a charger for the car or a power bank.

Silverhill, I admire your fortitude. It must be awful planning these long multi-day hill-walking trips only to find it pouring rain the whole time! And then find your boots are leaking. I would be running for home after a day of it! However, you are always seeing the best in every situation. Hopefully we'll get some more photos from you soon.

Now I'm thinking of you camping with all your wet gear and more days of it to come ...

Confused by the date you did this - was it June or November? Your description sounds like November on a bad day.

Thanks Annie, you are very kind! I think I was more miffed about the camera than about the leaky boots.

It’s amazing the difference a pair of dry socks makes, even if the boots are still damp. And it didn’t rain the day after, so it all turned out well.

Thanks dogplodder! I’m afraid it was June. It certainly was very autumnal for most of my holiday. For the first time in 5 years I had to cut trips short, swap days around and even abandon walking, whereas normally in June I can walk regardless of the weather.