Wall-to-wall sunshine was forecast for Saturday 21st, with promise of light snow on the ground. Sounded like a good day for walking in the Tweedsmuirs - a surprisingly neglected area (at least by Karl and myself) considering the quality of the scenery and walking.

The plan was to bag the Corbett of Hart Fell via the horseshoe circuit around Blackhope Burn, taking in the three additional Donalds of Under Saddle Yoke, Cape Law and Swatte Fell. Hopefully we'd be back in time for a brew in Moffat!

Parked up just east of the bridge over Blackhope Burn and set off walking at 9.15am. We'd decided to go anti-clockwise as we liked the look of the ascent up the ridge of Saddle Yoke. 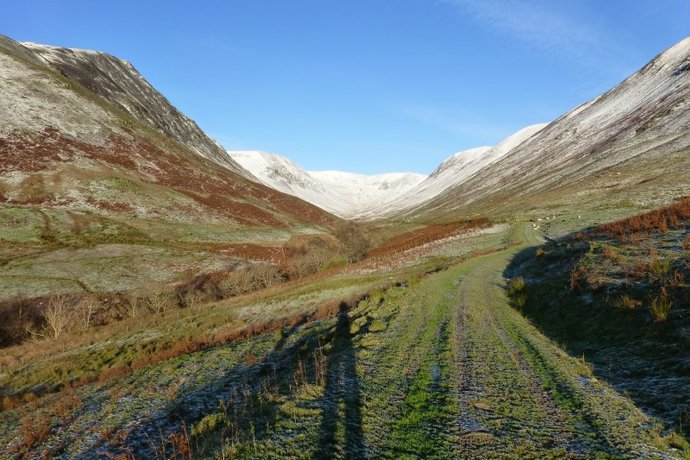 Looking up the Blackhope valley to a snowy Hart Fell, from the track at the start.

A gate with a sign warning that dogs might be shot opens onto a vehicle track heading up the Blackhope valley. After a few hundred yards is a second gate giving access to the open hillside. We struck off right here to gain the ridge. There wasn't much evidence of a path (maybe the dusting of snow helped to conceal it), so we just followed our noses up, which was fun. A clear path emerged on the little 494m top. Looking across to Black Craig from the 494m top.

There was a stiff breeze up here so on went the windproofs (it was pretty cold too), but according to the forecast the wind would ease off as the day progressed. 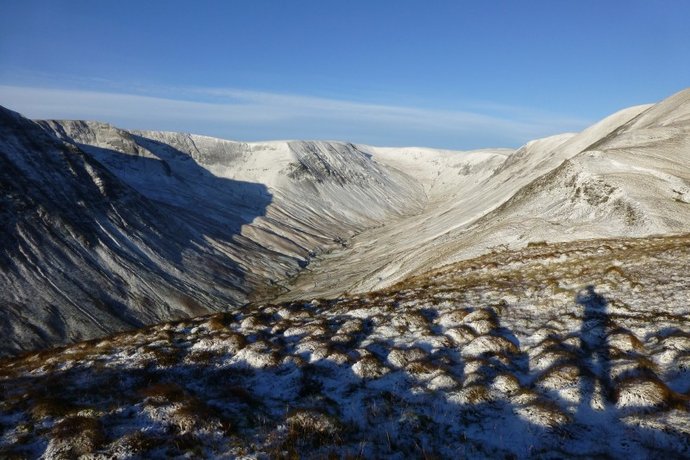 Hart Fell at the head of Blackhope Burn 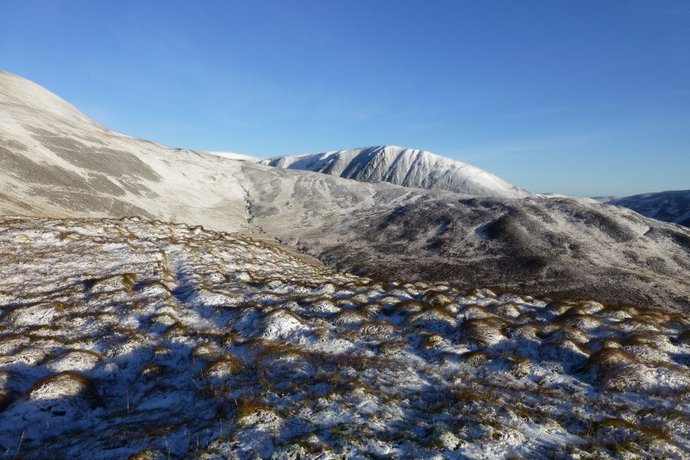 Looking south to Croft Head and the Knowes The wind was very keen and we wondered if the forecast would be right. On the surprisingly narrow ridge of Saddle Yoke 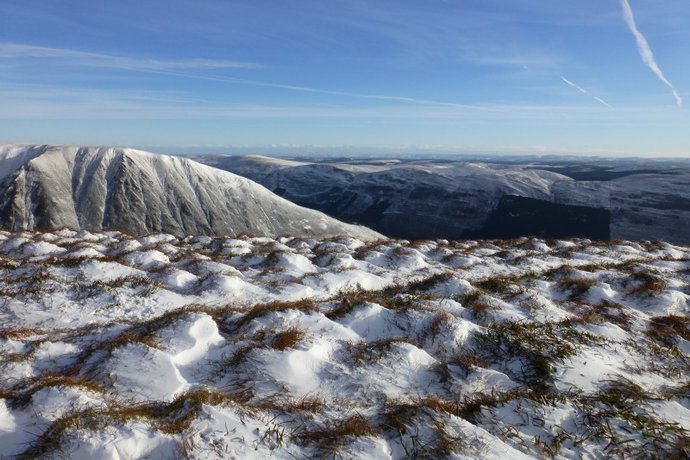 The Bell Craig hills from Under Saddle Yoke

Heading down to the col from Under Saddle Yoke and up towards Cape Law was fairly rough going on tussocky grass, but things improved as a faint path emerged near the fence higher on Cape Law. We expected it to be blowing a hoolie up here, but there was only a gentle breeze. Looked like the forecast was right after all. More tussocky going down from Cape Law and back up towards Hartfell Rig - rather tiring in fact. Smoother walking from here on. Time for sandwiches and a hot drink in the partial shelter around the trig point. The views down Black Craig were spectacular. The descent from Black Craig was very steep towards the bottom, with only the vaguest of paths to follow among the sheeptrods. But this had been a fascinating walk with some impressive scenery, extensive views and grand walking in big, open country. Very enjoyable.

We were back at the car by 3.45pm - would we make the teashop in Moffat before it closed? Yeah, no problem; and a fine brew it was too!

What a great walk in fantastic conditions!

The dusting of snow gives these hills a completely different character, they seem much wilder.

The dusting of snow gives these hills a completely

different character, they seem much wilder.

My first experience of this area was on White Coomb less than a year ago, and it was a revelation. I just didn't realize how wild and dramatic these hills are. Considering how close they are to my home that's really quite shameful!

As you say, a dusting of snow seems to exaggerate their wildness! The sunny, crisp conditions were such a pleasant contrast to the abysmal weather we'd been having up until then.

Am planning on going to do this route in May/June. Have had good reports on its' quality, from your pictures and report it seems to be true!

Nige R wrote:Am planning on going to do this route in May/June. Have had good reports on its' quality, from your pictures and report it seems to be true!

Sorry to have missed your comment Nige, not sure what happened there, but thanks

We were surprised at the quality of the scenery in these underrated hills. It is indeed a good walk, though Cape Law was a bit of a drag and the views from it rather drab. Missing Cape Law out would actually make a better (and shorter) walk, though if you're ticking Donalds then you'll probably want to include it. Good luck with your trip in May/June.