Originally had planned to do Culter Fell, but got up late as a neighbour's burglar alarm going off had kept me awake in the night. So decided to head close to home and the Lammermuirs again.Spur of the moment decision had me heading to Hopes reservoir area South of Gifford at the North end of the hills. Easy enough to get to - you head to Longyester then take the turning marked to Hopes. A mile or so along the road you arrive at some farm cottages - one of the farm workers pointed me towards parking further up the road at the filter station halfway to the reservoir. From here theres a tarmac road up to another group of cottages and the start of the track to the reservoir. There are a number of tracks leading off up the hills from this point. I decided to take the one on the left that headed more or less straight up to Harestone Hill. Steep at first then eases off - the first time I've really walked in snow! Harestone Hill - the track I took is fairly clear 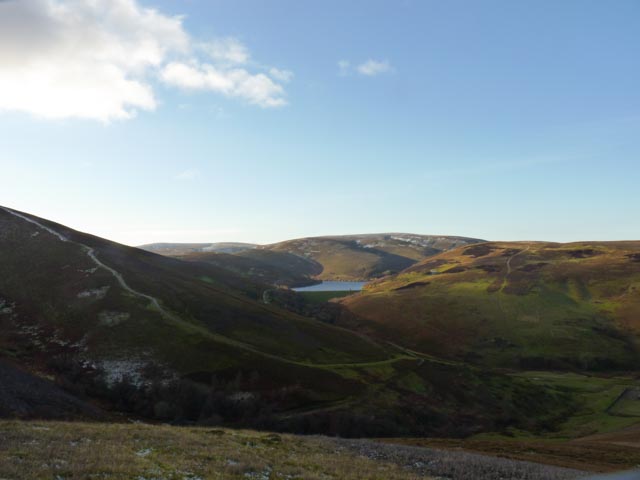 A steady climb gets you to the top of the ridge, then you can either go straight on to do the circuit above Hopes reservoir, or do as I did, branch left on a path up to the cairns at the top of Harestone Hill. Its a big cairn for a smallish hill - and theres a shelter too. The top offers great view especially North West and North east. I could make out the most of the snow-covered peaks shown in the virtual panoramas: There's a lot of options for the return walk - but it was pretty cold so I thought I'd go back a different way. However at this point a couple of the buggeration factors on the day happened. I put my paper print - off Walkhighlands map down on a stone at the cairn to plot a route to join a track that descended to Easter Hopes. Of course it then turned to mush in the wet! At the same time my phone ran out of power so I couldnt access my GPS app

. So I was going fairly blind - I found a track heading North East from the cairn that was icy and boggy at the same time and needed great care, and which I thought would join a better atv track I could see that headed down from the windfarm. Found it eventually and followed it down. The route down - eventually! Then another buggeration factor with no map to follow - branched off on a path heading West I thought would take me back to where my car was. It didn't, but took me back to where your start the climb up the ridge. Another helpful farmworker pointed me back in the right direction

which meant retracing my steps and adding an uneccessary mile to my car.

Other buggerations: forgot to take any water, got very dehydrated and only had a small flask of coffee to last me 3 hours, and on setting off left my gloves on top of the car. Found out when I'd down half a mile so had to go back for them - another uneccessary mile walked!

That looks like an enjoyable walk! I put photo copies of my maps in a waterproof case. There are various brands, but I prefer the Ortlieb A4 document case. Last year I learnt to tie the case to my rucksack

, after a whirl wind snatched it from my hands and blew it off the hill.

Yup - right about the map case. Here's where it got a bit stupid as I've a good map case and usually use it. However as I'd decided to go out on the spur of the moment I didnt have it with me! As I said - lessons learnt! And yes - its a lovely spot for a short enjoyable walk.