After doing Gairich earlier today I drove to Strathan to make a start with the walk in to Sgurr Mor. I quite enjoyed the drive along the B8005 with the lovely views over Loch Lochy. The weather had brightened up too. But then the road got narrower and there were sharp bends and blind summits, loads of them. The setting western sun didn’t improve the experience. The rollercoaster ride along this road has been well documented in all reports I have read of walks starting from Glen Dessarry. The journey reminded me of the reason why I never liked this particular attraction in theme parks. Near Strathan at the end of the public road some fresh air was needed before I dared to eat my dinner.

I packed my rucksack for an overnighter, got into my wet boots and set off along the track. As usual trying hard to ignore the feeling of unease telling me to head home instead of into the wild at this time of day. There was an unhelpful sign. But the magnificent view over Strathan towards Streap and Sgurr Thuilm brought back happy memories from when I did the Cape Wrath Trail. 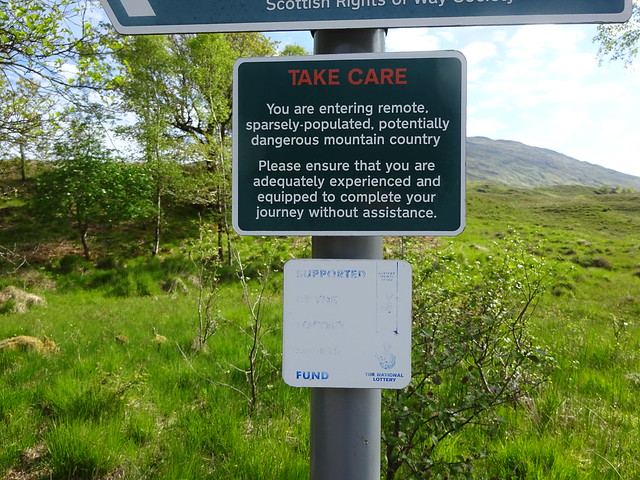 The track is in great condition, much better than when I was here last. I had a chat with the former estate ranger who was feeding his horses here and then left the track just past the Allt na Feithe and followed the path along the river to the broad bealach. From there I descended to Glen Kingie. This was pathless but the terrain wasn’t too rough. The river Kingie was crossed without problems further upstream. Plan was to climb up the ridge and have a high camp in between An Eag and Sgurr Beag, but the wind felt much stronger than the forecast 15mph, so the tent was pitched in the glen, roughly south of Sgurr Beag. It was now 9.30pm, time to head for the sleeping bag. The tent didn’t flap too much during the night, but there was some light rain.

An unusually bright light woke me up in the morning. It turned out it was the sun! Quick, get up and get walking before it disappears!
Sleepy eyes and a ditto brain make mistakes. As I surveyed the surroundings to pinpoint my location, it seemed that I was south of the bealach between An Eag and Sgurr Beag. So it would just be a matter of ascending NE. I picked up what appeared to be the path showing on the map and started climbing. After a fair amount of steep uphill action, which offered a better overview of the hills it became clear I was heading for the bealach between Sgurr Beag and Sgurr Mor, doh! That explained the incredibly steep ground and why the path had disappeared.

Better change direction and aim for Sgurr Beag instead, along that marginally less steep SE slope….
Once on Sgurr Beag I had second breakfast and then started down the steep but good path and then up the equally steep but good path to Sgurr Mor. It was a lovely crisp and sunny morning. What a great day for walking! On the summit the views towards Gairich, the hills north of Loch Quoich, and towards the west were magnificent.

Back down and up the same way and then a rather long descent off Sgurr Beag. From An Eag, the way to Sgurr nan Coireachan looked incredibly steep. But as usual it was one of those that looks worse than it actually is. There is no path, so it’s a matter of pick your own route which was tremendous fun.
I think the cloud was down on Sgurr nan Coireachan, because my memories are now a bit vague and I have no pictures to go by. It was definitely clagged over along the Garbh Chiochs ridge, which seemed to go on forever, with hump after hump suggesting I had reached the summit. I’m sure it’s all very obvious in good weather, but in the thick mist there was no way to gauge relative height and distance. Route finding was no problem by the way, just follow the wall.

Just after having been conned for the umpteenth time by an imposter top, I met a nice couple who confirmed that the next hump wasn’t the summit either. We ended up having a good chat. They were staying at A’Chuill bothy and doing the three munros in a clockwise loop. They kindly invited me over for a cuppa at the bothy on my way back. It was really nice to have met some people there. At least I wasn’t the only one mad enough to go walking in these conditions. A while later I finally got to the summit of Garbh Chioch Mhor, enveloped in glorious mist. According to the SMC hillwalkers guide it is only an hour’s walk from Sgurr nan Coireachan to Garbh Chioch Mhor. A very optimistic estimation.

The descent to the Feadan na Ciche col was very steep, rocky and slippery, but in a weird way it was fun too, finding the best way down. It was not a fast descent though. Onwards to Sgurr na Ciche, the prize munro in my opinion, with its distinctive shape and it being the remotest of the Glen Dessarry lot. More steep rock and also some snow to be negotiated. Although the way up was not always obvious in the mist, I can’t have been too far off the route as I emerged on the ridge at the helpful marker cairn. It then was only a short walk to the summit. The cloud was now thinner and the wind was moving it along, but a view never materialised. Ah well. Back to the col and down the very wet boulder filled gully. Hands and concentration required!

Once down visibility was much better. It was now just a steep, pathless, rough and sometimes boggy descent to the glen. But on the upside, it offered a great view of the twin shaped Lochan a’ Mhaim, along which some 10 years ago I had been boghopping on the way to Carnach. It was the second day of the Cape Wrath Trail, the most wonderful long distance walk I’ve ever done. Happy memories again.

Some way down a track materialised, which I followed to the glen. I met another walker here, on his way to a wild camp spot and the Glen Dessarry munros tomorrow. We had a nice chat. Once in the glen it was almost plain sailing apart from some boggy sections and a not so straightforward crossing of the Allt Coire nan Uth.
A’ Chuil bothy came into sight. The prospect of a cuppa and another good chat was very tempting, but time was getting on and I still had quite a drive ahead of me. Past Upper Glendessarry a herd of deer was grazing very contently. One for the photographic memory, if only I had it.
Last time I was here, Glendessarry Lodge was being refurbished and it was clad in scaffolding. It looked much better now. I arrived back at the car after 12.5 hours of walking. Quite tired, but at least the legs got a rest whilst driving back.

That's a mighty big walk Silverhill! Pity about the clag - it was the same for me when I did just the 3 in June this year; shame to have missed the views. Interesting strategy you had there, camping in Glen Kingie. Did you carry your tent etc. all the way round on the Monday? That would have been some feat! Or did you leave it pitched where it was? In which case you would have needed to collect it later - an unenviable task. Or have I missed something?

It is some walk, not so much the length but the terrain!
I’ve done it a few times now, nibbling a bit off the distance on the evening before. It spreads the ‘load’ somewhat. With two weeks of continuous bagging I need to pace myself. I indeed carried a full pack all the way. With a few sacrifices made (a tiny tent and no stove) it weighed around 9 kg, so it was doable. So much doable that I’m considering taking the stove next time. It was a shame about the weather, it had started off so promising. Ah well, it’s a reason to return.

It is some walk, not so much the length but the terrain!
I’ve done it a few times now, nibbling a bit off the distance on the evening before. It spreads the ‘load’ somewhat. With two weeks of continuous bagging I need to pace myself. I indeed carried a full pack all the way. With a few sacrifices made (a tiny tent and no stove) it weighed around 9 kg, so it was doable. So much doable that I’m considering taking the stove next time. It was a shame about the weather, it had started off so promising. Ah well, it’s a reason to return.

I'm impressed! Good idea to 'spread the load' though. I shall have to return to bag Sgurr Mor and if the weather's good it would be nice to do the others again. I'm not looking forward to that roller-coaster road along Loch Arkaig though!

Funnily enough the views from the rollercoaster road are great, but I didn’t dare to stop, just in case another car came round the bend.