A perfect winter day on Sgiath Chuil and Meall Glas

A perfect winter day on Sgiath Chuil and Meall Glas


Those of you who have read any of my previous reports will know that I enjoy a good solo mountain. Partly because I don’t know that many people who would be up for coming or free at the same time as me, and also because I’m quite happy going on my own and would much rather be alone than with someone who annoyed me. When winter was threatening recently I made several promises to people that I wouldn’t go up mountains in snow on my own. I’ve not done very much walking in snow and not going alone seemed to be sensible and not a promise I would struggle to keep.

Reading other people’s walk reports on here as well as the fact that I hadn’t been on the hills in over a month was making me seriously regret my rash promises. It was becoming an itch that was going to need scratched soon… I was eyeing up last Sunday as a day when I could potentially have walked and was getting frustrated. Then I noticed that another Walkhighlander was planning a trip that day! Not only that but it was 2 mountains that I’d been meaning to tackle for a while. I got in touch, made plans and bought an ice axe. Good to go!

I left Glasgow at 5.30 on Sunday morning and headed up the road, excited to be getting out again, slightly apprehensive as I wasn’t sure how much snow there would be and a whole lot tired. I hate driving the section of the A82 between Tarbet and Ardlui and the dark made it even worse. I stopped off in Crianlarich for a quick use of the ‘facilities’ and headed off down towards the layby at Auchessan, which I missed and had to do a U-turn…luckily there was no other traffic. Fortunately by the time I was about to pass the turning for a second time other people had arrived and I realised I was in the right place!

By this point it was fairly light and we could see an impressive looking coating of snow on Ben More on the other side of the road. We booted up and set off. The reports of the bogginess of this route have not been exaggerated. Once off the track, the path up the side of the burn was incredibly sloppy despite some of the ground being frozen. I was saved from wet feet by being second in line - always good to have a guinea pig!! 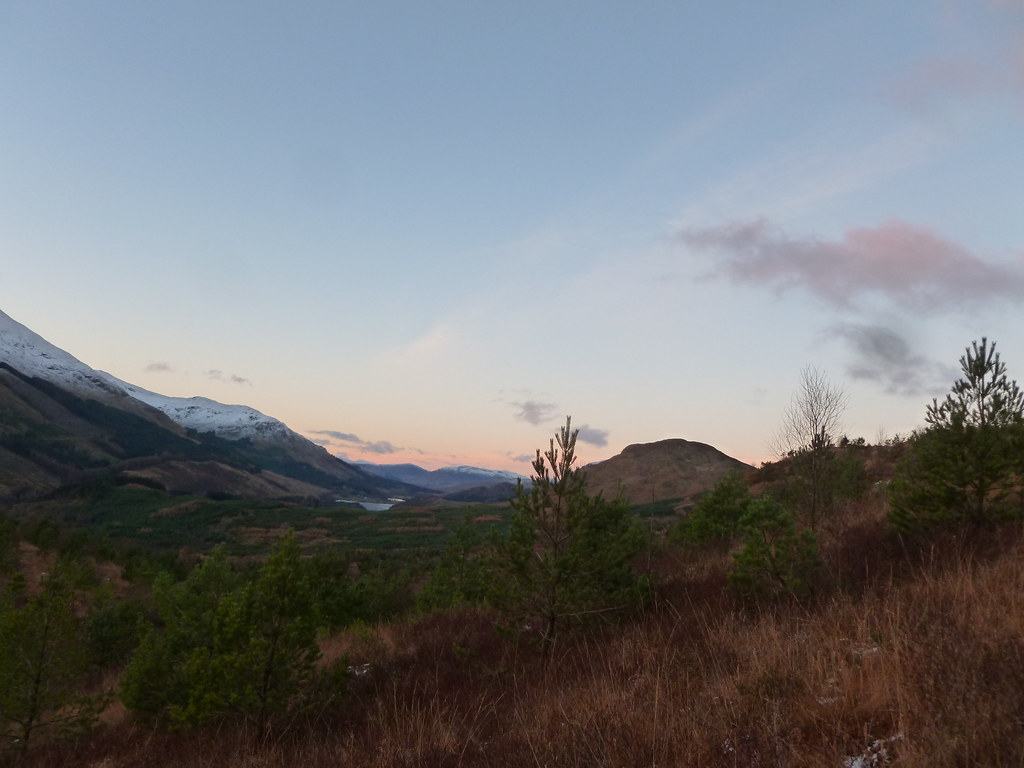 Looking back to Ben More: 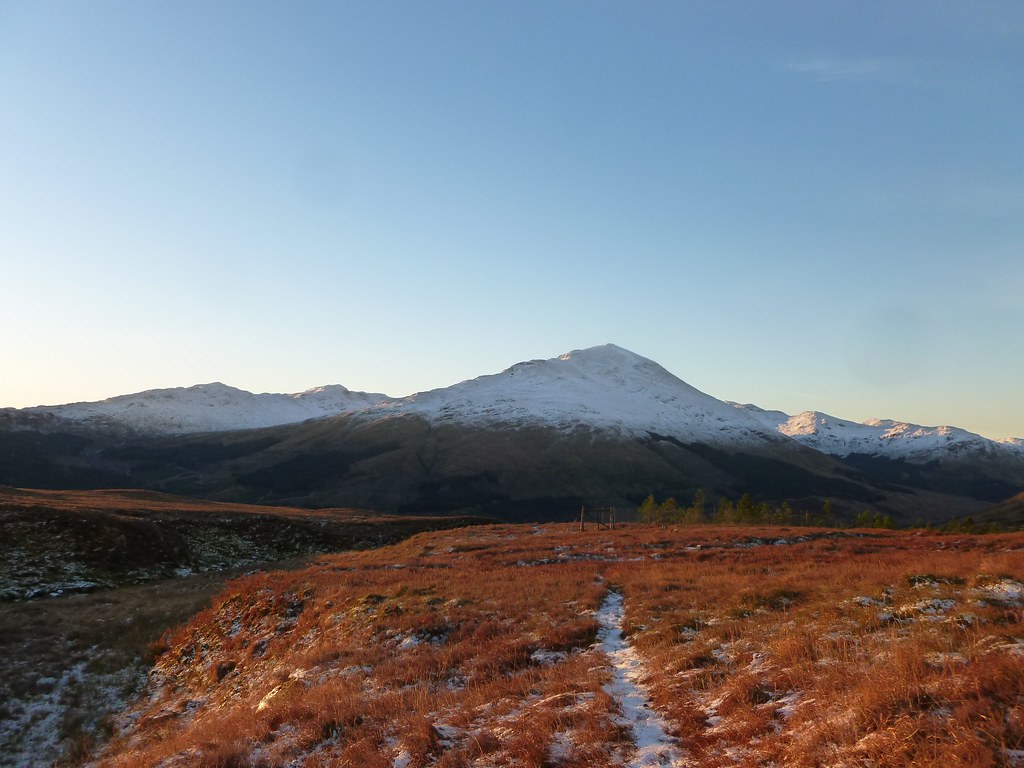 Once we were through the deer fence and on slightly higher ground conditions under-foot improved. The weather was absolutely perfect. We could see Sgiath Chuil ahead of us and over to the left the rest of our route. The snow was sparkling in the sunshine and I couldn’t have been happier. It was shaping up to be an excellent day! 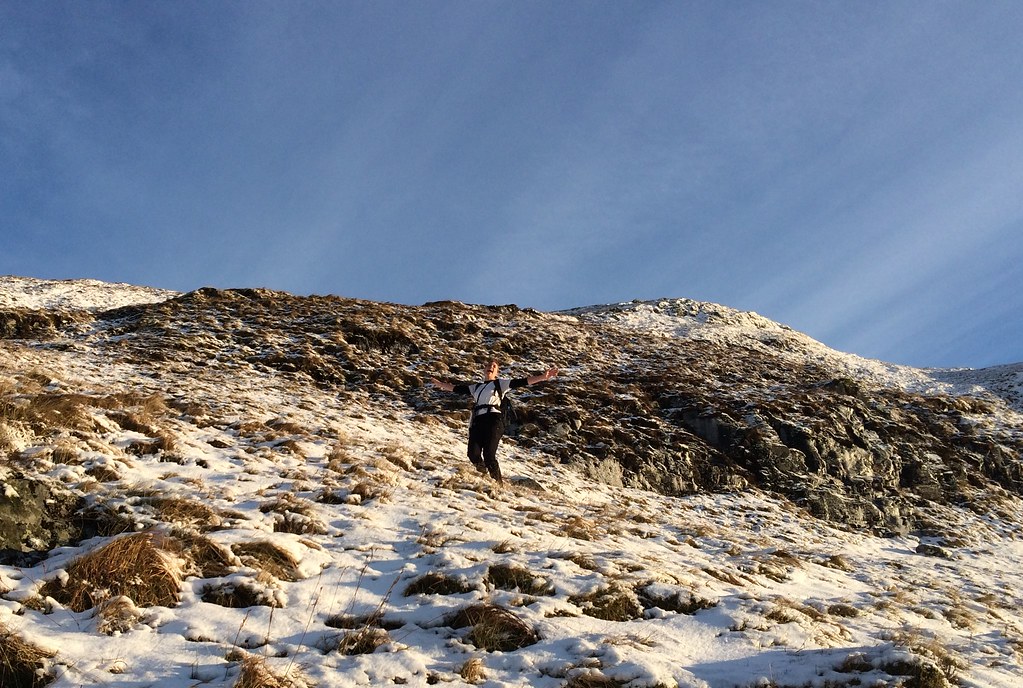 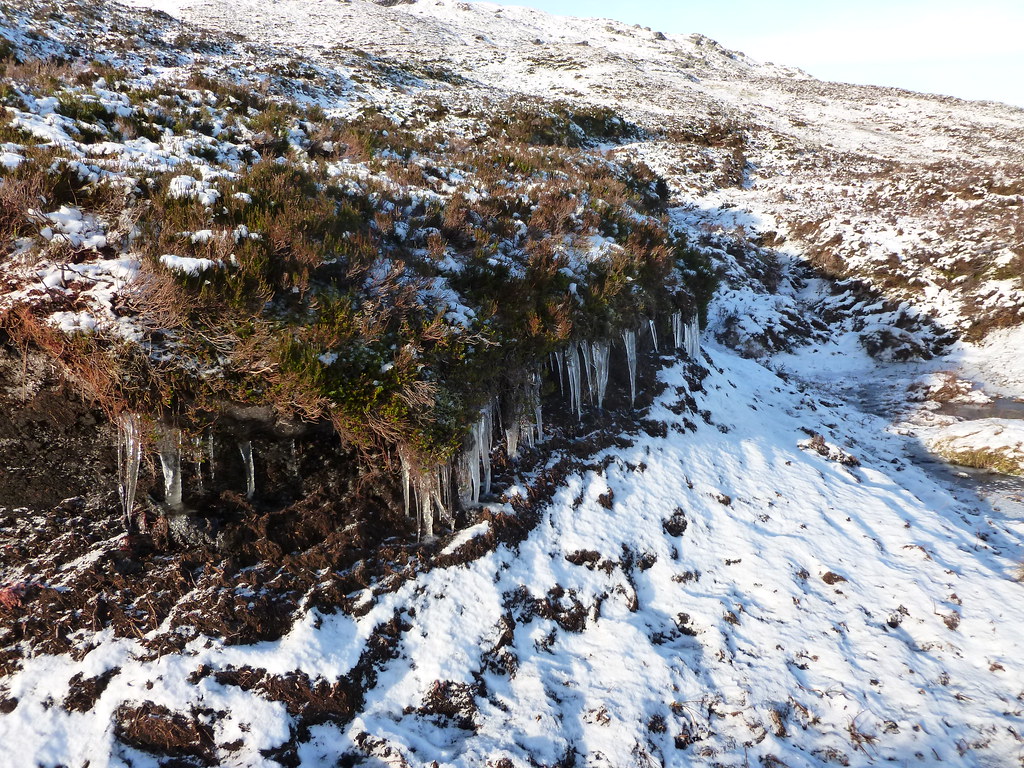 We headed straight for the snow covered lump ahead of us, soon getting into snow which got progressively deeper. The deeper it got, the more I was kicking myself for leaving my gaiters in the car. Every time my foot sunk into snow I got a load into my boot and up my leg! Eventually I gave up trying to scrape it out. We stomped on up through the snow, heading for false summit after false summit when eventually what turned out to be the real summit popped up – an imposing looking cone shape with a crag sitting on the top (easily passed either side as sggested in the walk description although when approaching it looks much trickier!) Summit number one

The wind picked up and I started adding clothes as quickly as possible but still ended up with numb fingers. The views were absolutely stunning – we snapped a few photos and headed off very quickly as it was pure Baltic up there. Not a day for hanging around unfortunately. 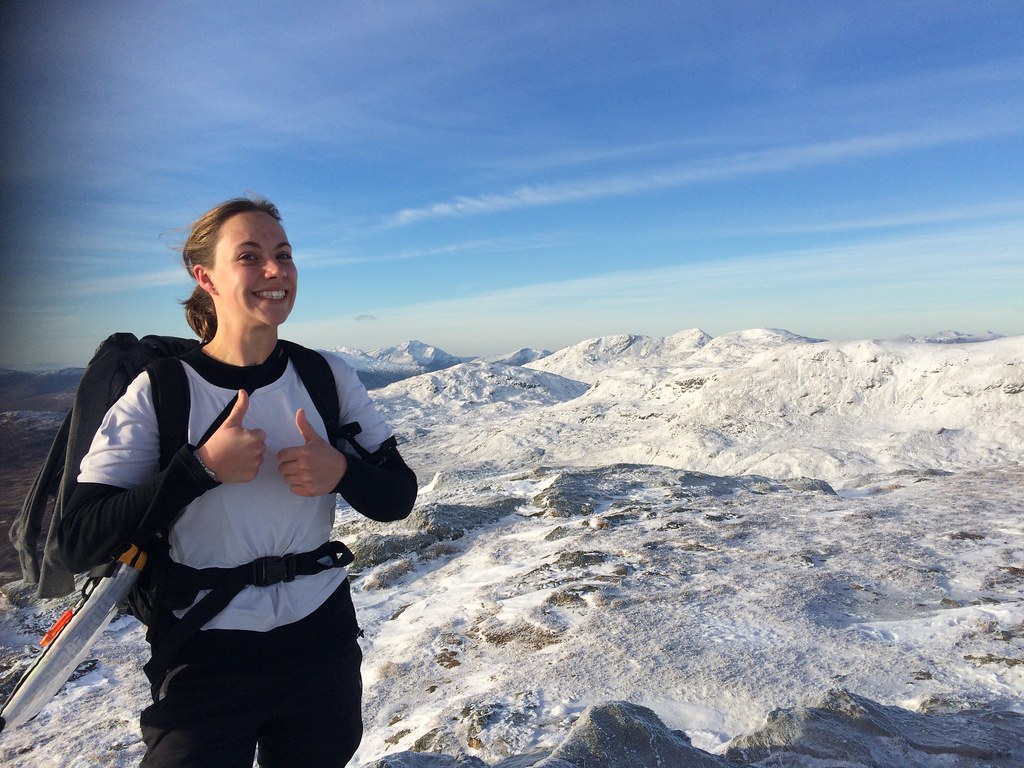 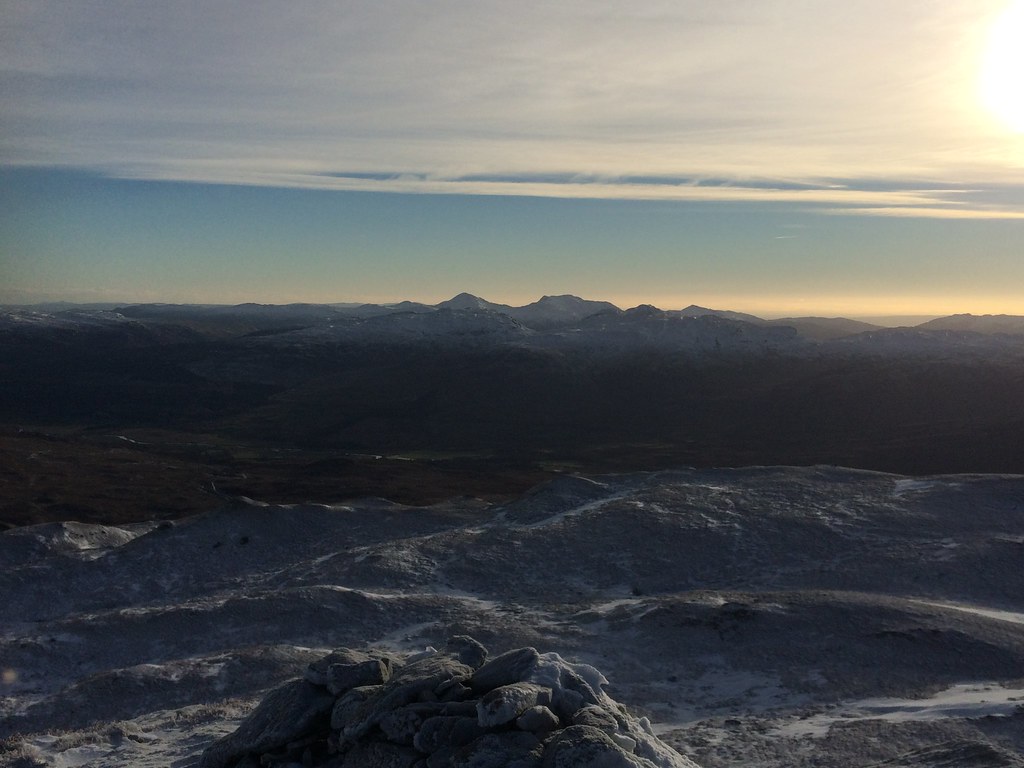 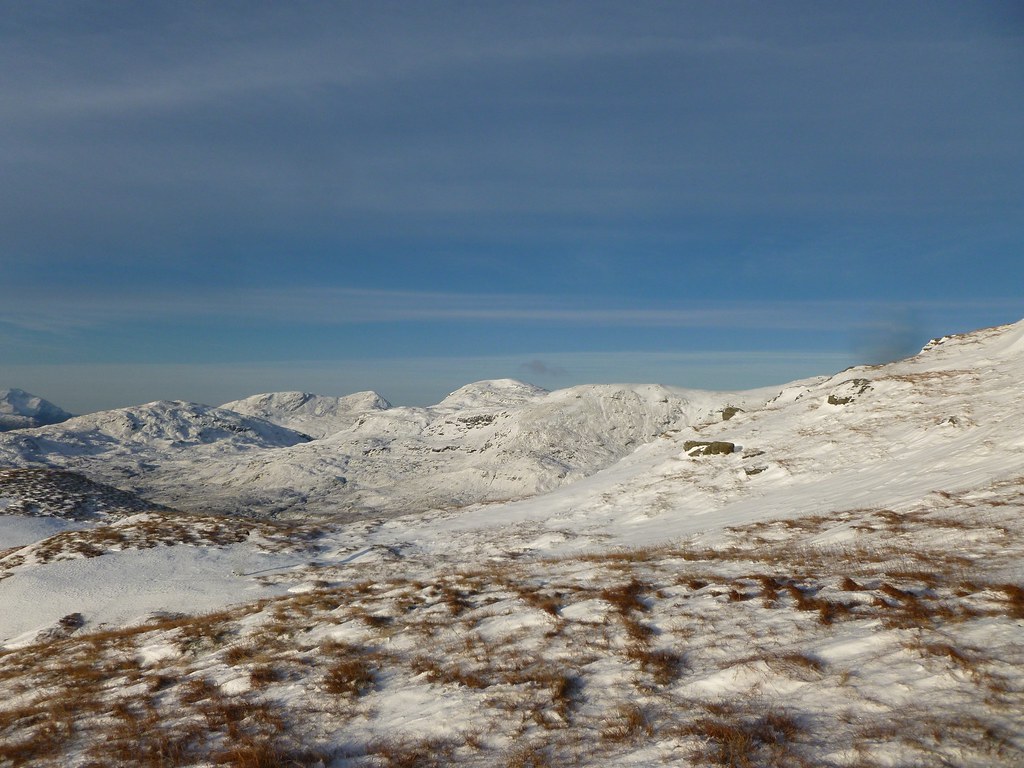 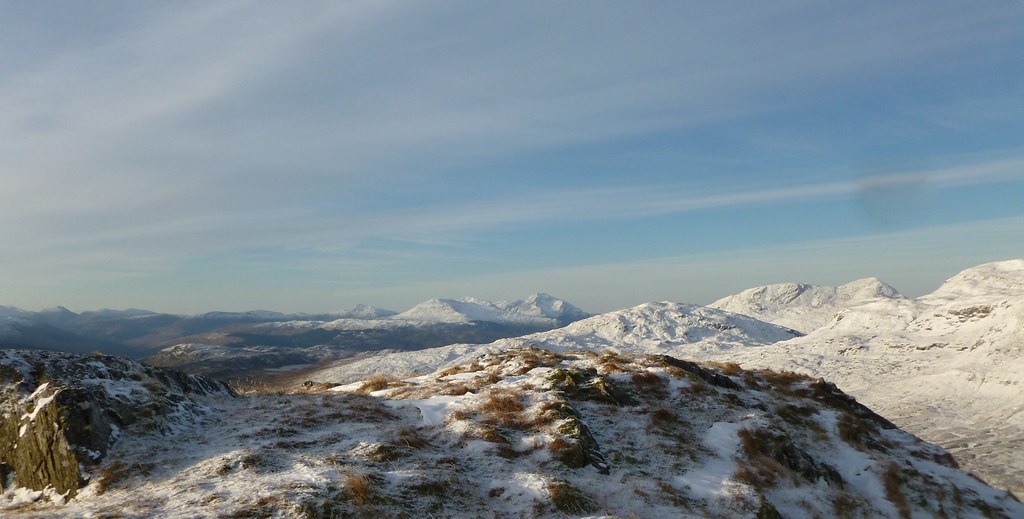 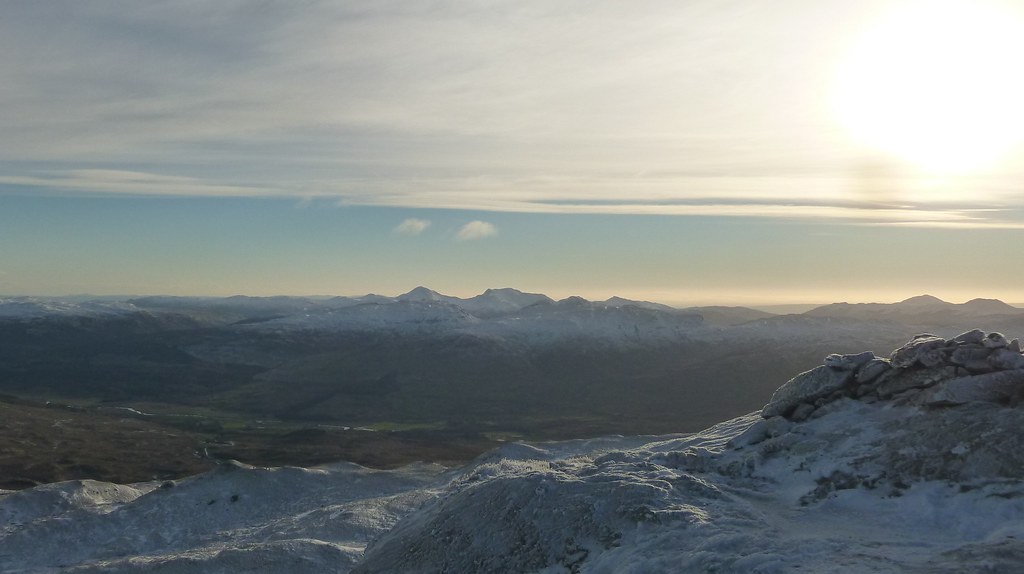 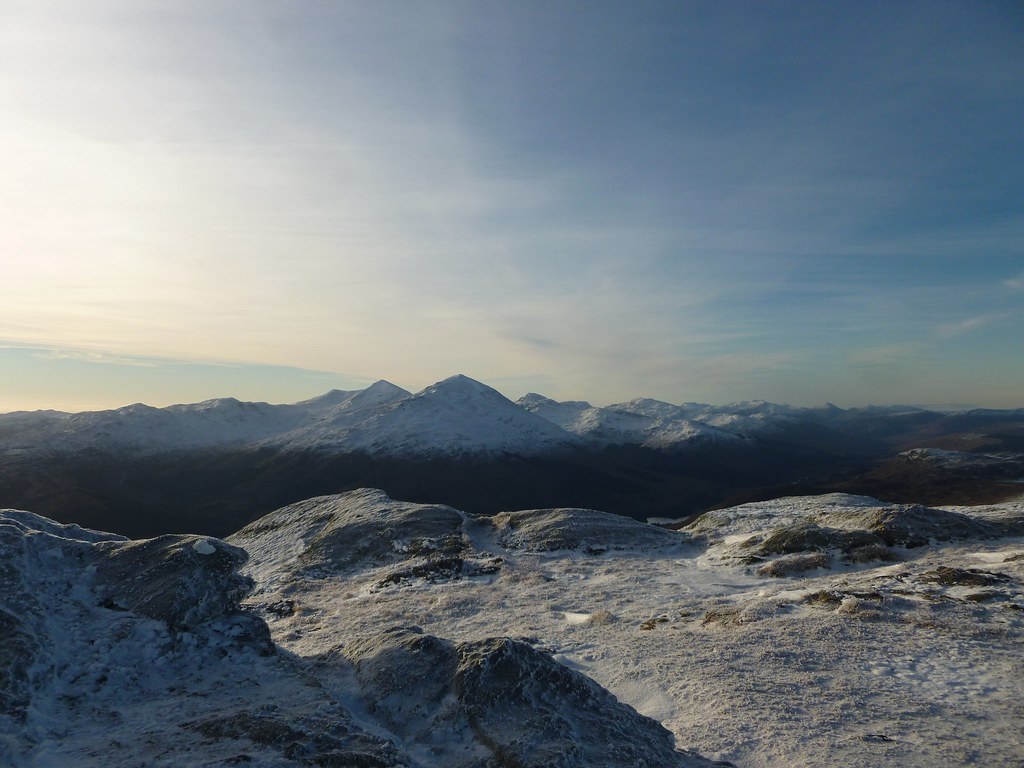 and the Lawers group 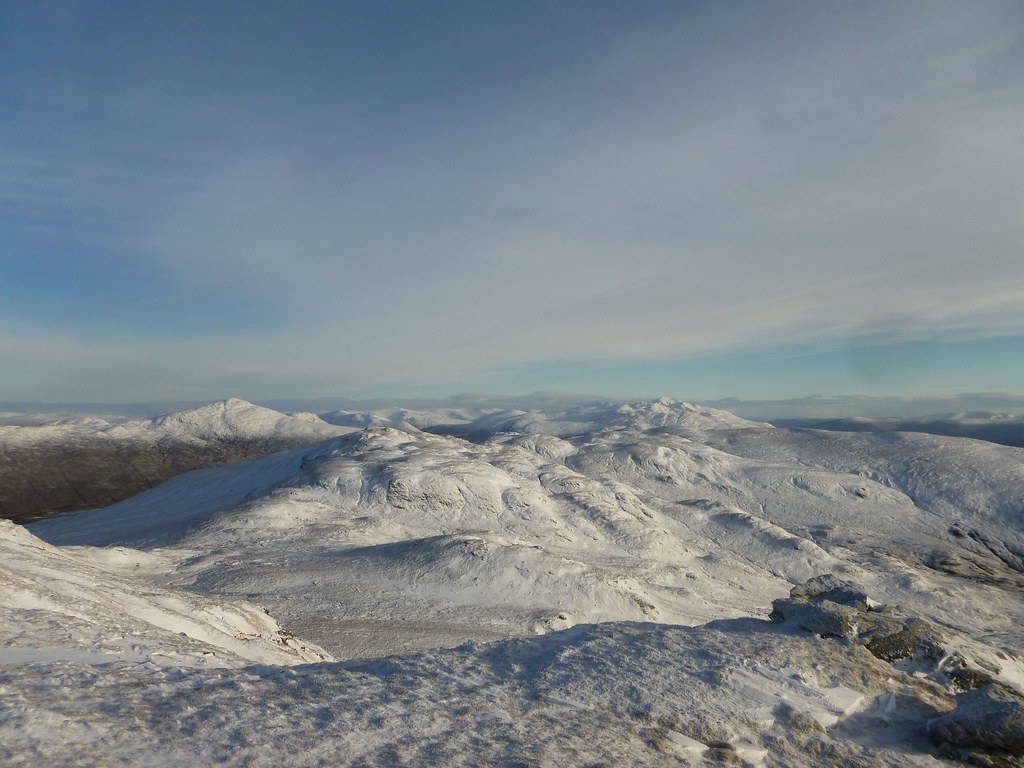 There was a faint path which we followed for a short distance before heading directly down hill. We couldn’t see the boulders we were aiming for as everything was white, so just went for it. The weather was still perfect so we could see our route anyway. It was very steep and we reckoned the snow actually made it easier – that descent on grass would have been hellish

Hard to believe we came down this: 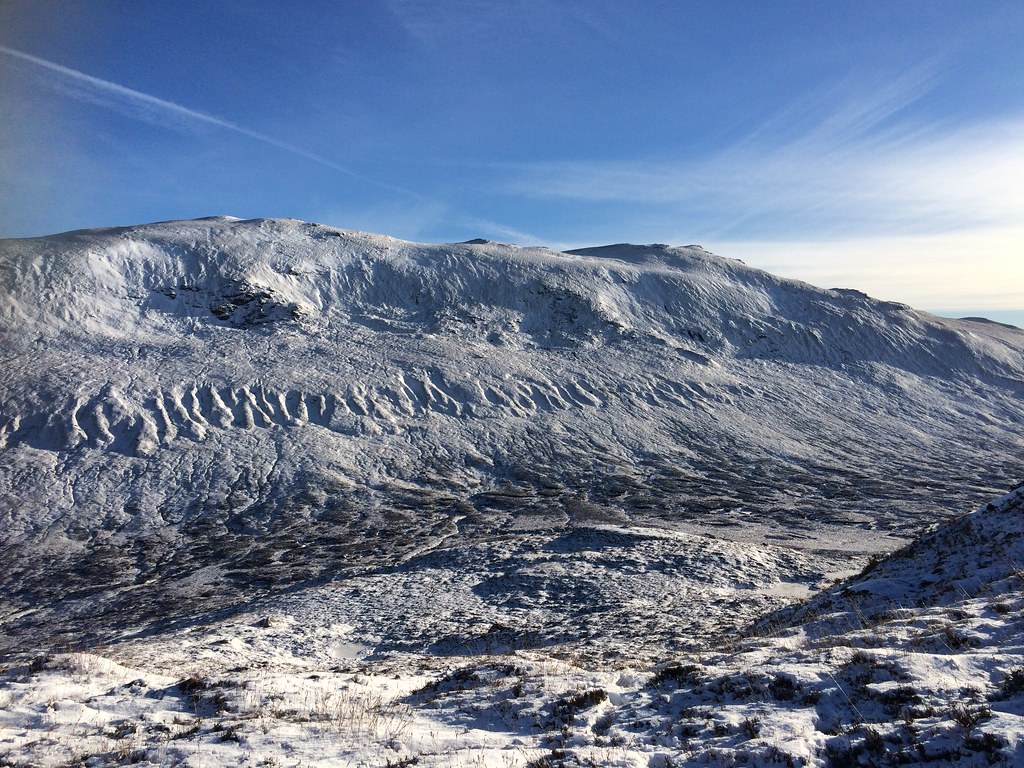 We had tried to head kind of diagonally up the steep slope ahead, but got bored and went straight up. This was fine until we arrived at a steep icy slope. Uh-oh… by this point it seemed easier to continue up than to attempt a traverse or descent, so out came the ice axe – nothing like a baptism of fire (or ice in this case!) It was actually SO much fun! Man was I tired by the time I reached the top but totally worth it for the sense of achievement 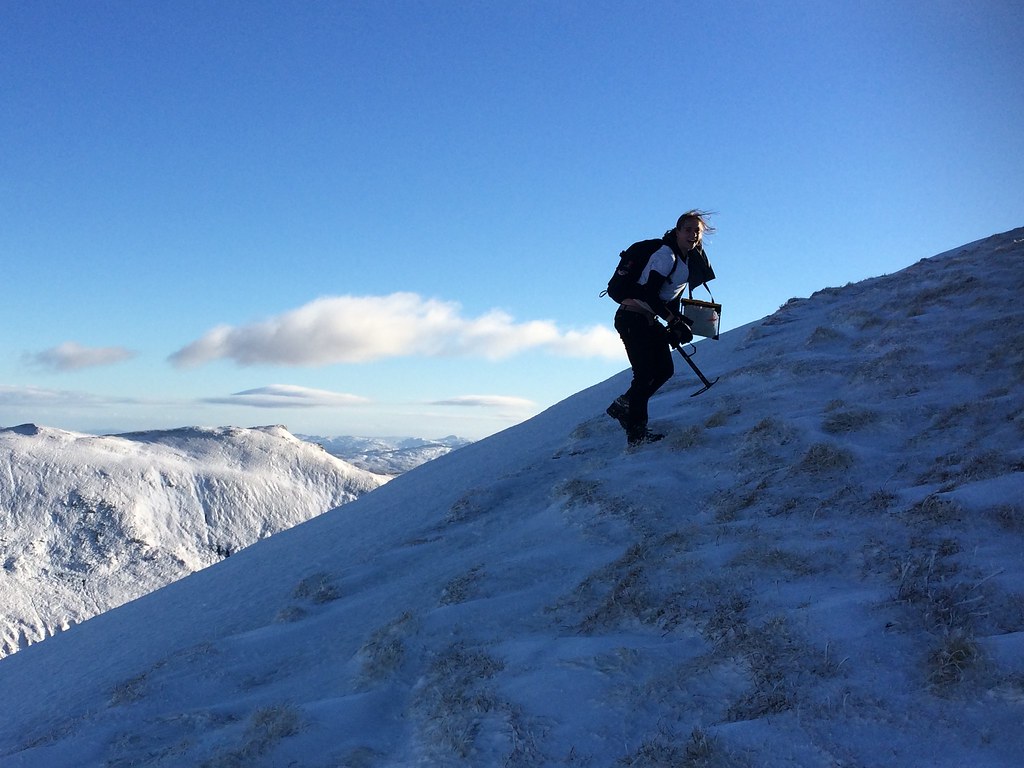 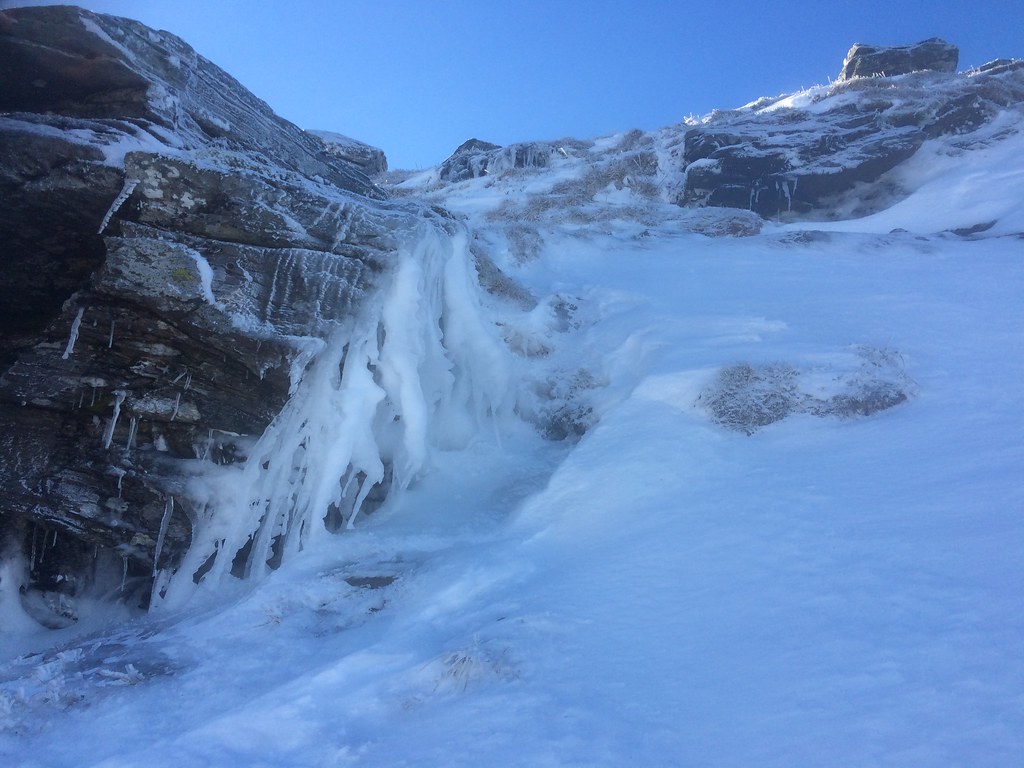 After a quick diversion to the trig point on Beinn Cheathaich we followed at first a faint path and then our noses to the top of Meall Glas. After meeting no-one so far, the summit here seemed like Piccadilly Circus! Lots of people out enjoying the perfect weather

The way we had come 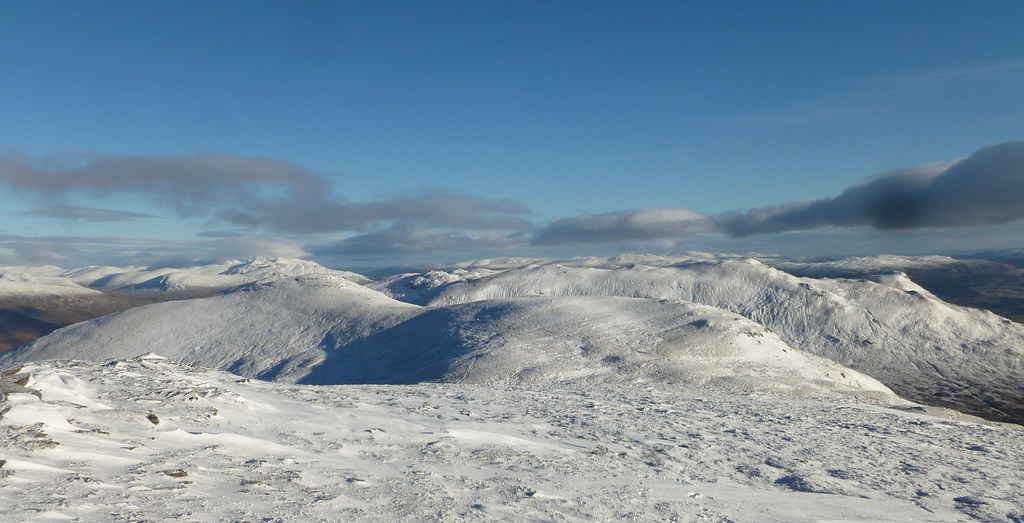 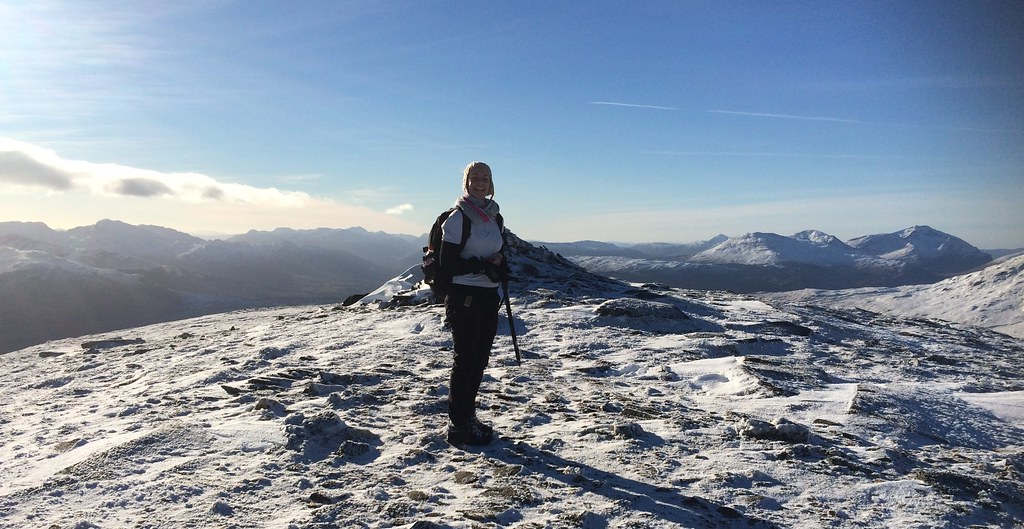 The views were still incredible 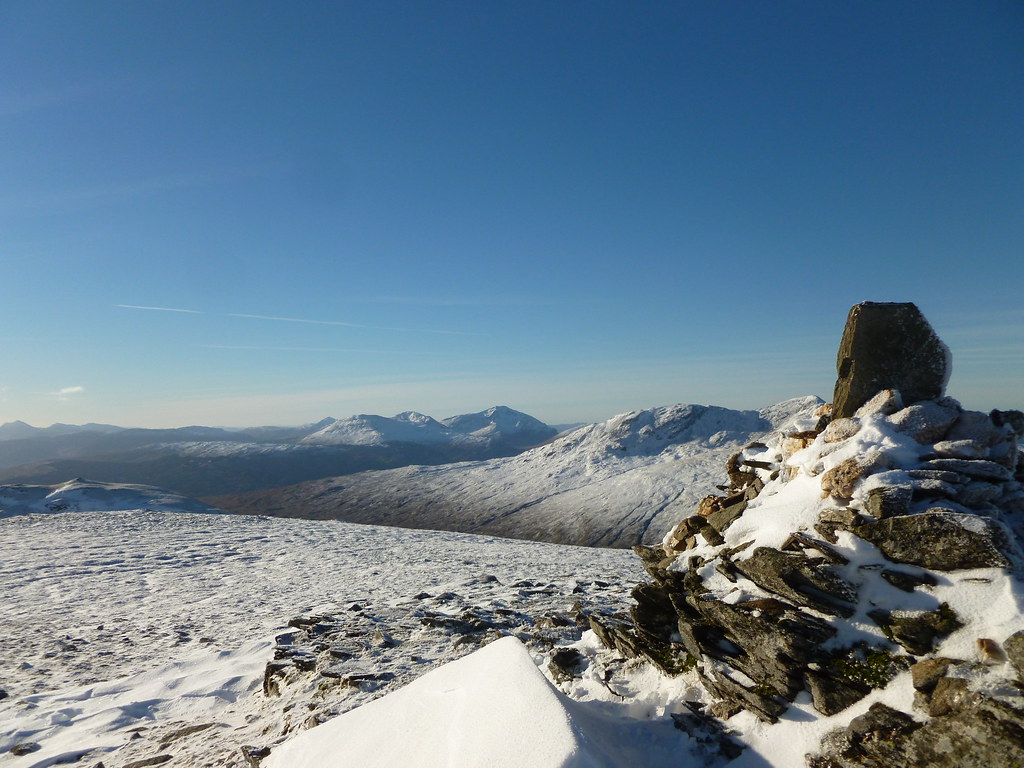 After posing for more photos we headed off down as it was very cold and windy again here. The steep decent was made a lot more fun by sliding down on my ass as the snow was deeper here. So much fun!! 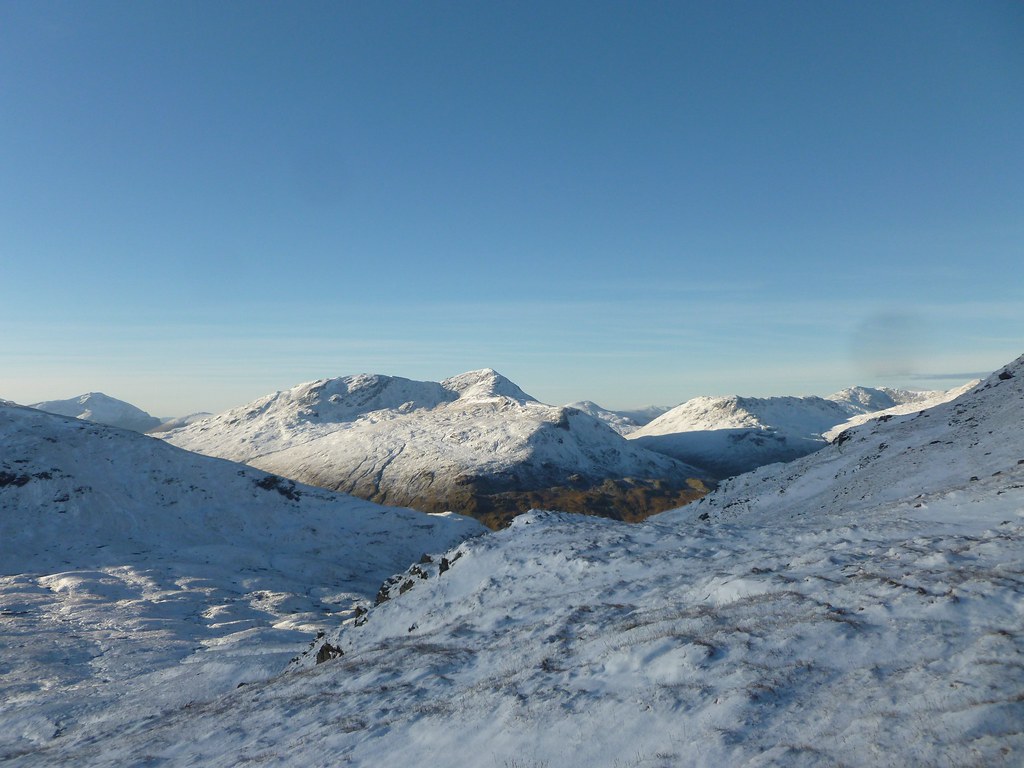 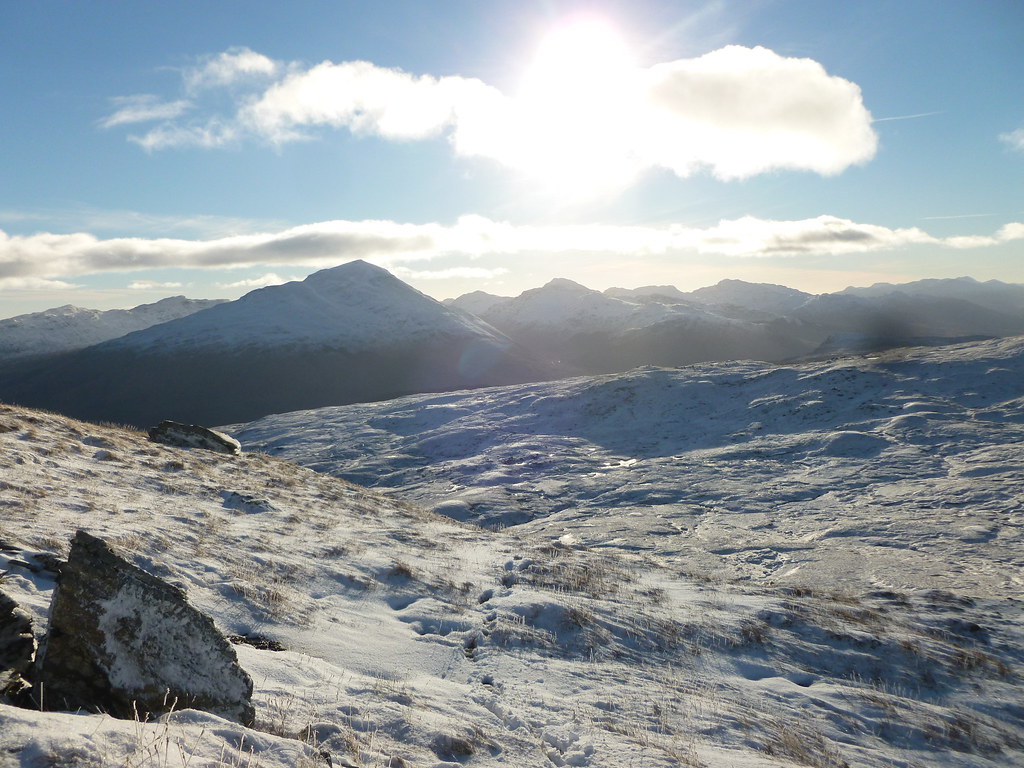 Back up to Meall Glas 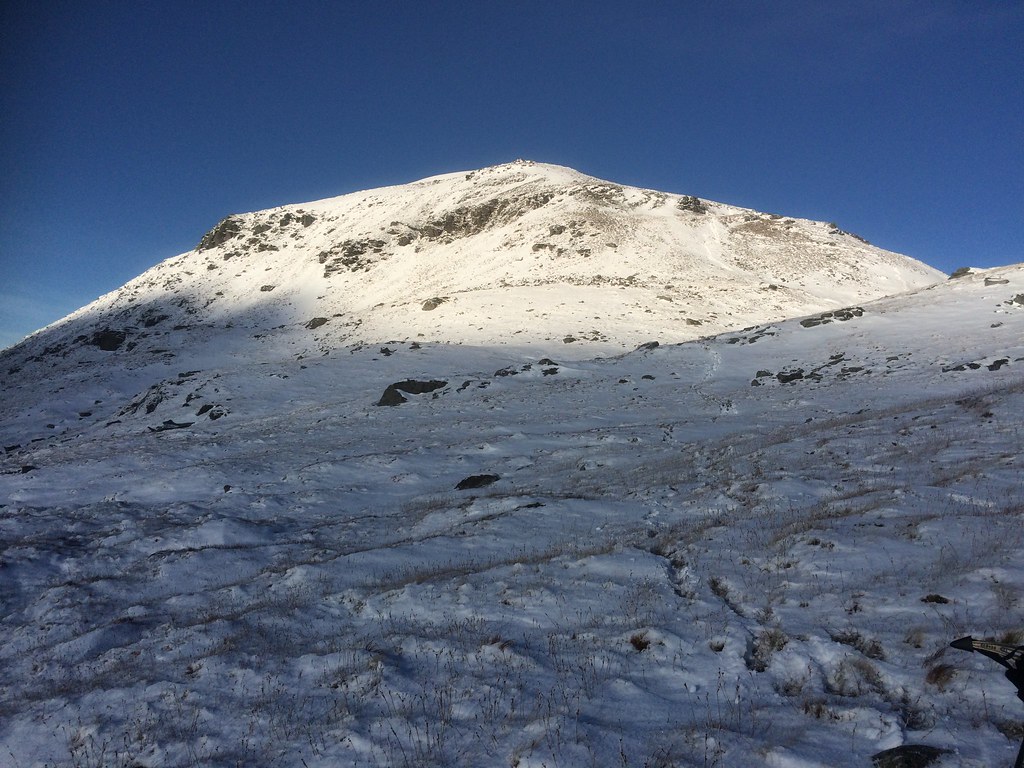 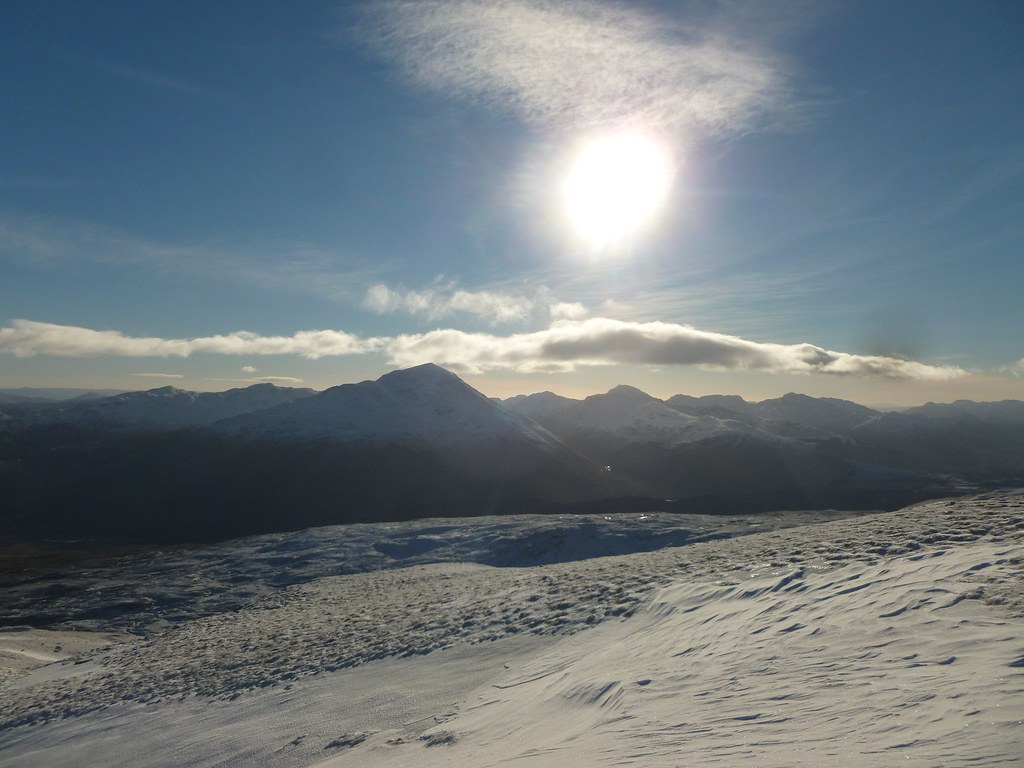 It took a while to pick up any sort of path here – turned out we had come off at too much of an angle, but eventually found the plantation and followed it down to the stile and through the woodland to the track which lead us back to the cars. 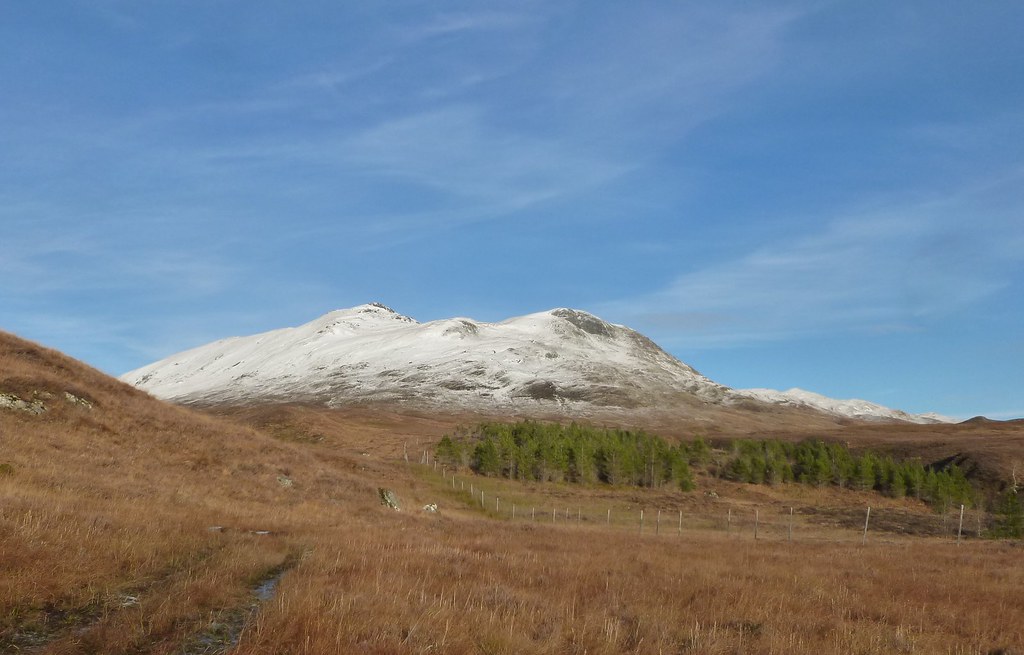 I had such a great day – perfect weather to do these two munros in I think! It was a beautiful drive back down the road 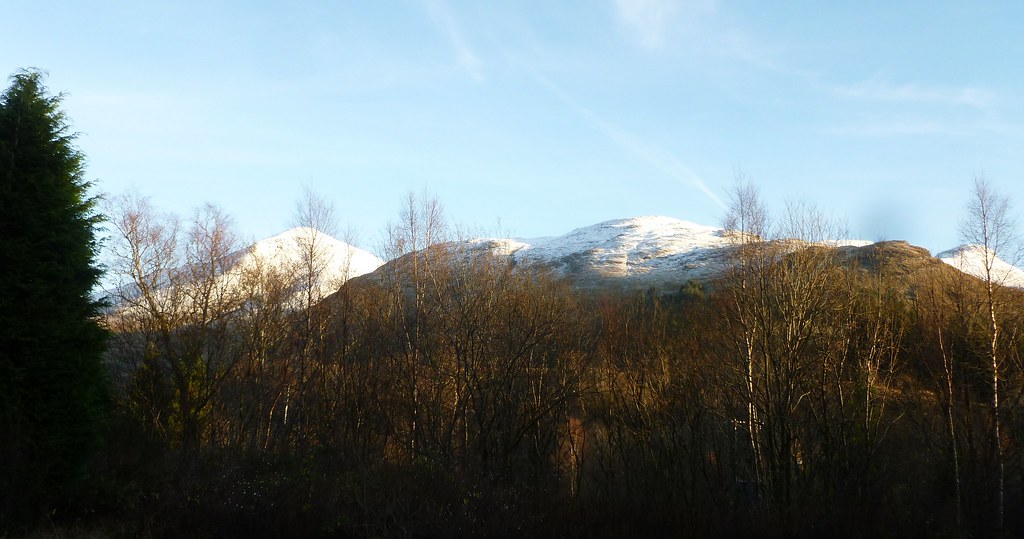 Looked a Braw day for it

I was well jel of the folk oot last Sunday!

Enjoyed that - what a beautiful day you got for it!

Hm, yes these hills are best attempted when completely frozen over! Really great pictures of a perfect day.

I to had a grand winter day ón this last Winter

Enjoyed seeing her in the white coat again

What a great day last Sunday was! You had the best kind of day for these two hills - I don't remember them at all because the weather was dull and damp when I was there, making them pretty unremarkable. Your photos make them look superb

I was on Beinn Each (Callander) that day and had a really good walk. The snow makes good views very special

Great report, and a lovely day.
Yep, I remember these being much wetter than this.

I made an attempt on Beinn Dearg, Ullapool, but got caught in a front which brought in the cloud and rain to 700 metres. Funny how quickly things can change.

Well done to you for seizing the moment.

Thanks folks - we were very lucky with the weather

Itching to get out again but forecast looks