Not quite the Load in our planned Pot of Hills.

Not quite the Load in our planned Pot of Hills.


After all the wind and rain we've had over recent days a fine forecast for Sunday 22nd was an opportunity to have a wander too hard to miss.
Looking at the map and with relative ease of access for us I decided on the six Wainwrights to the S.E of Ullswater, Hallin Fell, Steel Knotts, Wether Hill,Loadpot Hill, Bonscale Pike and Arthurs Pike, not a bad day if the weather behaved and with the days being shorter if would fit nicely into a six hour trip with light to spare.
It took us just over an hour and a half to arrive at St Peters Church just above Howtown, it was drizzling and the clouds were well down, just brushingthe top of Steel Knotts but leaving Hallin Fell free so we decided to have a quick shin up there first instead of at the end.
It didn't take long to get to the top, fifteen mins in fact, it must be the quickest Wainwright we've ever done but the views from the summit, on a clear day,must be great, they weren't so bad to-day especially along Ullswater and over in the direction of High Street, Fairfield, Helvellyn etc but all were capped in cloud so a future summer visit on a clear day is on the cards. Big Obelisk on the top of Hallin fell. Views from the summit. 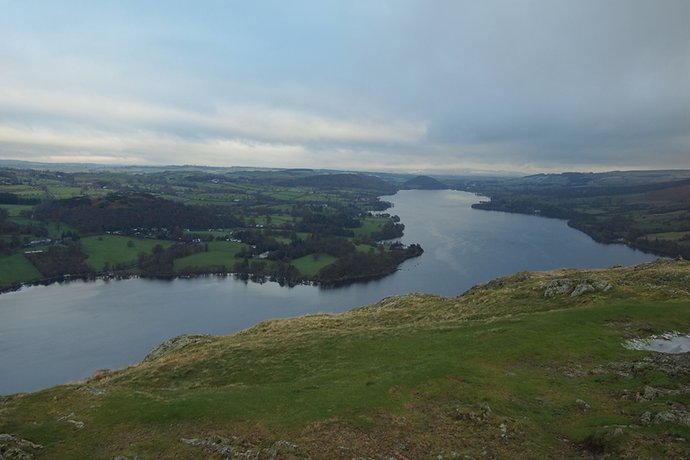 Towards Helvellyn and the Dodds Loadpot Hill in there somewhere. We shot back down to the car to pick up the rucksacs and then set off for Steel Knotts, it was jusssst clear of cloud but the remainder of our route was thick with mist, not the conditions forecast at all. looking back at the old Church just before the climb up towards Birkie Knott.

The walk up around Birkie Knott is steep and there is a path of sorts, easier to see when the bracken has died back a bit. Once up on the little ridge we touched the cairn on the false summit and headed towards the rocky tor which is Pikeawassa the summit of Steel Knotts. Here the rain started and the cloud kept blowing over on the brisk wind, all the route ahead was thick and looked pretty miserable so we beat a hasty retreat from the rocks and decided not to bother going on so we set off down reasonably happy with two in the bag. Where we're planning to go. Very shortly we met a couple on the way up, they were not happy about the weather but continued, we had a quick re-think and decided to give it a go and by now the rain had ceased so that made the decision easier.
The walk up to Wether Hill isn't at all bad but with a bit of snow on the ground we lost the sketchy path and once we walked into the mist I set a bearing which would eventually cross the motorway which is High Street. Even in mist and a sprinkling of snow it lives up to its name and once on it the walk to Wether Hill is straight forward and we arrived at its tiny cairn not seeing a thing and being battered a bit by the wind. Here we decided to go onto Loadpot Hill in the hope we'd get a view, well you never know........ after all, it did seem to be brightening a bit, then go down, we'd spent too much time sodding about and time was cracking on and I didn't fancy rushing.
We arrived at the trig point still in the mist, that put the thought of going onto Arthurs Pike to bed finally. 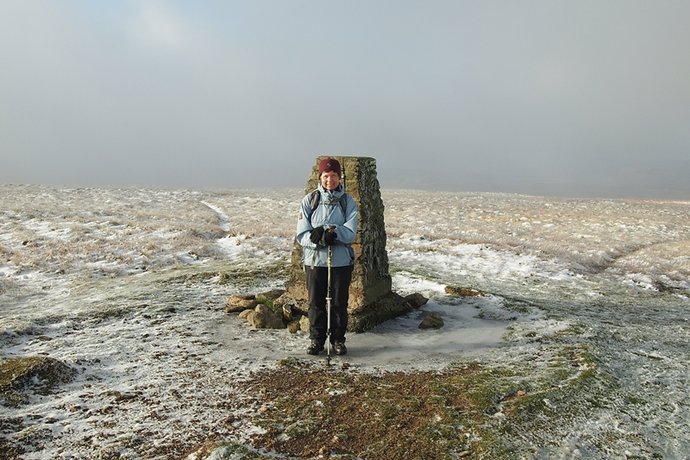 Loadpot Hill And Trig, we decided to bin it here and go down.

We had a bite to eat and took a couple of piccys and then set off back the way we came and then shot off down hill at around NY456174 and followed Groove Gill down to the path. Just as we set off down, we saw this......... Cloud giving up what it's been hiding. ditto again, suprising how the snow highlightes the mountains. Towards the Pennines. Now the weather is changing.

Once on the path it was a simple march back towards Howtown, around NY444194 the path joins with the bridleway coming from Martindale and here we turned left and headed along it back to the church.
We were out for a little over five hours, not too bad considering the faffing around we did wondering whether to carry on into the mist, my problem is that when the hard work getting to the top of hills and mountains is over with I like to see things to make the effort worthwhile, we didn't get many views today but on the way back to the car we had this lovely view of Ullswater. 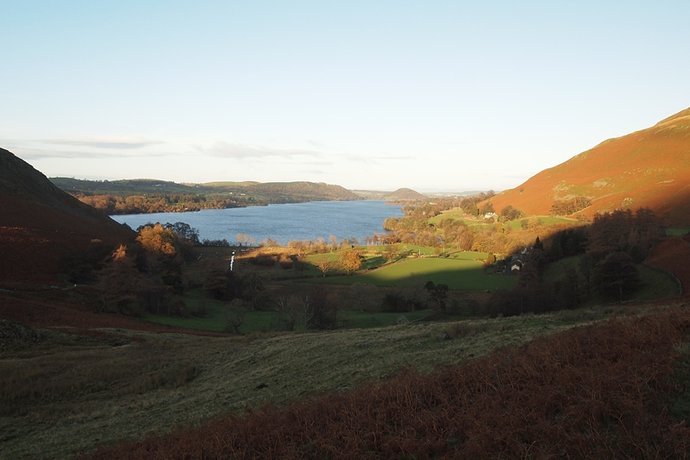 Ullswater in the afternoon sun. Hard to believe, but it is the same day. Lowering sun from the carpark

We'll have to go back for Arthurs Pike and Bonscale Pike but what we did was better than nothing it was originally going to be two and turned out to be four out of six but we got some fresh air and time in the hills which is better than wallpapering which is what we were doing yesterday.

Very interesting, thanks! Particularly as I'm going up there tomorrow, hoping to do those exact Fells. I'll probably do what you did and try Hallin first as the forecast is pretty dismal. I can well understand your deliberations on whether to go on or not ('wether'!).

and well done for sticking it out

. You're right about the views from Hallin Fell when it's a clear day. They're amazing for such a little fell

Good stuff Martin, as you say....beats the hell out of wallpapering

my problem is that when the hard work getting to the top of hills and mountains is over with I like to see things to make the effort worthwhile,