Sgurr Mhaoraich, Gleouraich, Spidean Mialach .gpx Open full screen  NB: Walkhighlands is not responsible for the accuracy of gpx files in users posts
These hills had been planned for day 3 of my curtailed trek around Loch Quoich. But according to the forecast, I would have much better weather today than when I had originally intended to do them. You lose some, you win some!

I parked just after the bridge and started along the tarmac road, counting pylons as I went along. Indeed in between the 3rd and 4th pylon a path heads up the hill side, a very good path for that matter. This made the ascent easy and in no time I was on the ridge of Bac nan Canaichean. The views of Loch Quoich were great. Gairich had its head in the cloud and it seemed like some kind of inversion was going on! 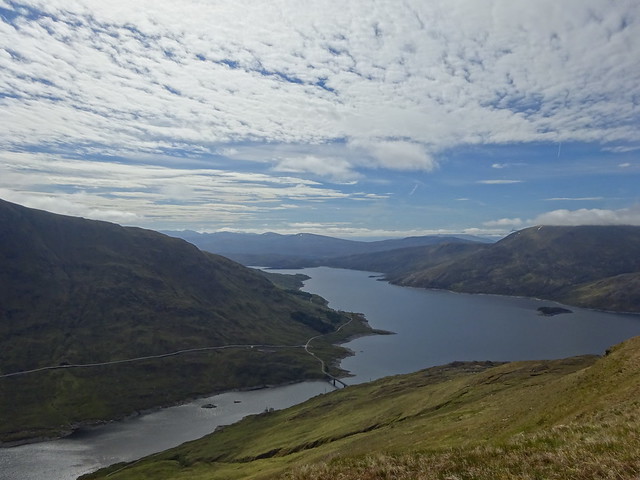 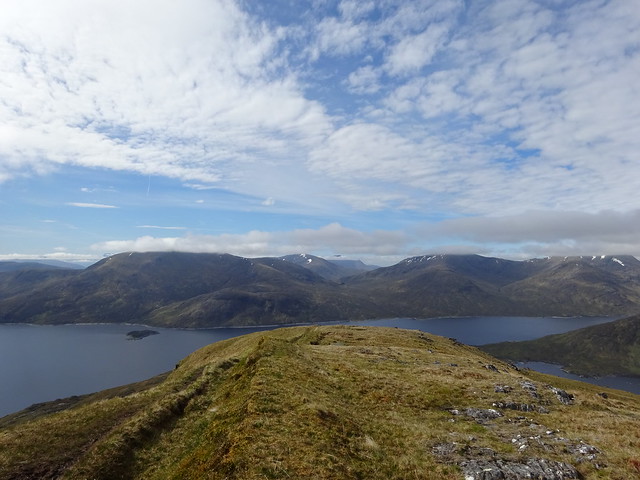 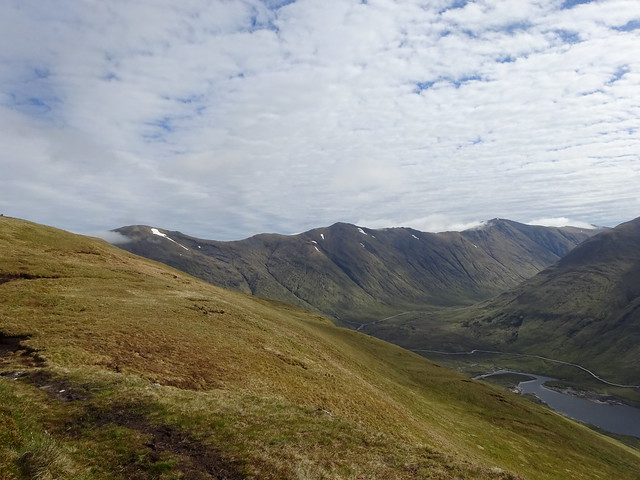 Just below Sgurr Coire nan Eiricheallach I caught up with a couple and a dog and we walked together for a while whilst chatting. They stopped for a break on Sgurr Coire nan Eiricheallach and I continued on my way. Below Sgurr Mhaoraich the path leads on to the left of the ridge along a ledge. There was a snow field to be negotiated , which was a bit tricky as the slope was steep and a slip would result in a not so soft encounter with some big rocks lower down on the left.

After this the next challenge was finding a way up the steep and rocky summit ridge. The path was again covered in snow so care was needed. The path led to the snow filled NE corrie and it was obvious that this was not the way to go. So there was nothing for it but a scramble up the rock. Once up it was an easy walk to the summit, where OMG there indeed was a partial inversion! My first ever! The cloud was quite high and clearing the tops quickly, but it still was a great sight! 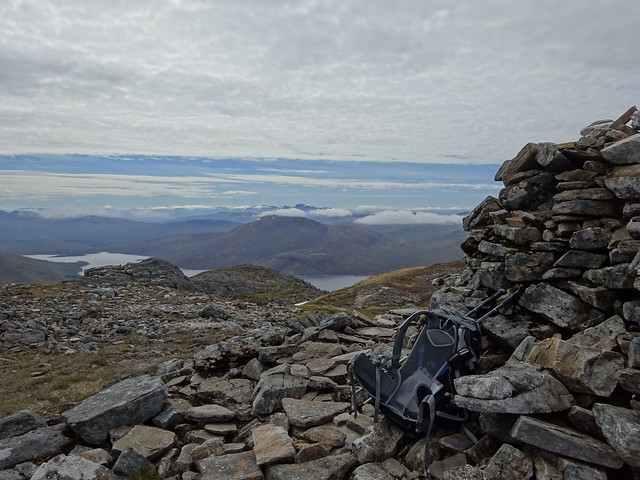 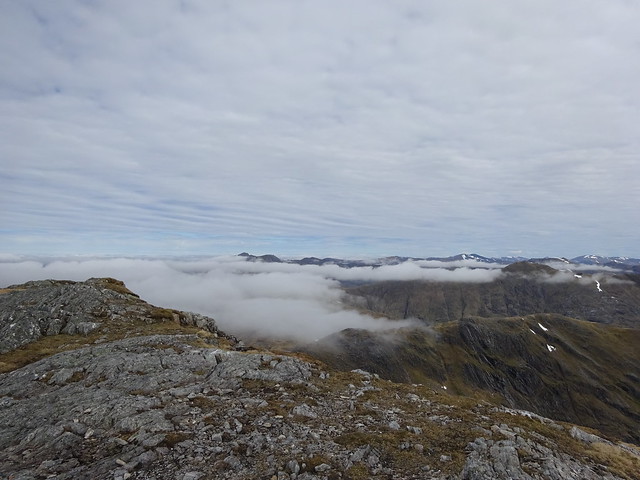 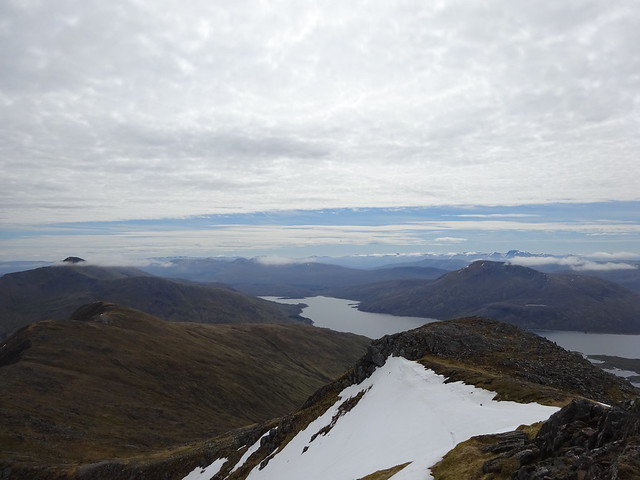 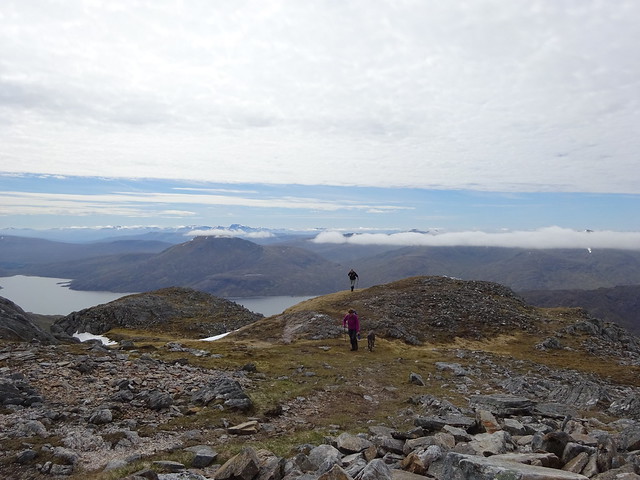 The view south towards Gairich and the Glen Kingie hills

After I’d gone mad with the camera, the couple and their dog arrived at the summit. I took their picture and we had another chat whilst munching lunch. I then retraced my steps back to the road. 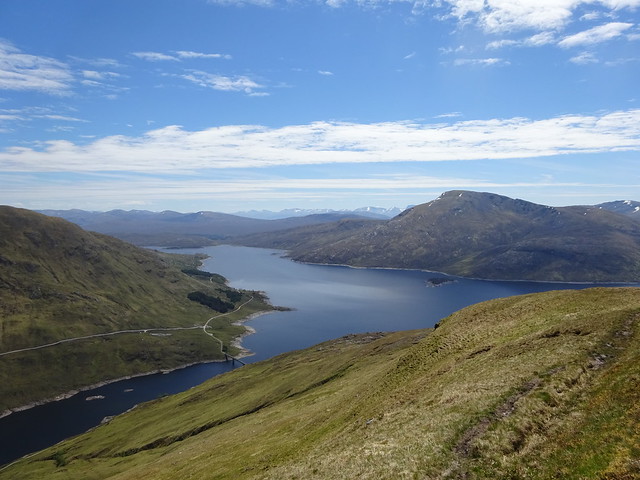 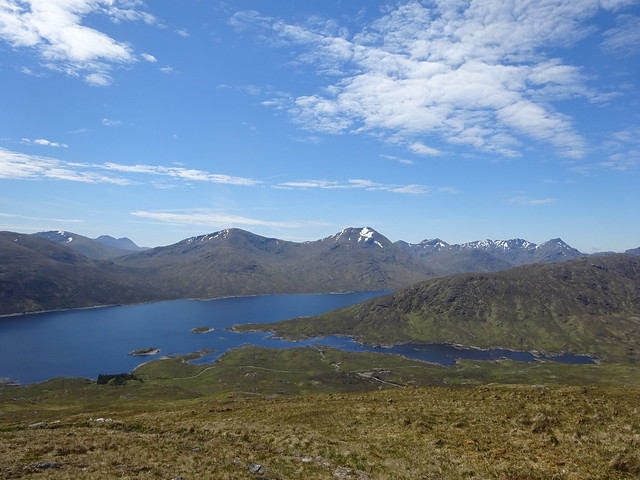 Some highland cows were enjoying a very leisurely stroll in the glen. I didn’t fancy overtaking them. Those horns were best kept ahead of me where I could see them. 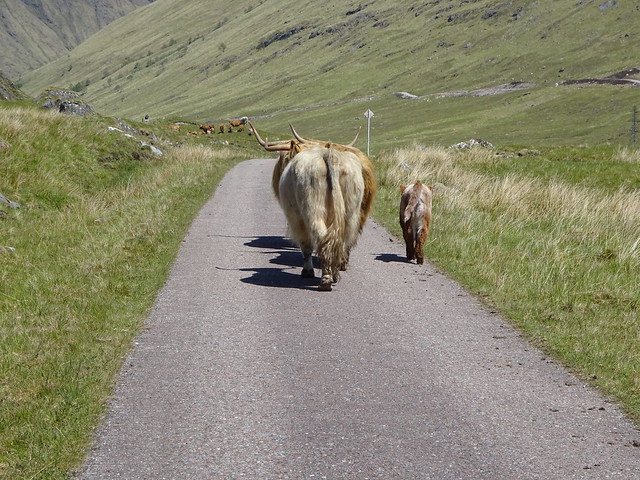 I’m not going to argue with you!

Back at the car I drove the short distance to the start of the stalkers path up Gleouraich.
The stalkers path really is superb. As soon as I was high enough above the small wood for the views to open up, I stopped to take pictures of Loch Quoich and that continued all the way up. 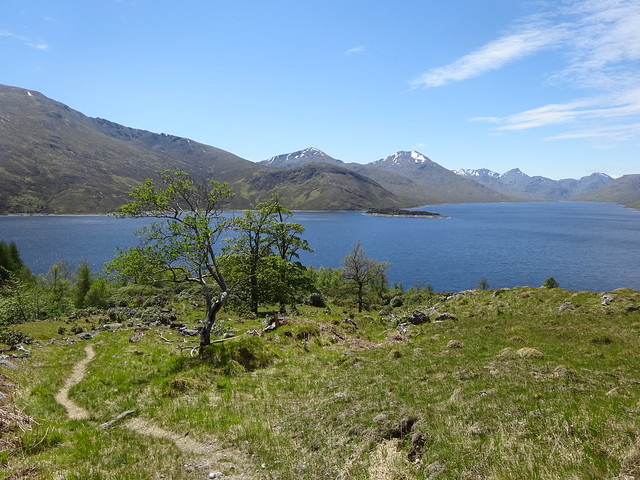 Loch Quoich and pointy Sgurr na Ciche at the far back

The SW ridge of Gleouraich was brilliant: narrow, good views, good path. And the weather was fantastic. Blue sky, no haze, bright sunshine. What a great place to be. 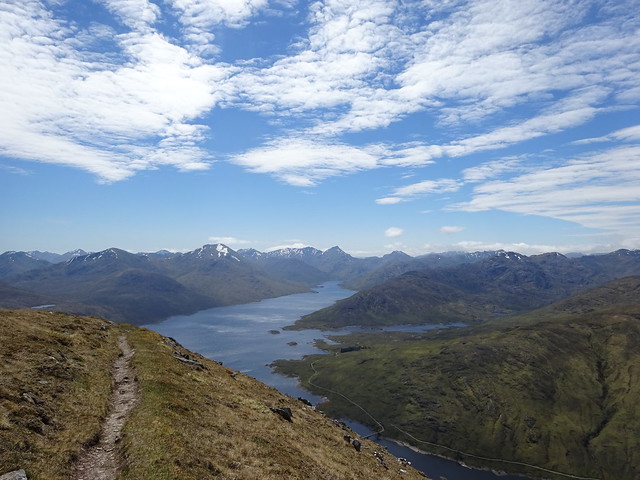 The legs were starting to tire on the steep ascent to the summit ridge, and it was very tempting to have a short rest at the wee wall, but the prospect of even better views spurred me on. 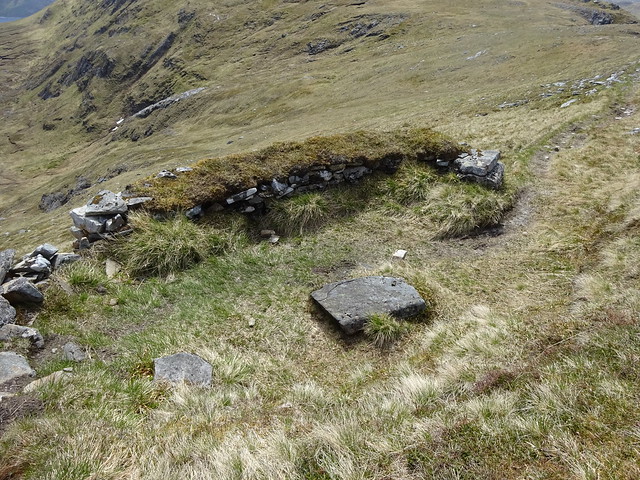 The views from the summit were truly wonderful in all directions: Spidean Mialach. Loch Quoich, Sgurr Mhaoraich, the south Glen Shiel ridge, Ben Nevis and even as far as Skye. The Cuillins poked their heads just above the cloud.

I wished I could stay here forever. 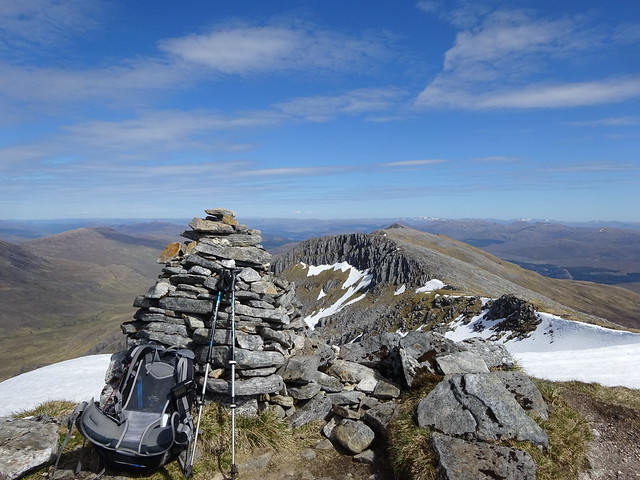 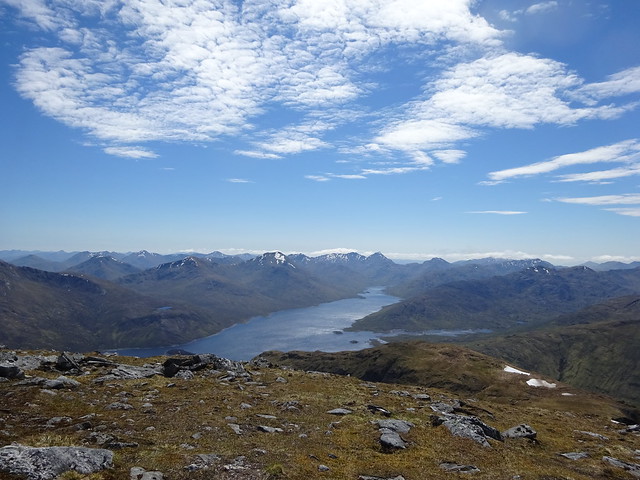 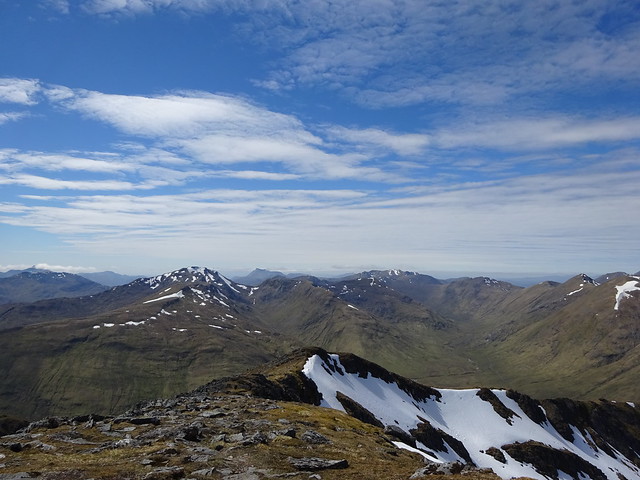 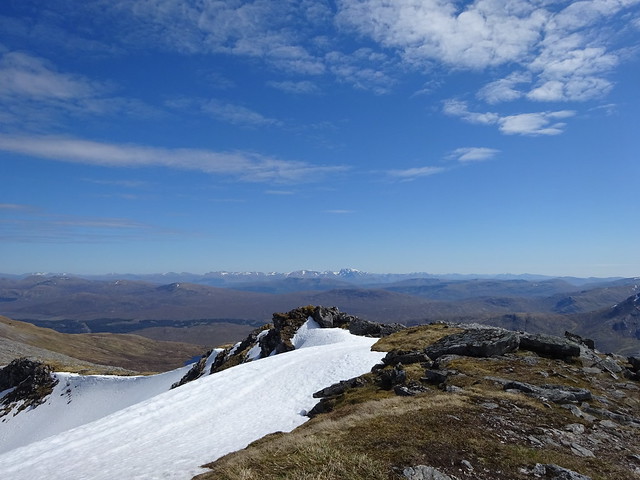 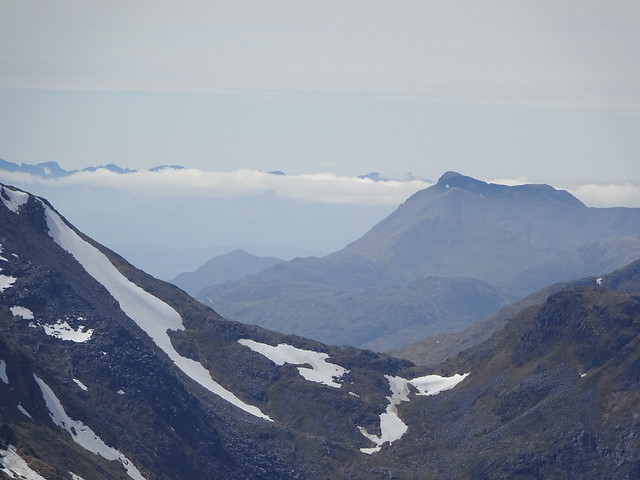 The Cuillin just above the cloud

After a rest and refuel it was time for the descent ridge, which was fantastic with great views into the northern corries. From the 1006 top it got quite rocky. Care was needed on the sections that were still wet from the snow melt. From here I had a good view of the boggy peat mess of Coire Dubh.
Both Gleouraich and Spidean Mialach are two-faced hills: rounded on the south and very wild on the north side. 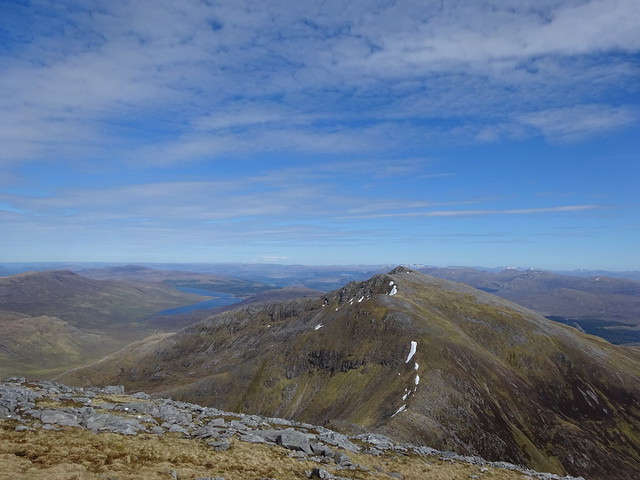 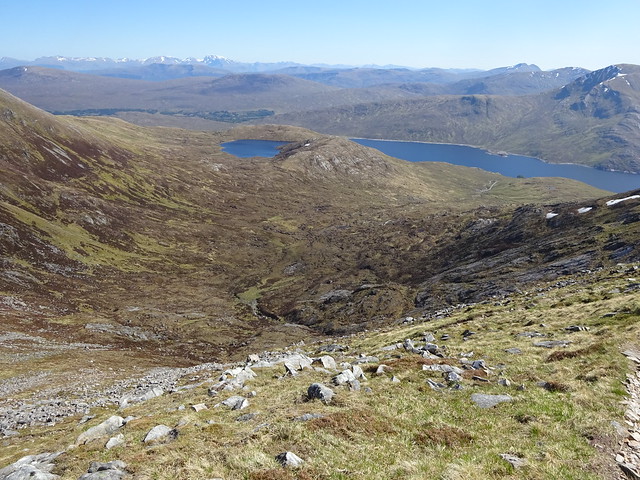 The descent path is somewhere in there 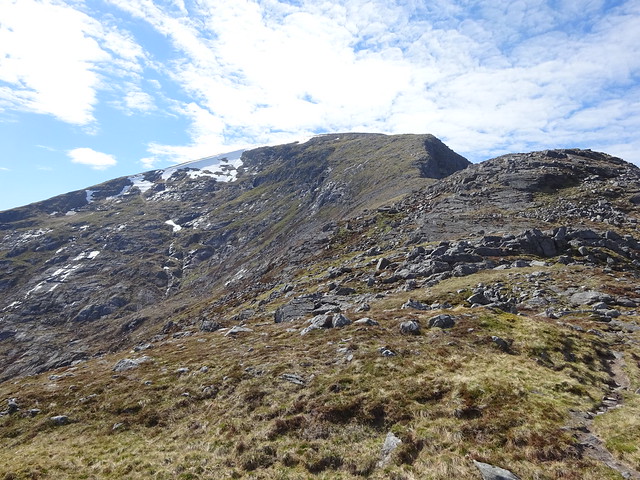 The views from the summit of Spidean Mialach were again stunning. 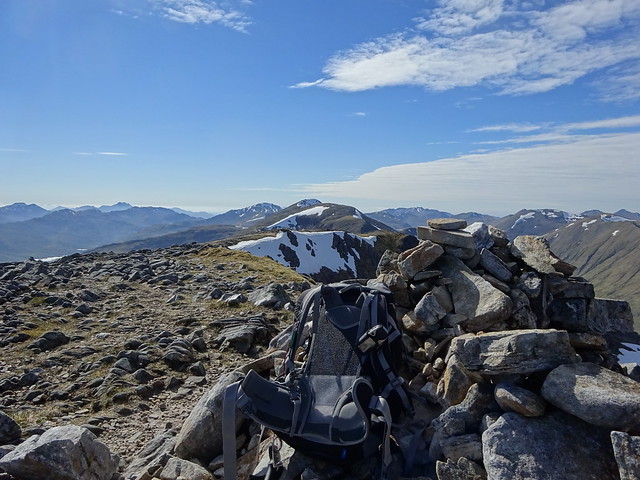 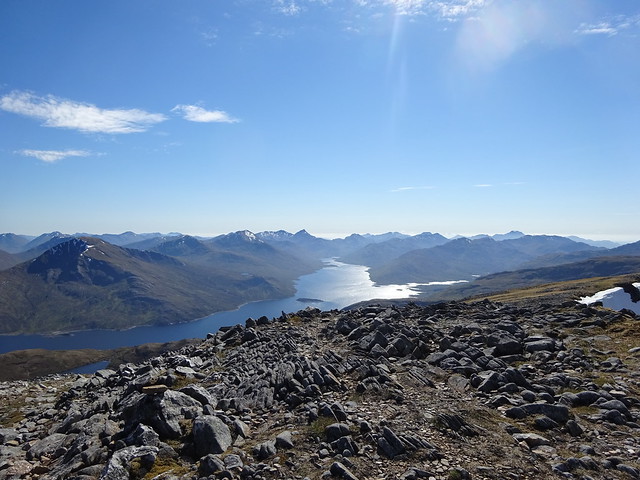 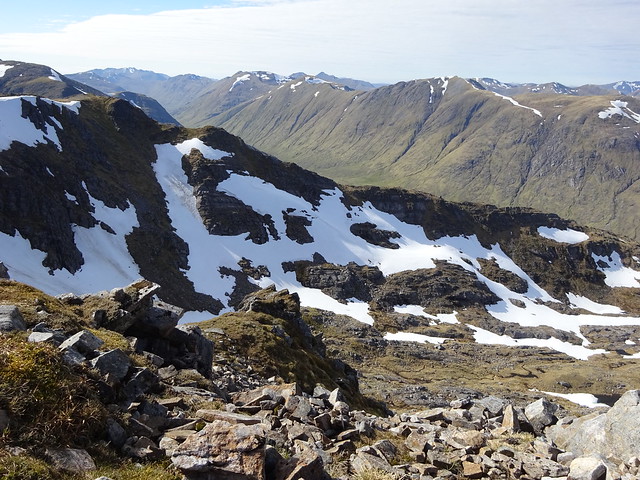 A look into the corrie

After a few pictures I started on the descent. This was steep and lower down boggy. The path was intermittent but it improved greatly once across the Allt a’ Mheil, making for an easy walk back to the car. 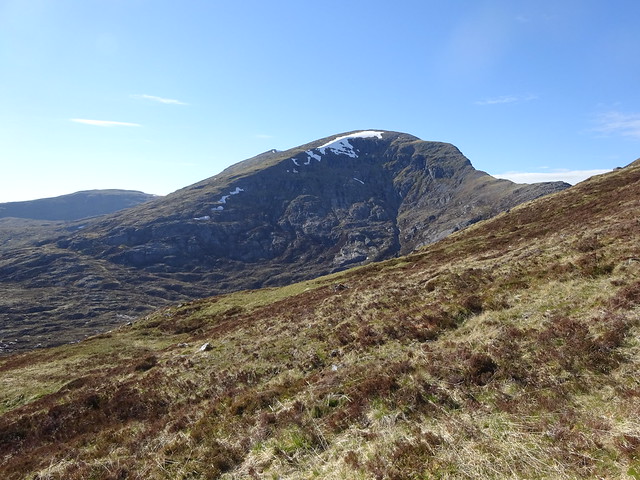 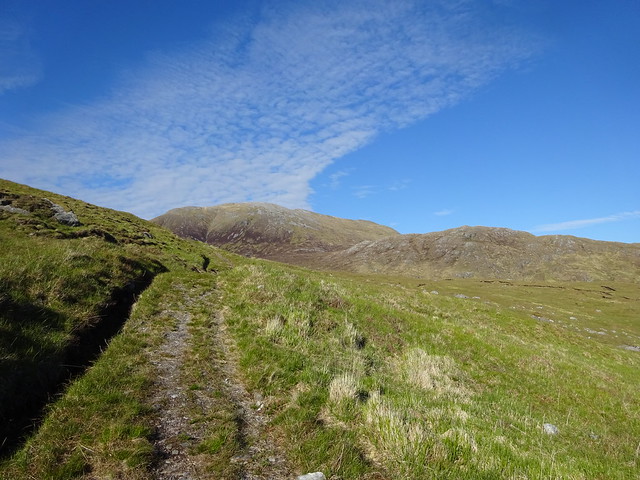 Wow, what a superb day! 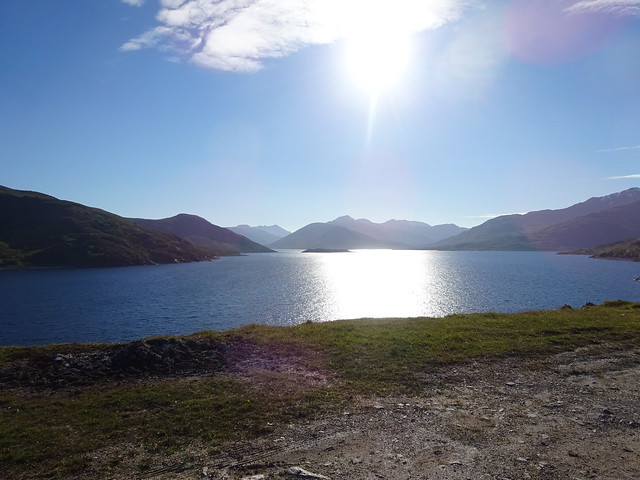 Last look over Loch Quoich from the car park

That looks like a pretty spectacular day. Not been round this area much but it whets my appetite. Cheers.

Thanks Bob, it was!

These are awesome hills for the views. Not much scrambling involved the way I went, but I’m sure you’ll find some interesting ways up.

You certainly pack a lot in to June every year Silverhill.

This really looked good, it's not a part of the country I've walked in but I certainly fancy it now - great photos of a memorable day (a bit different from what's coming my way tomorrow!!).

Gordie12 wrote:You certainly pack a lot in to June every year Silverhill.
This really looked good, it's not a part of the country I've walked in but I certainly fancy it now - great photos of a
memorable day (a bit different from what's coming my way tomorrow!!).

That’s why it takes me so long to write the trip reports!

These hills are really worth saving for a nice day. Yes a lot of wind is forecast here too. It will make the cycle ride to work interesting.