After almost 4 weeks weather forecast watching a window of opportunity appeared and it was my queue to hit the road.
Having watched it rain for the best part of 4 weeks I knew wherever I headed it was bound to be wet underfoot, I decided to downsize and tackle a Corbett

I still have a few in the Borders to visit and the Hart Fell route sounded perfect. The forecast deteriorated and rain was forecast by midday, so I decided on yet another early start

One major spanner in the plan was the Forth Road Bridge, the recent discovery of a structural problem with the bridge is causing major congestion for anyone crossing the Forth. I left home at 6.10am and it took me 40mins to get out of Inverkeithing and across the bridge, I can cycle across the bridge and be back at home in that time

Commuters have my sympathy 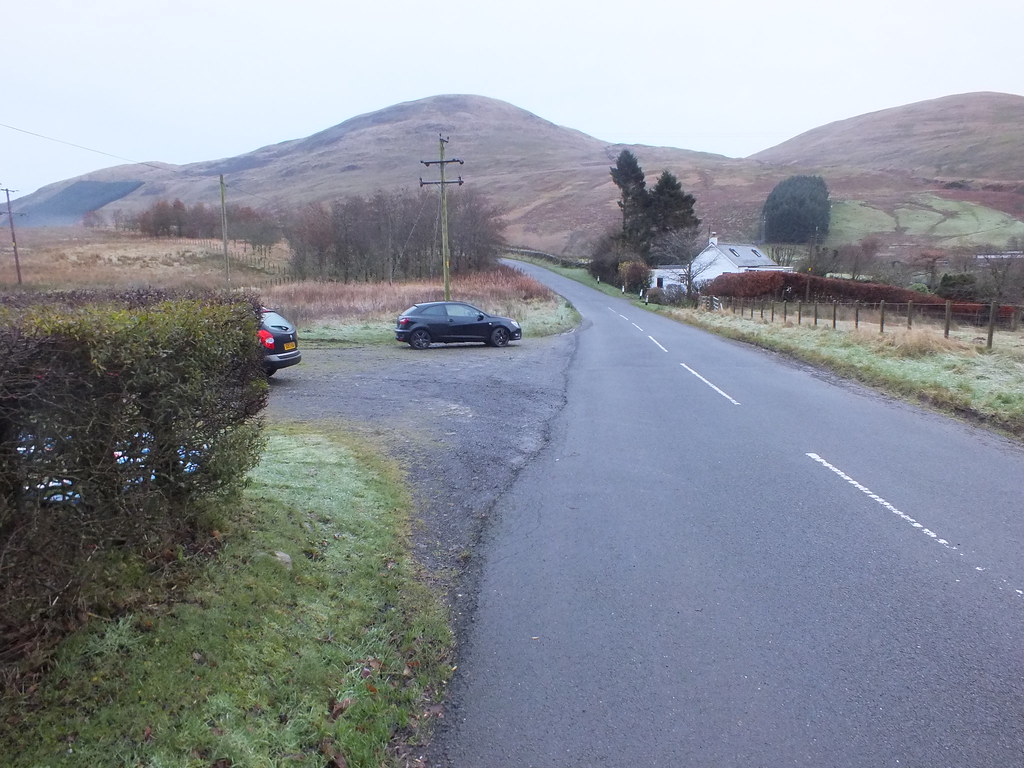 I was planning to follow the WH route so started off by walking back along the road, before going through a gate and wading through a large muddy patch, kind of what I was expecting after the recent weather

Once off the road it wasn't long before the ascent started and what an ascent, apart from being steep it was on very damp grass, looking on the bright side I was glad I was going up rather than coming down 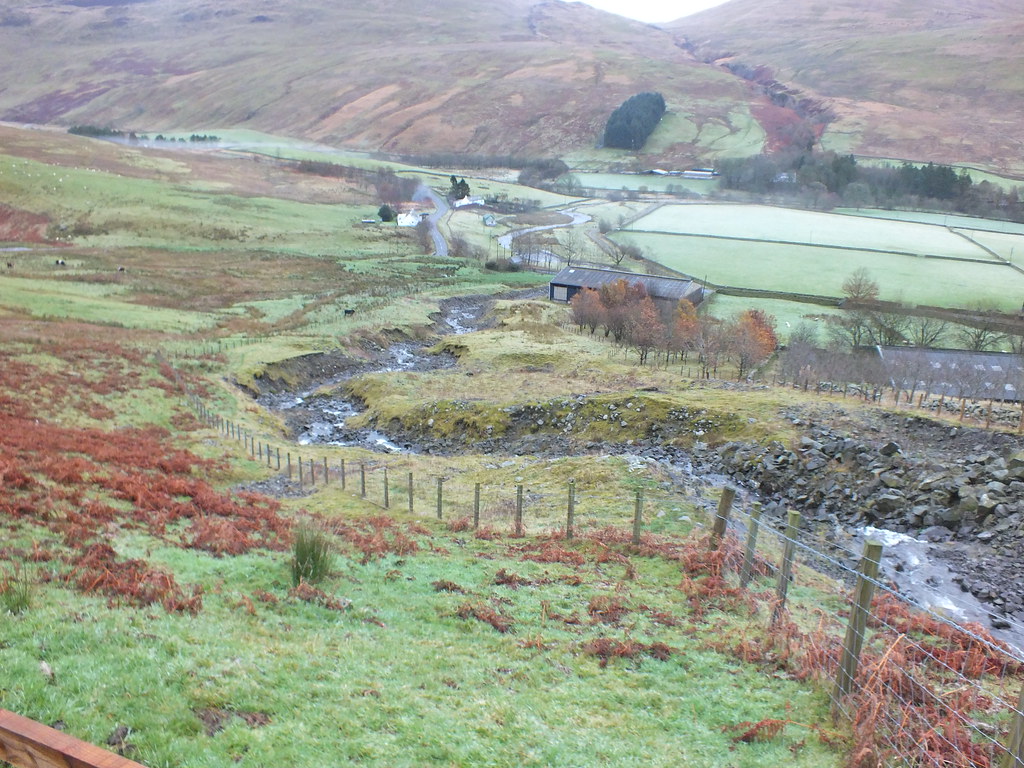 Looking back early on 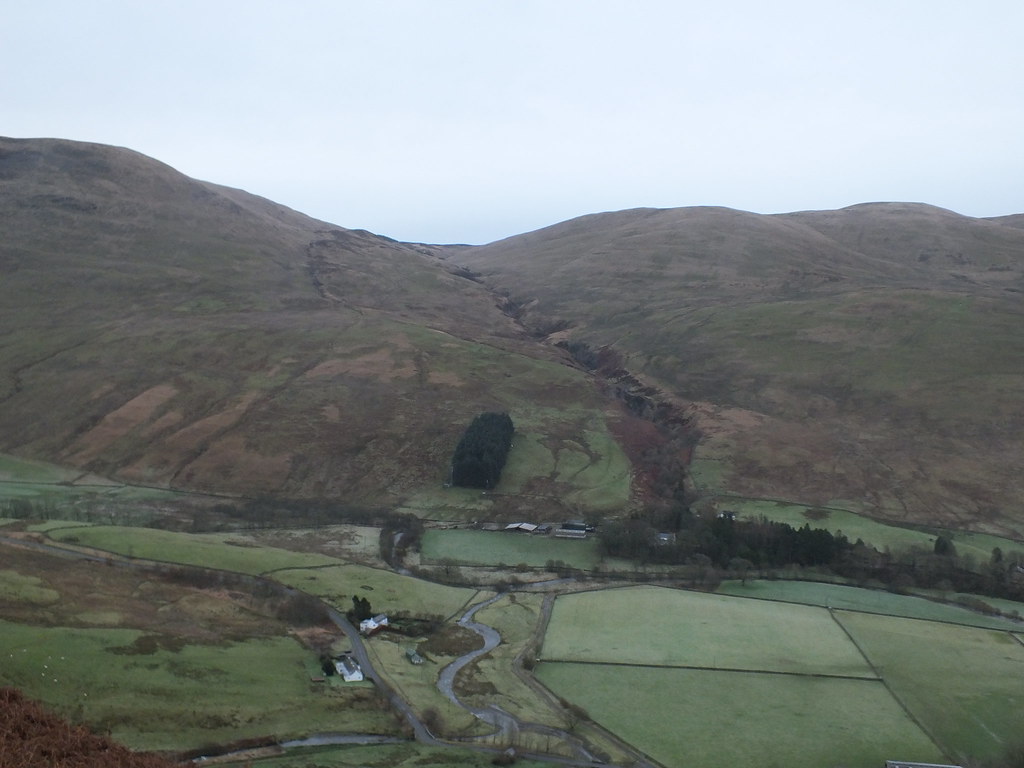 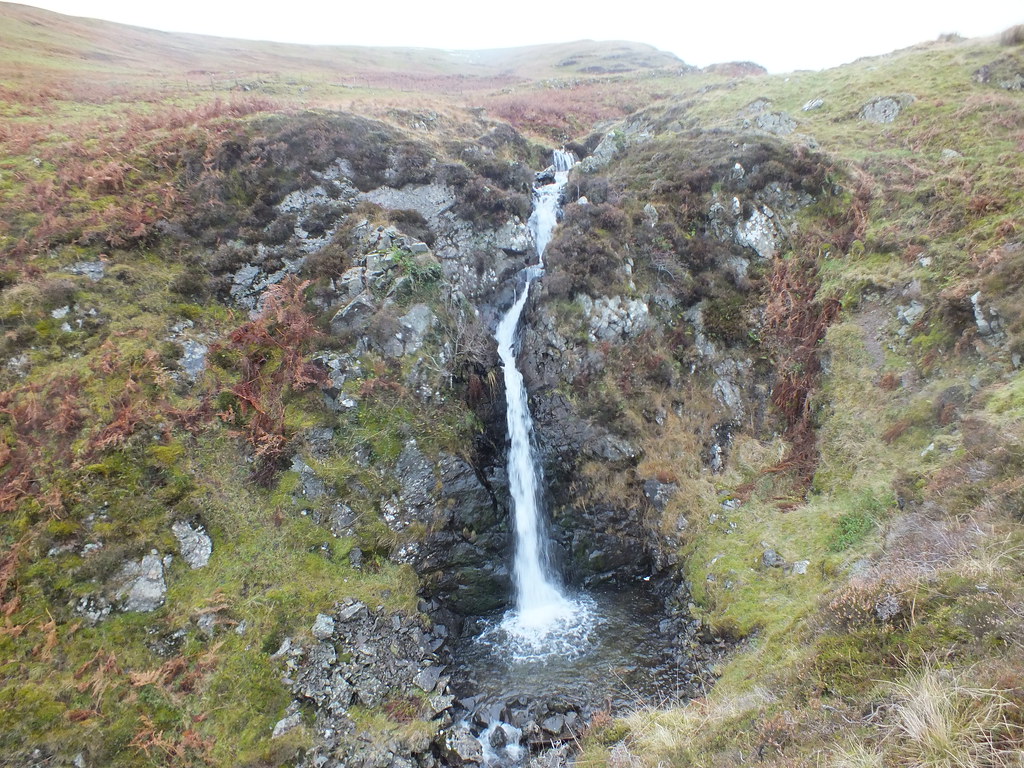 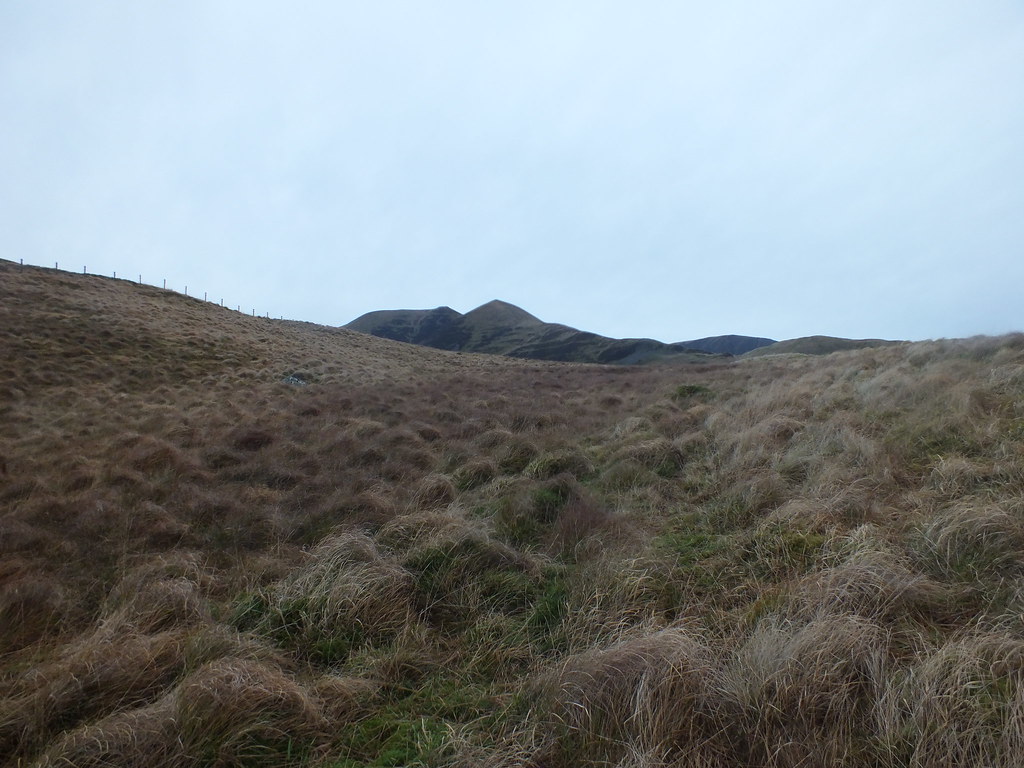 Looking across to a later hill, note the tufty grass

The WH route description warns of an obstacle, an electric fence to climb over. I spotted an old gate further up the hillside so rather clamber over a fence, I headed uphill 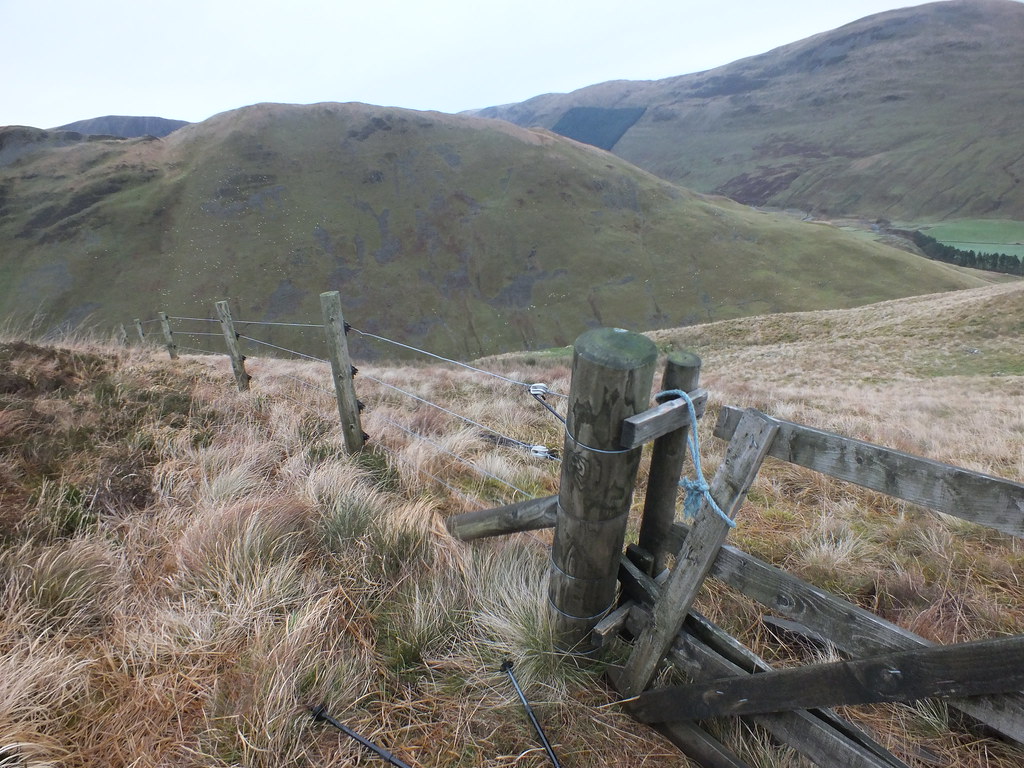 The rickety gate, opted to climb over rather than open it 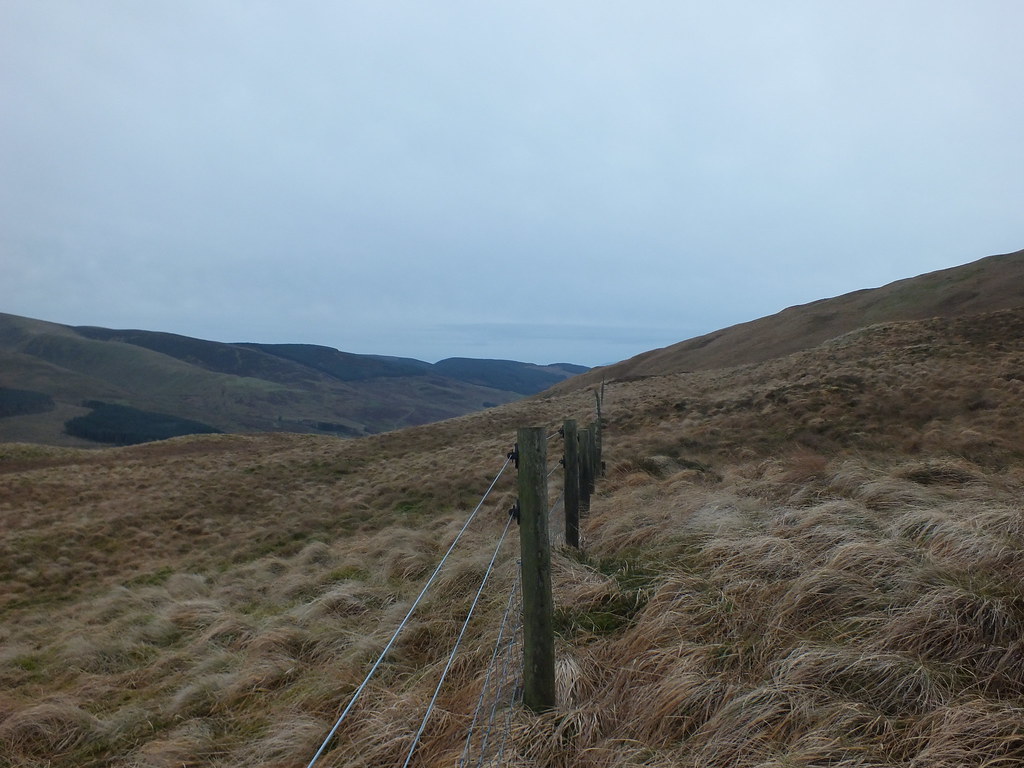 Looking down the electric fence

The path or should I say lack of path meant I was navigating visually and using my phone, the WH advice is to follow the fence if the conditions aren't very good. The fence takes you to the summit of Hart Fell, albeit if you follow it, not in a direct way. Once the higher ground is reached I was able to make much better progress and the views were amazing

On the ascent I could hear plenty of aeroplanes in the area so I was scanning looking in all directions and then spotted a Hercules (C130) below me. I know from my days in the Air Force that when C130's are flying low level, there are usually 3 planes spaced out by a couple of minutes. This time there were only 2, Defence cuts 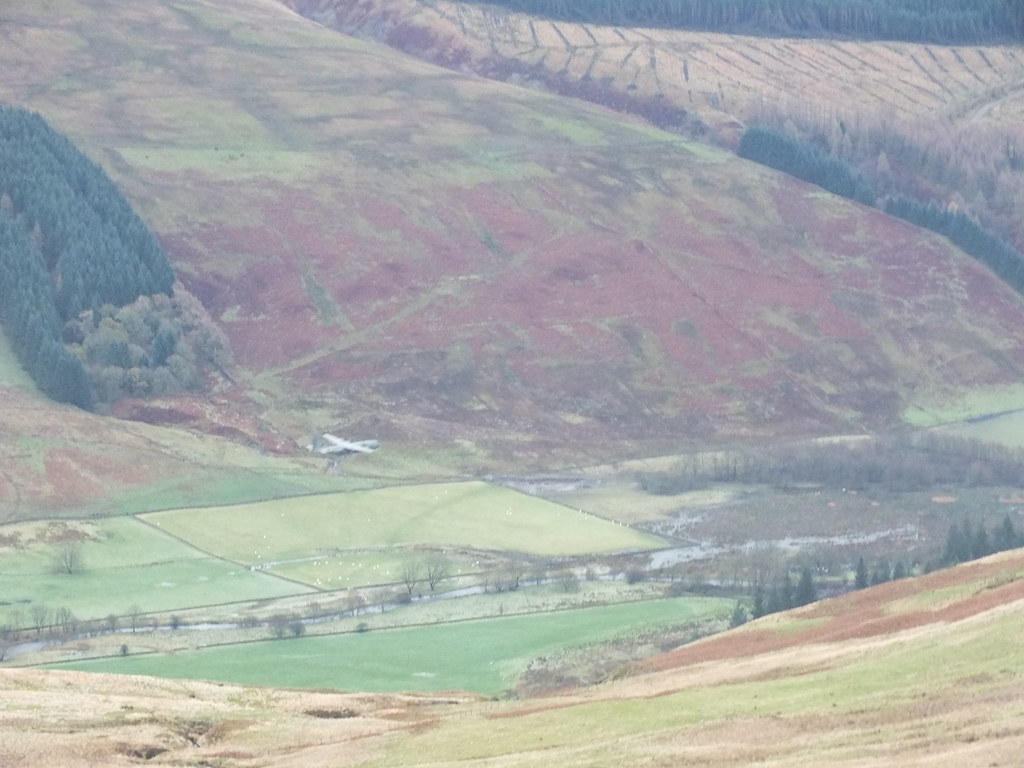 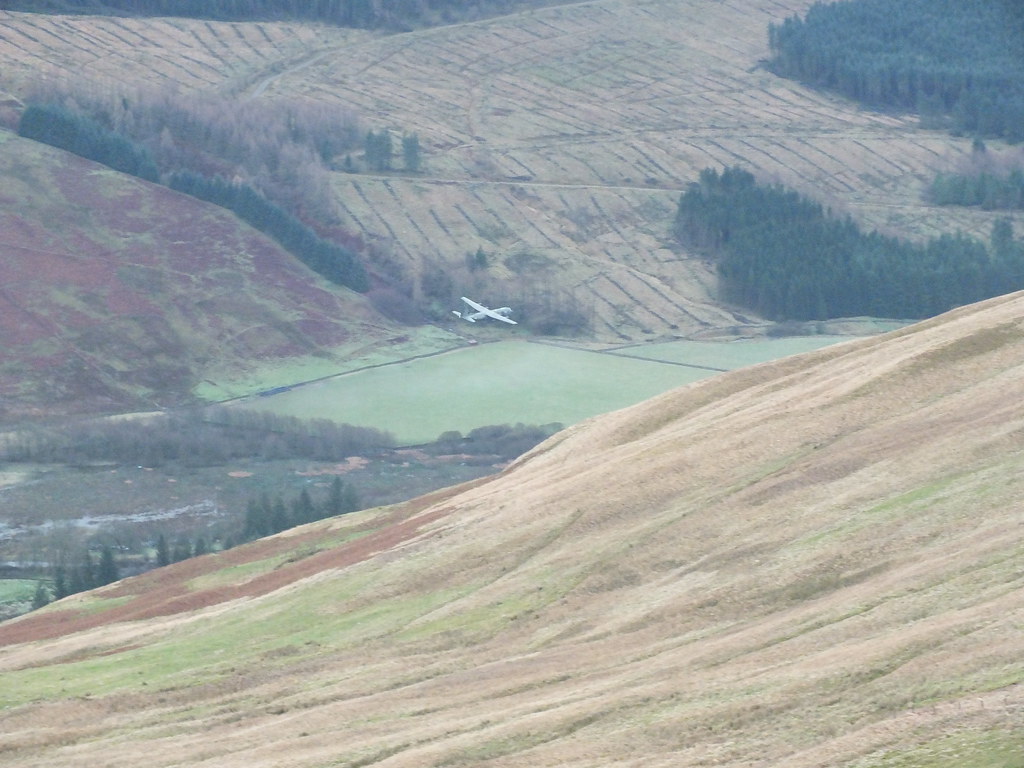 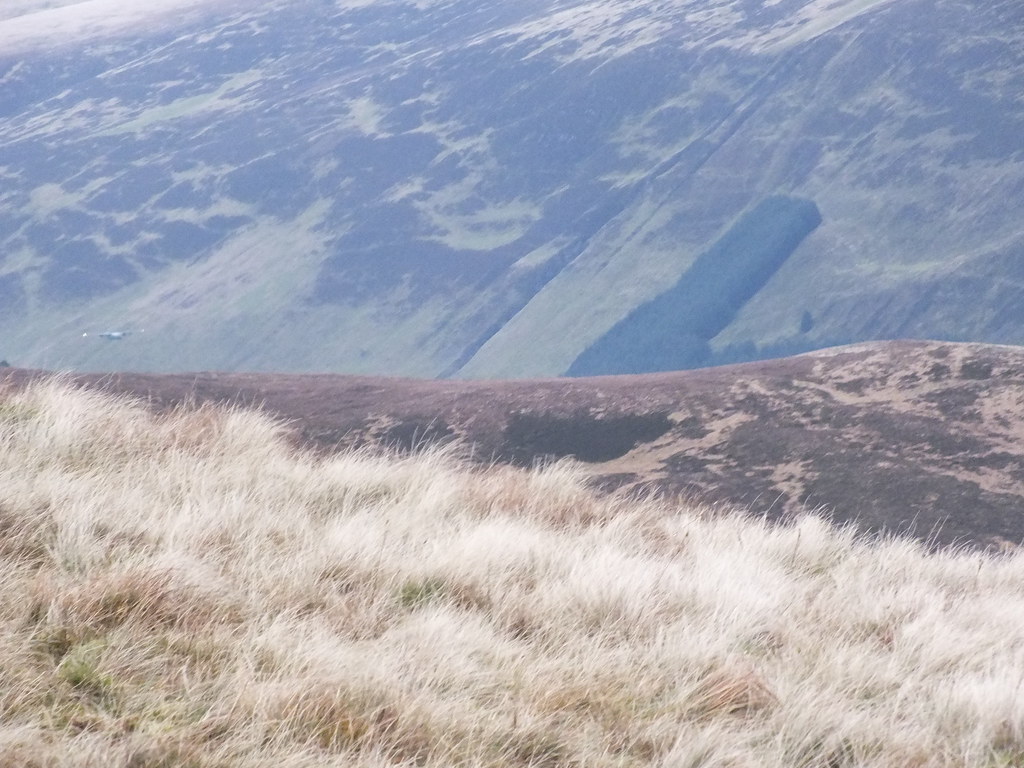 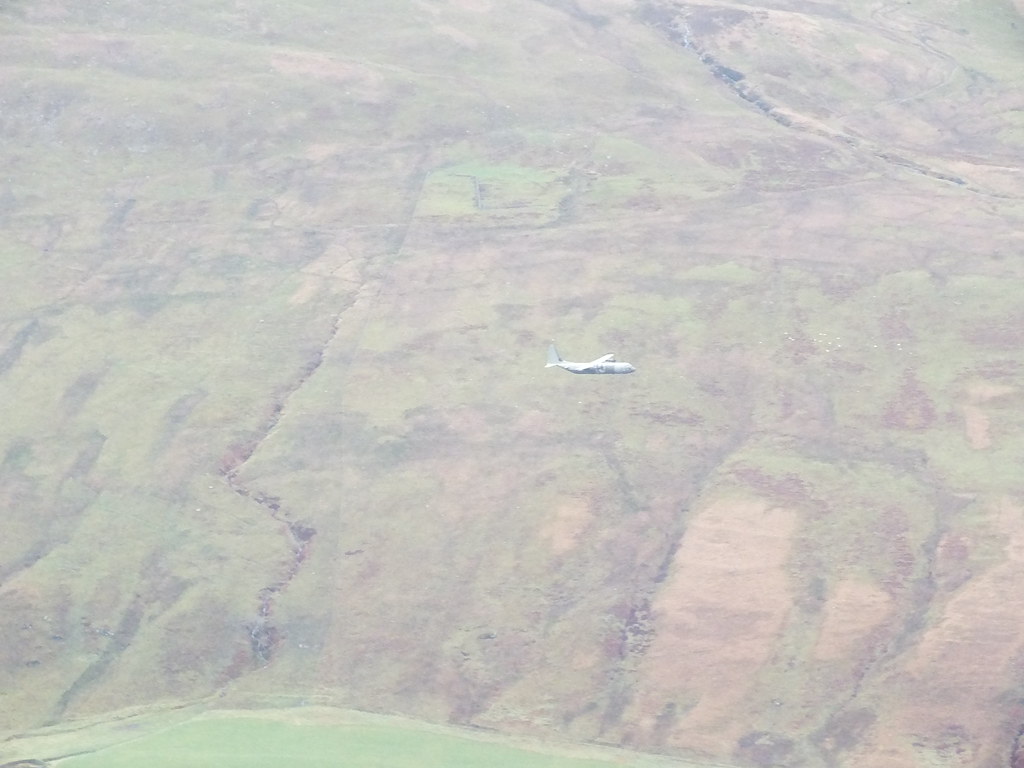 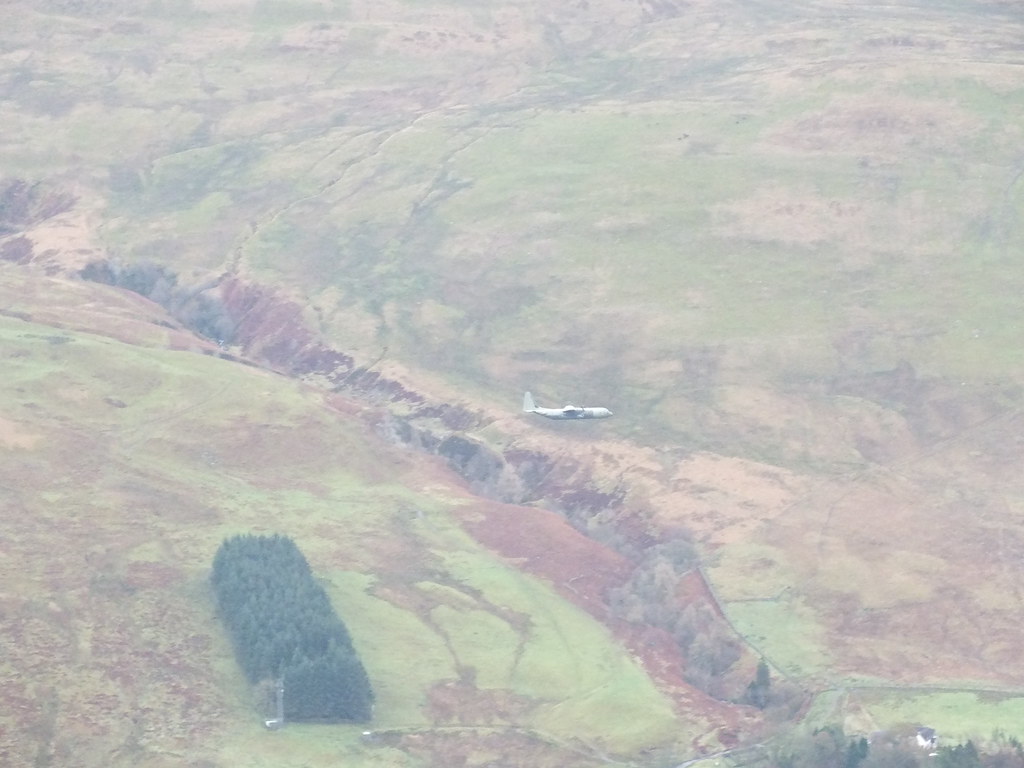 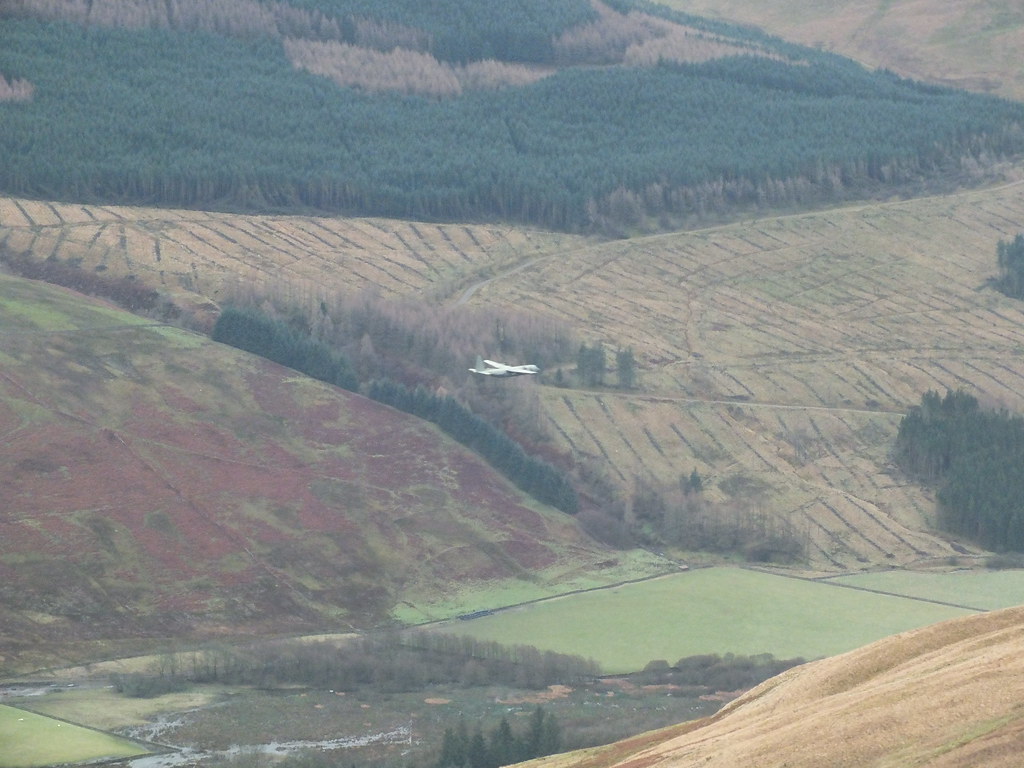 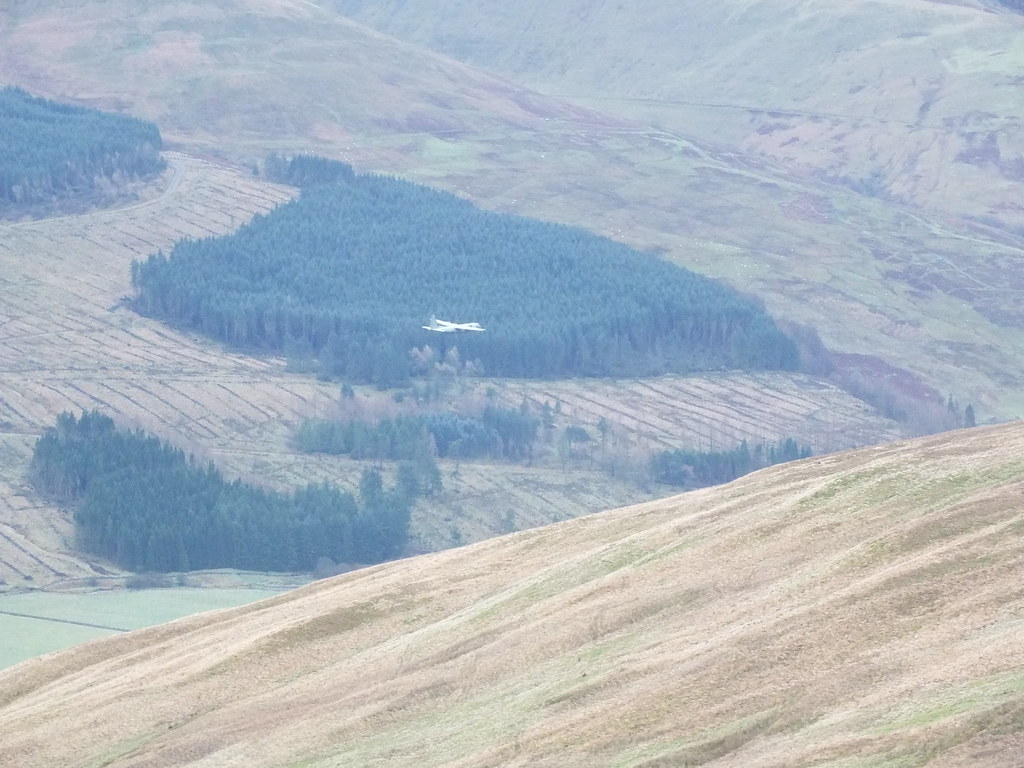 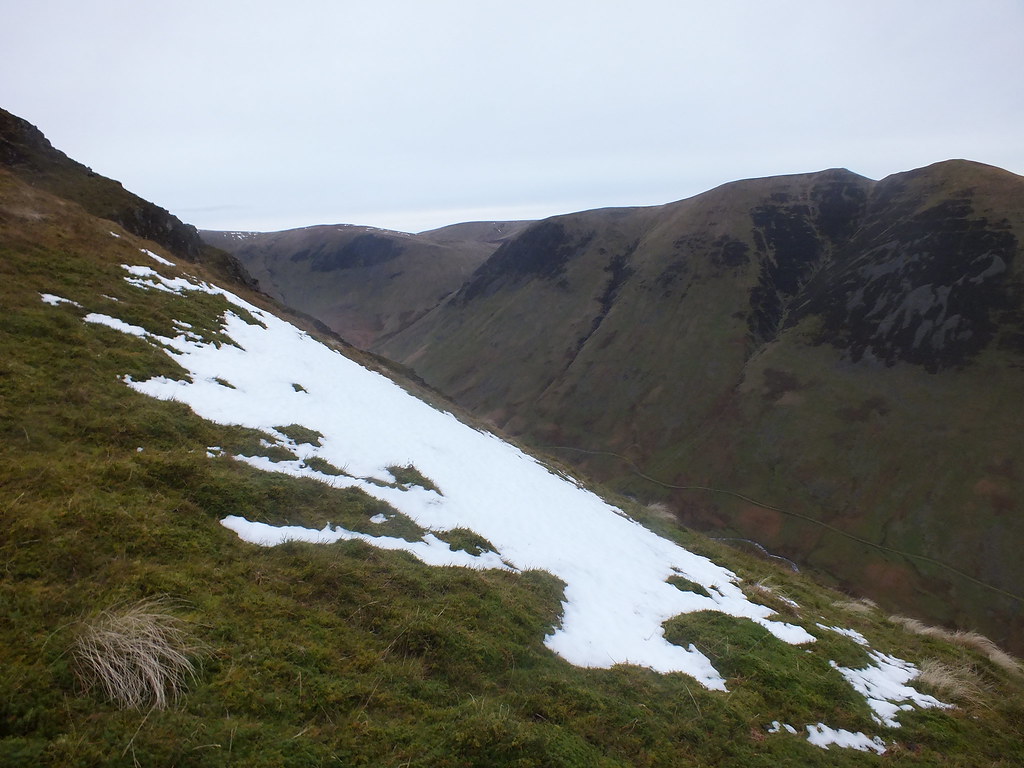 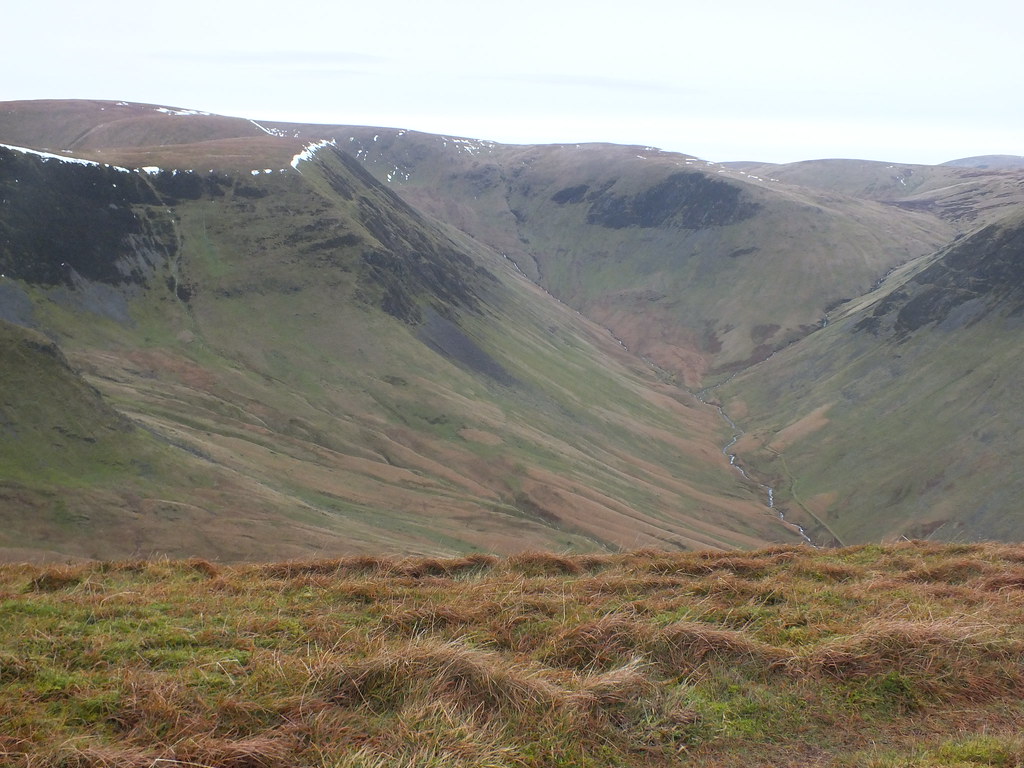 Surprise corrie, what a view

Once you reach the high plateau area the views are awesome and you can see exactly where you are heading, assuming you are not in the clag and it looks quite a long walk 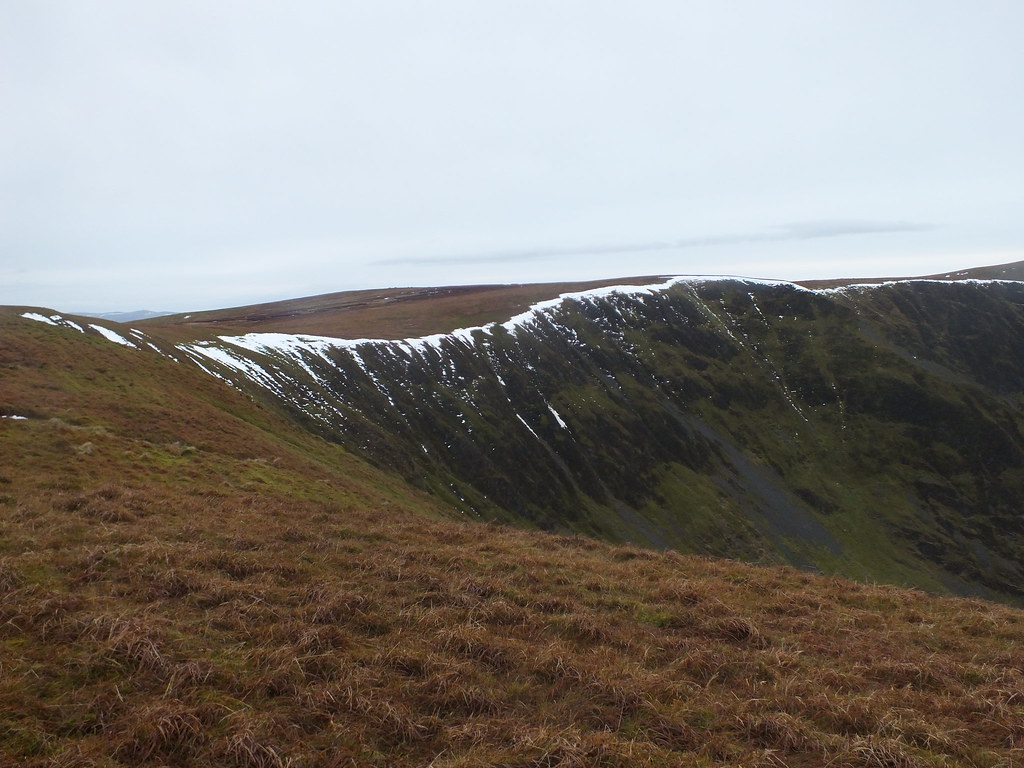 One of the drawbacks about reaching the plateau area is the views to the west are spoilt by three substantial wind farms, I would like to say they blend in nicely but I think we all know they are a proper eyesore 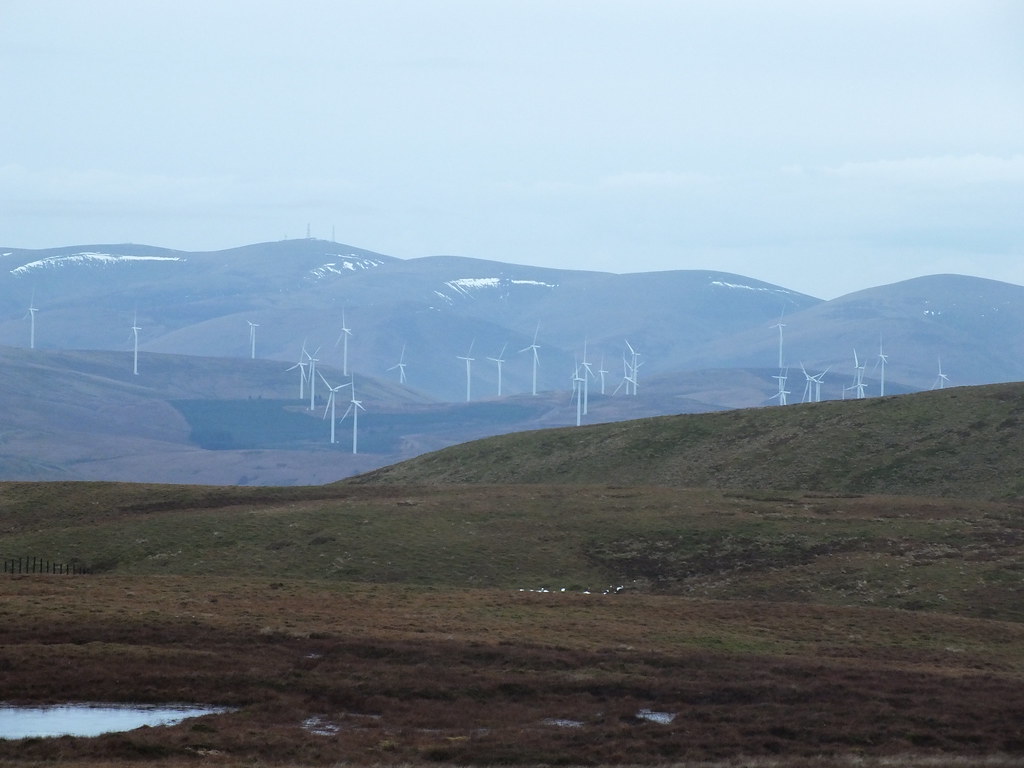 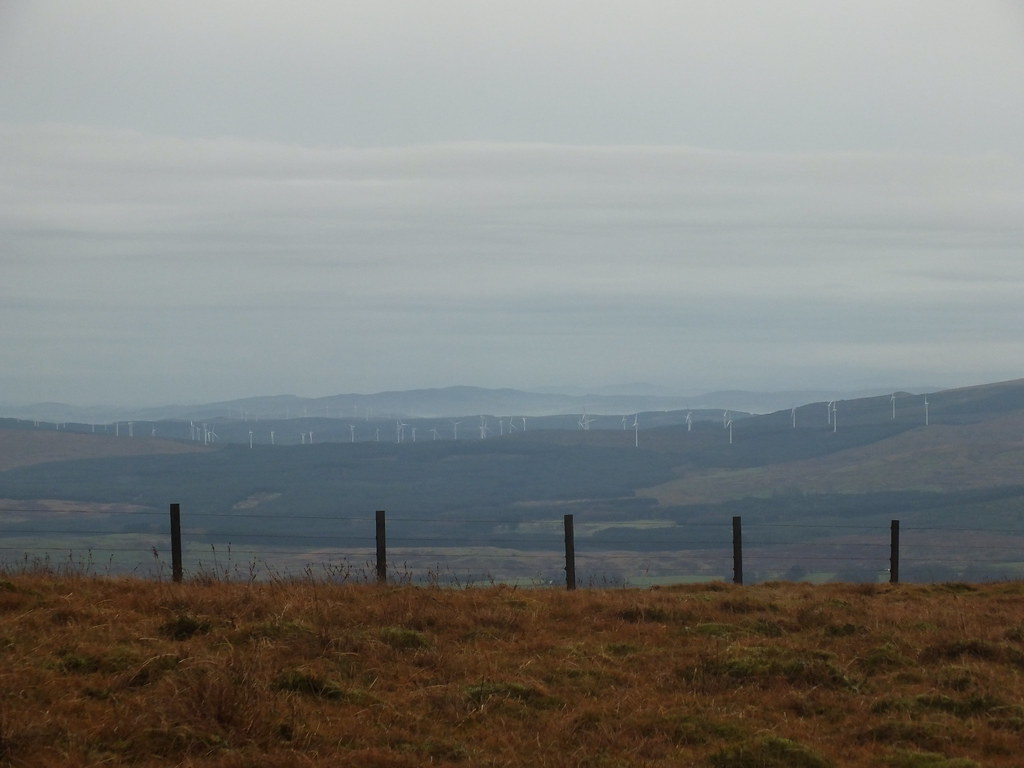 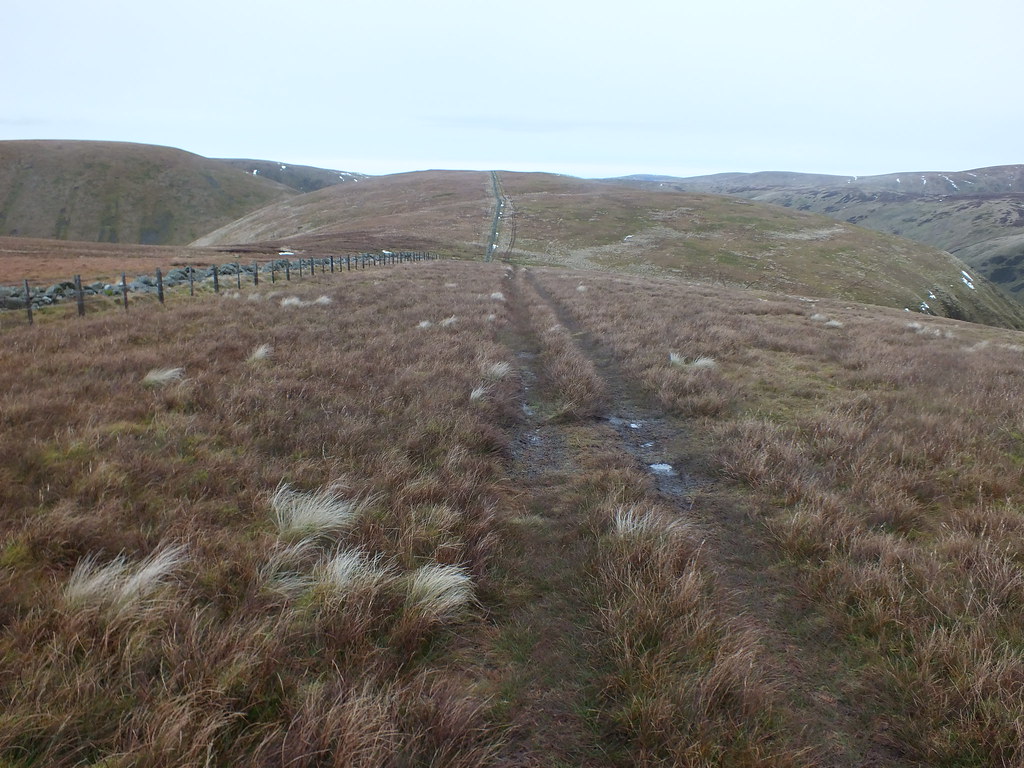 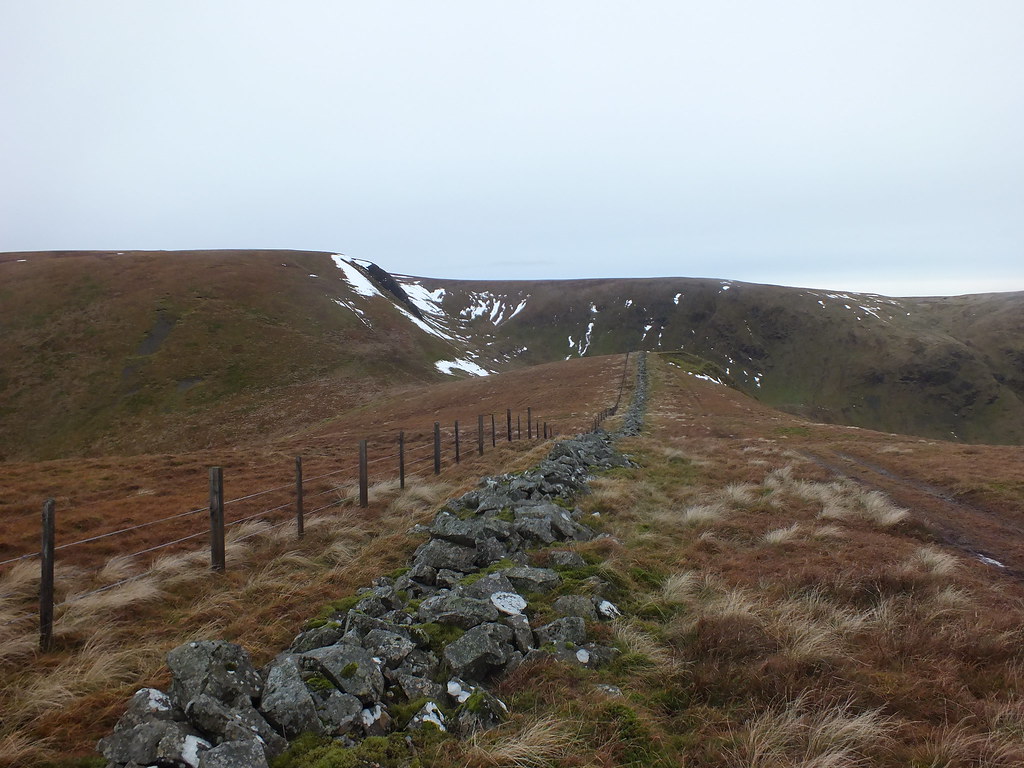 There is a bit a descent, before the push to the summit, stay to the right of the wall/fence 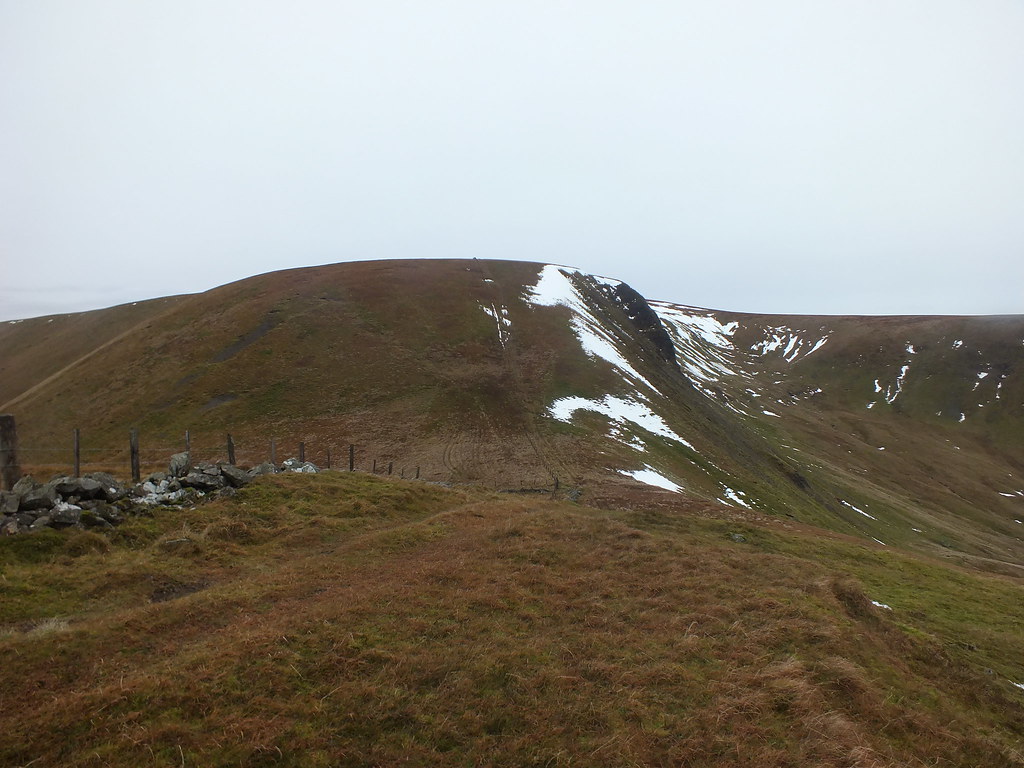 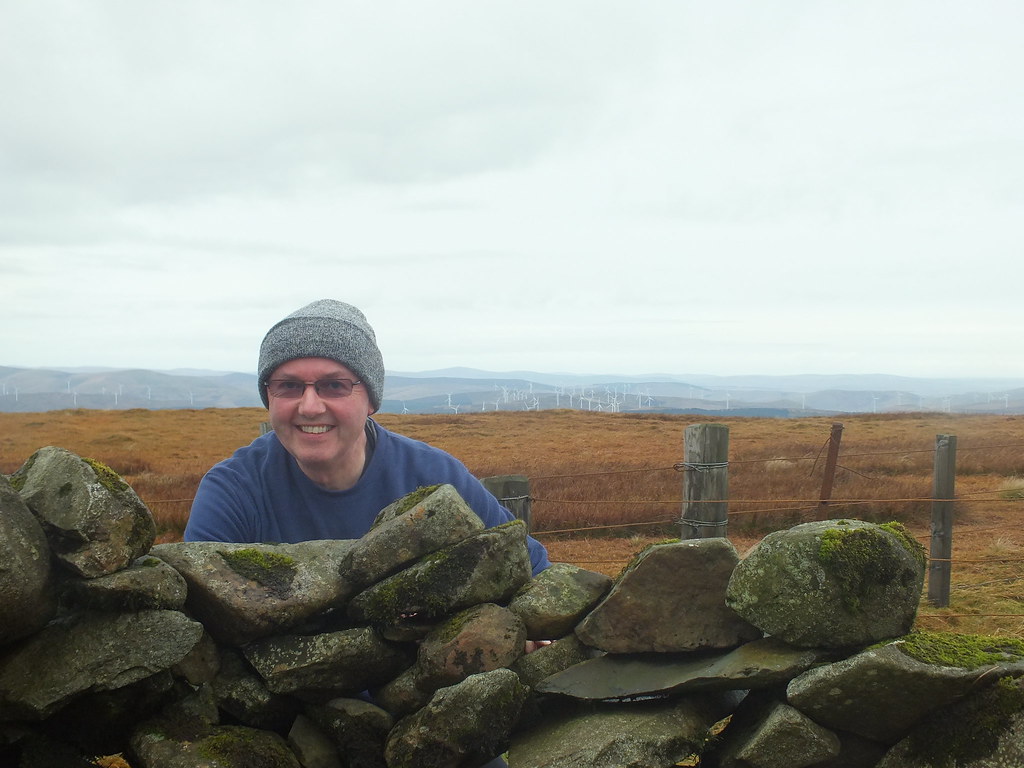 Summit selfie, sorry about the background 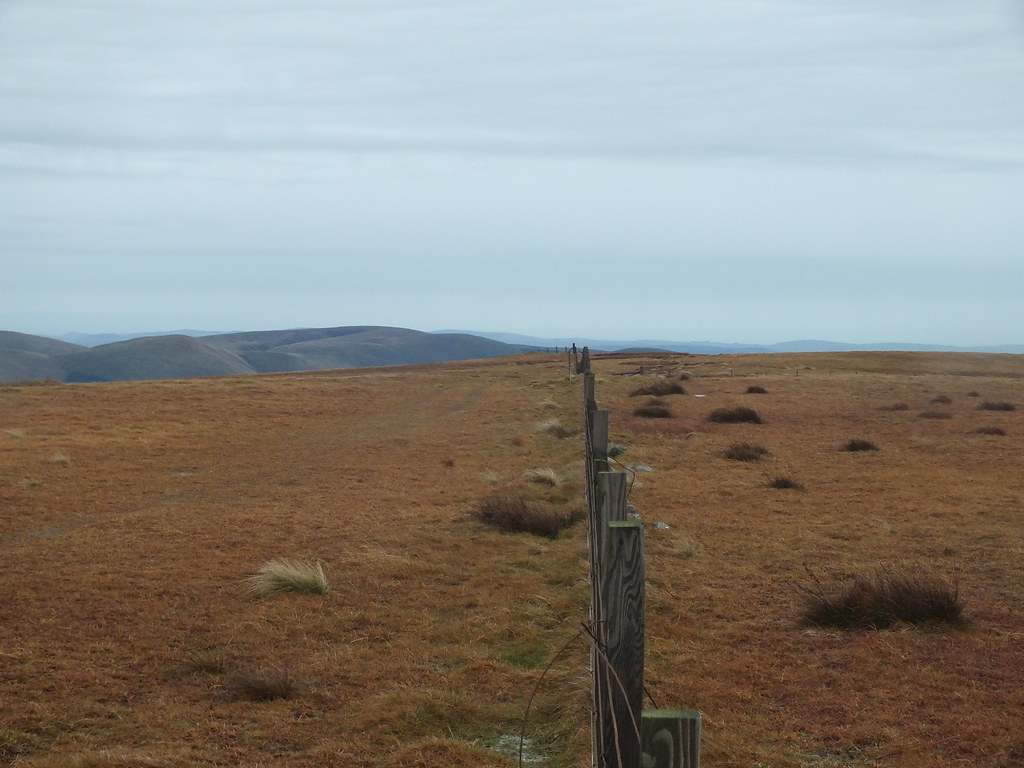 Fence posts in a nice line

The walk from the summit of Hart Fell was a matter of following the fence (keeping it on the left), after a while leave the fence and descend down from Saddle Craigs to Whirly Gill. There isn't a path, so it was a matter of picking the best way over peat hags, by this time my feet were a bit damp. About half way up Whirly Gill I could feel a few spots of rain, which as I got higher turned into sleet/snow and it was time for the jacket to make an appearance 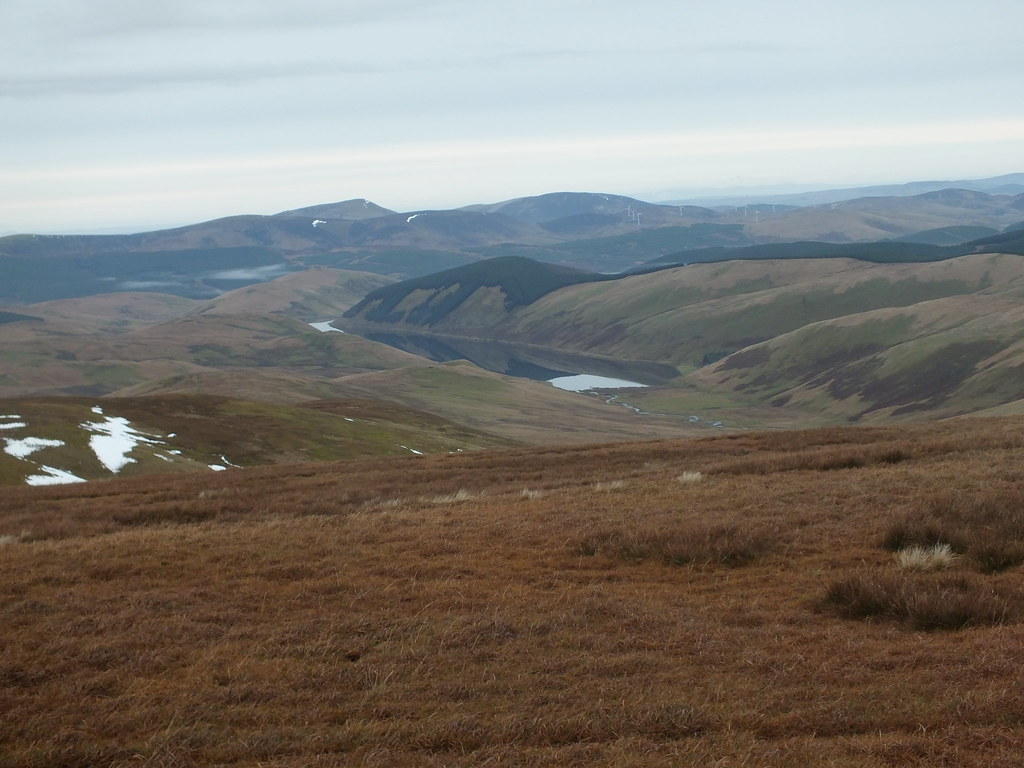 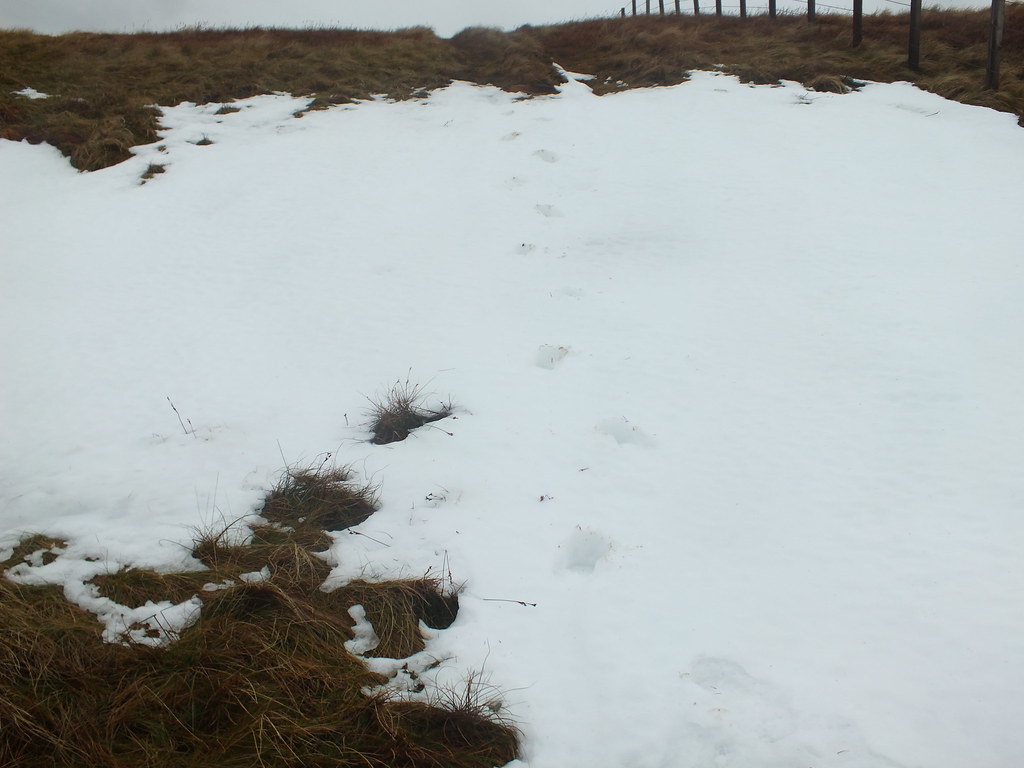 First patch of snow to cross

The camera was reluctantly put in the rucksack and only came out for a few more shots. Another surprise was the terrain between Under Saddle Yoke and Saddle Yoke so the camera had to come out. The bealach between the two summits was like anything you see in the Highlands 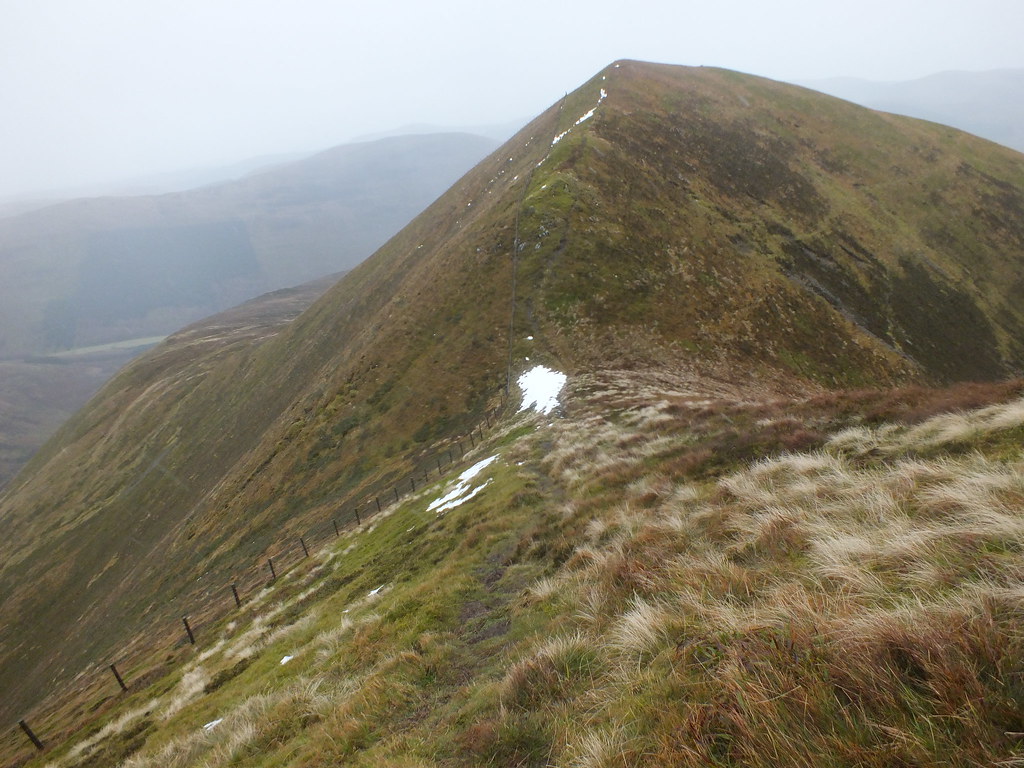 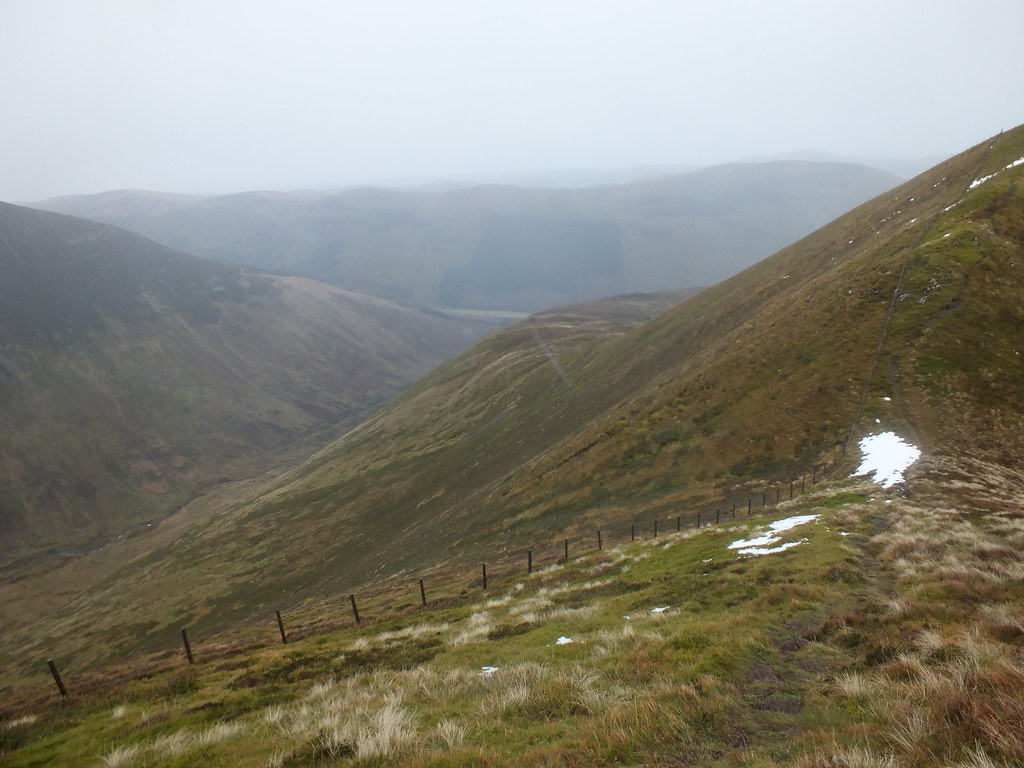 After descending down to the bealach there is a small ascent up to Saddle Yoke before the long descent begins, the path is a bit random so it was a matter of trying to pick the best way down. I was taking the descent very gingerly, as descending on wet grass is a recipe for ending up on ones backside

After 4.30mins I arrived back at the car and the rain was pouring down so it was a quick change and plan the journey home. As the walk had taken less time than I was expecting I decided to return the way I came

It was great to be out again and the Hart Fell horseshoe was a really enjoyable walk and I will definitely return either in better weather or a nice covering of snow.
The news about the Forth Road Bridge being closed until at least New Year may affect any future trips south, hopefully they can sort the problem sooner and safely

Enjoyed your report and photos (loved the narrow col). Well done on getting out in this spell of 'weather'! Like you, I am now having to think again about forays south (no more Donalds for a few weeks) so looking again at Grahams (and Marilyns) to the north and west. So grateful I'm also retired and not having to commute to Edinburgh - commiserations to all who face that journey until the Forth Road Bridge is fixed.

Hi Martin, thanks for this, the Hart fell round is one we've set out to do twice, unsuccessfully, due to it being clagged out or chucking it down, some useful pointers here, we'll have another go next spring, 3rd time lucky and all that

I did this round in clag a few months ago and still managed to really enjoy it though the initial climb up through the ferns was bloomin steep and slippy (probably as steep as anything I've climbed this year).

Always enjoy seeing the C130's and they give you a decent chance to photograph them, I always think if they go any slower they would drop out of the sky.

Enjoyed seeing the views as the first I got was when I was on Saddle Yoke. I still wonder if I took the wrong route down off Saddle Yoke, I followed the path for a while but when I decided to head down to the valley floor it was pretty steep and "interesting".

You've reminded me I want to go back and see the views.

Enjoyed reading this report and the fact that you had a flypast. Anytime that I am out its a tornado that passes and I hardly have time to think let alone get a camera out. Well done with those shots.

I've met walkers on these hills who seem to do as you have done and commented about the steepness of the ascent. I'm going to let out a little secret. From the Capplegill farm there is a track ascending SW up the hill and then around NT 136091 take the shoulder north up onto the 724m just before Swatte Fell - bit longer but for us oldies anything that takes the steepness out a climb is welcome. Hope this will help others if too late you. But then you now know that the border hills are more interesting once you have been on them

Hey Martin. Great report. Well done on catching the Hercules. I love seeing aircraft on a walk but am hopeless at catching them on camera. Frequently buzzed by Hawks in Tornados in the Ogwen valley in Wales but never managed to snap one yet!

Cracking report. Good to see these hills getting some recognition. One point tho, your pic of 'loch skeen' is actually fruid reservoir.