One of, if not the most iconic mountains in the United Kingdom, and very much a symbol of my childhood drives from Glasgow to my holidays in Glenelg and Arnisdale before moving north. Buachalle Etve mor, is such an imposing structure, and from certain angles, looks extremely difficult to climb. My mother used to tell me the stories about Glencoe, and one that stuck out, with a little artistic license, was that the Highlanders used to guard the passage to their Northern lands from the mountain, and would throw spears at unwanted guests. This may have been just an attempt to shut me up while driving through Glencoe, but it worked, as I was terrified that this was still done. The weather forecast was fantastic, but I was worried I couldn’t get out, due to the fact it was a good friend’s wedding the next day, and I had my best friend and girlfriend staying at mine before it. Luckily for me, the activity they wanted to take part in while up from London, was climb a Munro!!! Now I don’t think they had a total grasp of what a Munro was, and they certainly were not expecting to climb such a spectacular mountain, but going on advice and report, I felt that Buachalle Etive would be doable for them.
They both started off in great spirits, excited by what lay ahead. The approach makes it very clear where you are going, and to the untrained eye, it didn’t look that far. I explained to them how long I felt it would take, but they were sceptical, believing we would be up and down in 4 hours! We set a fairly steady pace, although we were wary of our 7pm dinner booking in Glasgow. Dave and Sheila were enjoying the space and freedom of the mountain, although it took a while to make sure Sheila wasn’t trying to access her phone. Both live very busy London lives, so it took some adjustment. Surprisingly, we were pretty much alone on the ascent, barring one mad guy who was out for an afternoon run! He trotted past us with ease, and within 15 minutes was nearly out of sight. The well defined path kept us on course, until the later stages of the valley, as it slowly faded away, and we had to get a bit more technical. This was passed with relative ease, although it really opened Dave and Sheila’s eyes to the fact we were now near the top of a mountain! At this point we met a gentleman who was just taking in the views. He put us a little wrong, by telling us we were still nearly 2 hours from the summit! I was sure this was wrong, but it did put a bit of doubt into our time keeping, so off we went.

We then met another guy, who recognised me from a recent visit to the Kings House Hotel. Now, my friend Dave used to get annoyed with me, because it seemed everywhere we went together while at uni, Edinburgh, or Glasgow, I would bump into someone I knew, either from home, or sport, or some other activity. So, you can imagine his light hearted anger, when he complained that even in the middle of nowhere, up a mountain, I still meet people! It made me chuckle a bit.

Anyway, final push to the top, and there are a couple of small false summits. We charged up and made the top. It was stunning! Surprisingly, with the hill being so quiet, we were joined by 7 or 8 guys, who just appeared having climbed the curved ridge. They were a laugh at me wearing my kilt, so you can imagine what they were like when the pipes came out to! They couldn’t believe it, and were very excited to hear me play. It is the first time up a hill, I have actually been under pressure to perform! 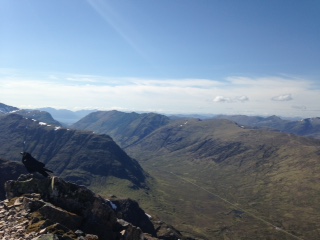 A couple tunes later, and it was time to relax, have a munch, and take it all in. We got our photos, after which we were very lucky to still have Dave. In Dave’s mischievous, and some would say daft, mind, he thought it would be funny, while posing for a picture with Sheila, to get down on one knee, before getting back up and saying “only joking”. I think even he realised afterwards that this was not the smartest thing to do, and I wouldn’t have blamed Sheila for knocking him off the hill! It is only a matter of time for them though I feel.
The descent, as ever, was tough, especially with the deadline looming for dinner. We called the restaurant and rescheduled, which helped us relax a bit. 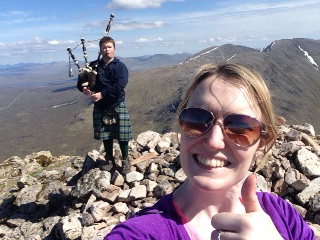 Everyone loves a selfie!

It was a wonderful day, and to spend it with the most unexpected walking buddies was magical. It was fantastic for me to share this with them, a far cry from their London grind. Safe to say, we were a little sore for the wedding the next day, which was a wonderful occasion.