Towards the end of November, after an incredibly warm autumn, winter finally seemed to arrive. Making a very early start from north Worcestershire on the Saturday morning my mate Jon and I arrived near the Talybont reservoir ready to tackle Waun Rydd and the nearby Nuttalls of Allt Lwyd and Bwlch y Ddwyallt. The drive to the Beacons began in the dark with gales still howling and autumn leaves whipped up into clouds all over the road. The sun rose as we approached the hills and from some distance away I thought I could spy snow lying on the tops. Sure enough, as we drew nearer to Talybont we were greeted with the impressive sight of the morning sun casting a pink and orange glow over the snowy slopes of Pen y Fan. I don’t know what it is about the white stuff but I just love climbing hills in the wintertime. I knew from the forecast that this would be a good day with clear blue skies. The only concern was the wind and cold. 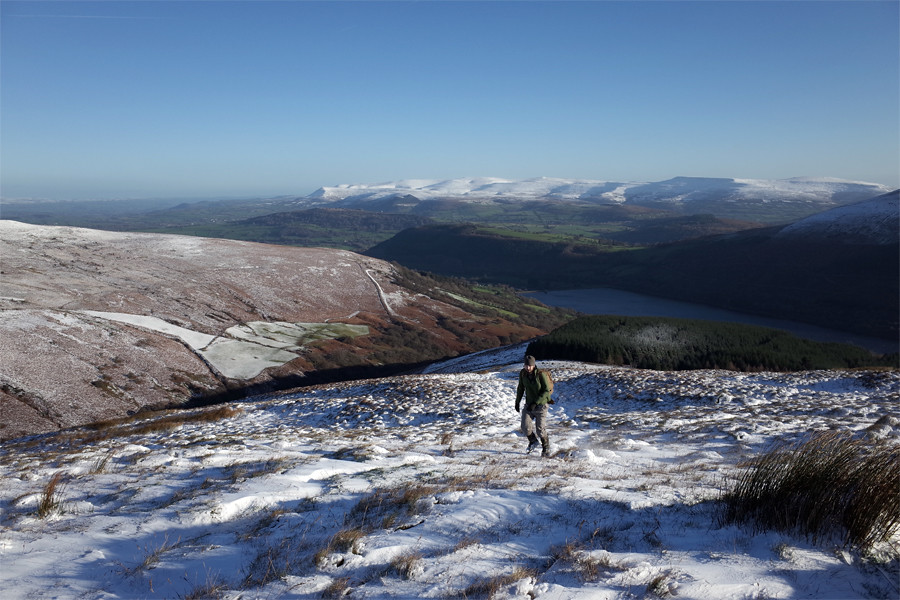 Setting out towards Allt Lwyd 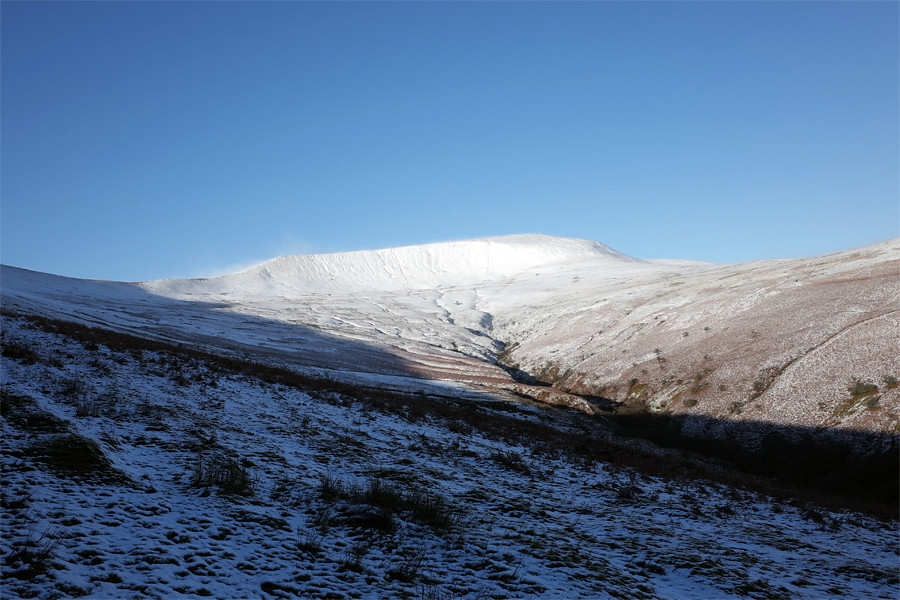 
Parking up near the reservoir I got my first indication of how windy it would be when I struggled a little opening the car door. Oh dear. If it’s that windy down here, what on earth will it be like up top? Well, only one way to find out. Off we plodded. Not even half way up Allt Lwyd I had to swap my woollen mittens for my lined, goretex gloves. Jon only had fingerless mitts with him. He tried my spare winter gloves but they wouldn’t fit so went back in the pack. In the end he was able to stretch my redundant woollen mitts over the top of his fingerless ones and we continued towards our first Nuttall of the day. Leaving the shelter of woodland and onto the open hill the wind was absolutely ferocious. Easily above 40mph. Not the fastest winds I have walked in but certainly the coldest. The night before, temperatures had plummeted and the wind was blowing straight from the north. In the past when I’ve walked in high wind in Wales and Scotland it’s usually been a southerly. Walking in a northerly gale though the difference was incredible. Even inside my super comfortable fur-lined gloves I was constantly having to make a fist to get some skin on skin contact to keep my hands warm. I also found it necessary to put my snow goggles on just to mask as much of my face as possible from the burning wind (I think a balaclava might be added to my winter kit list). 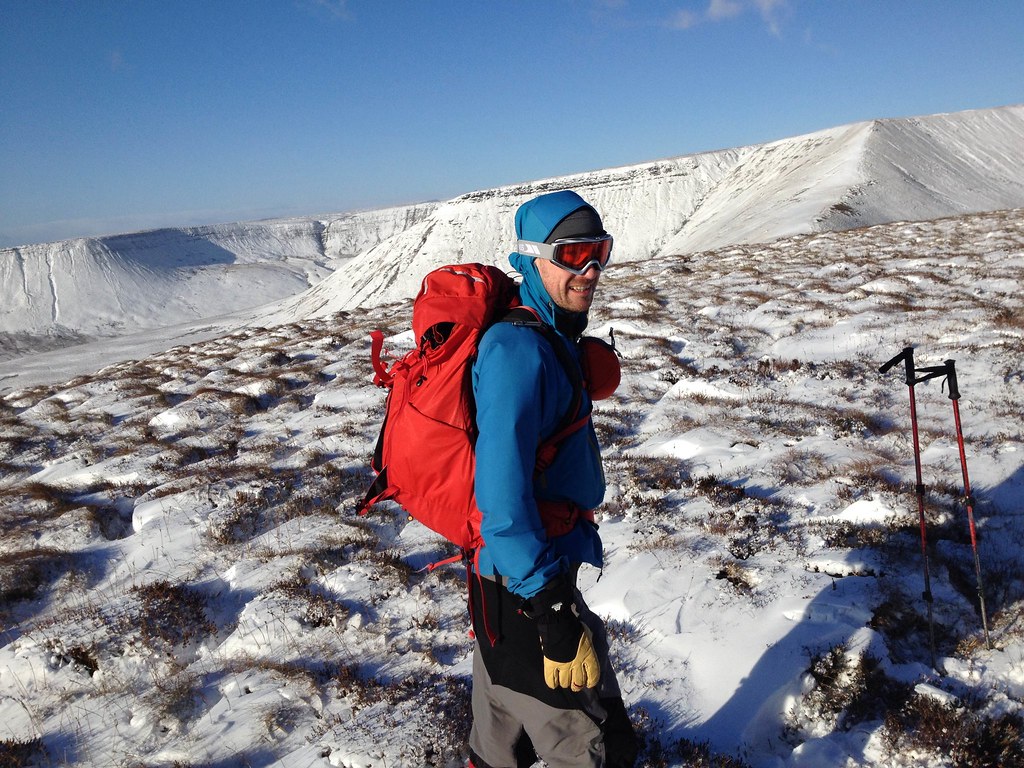 As cold as it looks


Looking west towards our objective we could see tons of spindrift being whipped off the crest of the hills. Behind us to the east the Black Mountains looked impressive in their winter coat. Having walked all the Hewitts in that range on the English-Welsh border it was great to see them from a distance. With snow on their tops the ‘start’ and ‘end’ of the range was easy to discern. After bagging Allt Lwyd we moved on towards Waun Rydd. This involves a short but quite steep ascent above Craig y Fan before emerging onto broad, flat summit. I mistook the first cairn on the summit plateau for the summit itself then realised I had further to plod before reaching the actual top. The terrain underfoot was quite hard going and now we were exposed to the full force of the northerly gale. There were splendid views over towards the higher summits of the Beacons. In the far distance Jon spotted a trio with very large, heavy packs advancing at quite a clip. These hills are famous as a training ground for UK special forces and it’s not the first time I’ve seen blokes hauling improbably large loads in this part of the world. I gather that to ‘tab’ is a military acronym for ‘tactical advance to battle.’ I think I prefer the hillwalker’s ‘tactical advance to beer’ though! 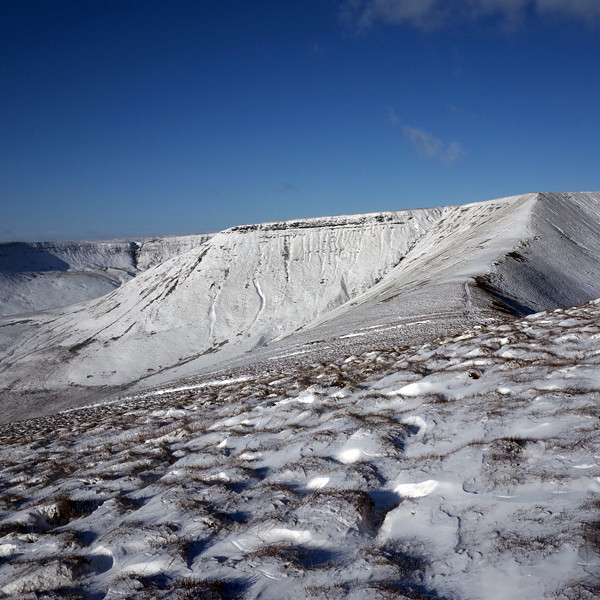 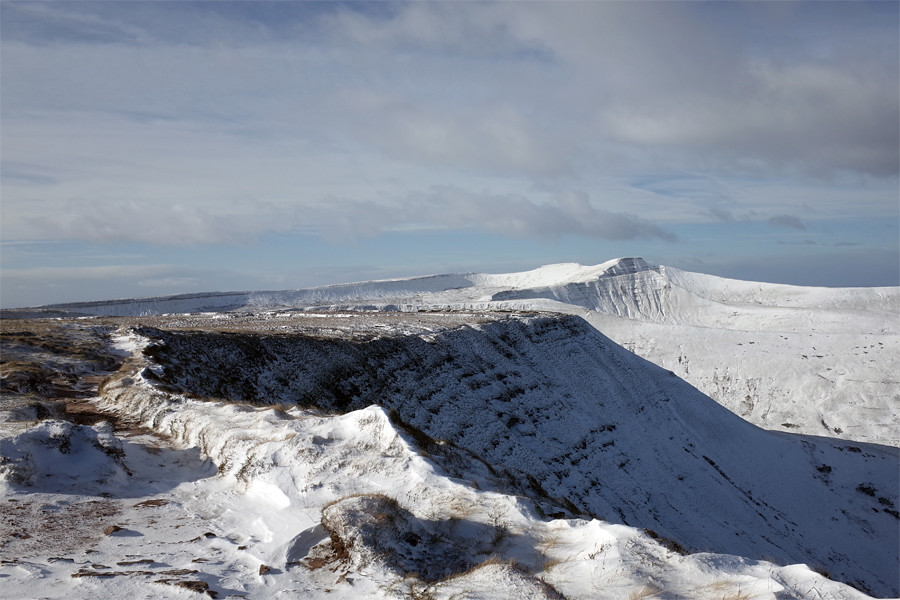 
At our third top, Bwlch y Ddualt we paused to finish the rest of our food. It was at this point we had our first company of the day with quite a large school group arriving. I was horrified to see one girl with no gloves at all and shivering noticeably. Her hands looked red and I reached into my pack to offer my spare winter gloves which were gratefully received. Soon the group’s teacher or supervisor arrived. Noticing that a couple of his charge needed hats and gloves he produced a small collection from his sack and distributed them and I got my spare gloves back. I was pretty surprised. Taking a group into the hills then surely a kit check for the whole group would be in order before setting off, rather than waiting until you’re 2500 ft up to find out who needs what? We chatted briefly with the group who explained they had planned to walk the Neuadd horseshoe but had been unable to get their vehicle up to the forestry car park because of snow and ice so had plumped for Waun Rydd instead. To be honest I think we were all better off avoiding the higher summits today, it being so windy. 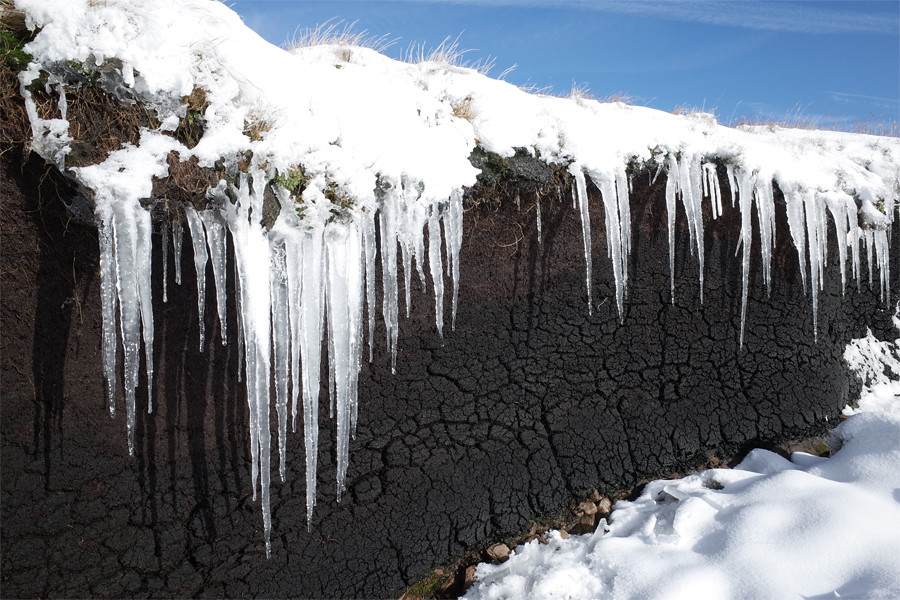 
To our south east we could see a memorial cairn by the crag Cwar y Gigfran. It commemorates the six Canadian crew who died when their Wellington bomber crashed into the mountainside on a training flight in 1942. We decided not to visit the memorial on this occasion and instead turned for home. Our route back took us back over the windy plateau of Waun Rydd towards the huge beehive shaped Carn Pica. More than thirty miles to the south the Bristol channel was visible. Crossing the plateau, the flat topped Black Mountains appeared again to the east. The view reminded me of a painting of the Cairngorms by Norman Wilkinson that featured in LNER posters in the 30s. Though of course not in scale or altitude I nevertheless find some similarities between the hills of South Wales and some of those in the east of Scotland. Navigation across broader, flatter summits can pose a special challenge in poor weather and while my experience of the Cairngorms is limited (one winter visit in 2012) I thought to myself that I should spend some more time in clag on the Beacons before undertaking any really long routes in the Cairngorms. It will be be good practice. 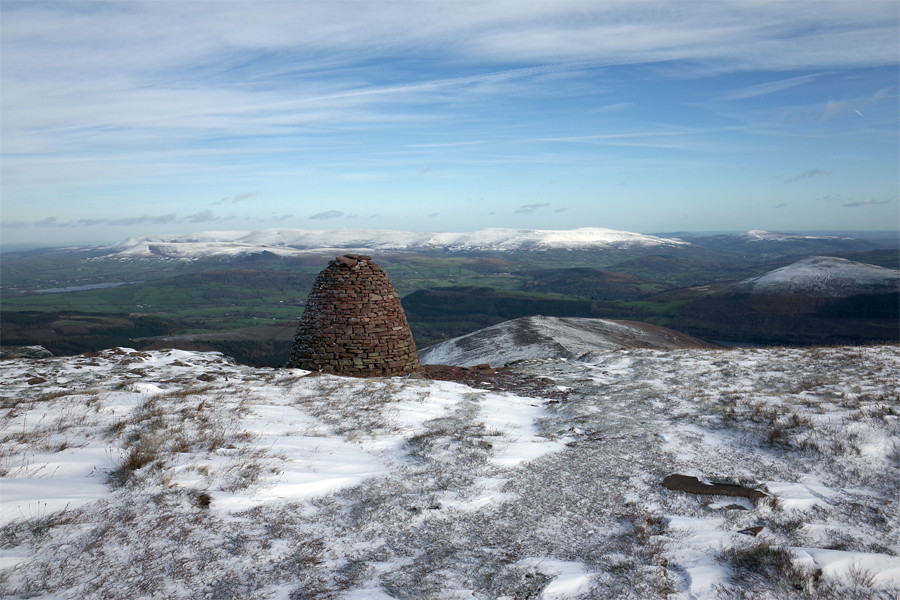 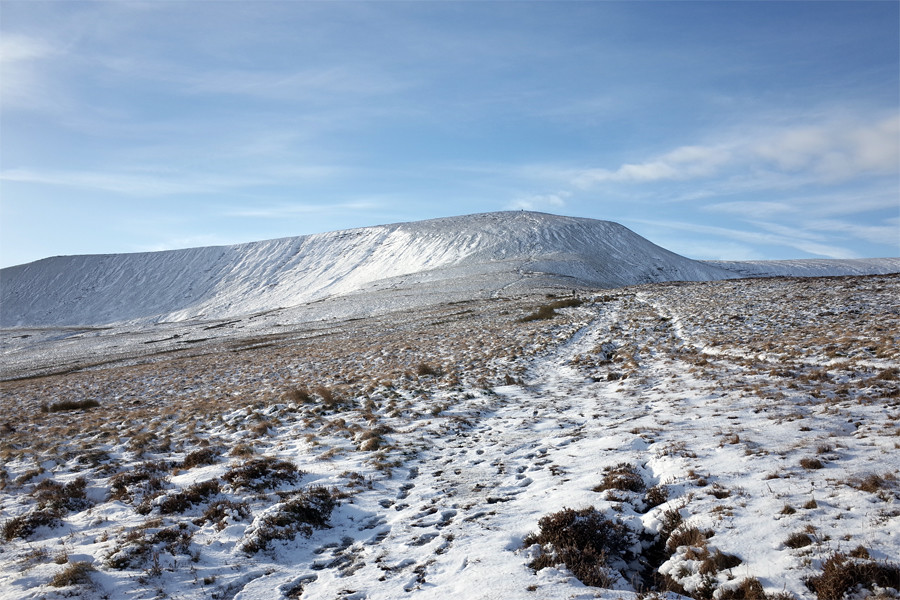 Carn Pica is just visible in this shot too!


I hope to return to the Beacons soon. Given my location they are my most accessible big hills. Gazing anxiously at my munro chart this weekend I found myself wondering when I’ll finally hit three figures. It occurred to me that if all the time I’d spent in the Welsh hills had been on munros I would be that much nearer to my goal. Nevertheless, I’m enjoying tackling the Welsh two thousanders at the same time as the munros. Particularly in these shortest months of the year when winter storms and avalanche danger can disrupt plans in the Highlands, many summits in Wales are still there to be climbed. 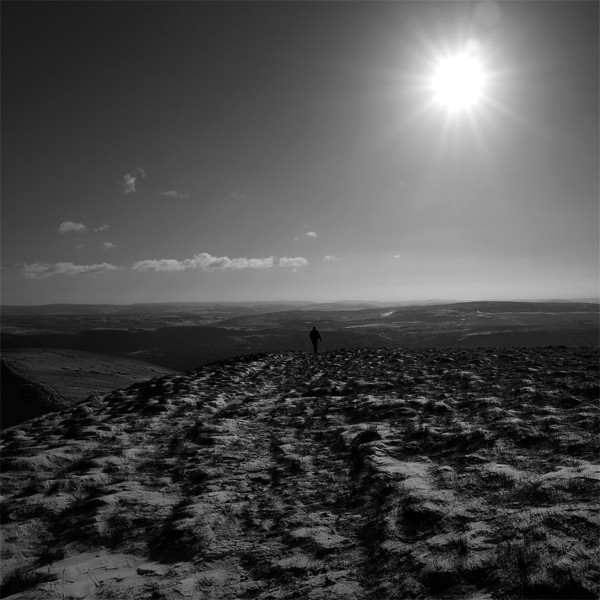 Nothing beats a good winter walk

RouteWaunRydd.GPX Open full screen  NB: Walkhighlands is not responsible for the accuracy of gpx files in users posts

Wonderful, if chilly conditions. Really nice up there, that little bit quieter than the higher tops.

A little different from our retreat from Llyn Cwm Llwch last night...only the second time I've ever been physically picked up and thrown over by the wind!

Cheers Mal. Sounds scary. I've never experienced lift off in the wind but have been reduced to a crawl a couple of times! The Beacons are a lovely area and I'm looking forward to seeing its western end.

That looked really cold, and wonderful!

Great read Riverman, 'Tactical Advance to Beer' made me smile

As for the schoolkids, I'm with you a kit check before departure (as a minimum) would be expected

Some lovely pics of a very cold wintery scene

Certainly does look cold! It reminds me of that frozen planet in the film Interstellar. I find winds of 70kph or above seriously disturbing, not to mention the windchill factor. A balaclava is an excellent piece of kit, I can't recommend one too highly!