Raw power of the Garbh Uisge - Falls of Leny

Raw power of the Garbh Uisge - Falls of Leny

Route description: Bochastle and the Falls of Leny


The exceptional rainfall that sadly flooded thousands of homes in northern England and Scotland over the weekend provided a chance to view the Falls of Leny in unusually high flow. I had mixed feelings about going to appreciate something that's caused so much misery for others, but it still seemed a good opportunity.


falls-of-leny.gpx Open full screen  NB: Walkhighlands is not responsible for the accuracy of gpx files in users posts

Wary of possible flooded roads on Sunday morning, a quick check on the internet showed that the A84 was submerged north of Boscastle. Luckily for us, this was exactly where we were planning to park. This part of Scotland didn't get quite as much rain as some places further south this weekend, but acres of flooded fields still lined the M9 around the Forth valley, and a number of the shops on the south side of Callander High Street were under water.

A heavy shower passed over as we arrived at the car park, with blue sky emerging from above a snowcapped Ben Ledi. With the ground so wet, we were grateful for the excellent path surface on the old railway line. 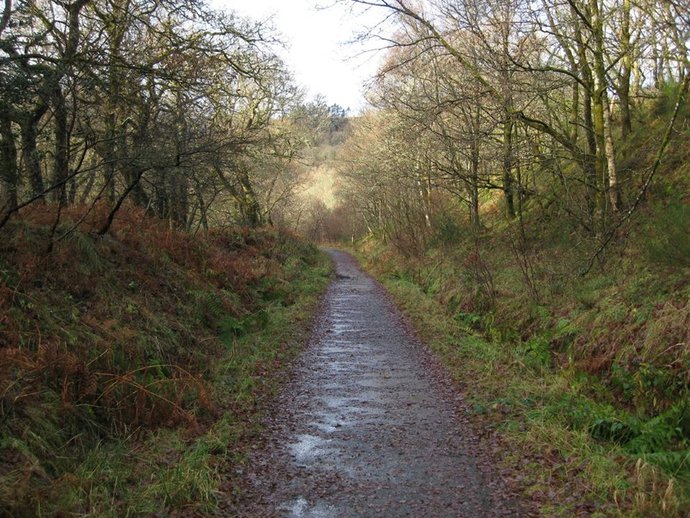 The paths closer to the river were underwater at first - the Garbh Uisge had easily burst its banks here. Closer to the Falls of Leny the ground slopes more steeply away from the water, which let us get closer. The photos don't really capture the raw power of the torrent - its velocity and noise particularly striking. 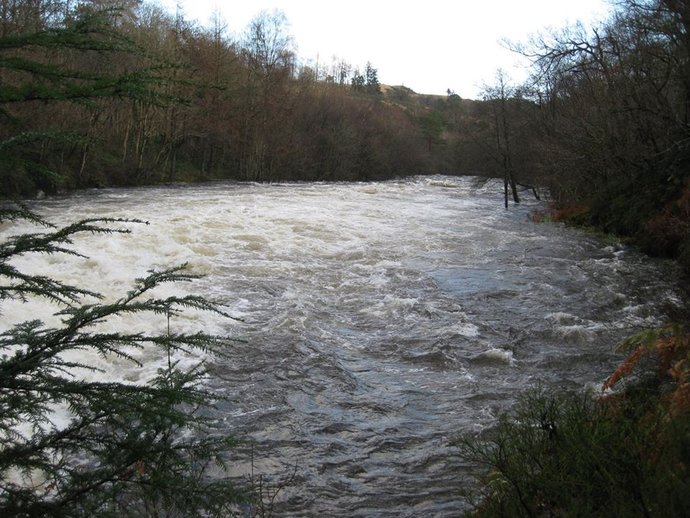 Given how wide the river was just below here, it must have been extremely deep when forced through this little gorge here: 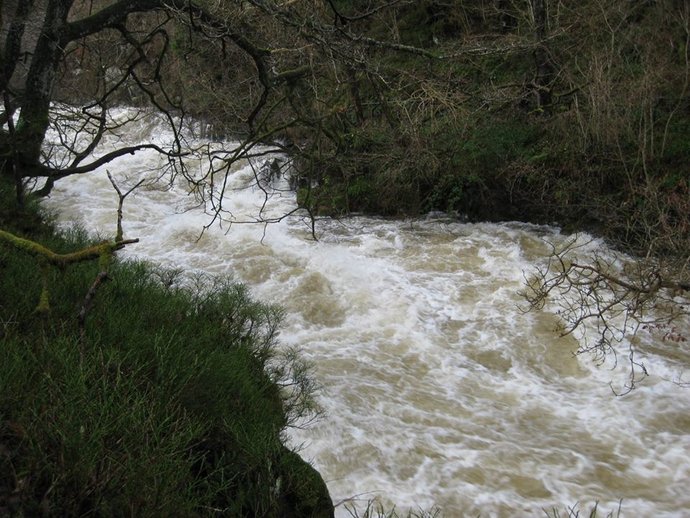 The path on the other bank was deep underwater, only the tops of some of the railings visible: 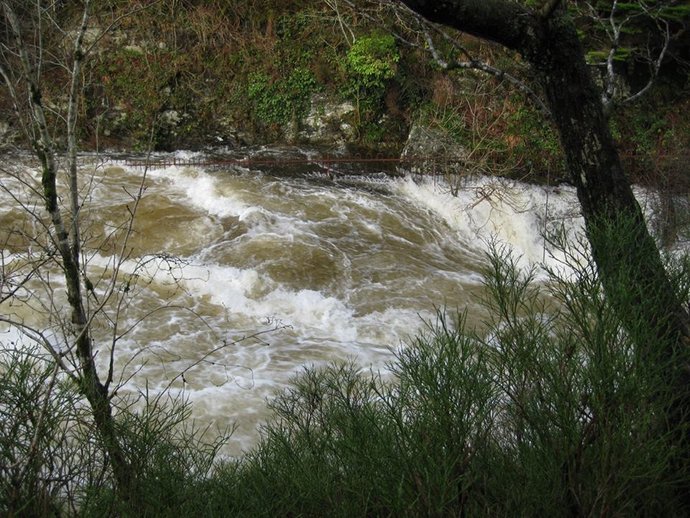 The bit of the "Falls" that most people seem to take pictures of are where the river's split in two by a large rocky outcrop. Today this was almost submerged - waves of spray breaking over the top and running down the front face. 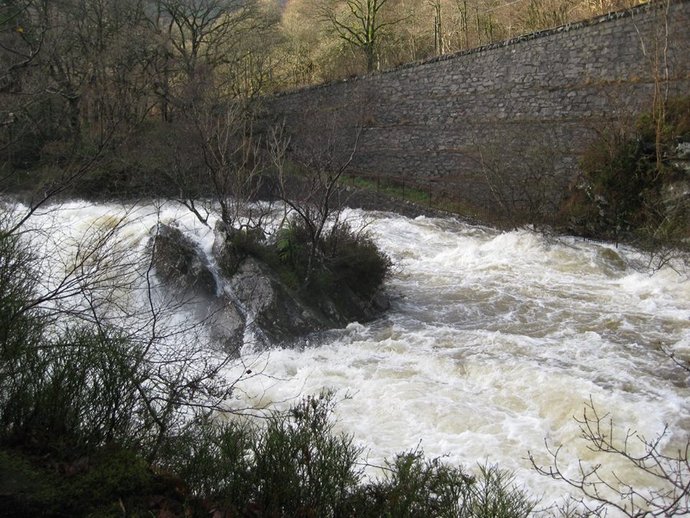 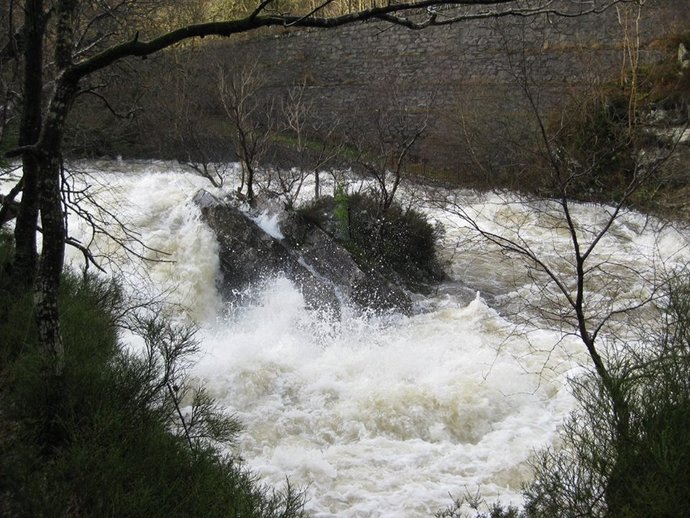 Beyond the falls there were occasional glimpses of Ben Ledi through the trees... 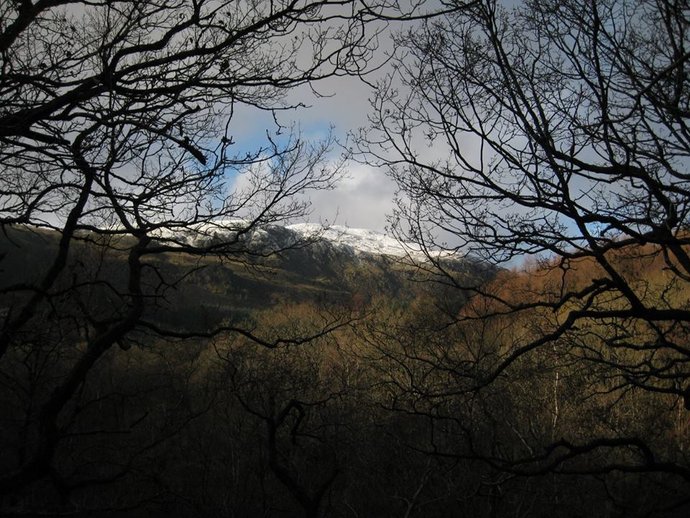 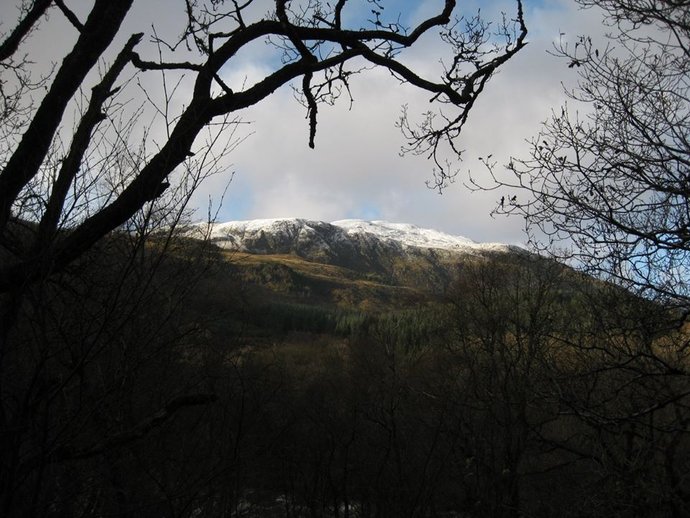 ...trees which had their bases well underwater at the moment! 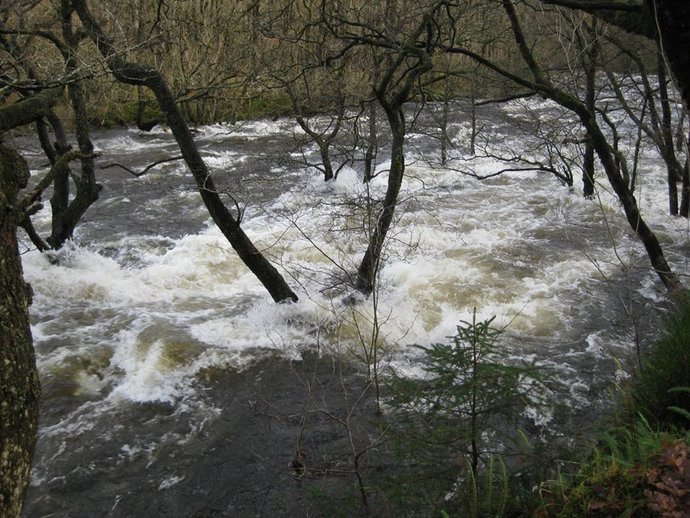 The path was only a few centimetres above the river level just before reaching the car park fro Ben Ledi: 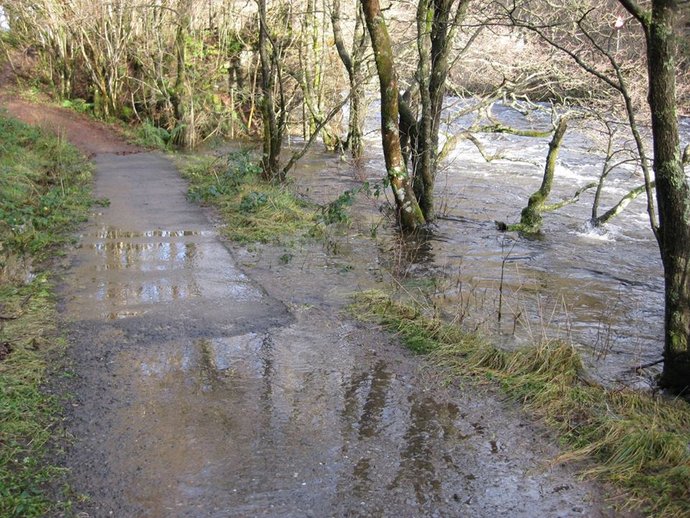 View towards Ardnandave Hill from the road bridge to the car park here: 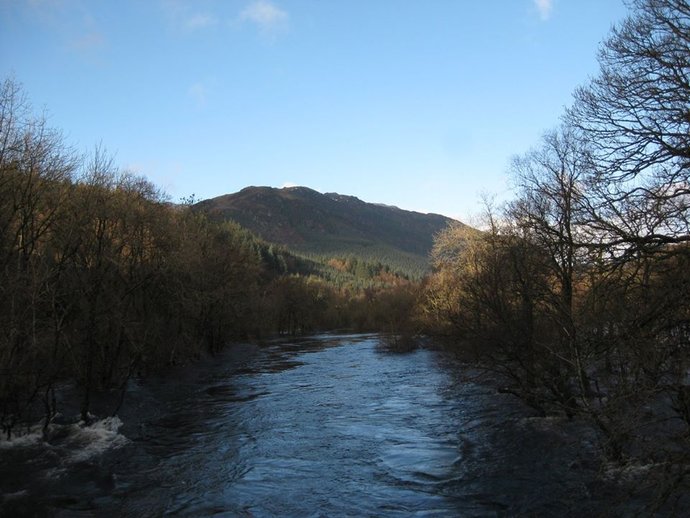 The return used the beginning of the Ben Ledi hill path, which, no doubt thanks to it being in the National Park, is excellent - although taking a particularly direct route up across the contours! The views ahead and towards Loch Lubnaig improved with height. Behind, we could see where the A84 was flooded (in the water behind the trees in the centre): 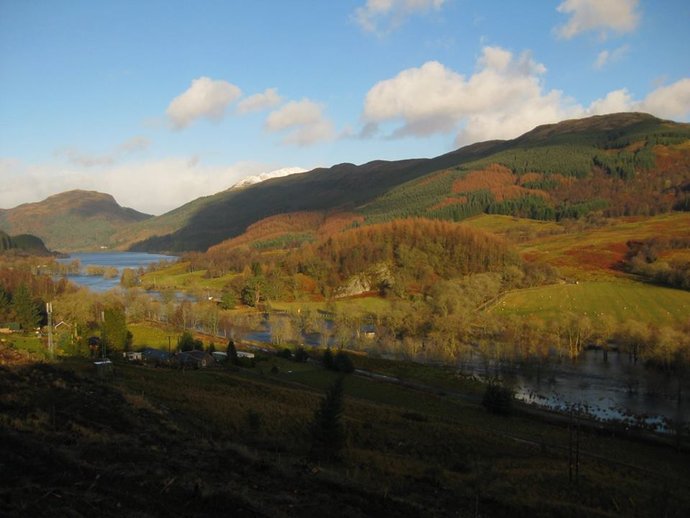 The Trossachs seem to have beautiful colours at all times of year: 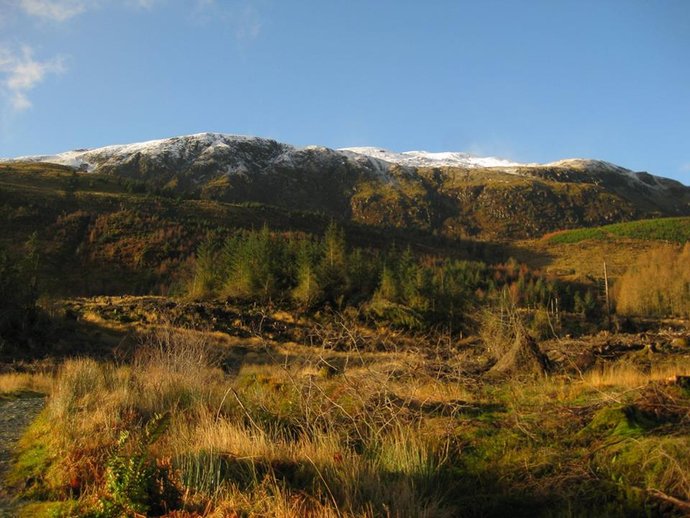 Soon we reached a track that cut across (thankfully!) the slope ahead - turning left took us all the way back to the car park. At first we stayed high above the Garbh Uisge: 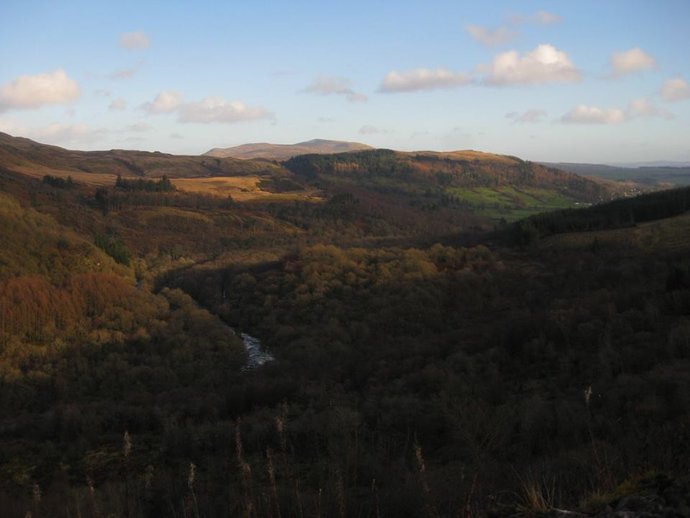 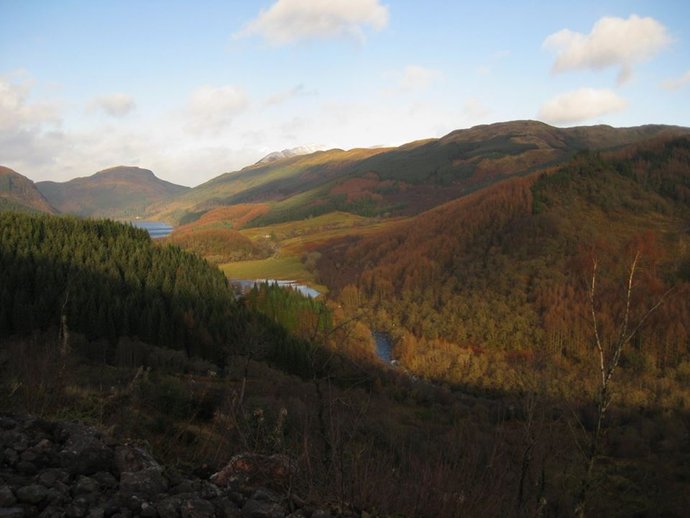 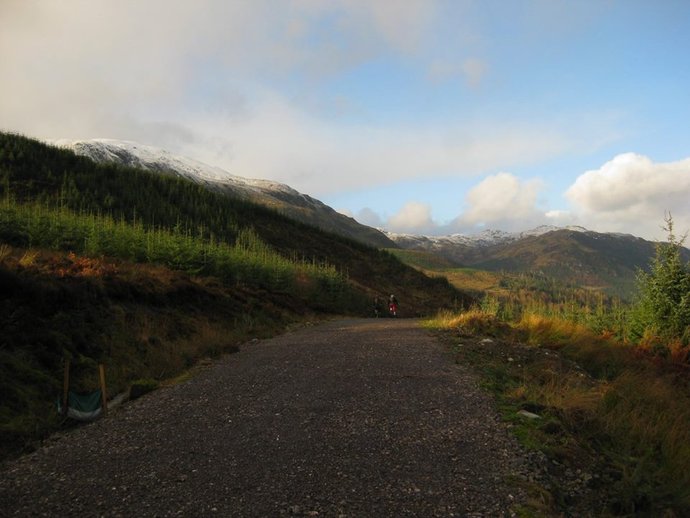 Eventually we started descending on the south side of a low ridge, with views towards Loch Venachar. Droplets of rain were falling on us from a far-off cloud, but the sun was out too - lovely. Emerging from a forest section, a lovely rainbow split the sky: The track wound back onto the northern side of the ridge, this time with views across to Meall Biorach: Back to Kilmahog in time for lunch at the Lade Inn. A dramatic first half to the walk and a beautiful second half, but thoughts are with those who have been affected by these floods.