Bean and I had planned a long weekend in Drumnadrochit with the aim of getting at least one Munro in. The weather was typically "Scottish" and we were lucky not to drown the car on a little exploration walk on the Saturday..... I had my eye on some of the hills in the glens to the West - It is an area we are yet to properly explore but the thought of a wet, snowy, windswept epic was not appealing. Studying the maps and books we settled on a easy solitary Munro in the middle of some very impressive scenery.


our_route.gpx Open full screen  NB: Walkhighlands is not responsible for the accuracy of gpx files in users posts
Fionn Bhienn is called the forgotten hill of the area. It stands alone like an outcast, South of Loch Fannich and the Fannichs massif and East of the mighty Torridonian giants. It translates to English as "White Mountain" so what other time should one make an accent if not in winter?

Setting off from the warm cottage in the dark - fire primed for later - it soon became clear we had picked the best day of our break. By "Best" I mean 40-60mph Westerly winds, snow and hail showers, -2 @900m feeling like -20 with windchill.......great day on hill!

Thankfully we didn't come across any more flooding though we did pass a group of what looked liked Royal Marines going out for a training exercise. The thought of going for a multi day tramp in these conditions was not one I was envious of. We arrived at Achnasheen at just before 9am and I recognised it as a place I once dropped some German hitch-hikers who had a train ticket to Plockton for the following day.

The way up was obvious - signage straight from the road led up to the East of Allt Achadh na Sine to a leveling out at approx 550m. 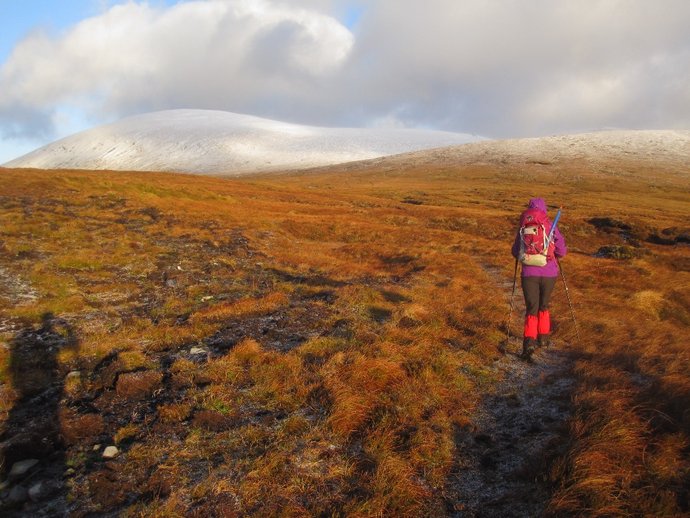 The high winds made for quite a squally day with bright, beautiful winter sunshine lighting up the countryside with a golden/orange hue interjected with hail storms which felt like someone throwing gravel repeatedly at your face. With that in mind, I had a lower level back-up plan of the near-by Graham if either I or Bean decided we didn't like the conditions higher on the hill. For the meantime though, we pushed on higher... Views of Bienn Eighe and the mighty Grey one drifted in and out of cloud and snow showers that rapidly made their way towards us. The atmosphere of the place changed dramatically going from a warm orange glow to a cold blue tinge - the wind never letting you forget that it could take control and dictate your plans for the rest of the day. The photos do not do the wind justice - suffice to say that every now and then a gust would push you off your intended route and your poles would suddenly fly off to be horizontal. We were slower that normal due to the wind and thought a head down direct attack on the summit slopes was our best option. The typical traverse technique was uncomfortable due to the wind so we kept it to our left side and slogged on. On the upper slopes

We stayed away from the edge on the summit ridge. On approach to the summit I had Bean by the arm. I was being pushed around by the wind and her being a good 40kg lighter than me we were worried she might get blown about a bit. We aimed for the summit Trig point where she found safe refuge astride the rime coated concrete. The Fannichs appeared now and then.....looking big. I took a few photos when the clouds would let me, but we didn't stay on the summit for long. Looking to the West we saw the next squall, big, dark and rolling towards us quickly. I took a bearing whilst we had good sight and we donned our new winter googles. Very quickly we were in near whiteout conditions with only the odd wind scoured rock or grassy mound to focus on. We continued on a bearing, stopping a few times to check and re-align. We were aiming for the Sail an Tuim Bhain ridge and knew that if we had the right one, we would eventually hit a wall. Out of the cloud...wall in sight

We hadn't eaten much by this point, just forced down a sandwich whilst puting on our over-trousers. Bean was also getting very cold as we were no longer tramping up hill and were taking our time making sure we were heading in the right direction. We planned to coupy down in the leeward side of the wall though large drifts pushed you past the most sheltered area. We decided we should deploy the bothy shelter and get a warm rest for some food. Hot soup, sandwich, couple more layers and a dry(er) pair of gloves gave big smiles. A couple of happy walkers. One warm, one warming...

20mins later we were following the wall off the hill. The final slog off the lower slopes were wet and the rain was straight into your face....again the googles came in handy.

Back through a small forest and we were walking the 1km or so back along the road to the car. Homeward bound for relaxation in front of the open fire.

the thought of a wet, snowy, windswept epic was not appealing.

Good effort in those conditions though, have had a similar day up it myself

I love the first picture with the vibrant autumn colours on the lower slopes.

It makes one almost believe it was a mild day, but then you see the upper part of the picture. Brrr. Great effort!

That open fire must have been lovely after your walk!

Yeah, the ground was very saturated but the going underfoot wasn't too bad. Although it was wet, windy and snowy - we eliminated the unwanted epic.

The open fire was great - both fell asleep. The colours were wonderful with the low December sun though rest assured it was far from a mild day.

A worthwhile hill if you want a short easy day with some impressive surroundings.

Some great images there. I really like Fionn Bheinn, we too did it under snow. It might not be a particularly interesting route, but the views are fantastic and the relatively short distance allows for a pint before driving home...