Ben Hope by the North ridge

Ben Hope by the North ridge


I did this walk back in August 2012, but decided to post it since I couldn't find any other reports of the North Ridge route and thought it might be interesting to folk considering an alternative approach. The route does require some careful route-finding, especially in poor (aka 'normal') conditions. Some scrambling is involved though most of it can be avoided. Here's my approximate route...

Driving down from Durness, I approached Ben Hope from the North in bright morning sunshine with all the northern hills and lochs at their glorious best. A good start! 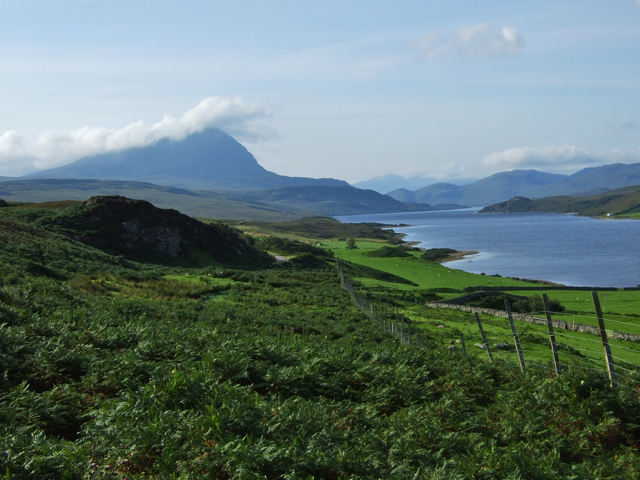 I parked in the car park at Muiseal and followed the gently ascending main path alongside the burn (Allt a ' Mhuiseil) for the first few hundred metres. Where the gradient begins to level off and before the path winds up through the crags, I broke off North... Who needs a map and compass? 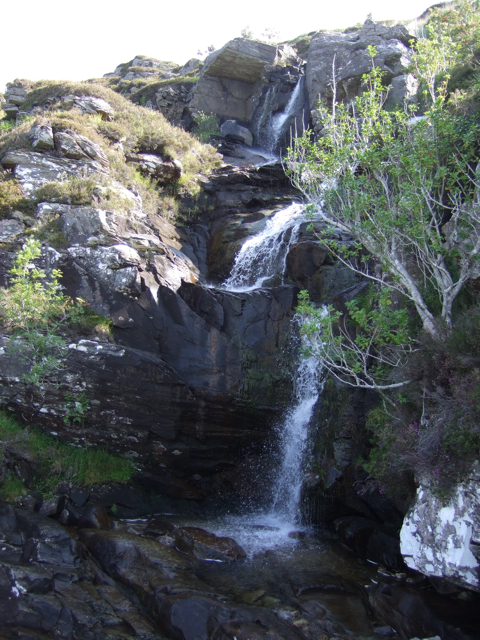 Waterfalls beside the main path

The ground here was the gentlest of slopes, rising just 100m or so in 2km, but was not easy. There were patches of short grass on gravelly ground, but most was tussocky grass that was tedious to tramp through. There were compensations though – great views of Ben Hope's western cliffs, gratuitously embellished with a Golden Eagle soaring along them and a Merlin hunting Meadow Pipits at their feet... Exhilarating! Merlin Rock seemed an auspicious spot to stop for a bite and a slurp... 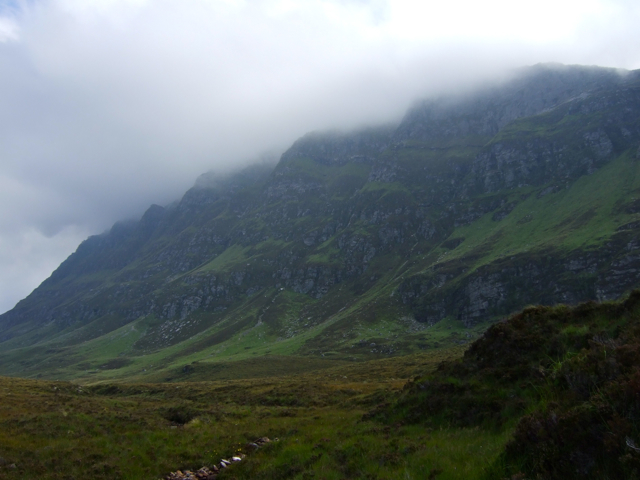 Loins suitably girded, I began to slant across the slopes above Dubh loch na Beinne, meeting at least 6 Common Frogs along the way. Some way past the lochan, a series of gullies suggested promising routes onto the North ridge. Eventually I found one with some scree and fairly steep (but not scarily so) and went straight up. Half way up I became aware of two things. One, clouds were scudding across the sky from the East at an alarming rate of knots; and two, I'd left my precious Silva compass on Merlin Rock. I'd gone too far to retrieve it so, trusting to the simplicity of a North-South ridge ascent followed by a tourist route descent, decided to press on. Onwards and upwards... 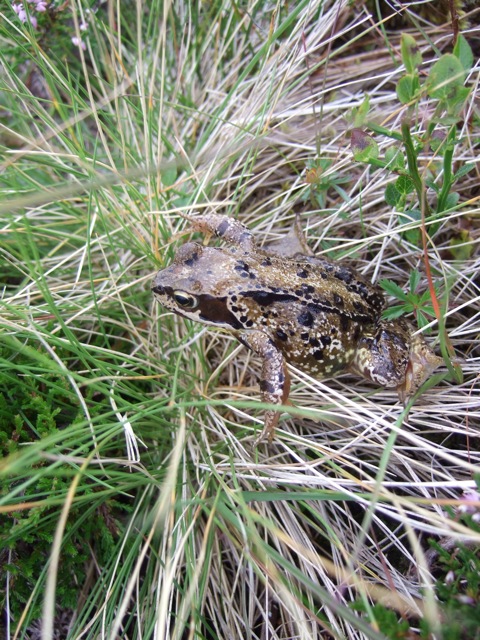 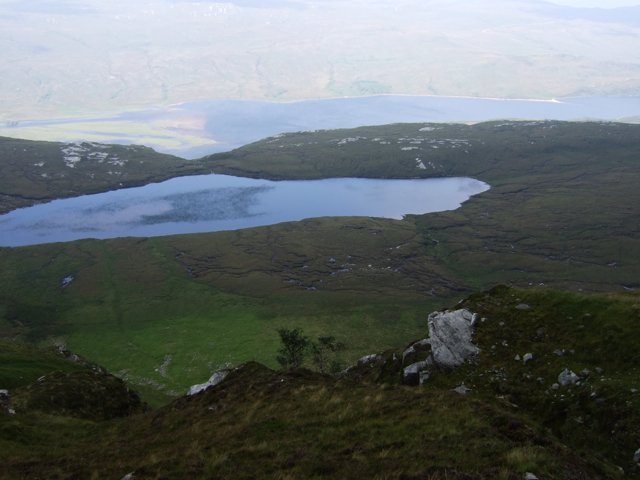 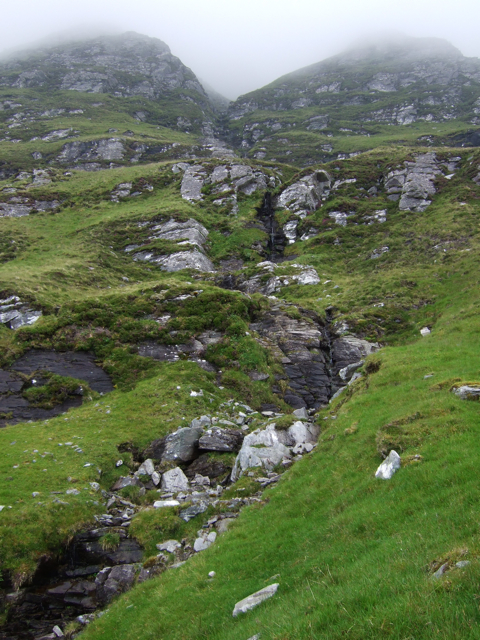 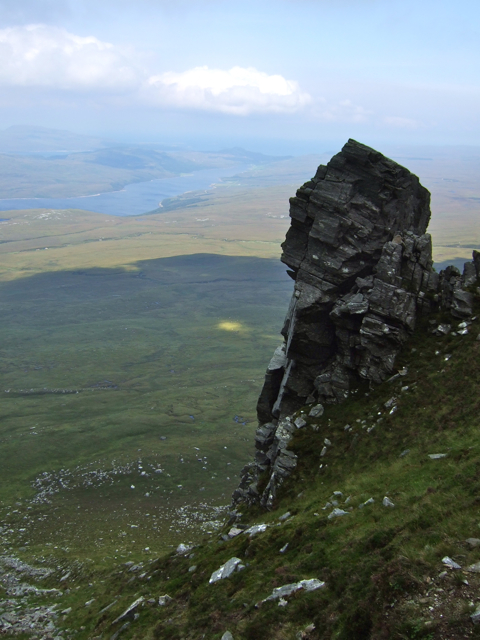 Towards the head of the gully, scrambling opportunities presented themselves which I gleefully accepted. The wind, however, continued to pick up, and before long I reluctantly dropped to the West (sheltered) side of the ridge. Not great going – grassy, steep and wet. As I made my way along, I suddenly heard an alarming loud moaning sound coming from the grass around my feet. It sounded like a braying donkey as much as anything and I couldn't for the life of me think what it could be. To my surprise, a quick search in the grass produced a tiny leveret! I could hardly believe such a small thing could make such a loud noise and, despite having searched online for references to mountain hares producing this call, have failed to find it described elsewhere. Thinking I must have trodden on the wee beast to elicit this bizarre call, I picked it up gently and checked it over. No sign of any damage – so I carefully put it back down. No doubt mummy was somewhere nearby... 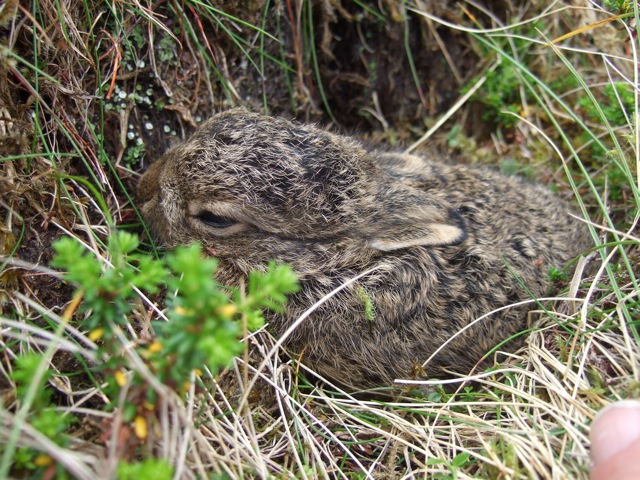 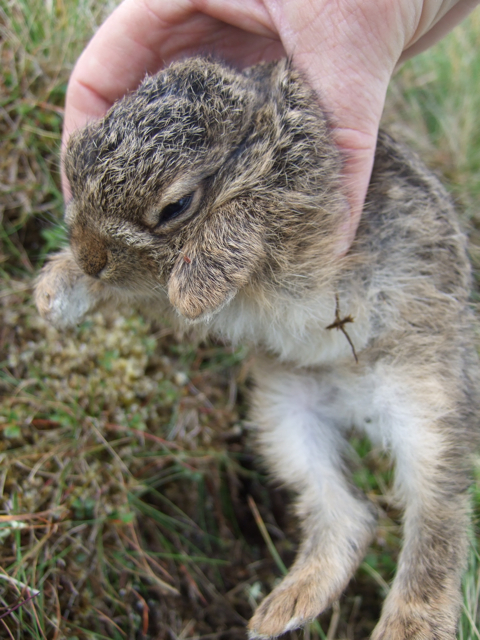 Shortly after this interlude I reached an impasse on the western side of the ridge: a smooth slab of vertical rock. Poking my head over the ridge, and thus from the lee to the full force of the wind, I was somewhat alarmed. The wind had reached extraordinary levels. It didn't come and go, it was just full on, constant and unwavering, thundering like a steam train from East to West – the most powerful I've experienced in the Scottish hills. I dithered for a good five minutes... On a good day I would've tackled the slab. Although there was significant exposure there were sufficient tiny ledges and cracks to make it fall within my capabilities. As it was, however, the slab was wet. Eventually I made the only decision I could and hopped over to the exposed East side of the ridge. It might be very unpleasant for a while, but I would avoid exposed spots and tread carefully. 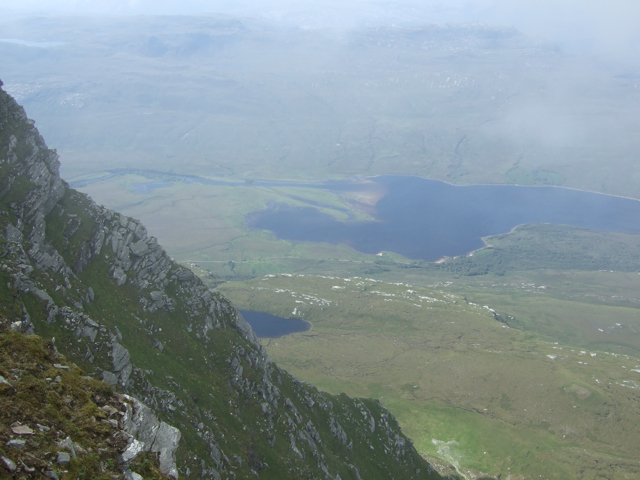 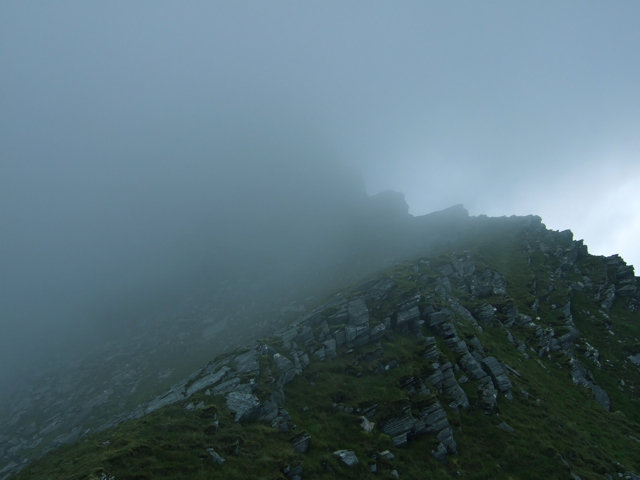 In the mist I'd not realised how close I was to the summit. Before I reached it though, the ridge had one last surprise. In my obscure view of the ridge ahead of me I could see a strange letterbox-shaped gap. I couldn't tell how far away it was, nor, for the second time that day, did I have the foggiest (sorry!) idea what I was encountering. Pressing on, it gradually resolved into, not a gap, but a great projecting cantilever of rock sticking out from the ridge. It was impressive; from memory projecting about 4m or so from the ridge, and reminiscent of the cantilever rock on the Glyders in North Wales. Once again, I've failed to find reference to this feature elsewhere. From there the summit was a short hop away and, after dutifully patting the summit trig point, I gratefully joined fellow waifs Martin (?) and his young black labrador, sheltering in the lee of a summit wall. 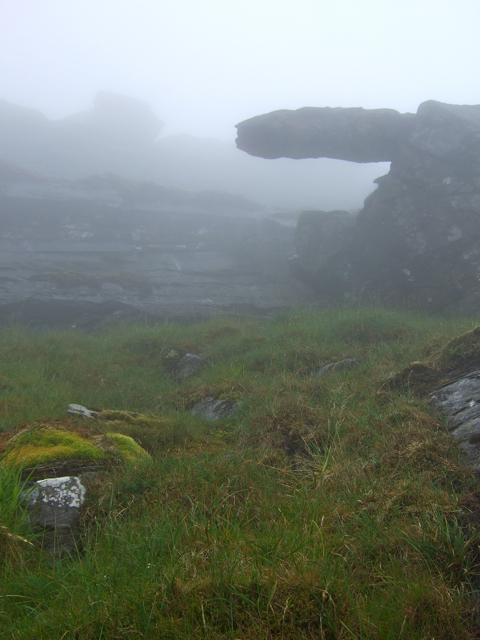 Not a black hole but a black...finger! 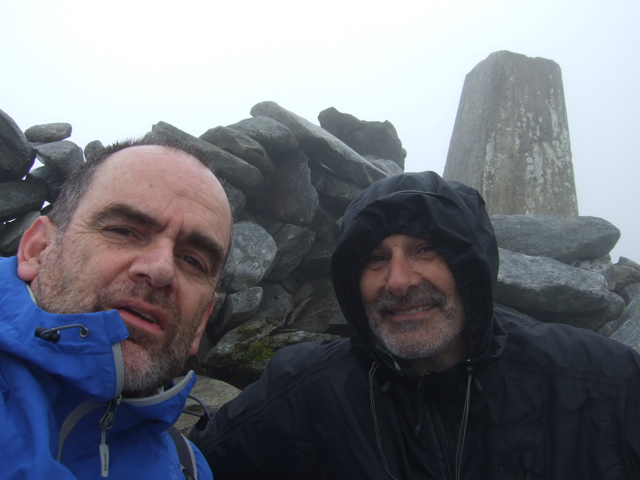 A cup of tea and a Yorkie bar later, it was South, down the broad, gently descending, tundra-like shoulder of the tourist route. I'd hoped for a spot of birdwatching along this promising section, but other than a covey of three Ptarmigan that exploded from in front of my feet, there was to be no birding on a day like this! Our feathered friends were all tucked away in cosy, sheltered nooks and crannies. (And men talk of 'birdbrains'...) So, a rapid descent back to the car – a weathered, but exhilarated and very very grateful return. 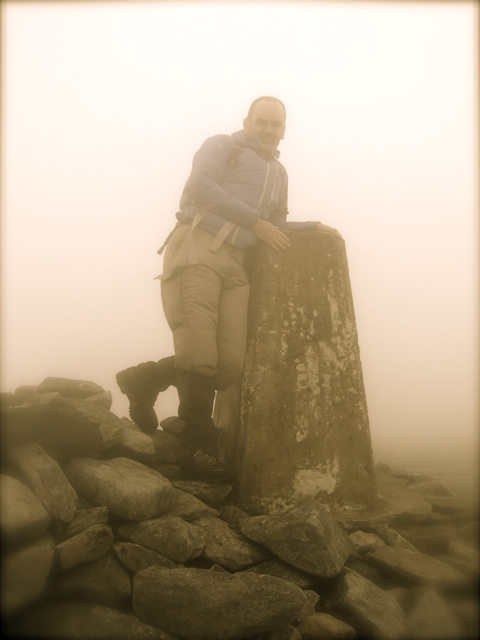 Re: Ben Hope by the North ridge

Re: Ben Hope by the North ridge

We did it the other way around. The exposed slab on the crest of the ridge looked maybe doable but ridiculously exposed even in fair weather, and not a good choice for descent! We descended an easy scrambly path & short gully on the east of the ridge, returning to the crest and easier terrain below the slabby bit. As you say, there are few references to this route.

It really made the day to do a circular route on this hill.