Swimming in snow on Carn an Fhreiceadain

Swimming in snow on Carn an Fhreiceadain


We missed last weekend on the hills due to cr*p weather. Nothing unusual this time of the year, but I was counting on one more wintry walk before Christmas. Next weekend will be impossible to organize anything, due to festive preparations, so this was the last chance to grab some snow

Well, we got the latter in abundance

Having enjoyed Geal Charn in white, I thought about a similar walk a bit further down the A9, Carn an Fhreiceadain from Kingussie. We had done it before in summertime, as an afternoon stroll. We only took one rucksack and I didn't even bother to dress up like a proper hillwalker, apart from boots. I remembered the whole circular was on a good, wide track and could be completed in 4 hours. All right, five hours for winter conditions. Ha, ha ha, if only I had known...

We arrived in Kingussie about 9 in the morning, the Gynack Road car park was deserted and very icy, I stepped out of the car and immediately started to dance my "stand-up-straight-fight-for-survival" routine

Plenty of space for Black Arrow:

Our plan was to follow WH route, up the eastern track first, to Beinn Bhreac then to the summit, and down the slopes of Meall Unaig and along Allt Mor back to Kingussie. Simples.

Track_KINGUSSIE 14-12-15.gpx Open full screen  NB: Walkhighlands is not responsible for the accuracy of gpx files in users posts
As we reached the track crossing the golf course, we encountered some black ice on the tarmac. We slowed down and carefully picked our way, to avoid any unpleasant meetings with the hard surface. 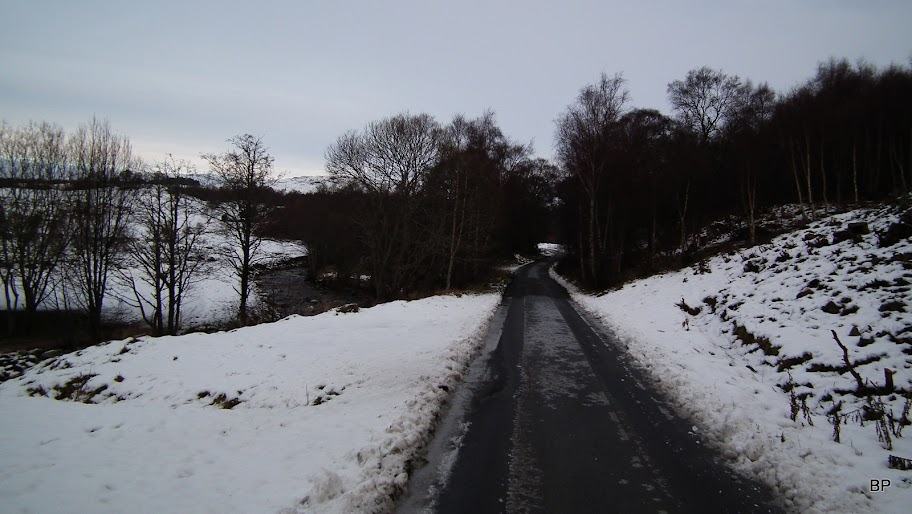 There used to be two bridges by Pitmain Lodge, but one is gone (most likely washed out by flood) and a new one is being constructed. The existing bridge in front of the lodge has big signs "private, no trespassing blah blah", but at the moment the owners have to put up with hillwakers passing in front of the building, as there is no other way of crossing the river.
Bridge under construction:

We didn't cross the bridge, leaving that for the return option, instead we carried straight up through the forest. Ice has already given way to snow and I could smell a wintry adventure!
Soon we spotted the gate giving access to the open hillside: 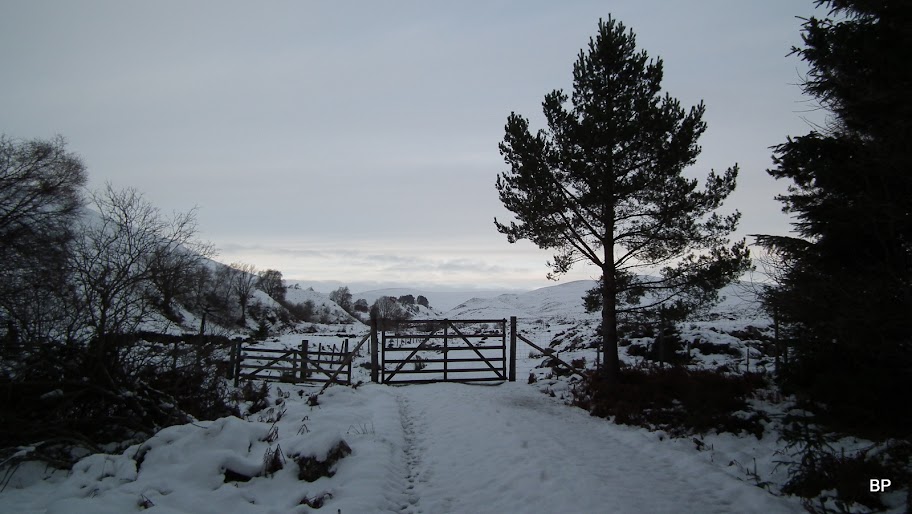 Wow, winter wonderland!!! As soon as we left the trees behind, we found ourselves in a perfect sepia world. 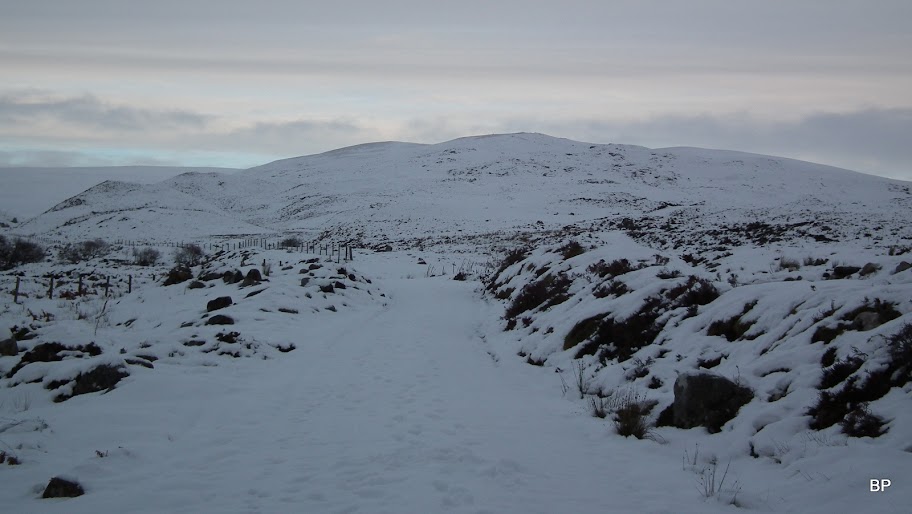 Looking back to Kingussie and Glen Gynack, conditions looked gloomy and very depressing, low cloud in the southern sky...

...but in front of us, the first glimpse of good weather spell showed up. I was grinning - yes, it's going to be a fantastic day!

Kevin's camera refused to cooperate - what a surprise... But having learned from our previous wintry experience, he carried two sets of spares and luckily, one of them worked 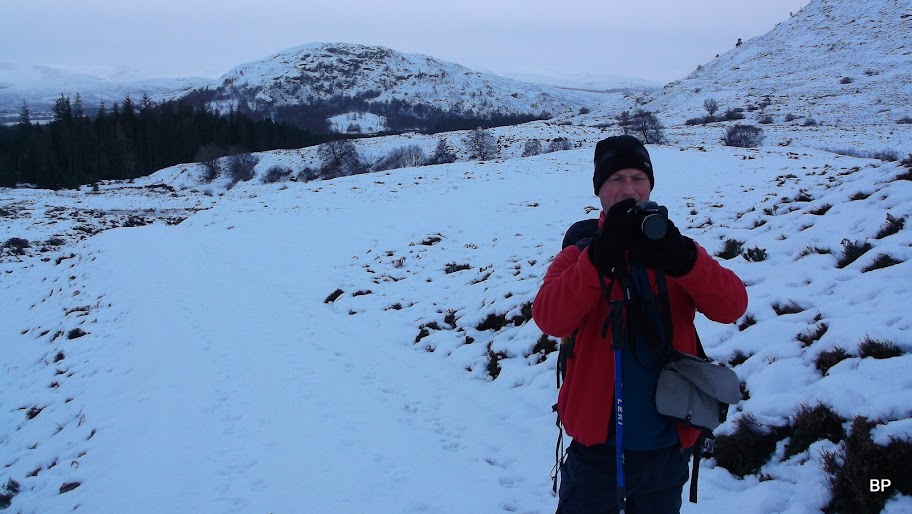 At the moment, the colour of sky was similar to the colour of snow, resulting in very bland photos, like this one, to the west, showing the crest of Creag Dhubh:

But thankfully, better weather was developing as we pushed on, blue sky above and next to no wind. Perfect conditions for walking!

We met two walkers who had climbed up as far as the wee bothy. Up to this point, snow on the track wasn't much of an obstacle:

... but as soon as we left the bothy behind, we entered the area of "virgin" snowdrifts. The track was now filled with the white stuff and we had to walk on the embankment to avoid sinking up to our knees...

...albeit the latter was impossible to avoid. My muscles began to ache, but at the moment I was still giggling: 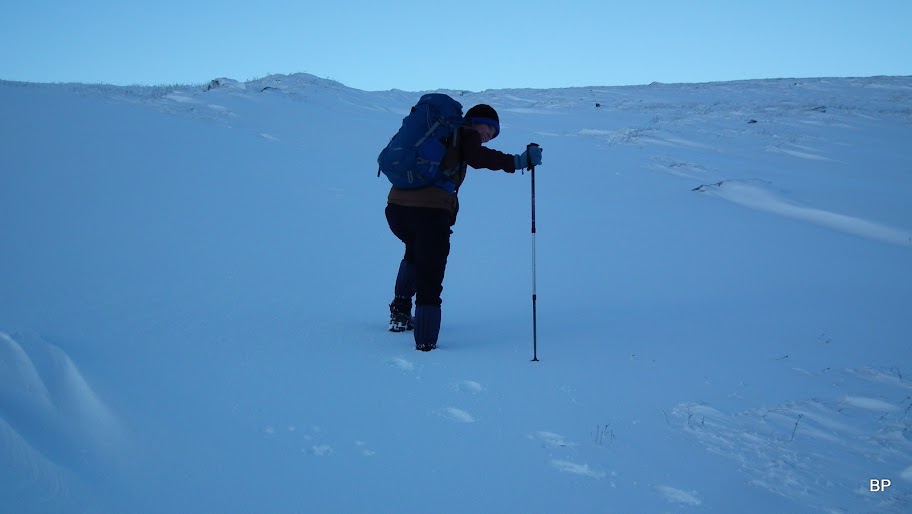 Our hard work was rewarded with wonderful views, as we witnessed the world transforming from dull grey to lovely blue... We took every opportunity to snap photos and took far too many breaks. Well, to be honest, every excuse was good to stop and catch a breath. A few snaps portraying the transformation...
Looking down the track (the bothy can be seen to the left of the picture) with dull sun still hidden behind high cloud, the Cairngorms still in clag: 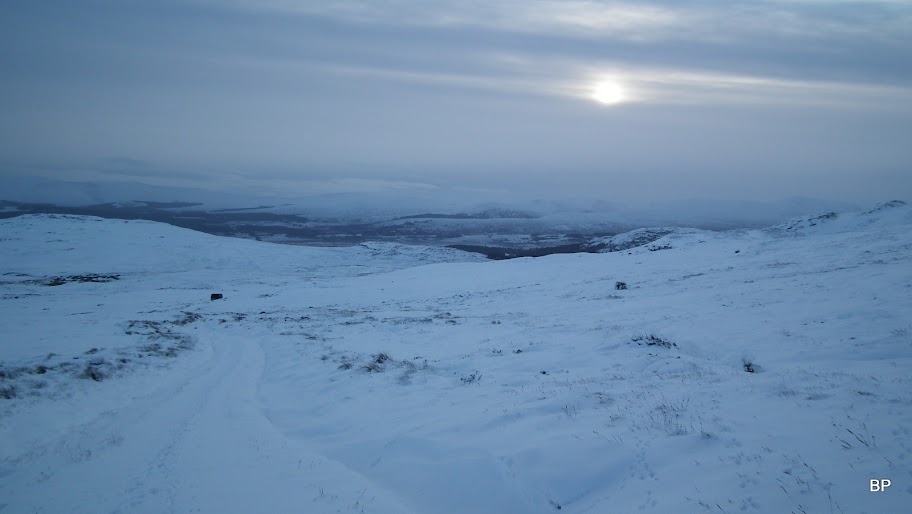 The "border" between good and bad:

As we climbed up, the track became next to impossible... We were drowning in the white stuff! 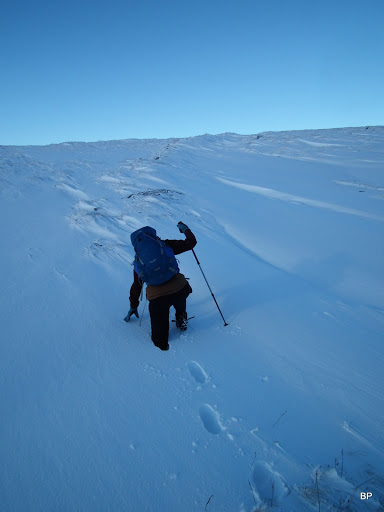 We were so annoyed with the track that we stepped off it and walked alongside on the vegetation, which was a wee bit easier but we didn't avoid incidents. Kevin stepped into a stream hidden under the snow, luckily water didn't get into his boots. No photo of this incident as I was busy pulling him out of the white trap

Near the top of Beinn Bhreac, we saw the full western panorama for the first time - wow, what a reward for all the snow swimming!

We encountered many mountain hares on the way up, most of them spotted us quickly and skipped away. We managed to snap a few decent portraits (as much as we could without large zoom SLR camera), I posted them in wildlife section here:
http://www.walkhighlands.co.uk/Forum/viewtopic.php?f=3&t=58497
Walking became easier again as on flatter ground we could avoid the snowdrifts: 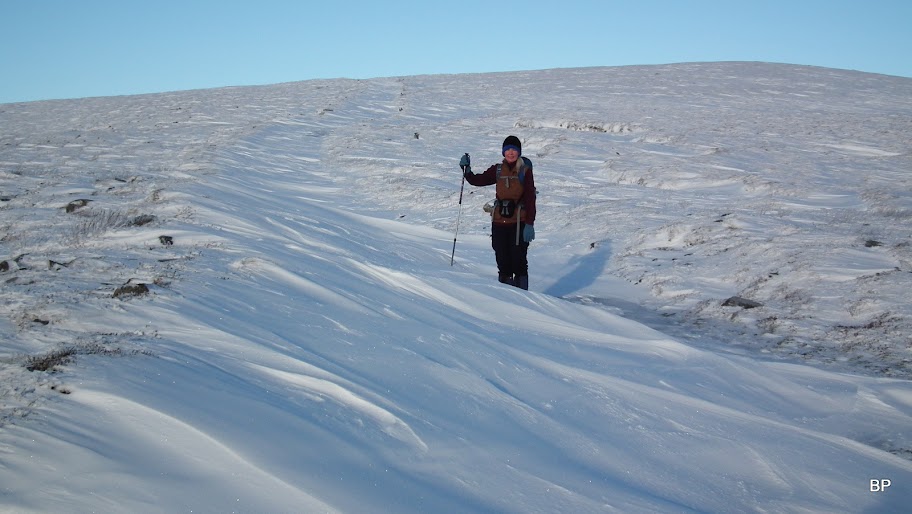 There is one positive aspect of snowdrifts - they make a great background for "winter wonderland" pictures: 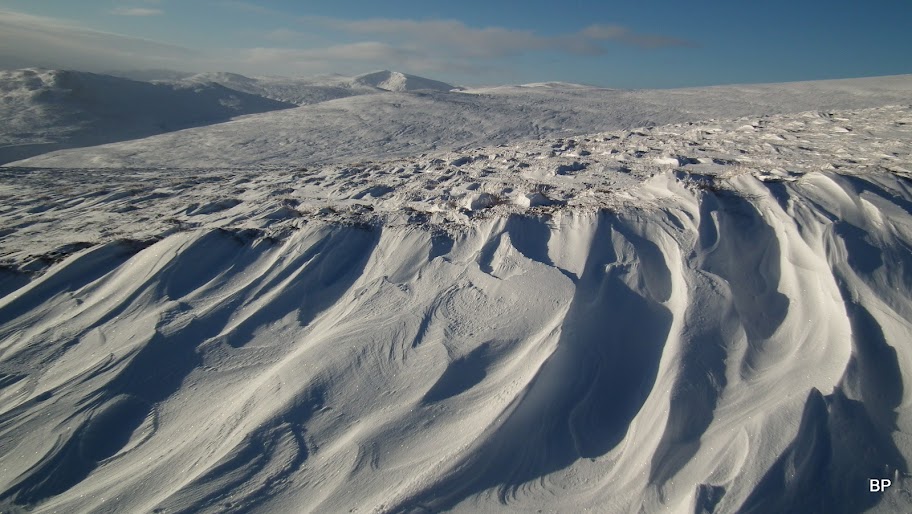 About 60m below the top of Beinn Bhreac we walked into the wind-swept area, where the track was almost free of snow: 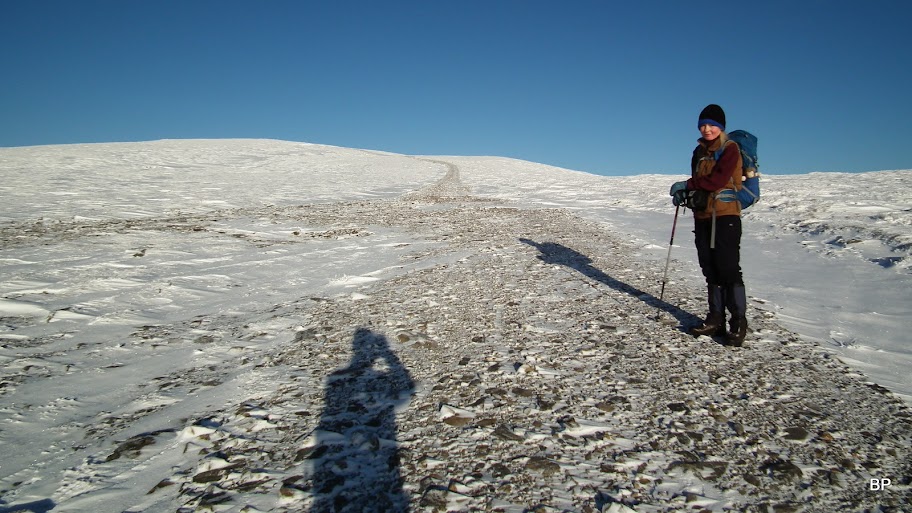 Five minutes later we touched the cairn of Beinn Bhreac. We stopped for a short while, enjoying the beauty of the winter wonderland around...

...and south to the Monadhliath:

We spotted another hillwalker by the summit cairn (not visible in this photo, he was doing the circuit clockwise):

The traverse from Beinn Bhreac to the Corbett summit was now easy, with the track mostly snowdrift-free and with next to no wind, it was a pleasant stroll: 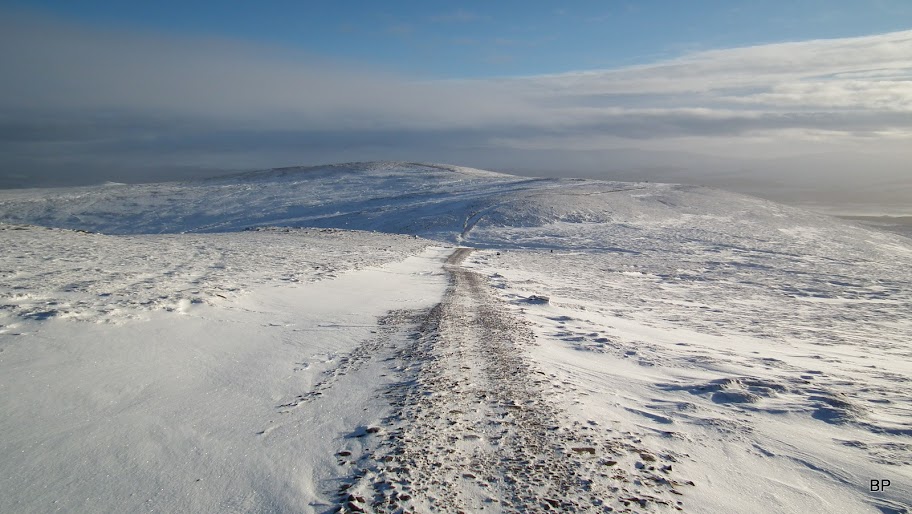 We counted we still had about 3 hours of daylight left, so no need to hurry and as weather was so good we couldn't resist enjoying this magic landscape for a wee bit longer...

Having reached the summit, we spent some time taking photos and videos. It was a blissful moment...

Lucy on the summit of her 17th Corbett. Last time she complained about cold bum, so now she is all suited up for winter conditions!

A repeat Corbett for us, but I'm not fussy about statistics. It was worth to revisit this hill in winter conditions

We have beaten our record in Corbett climbing per year, clicking 25 Corbetts in 2015. We might add something more if Christmas weather allows us to venture out onto the hills again.

One mountain on the horizon and one sticky-uppy thingie nearby 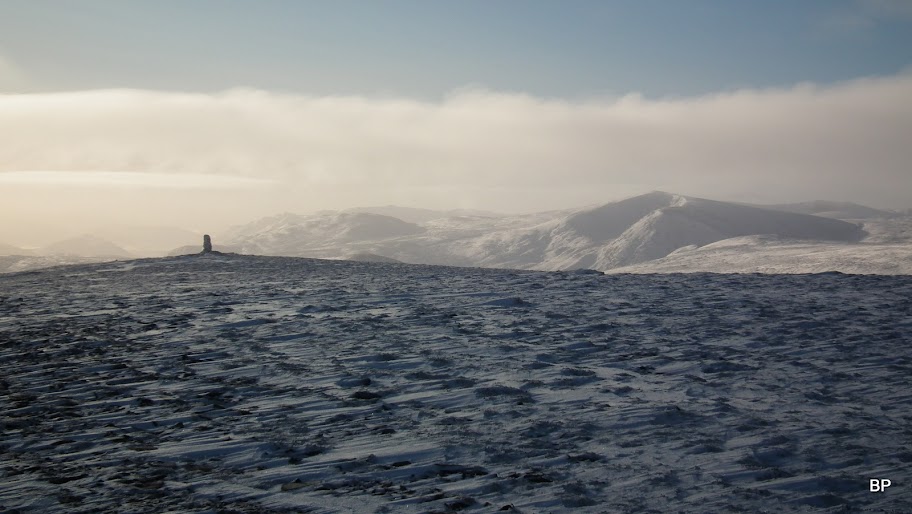 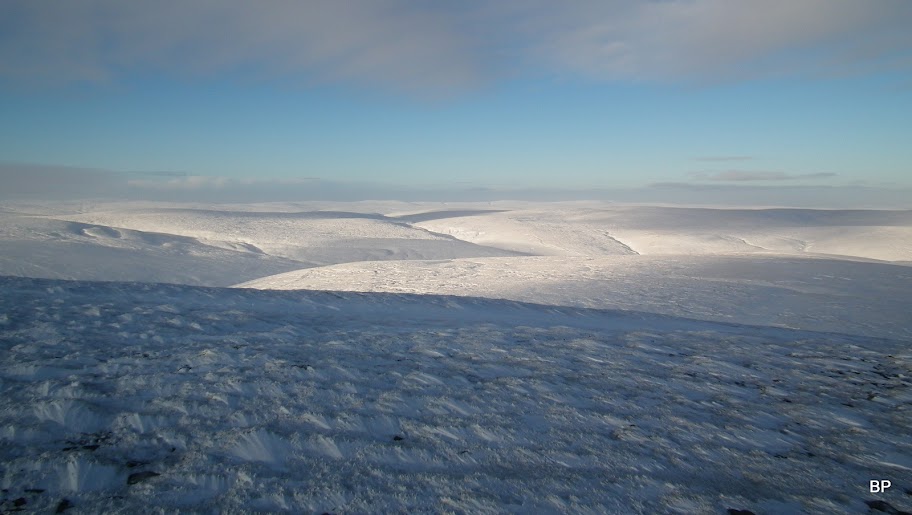 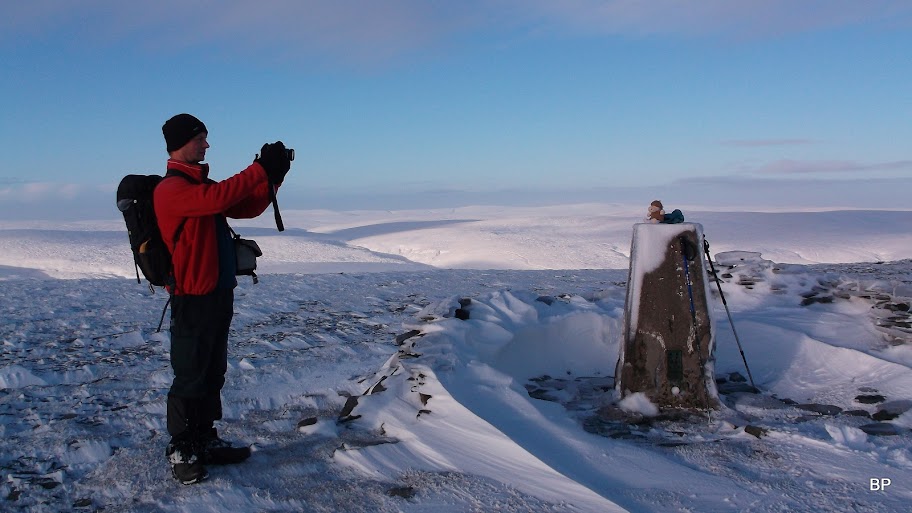 The Cairngorms beginning to emerge: 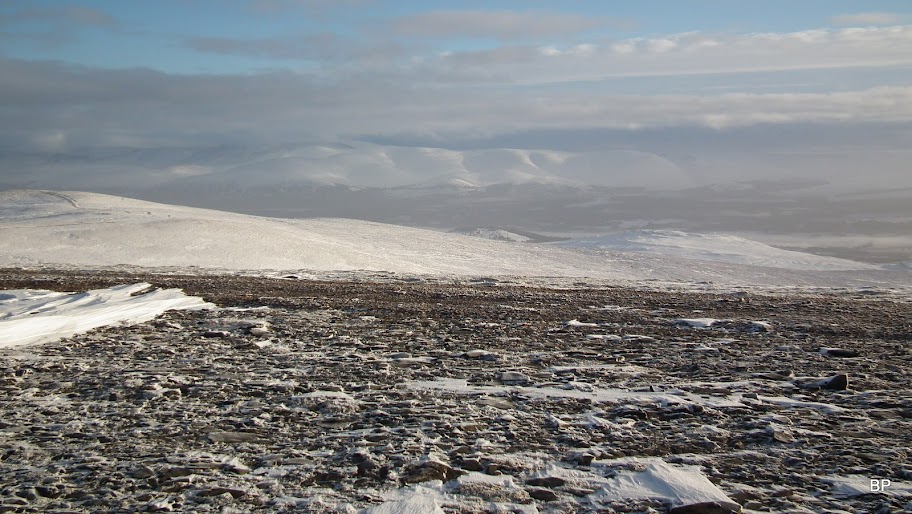 After a hot cup of tea by the trig point, we packed up and started to descend by the western side of the hill. At first, it was easy walking with superb views and in glorious sunshine:

Three walkers on the track below Beinn Bhreac:

Having descended maybe 100m, we encountered the very same problem as on the way up. The track was now filled with fresh snow and we had to slow down and pick our way carefully:

OK, it was slow but no complaints from my side. It gave us more time to enjoy the surrounding panos... 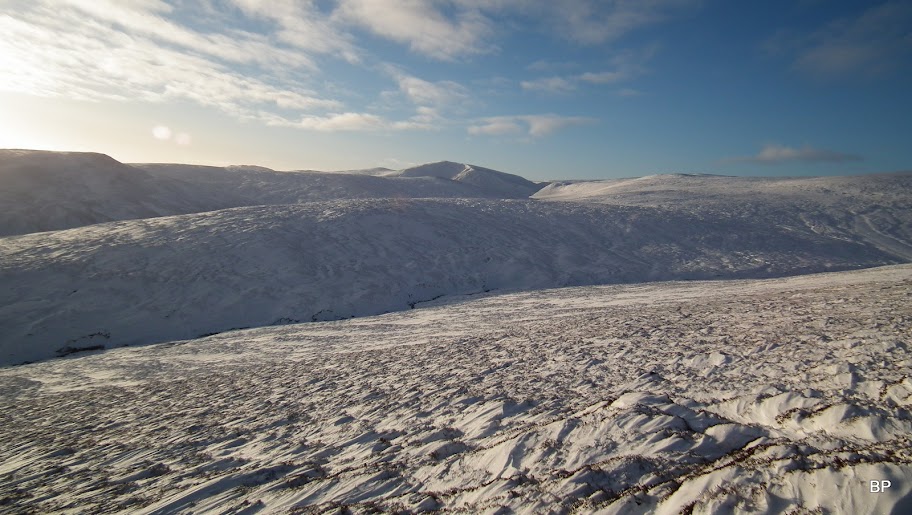 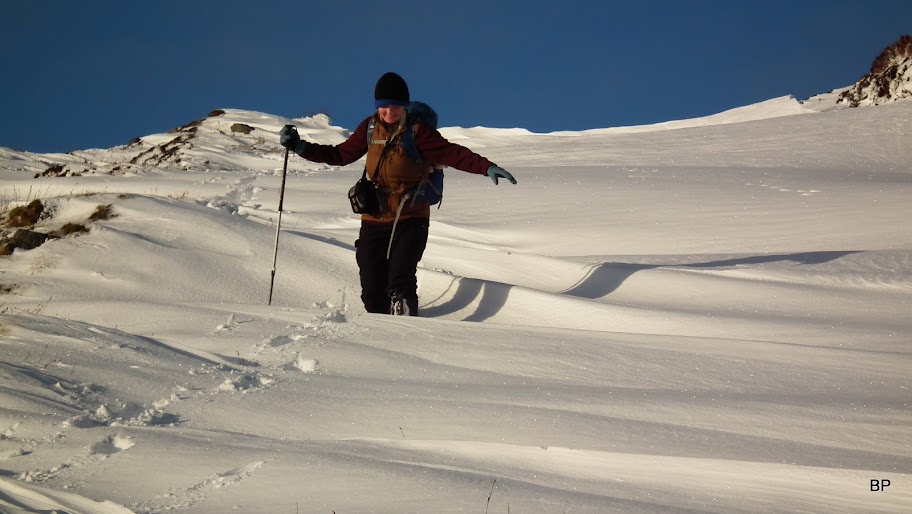 The edge of the track was the safest place to be:

Allt Mor and the Cairngorms on the horizon:

The sun was slowly setting and the world slowly fell into shadows... 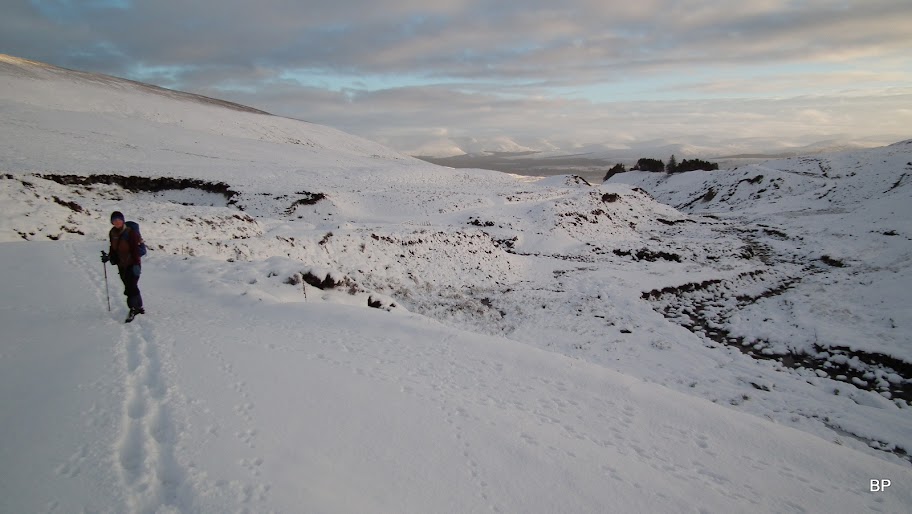 Taken from the wee bridge over Allt Mor:

Just before the sunset, the Cairngorms shook off the remnants of clag and stood proud in evening light: 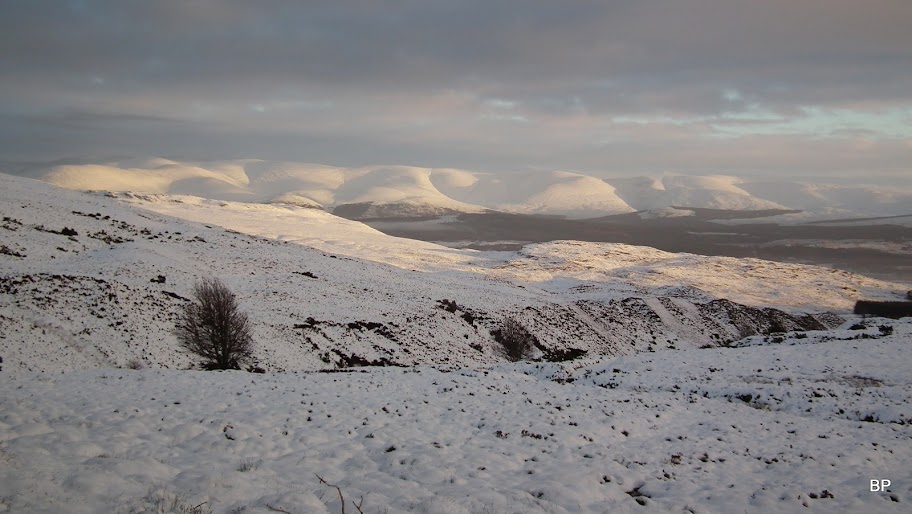 We might not have such conditions for Christmas, as forecast says a warm spell is coming

so we enjoyed the snow as long as it lasted

The track took us all the way back to Pitmain Lodge, from there we retraced our steps to the car park. The tarmac was even icier on the way back and we struggled to stay upright

We returned to the car after 6.5 hours - ridiculous time for this circuit but to hell with Mr Naismith. As long as we enjoy it, the time doesn't matter

Nice blue skies for most of the way then BP, love the snow architecture photographs

Ooft that looked hard work! But so worth it for those wonderful winter views. Magic indeed!

What a lot of the white stuff. Interesting about Kevin's camera as it was on this same route my camera went on strike too!

It was a hard work out, but we loved it!

Hope you have recovered by now

I had sore muscles for two days afterwards

dogplodder wrote:it was on this same route my camera went on strike too!

Carn an Fhreiceadain camera curse?...
Our old rechargeable batteries need changing, they can only be reloaded a certain number of times, then they simply don't hold the charge any more.

Shame this weekend is a blow-out, but just as well, we will be busy shopping for Xmass gifts, dressing up the tree ect.

Great photos, nice when you get a good view when everywhere covered in white, especially after a bit of hard work.