Sod's Law on Norman's - what happened to the sun?

Sod's Law on Norman's - what happened to the sun?


After another rainy and windy week, we were happy to see a cold, but sunny and calm weather forecast for Saturday north of the Central Belt. With snow on higher ground we opted for Norman's Law in Fife.


normans-law.gpx Open full screen  NB: Walkhighlands is not responsible for the accuracy of gpx files in users posts

We arrived in Luthrie shortly after 10am. We'd been here a few years ago, on another cold, crisp winter weekend. Unfortunately that time, after walking the first mile to Carphin Farm, we bumped into a large shooting party unpacking from a convoy of cars and trucks for their annual shoot. "You need to come back another day - you wouldn't want to get shot, now!" The cheek!

Cows watched us intently, mooing loudly as we set off from the village. On walking towards the farm we were dismayed to hear shots ringing out from the hills ahead. Surely we hadn't managed to pick the same weekend again?! This time though, thanks to our later start, no-one was at the farm to turn us around. The weather wasn't as good as last time (or as forecast) though, with overcast skies and dull light. Nevertheless some good views opened up as the track climbed north of Carphin Farm, with a few muddy sections that hadn't quite frozen over, especially around gates. Good boots definitely required. As the gradient eased we branched right, off the track onto a clear path. The next section to the summit was the best part of the walk, with small crags and wooded areas adding variety alongside a pleasant path. During the last 500 metres or so to the summit, our climb was accompanied by one, then two, owls hunting above the surrounding slopes - we think short-eared owls, but the photos we got are pretty blurry. They were visible on and off all the way to the top, and back down. Additionally to the owls, there was a fox running amok amongst a field of sheep to the north, overlooked by the summit. Views over Fife, the Firth of Tay, Angus and eventually the Lomond Hills were good from the ascent, but we were still missing the sun! Clearer skies were visible to the north. 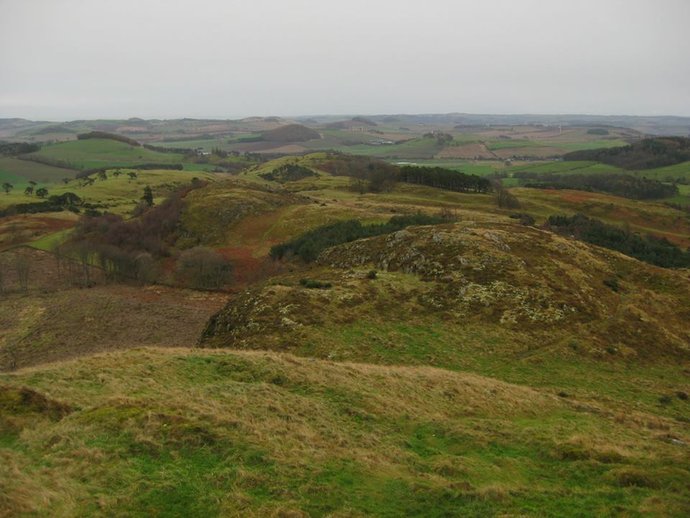 Tay and the Lomond Hills (with a dusting of snow) from the trig point: Returning along the last 500 metres of path back to the bealach and track crossing, we then turned south to follow the walkhighlands return leg. This was fine at first, but the track disappeared completely where it's supposed to double back on itself by the arrow sign and gorse bush, leaving a short pathless section. Fortunately it wasn't that wet underfoot, but we were pleased to get to the open field beyond the next gate. We could hear more gunfire at this stage, but it seemed a little way off. Continuing downhill brought us to the path heading back east around the base of Whirly Kips - a little more ascent here before it descends back towards Luthrie. A little unwelcome rain began to fall - so much for sunshine.

One of Norman's Law's shapelier sides is visible from the return path / track, beyond a field of cows: The weather disappointed today, but some unexpected wildlife made for an interesting walk, although we might return by the ascent route if we were to come again. Bonus: we didn't get shot...

Re: Sod's Law on Norman's - what happened to the sun?

RTC wrote:Really enjoyed the photos. Norman's Law is one of my favourite lower hills.

Re: Sod's Law on Norman's - what happened to the sun?

Did this walk about 20 years ago when we lived in Dundee. Nice to see it again!