No white Christmas this year

but there is always solution if you live in Scotland. We heard that the far north had recently seen some fresh snow on higher ground, so guess where we went

We were torn between Beinn a'Chearcaill and Sail Mhor - both relatively easy walks and both with fantastic vistas to magnificent mountains. The former hill won for two reasons: it would be a new climb for both of us (we had already done Sail Mhor albeit a long time ago) and it was situated next to my favourite hill, Beinn Eighe.

Most years we pay a visit to Corrie Mhic Fhearchair, usually in winter/spring time, there is something enchanting about the Triple Buttress... In 2015 we didn't climb Beinn Eighe, but studied the famous corrie from the summit of Beinn an Eoin. Beinn a'Chearcaill was said to be even better vantage spot plus now it would be in winter conditions. What more could we ask for?...

Boxing Day was wet, but Sunday looked like we were in with a chance for decent weather, so we didn't waste our time. Days are so short in December that even a half-day walk should be considered as a full-day climb. We packed all our equipment including crampons and extra layers of warm clothes - the latter proved useful!
The starting point can be a bit problematic. There is enough space for one car at the entrance of a track (962680) a short distance up the road (A832) from the buildings by Bridge of Grudie. Luckily we were the only visitors to this route today.
Even from the road, views were spectacular. Across Loch Maree, Beinn Lair and Beinn Airigh Charr reminded us, that there is still uncharted territory for us to explore... 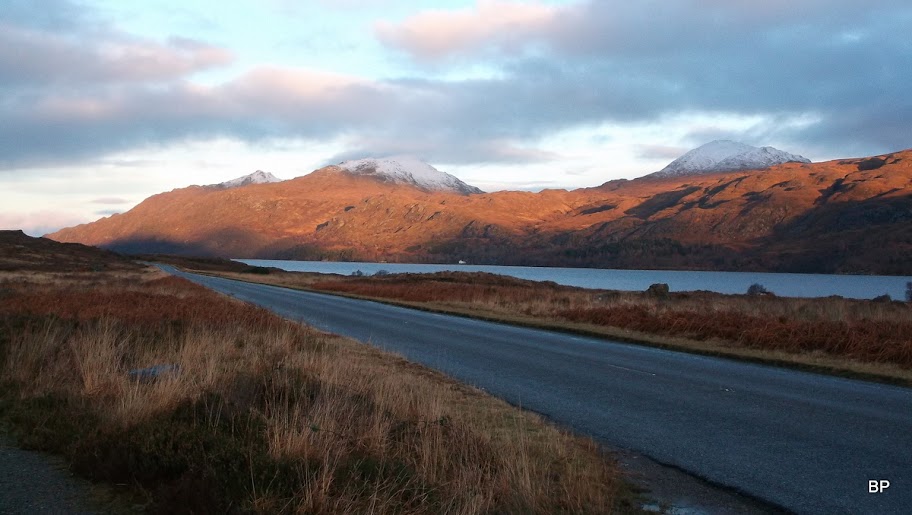 Our walk follows suggestions from Graham Guides (both books describe the same route). On a longer day, or with less snow higher up on the ridge, we would certainly be tempted by outlying tops (A'Choineag Beag and Creag na Feol), but in current conditions and with stomachs full of festive cakes, we carefully stuck to the easiest choice, up-and-down Coire Briste:

Track_BEIN A CHEARCAILL 28-12-15.gpx Open full screen  NB: Walkhighlands is not responsible for the accuracy of gpx files in users posts
The beginning of the stalker's path is a bit tricky to find. We managed to locate it after a few minutes of exploring the local bogs

Once on the path, it was easy walking, at least for a time being. The air was fresh, the sky was blue (so far) and we were both in good moods. My body really needed a good dollop of exercise after a weekend full of mince pies, poppy-seed strudel, cheesecake, chestnuts, chocolate and other Christmas delights...
Looking back to the road and the hills across Loch Maree: 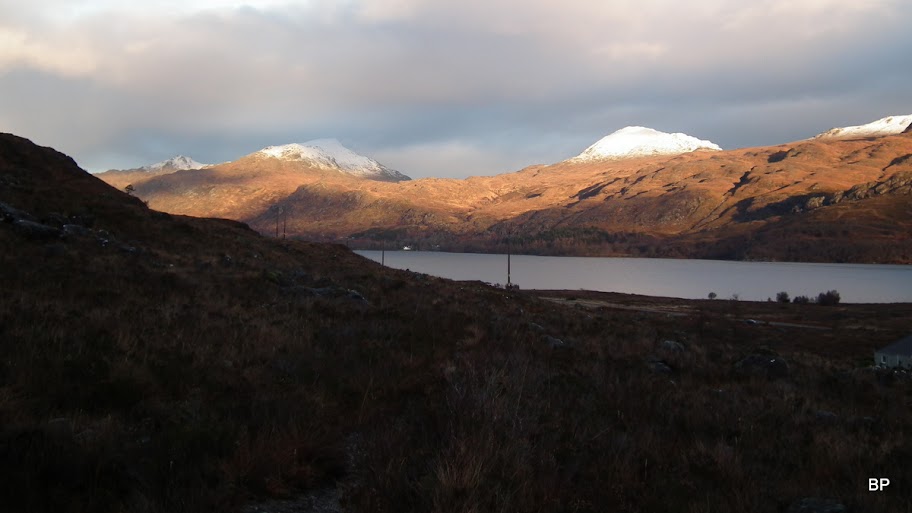 Slioch again, as beautiful and majestic as it can be: 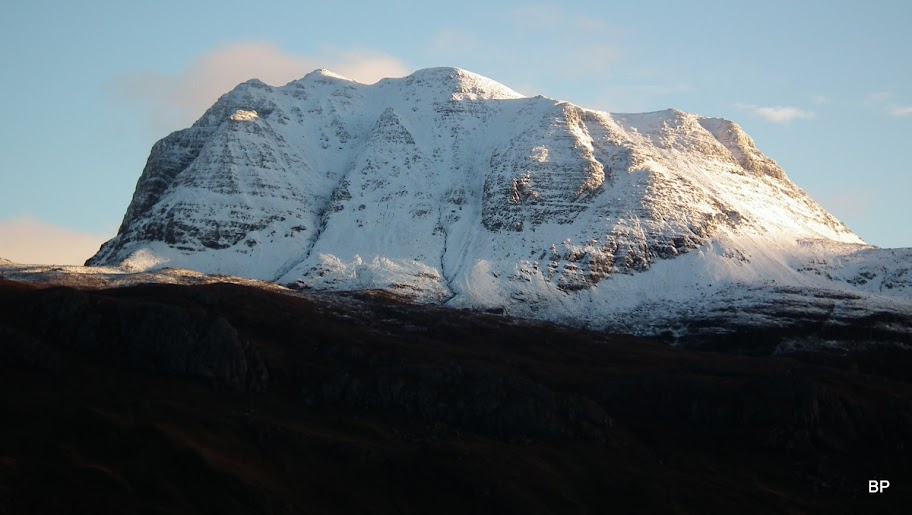 The path is well defined and we could now see Beinn Eighe tops, Ruadh Stac Mhor and Sail Mhor:

After about 2 km, we located the cairn, marking the start of another path, this one ascending Coire Briste. As soon as we started gaining height, the terrain became wet. The recent warm, rainy weather turned this path into a muddy stream

At least views behind us were well worth the effort. Here is one photo I tampered with a little using Picasa program - a perfect desktop snap: 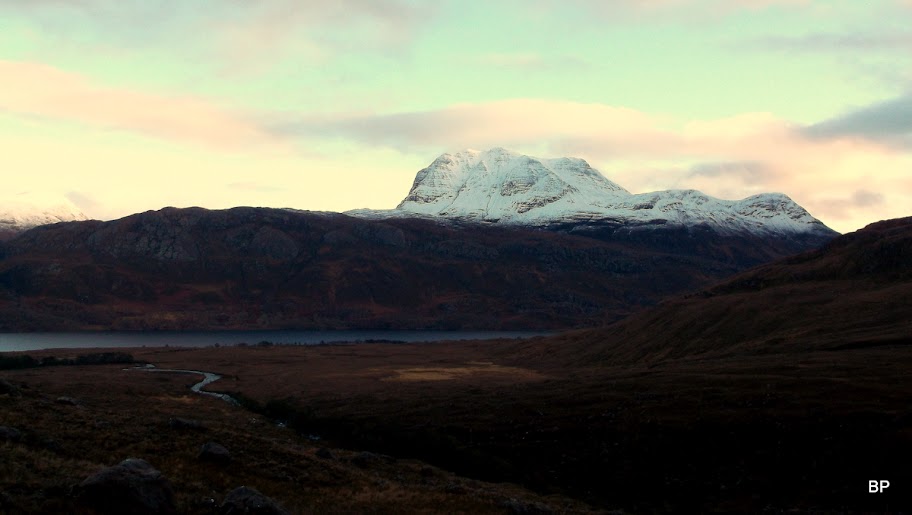 Kevin was first to notice that grey cloud was now coming in from the south-west and it has already embraced Beinn Eighe... Grrrr!!! And we had such high hopes for a clear summit:

The cloud was patchy and to our amusement, it toyed with mountain tops, creating some really breathtaking shapes and shadows: 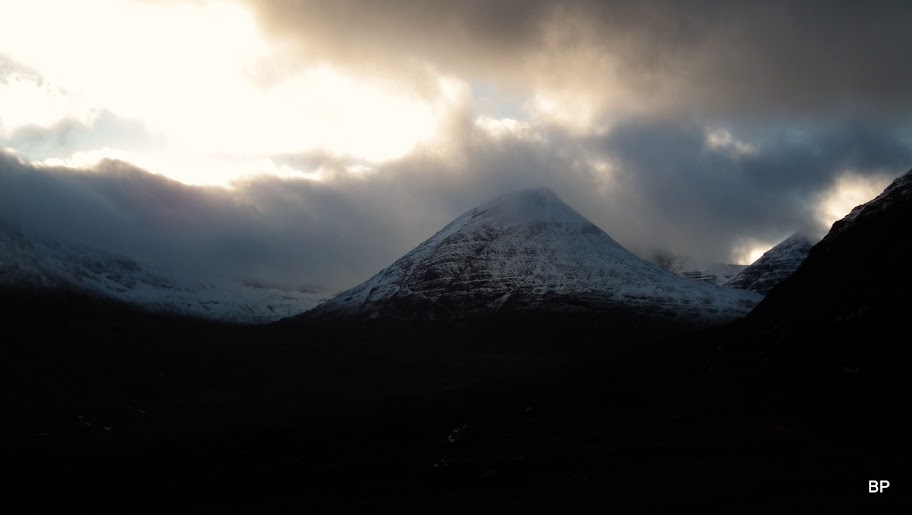 We kept fingers crossed for a clear summit and pushed on. I believe any other time of the year this path would be a pleasure to walk on, but not today. You should see us mud-balancing and tuft jumping

When we reached the top of Coire Briste, we uttered a sigh of relief. Hopefully on the snow it will be easier walking, I thought, but silly me, I was so wrong

But for a time being we stopped to admire the views back into the corrie: 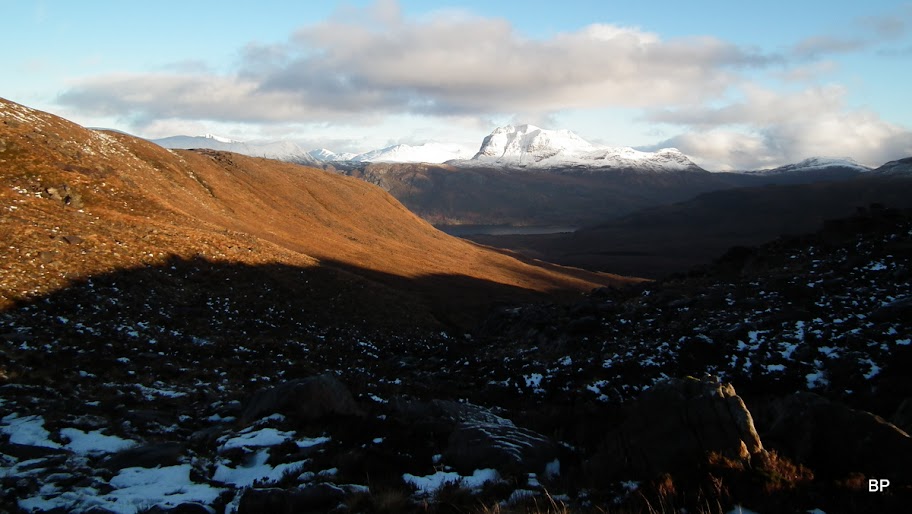 A few details of Fisherfield peaks, with cloud here and there: 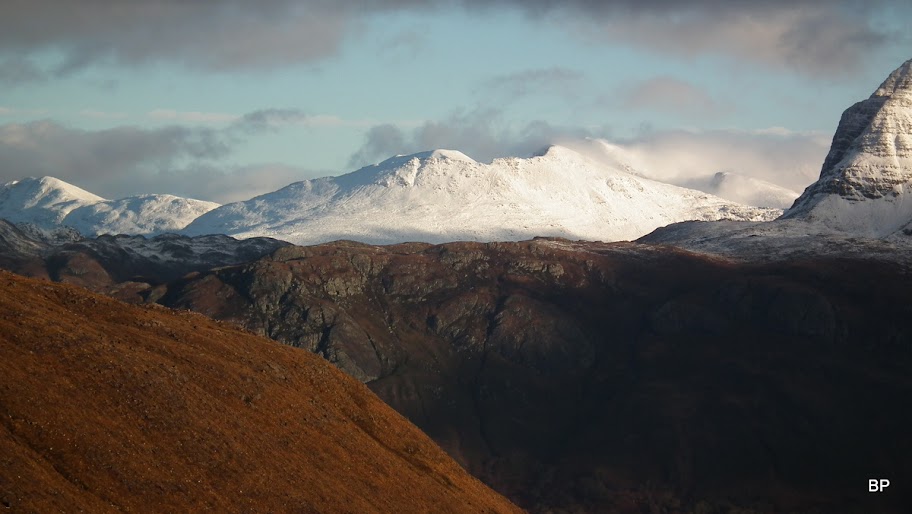 We followed the stream up to a small lochan (one of many, in thick cloud this area could be very confusing) and eyed the slope we were about to climb. Hmmm.... 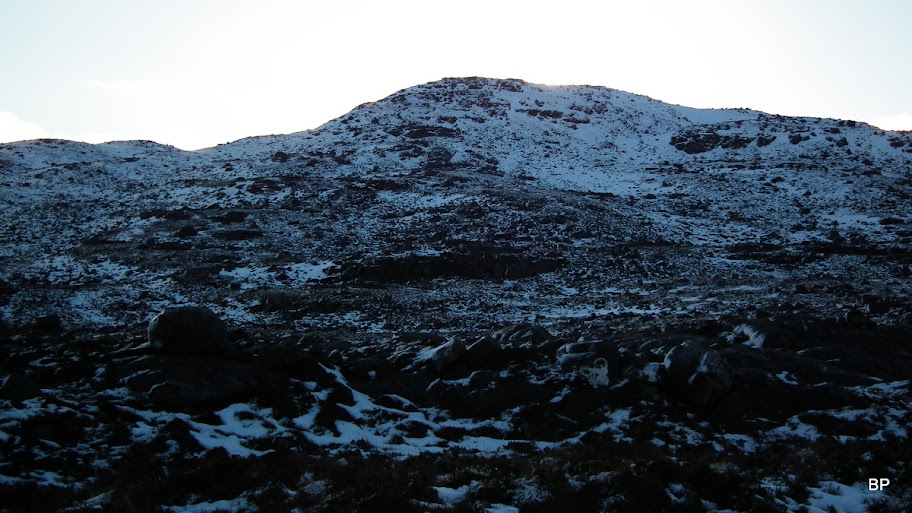 From the picture it may seem that there wasn't too much snow on the ascent route, but as soon as we reached the steeper section, we started to sink up to our knees in places. At the moment we found it entertaining and giggled a lot, trying to find the best way 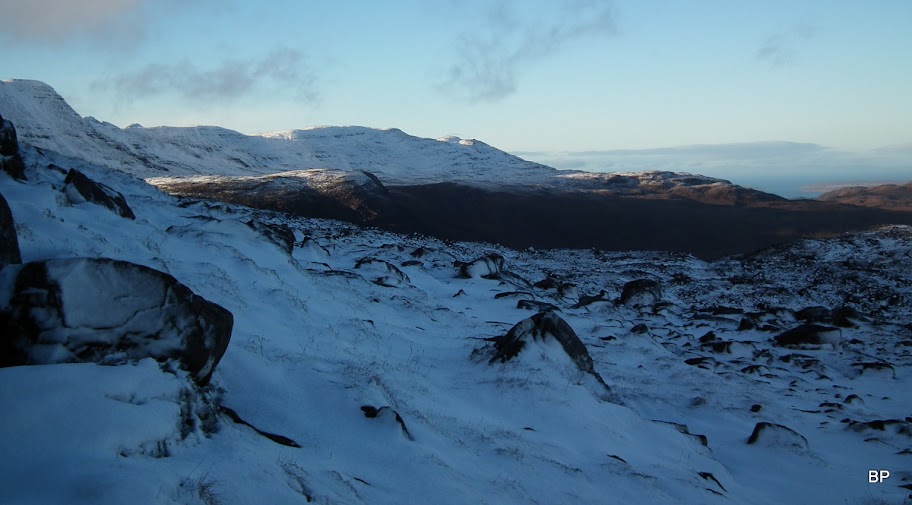 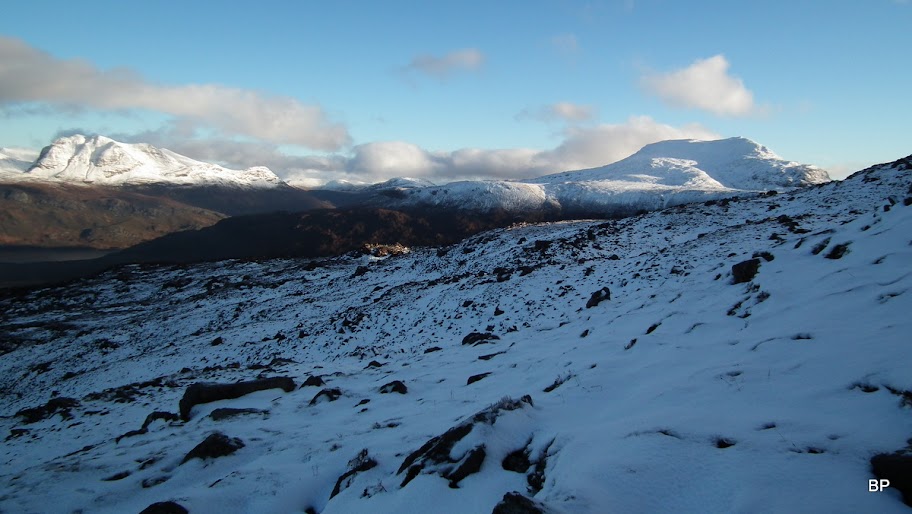 Up the first of a few steeper sections and we stopped again, for the vistas were breathtaking. Not even the cold and the deep snow could wipe a Cheshire cat smile from my face! 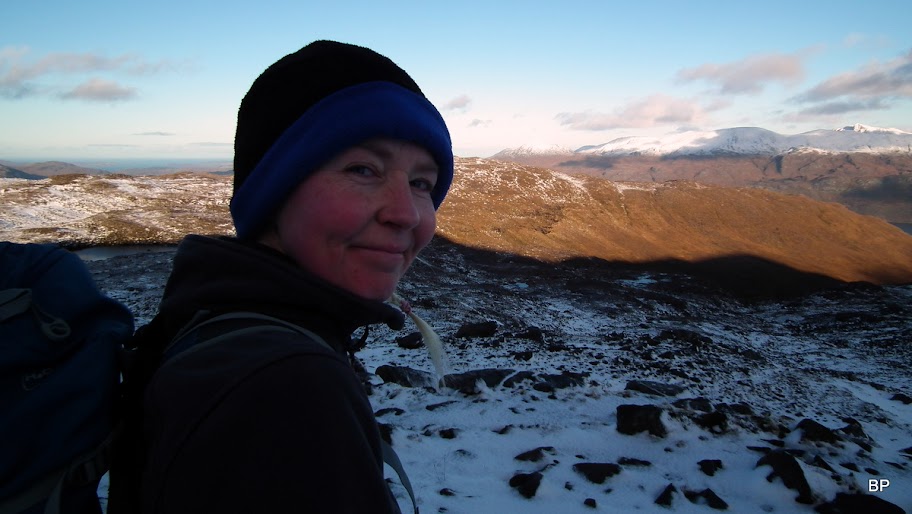 We carried crampons but the snow was so soft there was no point in putting them on. We managed to find our way up somehow 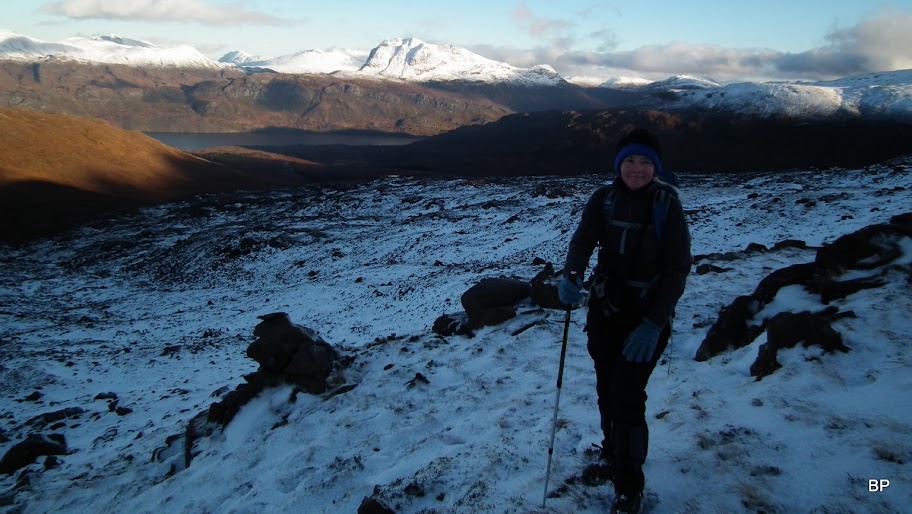 I circled a large boulder and suddenly - bang - here it was, the mighty Coire MF, still topped with cloud: 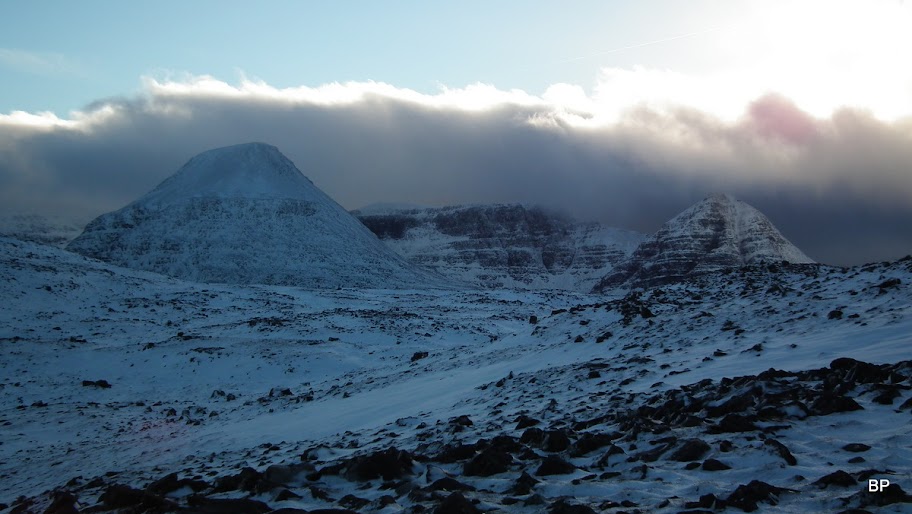 A break for some filming, please! Behind me, Beinn an Eoin emerging:

One more zoom to mighty Slioch: 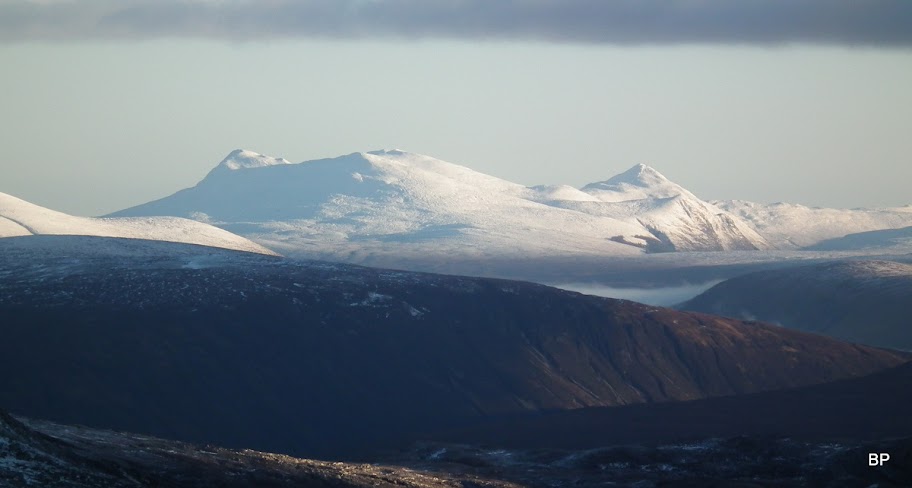 The wind was picking up so we had to push to keep our bodies warm. We were ascending another steeper section, when Kevin sunk in snow up to his thigh and got stuck hehehehe. I had to climb around him and pull him out of the hole.

He was never in any serious danger of course, but snow went through his gaiters and into his boots. Aah the beauty of winter climbing! Brrrr!
On the top of the second steeper part we discovered, we were not yet on the summit, but still about half a km away plus one more steeper slope with snowdrifts to avoid. Such is the nature of Beinn a'Chearcaill, you may think you're there but not yet, my darling, not yet!
At least, Corrie MF looked spectacular! The cloud was lifting:

Liathach never cleared fully, but what we saw of it was enough (gulp):

Can't resist one more pano to Slioch and the Fannichs, though most of the latter are not visible

We pushed through snowdrifts to the summit area which is wide and flat, with lots of scattered small boulders. The Beinn Eighe pano from here is even more breathtaking, we spent some time snapping photos and taking videos till our fingers went numb...
Ohhh, you're such a beauty, Eighe... 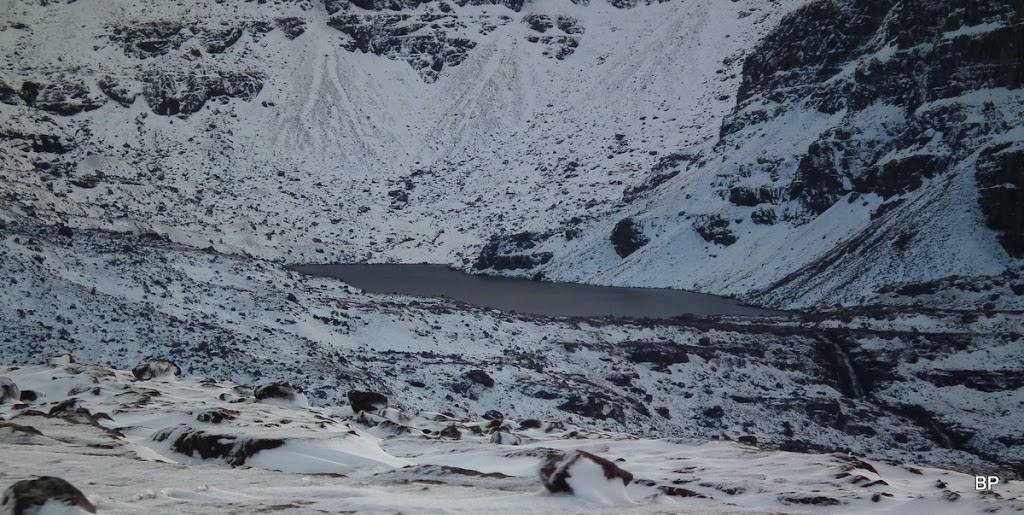 One more pano... (I know... Too much of that can cause heart attack!

This one should be called: "The Liathach Miracle"... 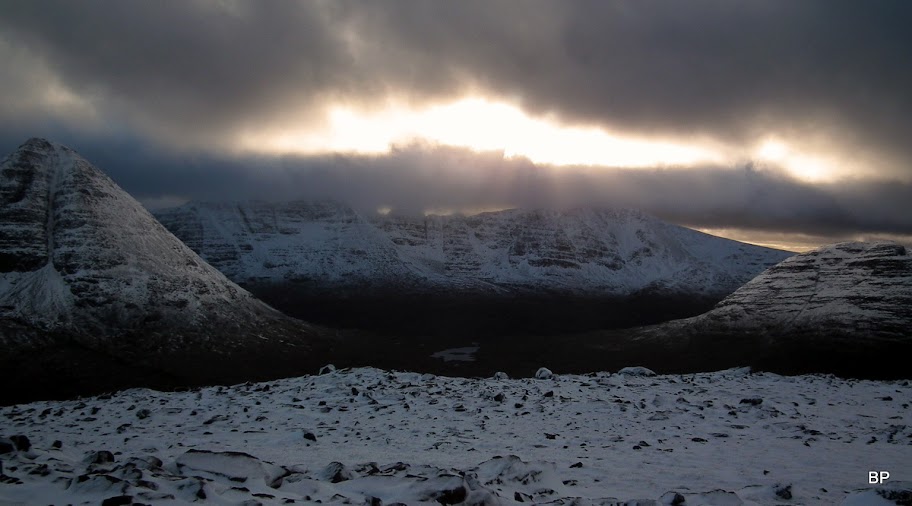 It was very windy now and we pulled on every possible extra layer, including waterproof coats, just to stay warm and spend a few more minutes in this unbelievable place.

Beinn a'Chearcaill is a great viewpoint in every direction and even though the western sky was partially covered in dark cloud, it was still a wonderful way to celebrate Christmas!
Panoramic view of Beinn Dearg (The F@#% Corbett behind Liathach) and Beinn Alligin (Kevins fav Munro):

It's a cold world up there... with views to Beinn an Eoin: 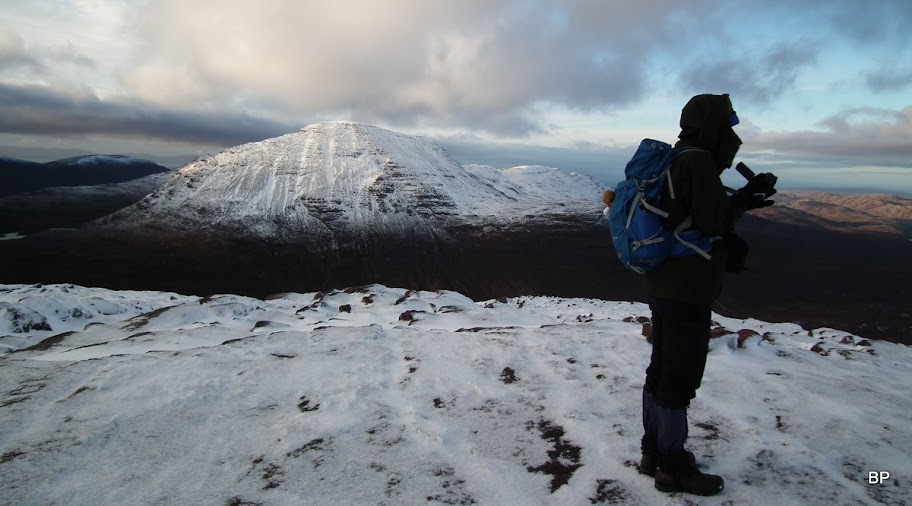 Graham No. 41 and the last hill climbed in 2015. Total classified summits climbed this year: 71 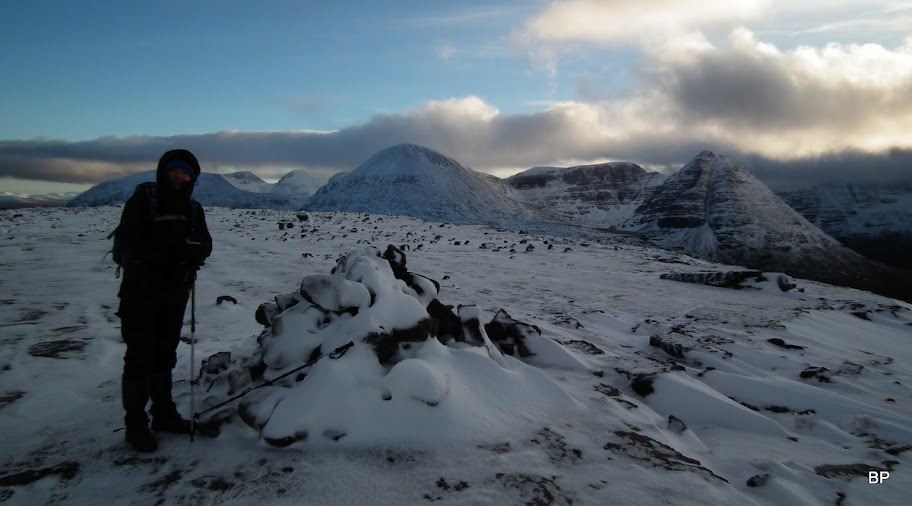 It was so bitterly cold and windy that I didn't even bother to detach poor Lucy from my rucksack for her traditional summit cairn pose, but she still counted the hill as climbed, her 7th Graham.
Wish we could spend more time on the top but I could hardly feel my fingers

We descended a bit and found a sheltered spot for a quick warming cup of tea, then continued our retreat back to the boggy path. We took a slightly different line of descent on the middle steeper section to avoid the spot where Kevin got stuck in the snow earlier. It still took time and effort on fresh, soft snow. Later, when we reached the top of Coire Briste, we had to refresh our mud balancing skills for the slippery path

An unforgettable end to our 2015 mountain adventures. May 2016 be just as good if not better - fingers crossed!

As for Beinn a'Chearcaill, it's definitely underrated. A hidden little gem among the monsters of Torridon, well worth saving for a good day. Views are priceless. I'd love to return here on a longer day and explore the lower tops. The next on the list in this area - Baosbheinn, but that's an expedition for summertime

Can't wait to visit Torridon again, such a magnificent place.

That looked brilliant BP - 2016 will have to be the year I make my debut in Torridon!!

BP
I`m not normally a commenter - but I have to say that many of these pictures are simply beautiful. I love the perspectives of the "Big" mountains from the lesser known ones. You have captured the essence of Torridon in the mid winter absolutely perfectly. These pics are a treat.

Some great pics there, BP; and excellent weather! I somehow had this idea that most of Scotland was under water...

Thanks for the inspiration BP! ...did this one today

Breathtaking, literally, the photo you called "One more zoom to the mighty Slioch" made me gasp. I need to get up there in winter.

What fantastic views! A belated Merry Christmas to you both, a great way to spend it.

We had mud, instead of snow. Not quite the same, but still gets down your gaiters.

This hill has lots of inspiring views, especially Slioch looks great. It's all about location, location. We'll definitely return to this Graham on a longer day and explore all tops.

The lower slopes of Torridons are just as bad as well, as I wrote above. The path up Coire Briste was described to me as "very nice, good underfoot, quick going" in dry conditions. What we encountered looked more like a boggy stream.

We were out on New Years Day, bagged another Graham, a bit easier but still enjoyable - TR to follow soon.

Well done getting out there - fantastic photos of Slioch: meanwhile in Perthshire it's just lessons in Ark building I'm afraid