Leaving Rowardennan carpark at about 9.30 a.m. on a misty cold (-2) New year's eve we jostled for position with a dozen other walkers as we started up the woodland path until everybody had found their own pace and spread out as we reached the cleared forestry area. It was a quiet still day and not cold enough to stop us working up a sweat. Before long we had good, if a slightly hazy view of the clearly defined path all the way back to the Loch, 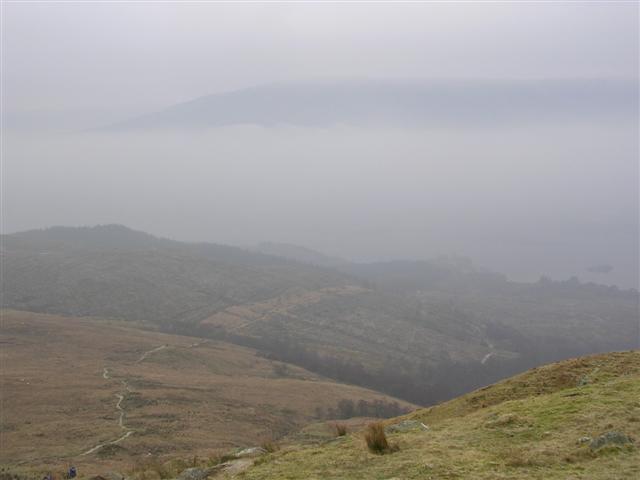 but up ahead the visibility was poorer and now the grass was white with frost and the path icy in places. After a while there was a hint of sunlight breaking through, what I now realised was the cloud layer we had been climbing up into. Then it cleared into a beautiful sunny winters day as we emerged from the cloud. Instantly the view looking over the clouds was spectacular with the tops of other hills breaking through. From here we still had about 40 minutes to the summit, which was quite straight forward apart from some detours round the icy water falls that had formed on the path. Once at the summit we joined a half a dozen other climbers and marvelled at the views including the sighting of a Glory. We had a bite to eat and took some pictures but didn't stay on the summit for long as there was an icy wind preventing us hanging about too long.

We decided to descend via the Ptarmigan route after asking walkers who had ascended this route how it was and they told us it was okay but a little icy so to step carefully. As we started to descend this rather steep rocky path we wished we had ascended this way instead of trying to descend but as we had started and others were following we just had to take a deep breath and carry on whilst treading very carefully to avoid slipping on the icy steps which was a little unnerving as you could clearly see how steep the path dropped away below you. We reached some flatter ground and breathed a sigh of relief and as I looked across at the clouds I saw a fantastic Brocken Spectre, which took on a life of its own as it moved with the drifting mist. From there it was a bit of a trudge through more open boggy ground, which we were glad was frozen and as we emerged from below the cloud we could clearly see our route back down towards the carpark which we reached at 2.30p.m. All in all a fantastic day and a great way to spend the last day of the year.

Great inversion shots, and what a superb day out to finish the year off.

Nice one, looks like real fun on the way down!

Those pictures are immense. Damn, wish I was up there with you on new years eve.