Deep snow on the Wee Buachailles

Deep snow on the Wee Buachailles


This was the trip that nearly didn’t happen.

Glencoe had been in the sights for weeks, but due to the shocking weather it kept getting postponed. Hours spent pouring over weather forecasts didn’t seem to help, I had maps all over the floor planning future adventures. I even went and spent my entire paycheck in Tiso in an attempt at a distraction. But then, finally, following disappointment after disappointment, a window of good weather appeared! Huzzah!!

Setting out in the dark 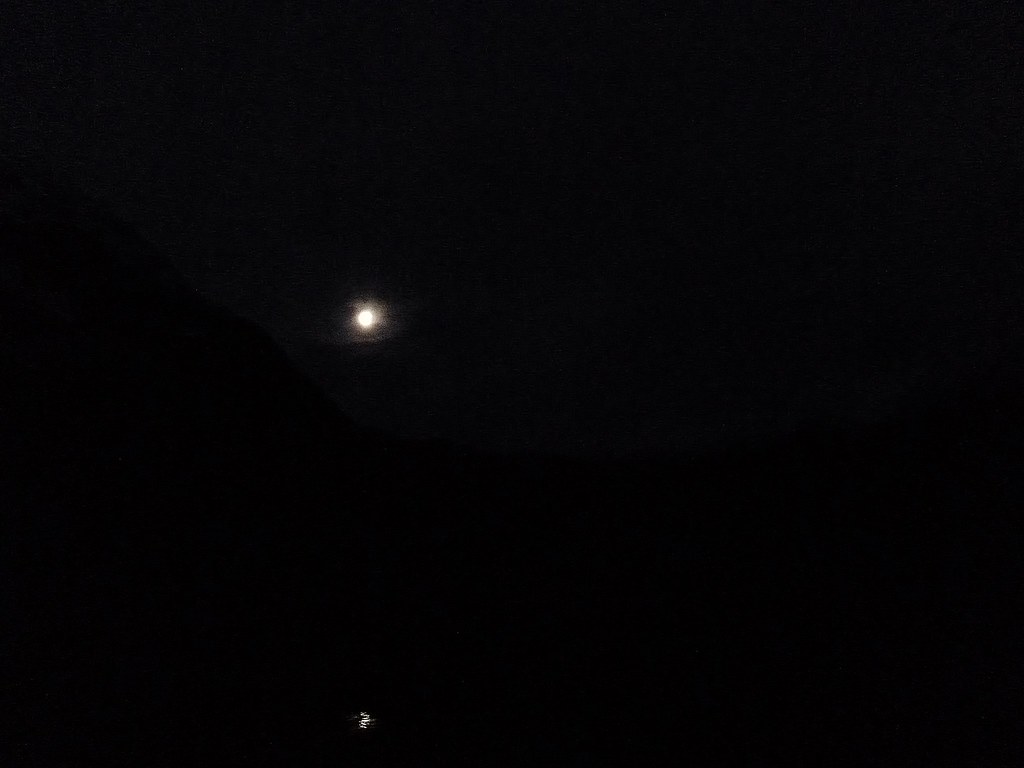 It was still dark, but the skies looked clear and it was fairly mild, so we booted up and set off up the path. To begin with, the path was clear and following it wasn’t a problem despite the darkness. We soon reached plenty of snow, making pathfinding trickier. Due to the mild temperature I was shedding layers pretty quickly and unfortunately the new Rab jacket was saved for later.

Moon poking over the top 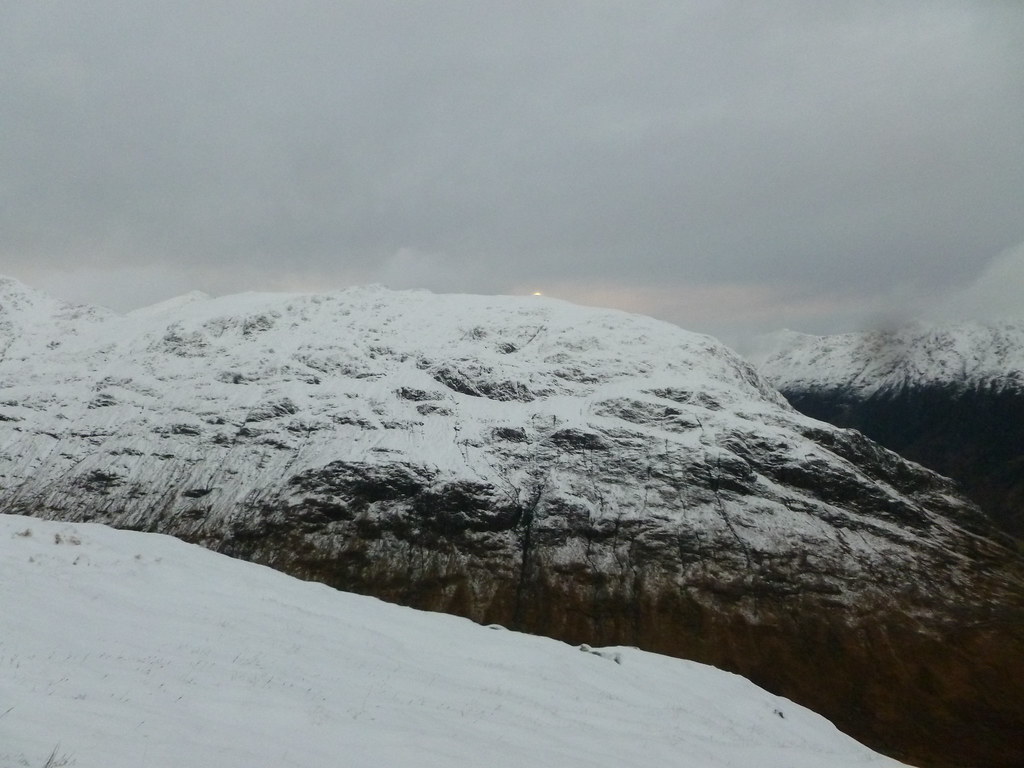 The path is pretty steep and we were soon feeling the effects of boxing day jogging, too many mince pies, copious bottles of wine and early starts. As well as the deep fresh snow. We soon lost the path and made our own, heading for the bealach which was now visible in the morning light. The views were unbelievable, the sun was rising over the mountains creating amazing colours and it was shaping up to be a perfect day. 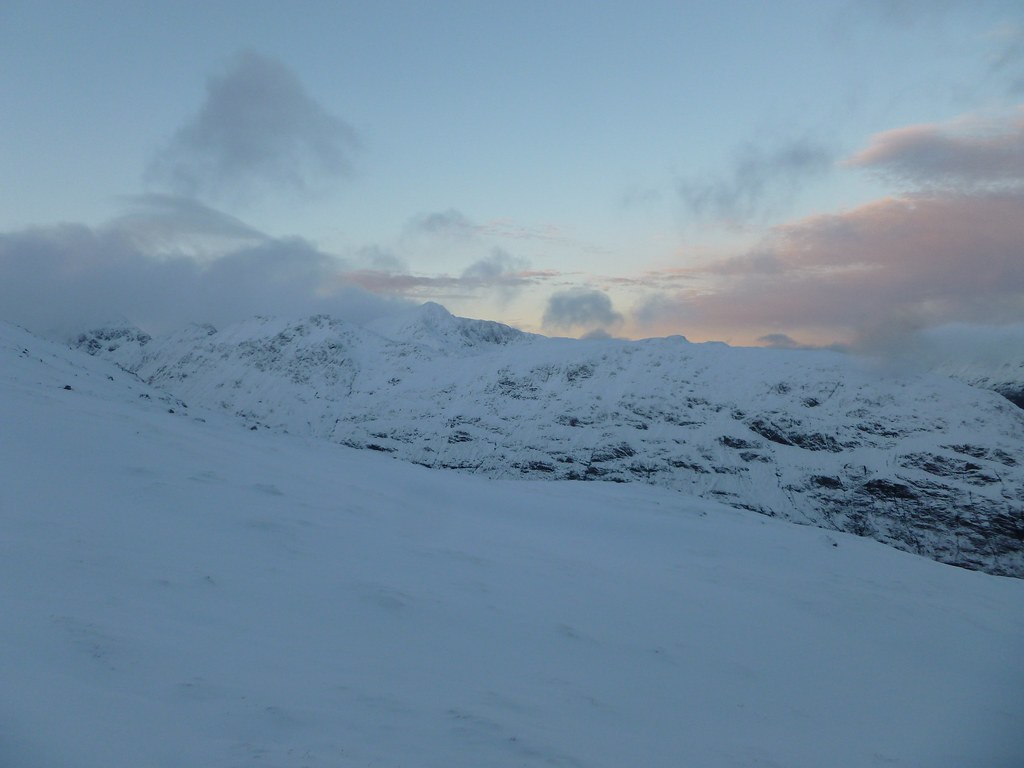 We reached the bealach and were treated to a misty but very impressive view of Buachaille Etive Mor. Bits of it were drifting in and out of visibility and it was stunning. 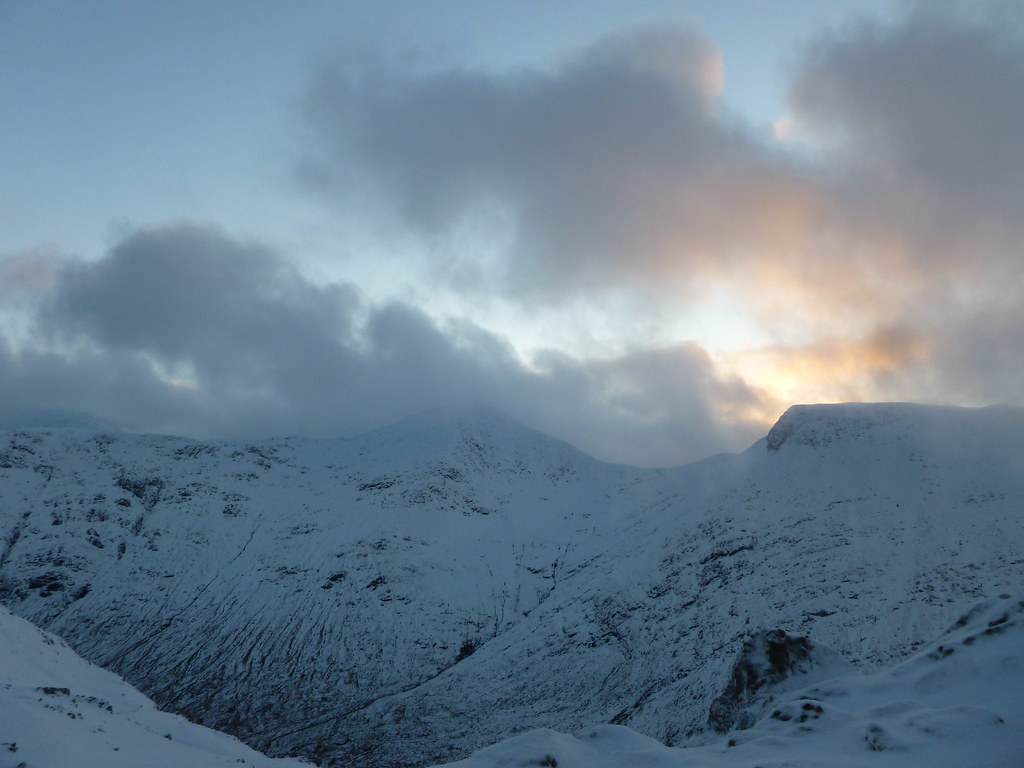 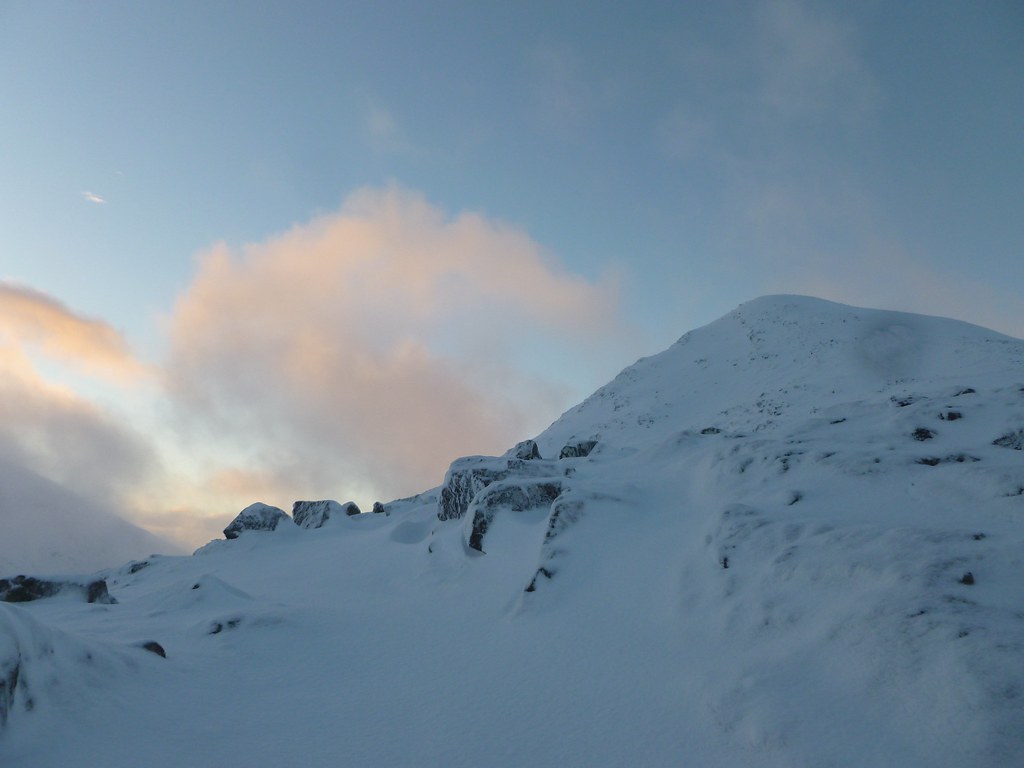 Looking over to Bidean again 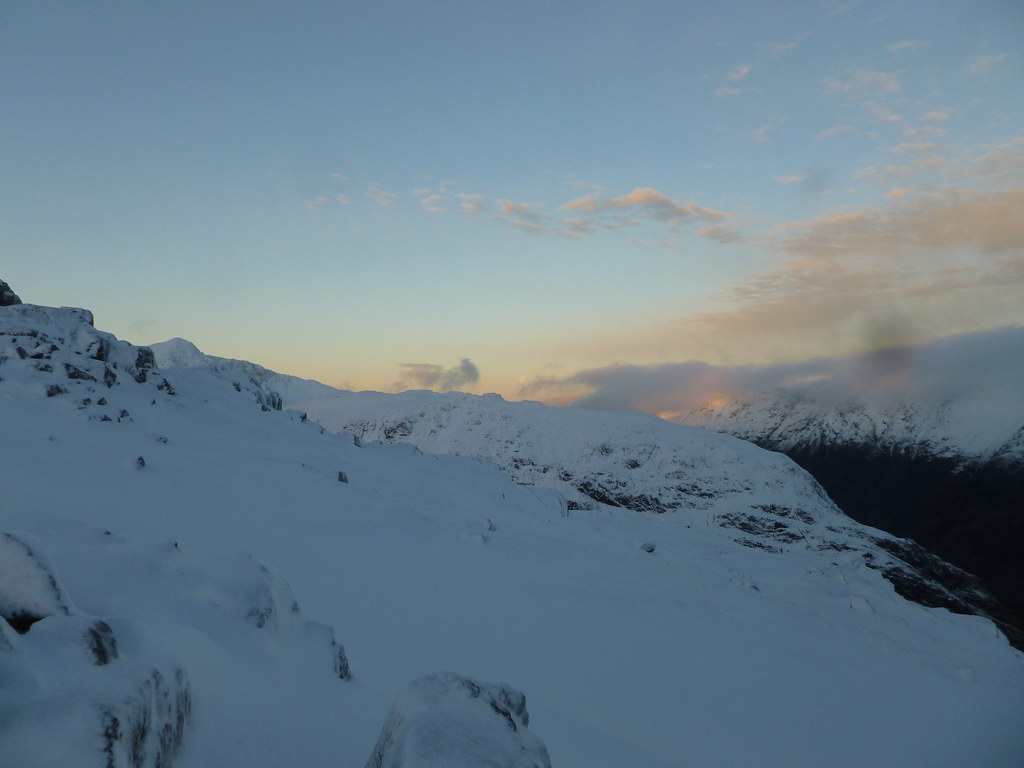 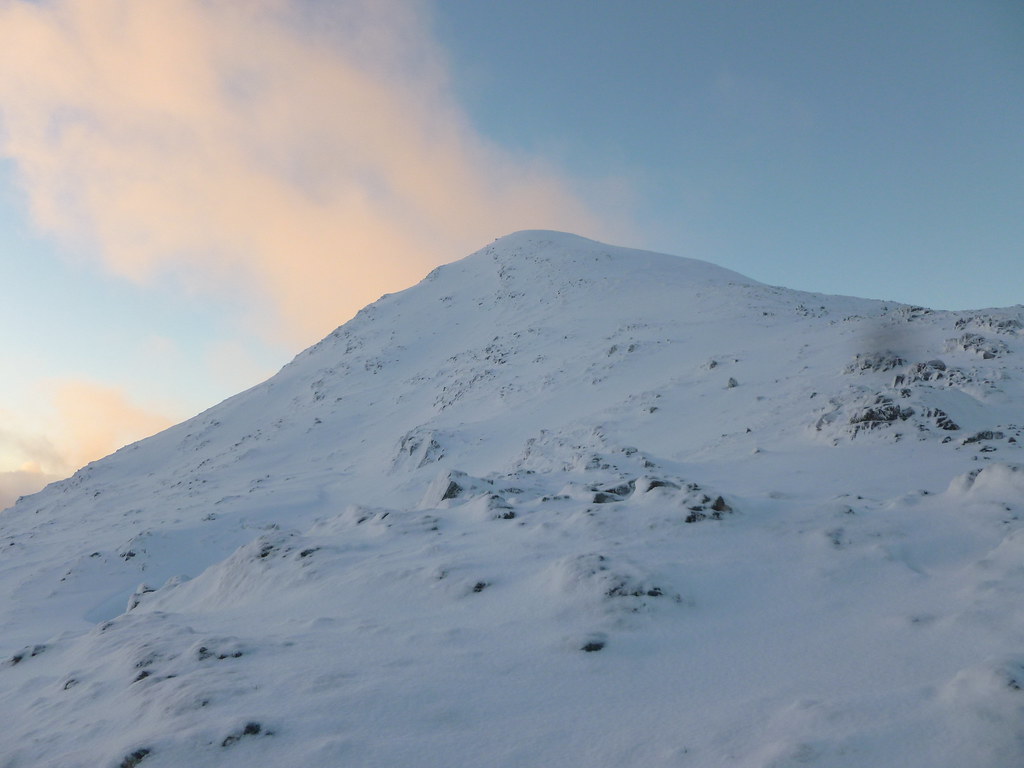 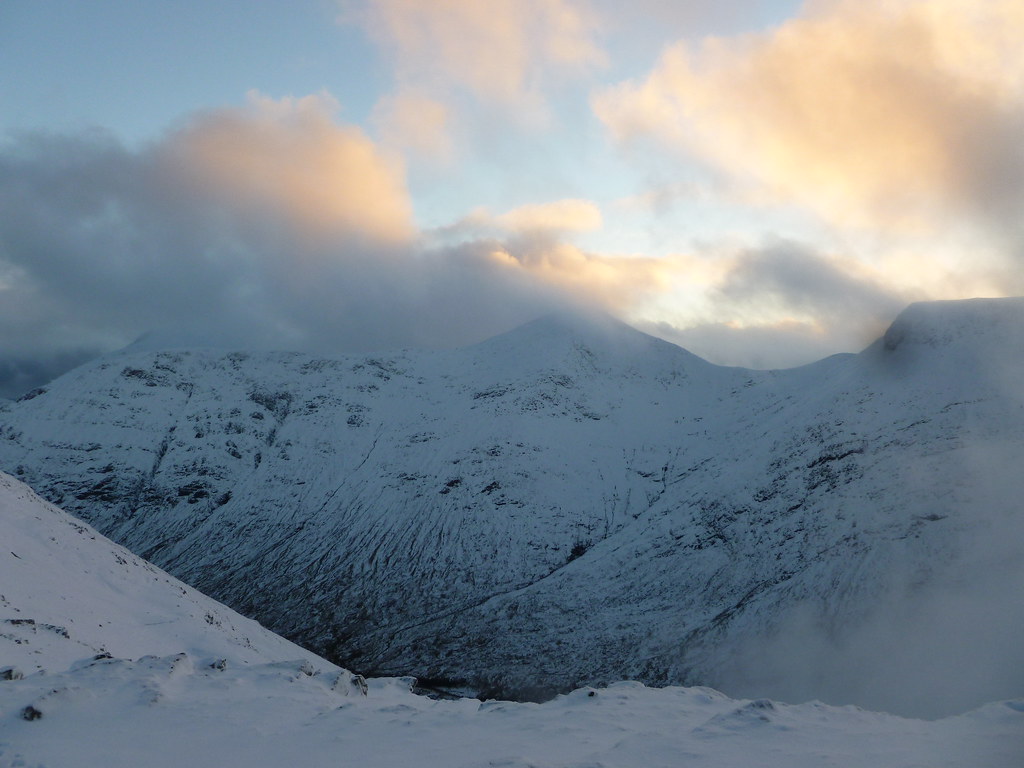 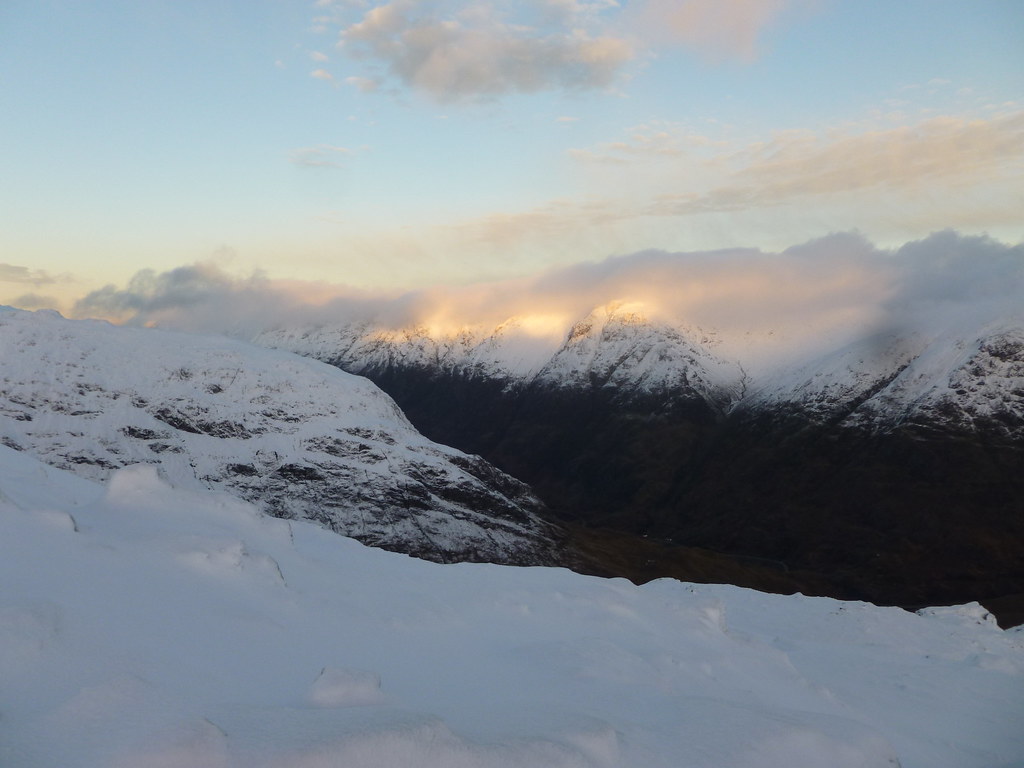 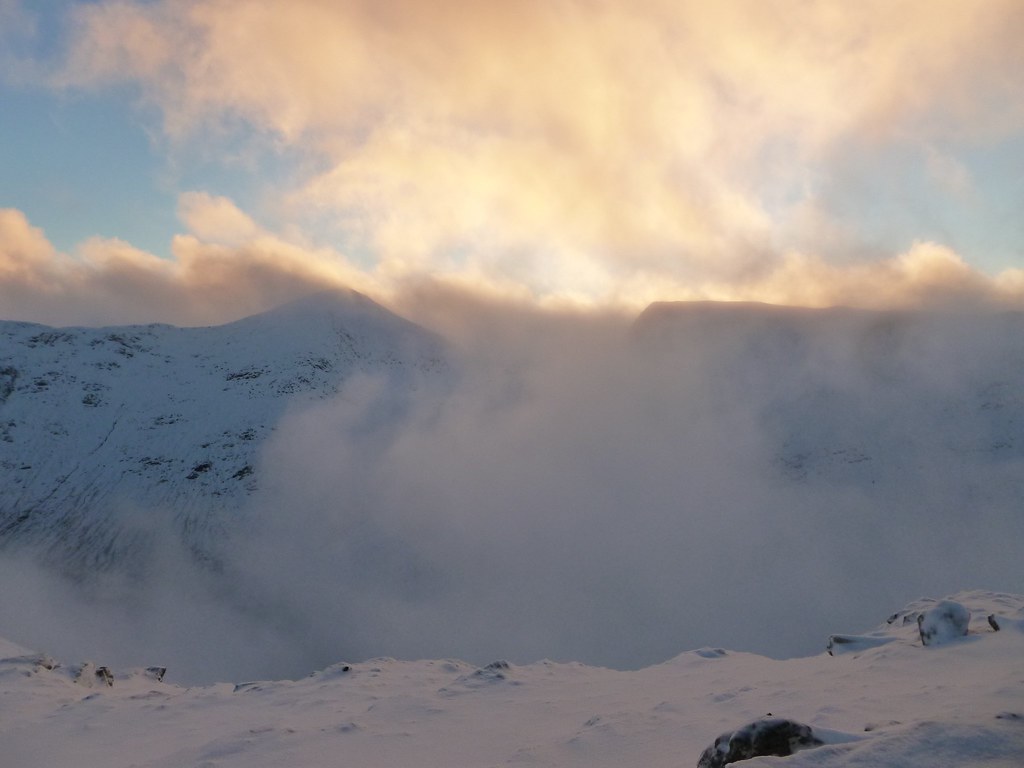 We could see several people coming up behind us, so cracked onwards. We decided to go to the further summit first in case the weather turned (it was forecasted to close in between 12-1ish), so turned right along the ridge and started making our mark in the snow. There’s something very magical about walking across fresh snow, being the first person to step there, and the soft creaking sound your feet make as you sink slightly

Loch Etive before it disappeared into the mist 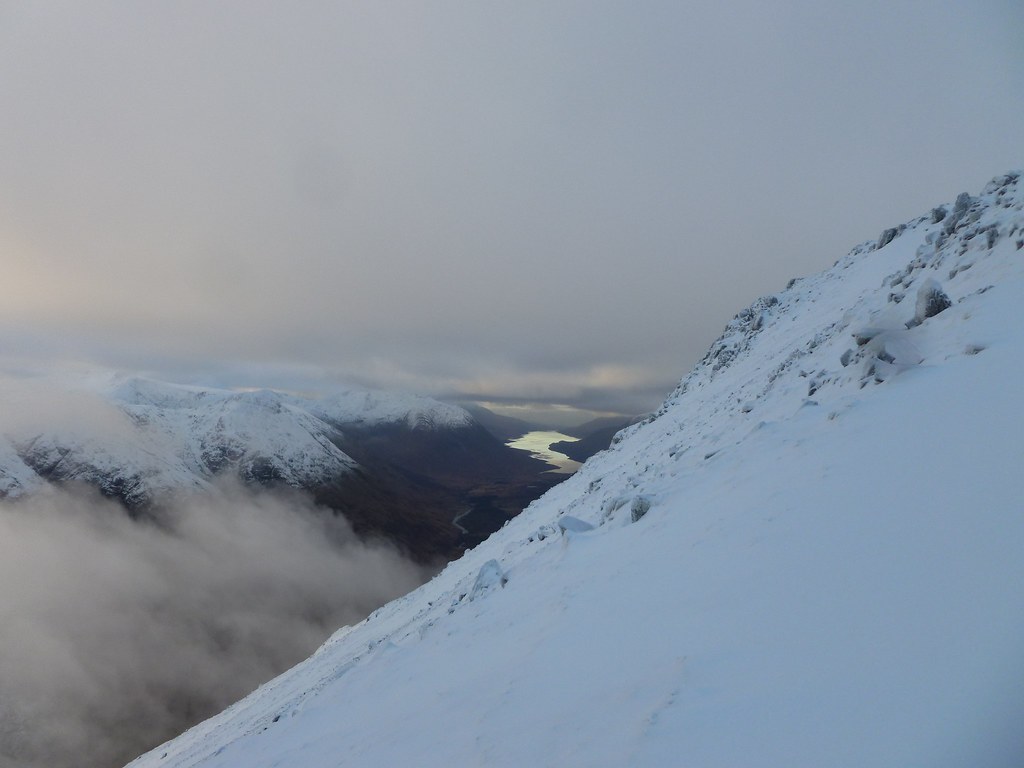 There were a few very steep moment, most noticeably the first ascent from the bealach which was hard work for our tired legs but were rewarded by the views from the top. We could see the ridge narrowing at the final approach to Stob Dubh and it looked very impressive. It was quite rocky on the last wee bit but nothing we couldn’t handle! Summit number 1! The views West had disappeared but further East was stunning. After the obligatory summit posing we headed back down out of the wind which had picked up considerably (meaning the Rab jacket was back on!) 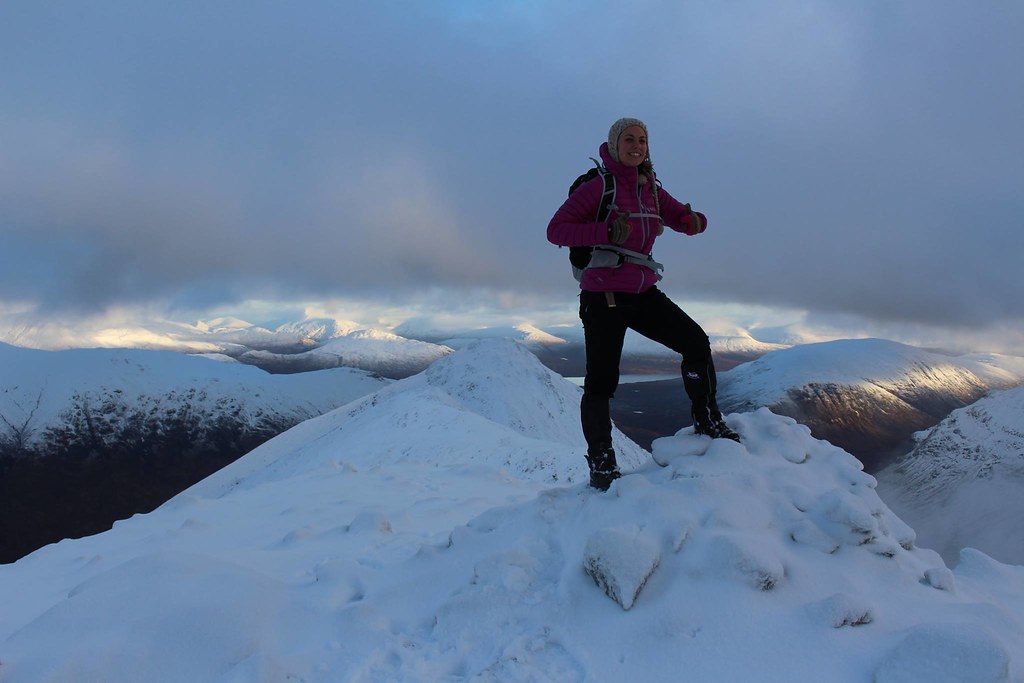 Bidean glinting in the sun 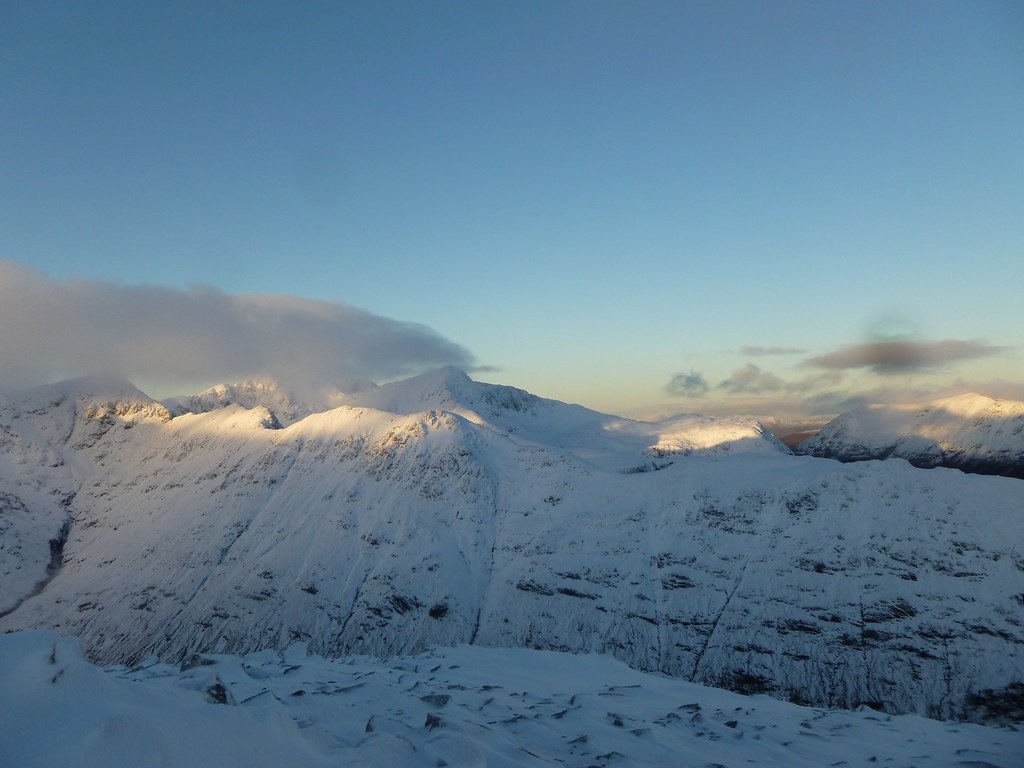 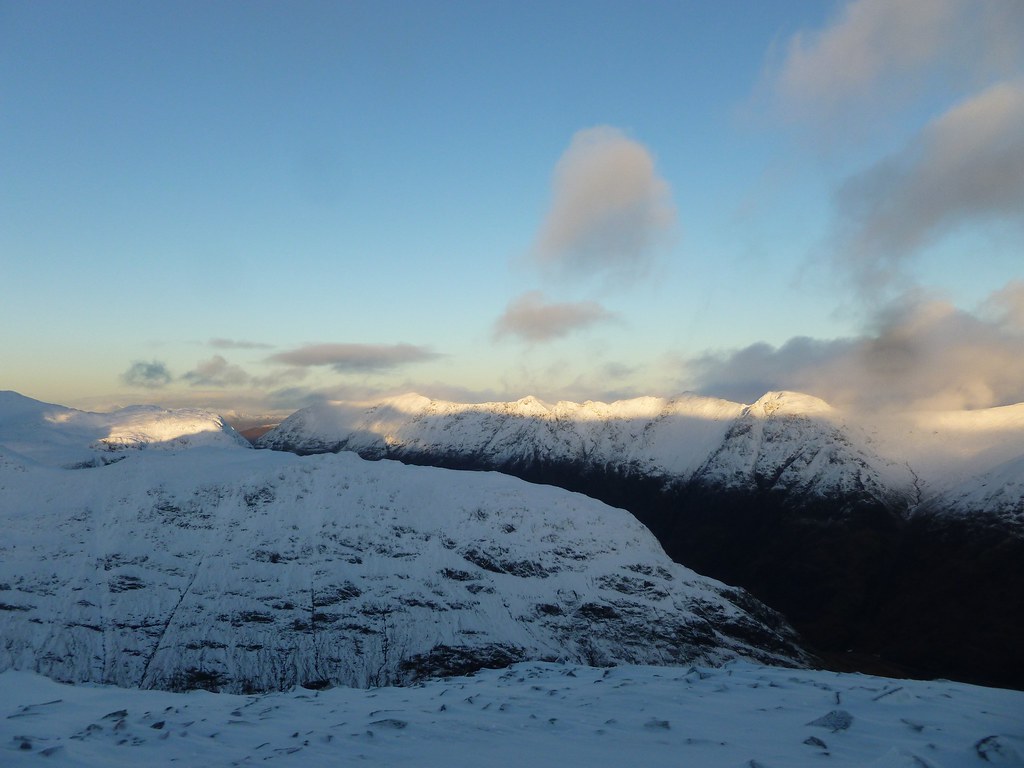 We could see the whole way back down the ridge. 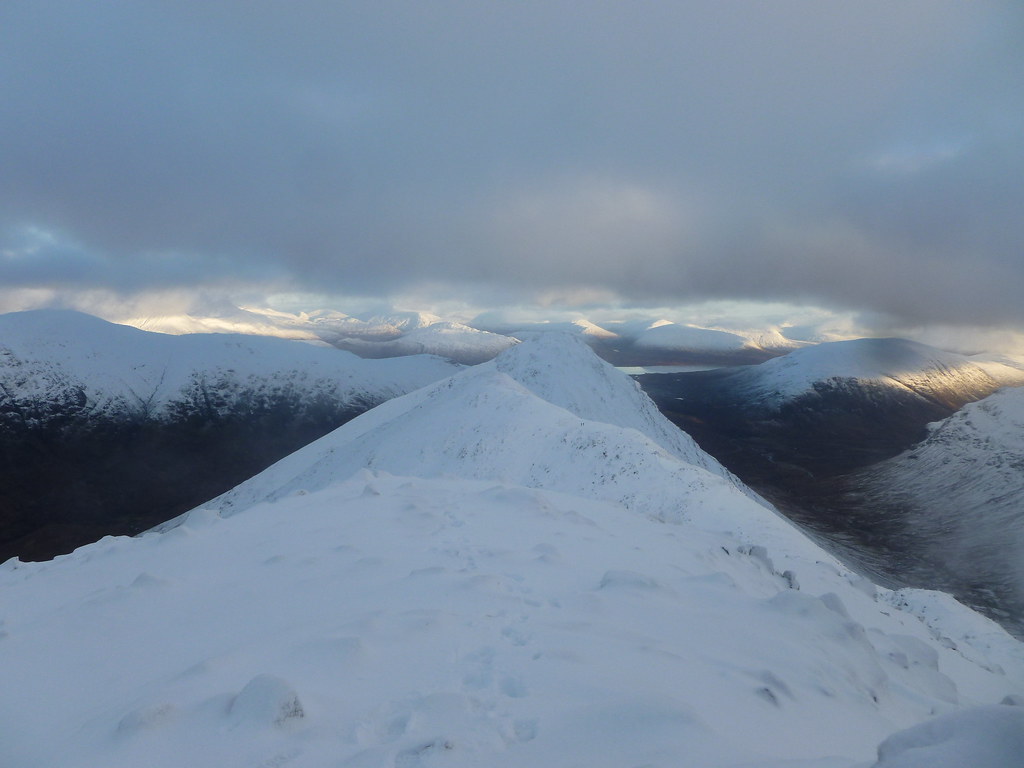 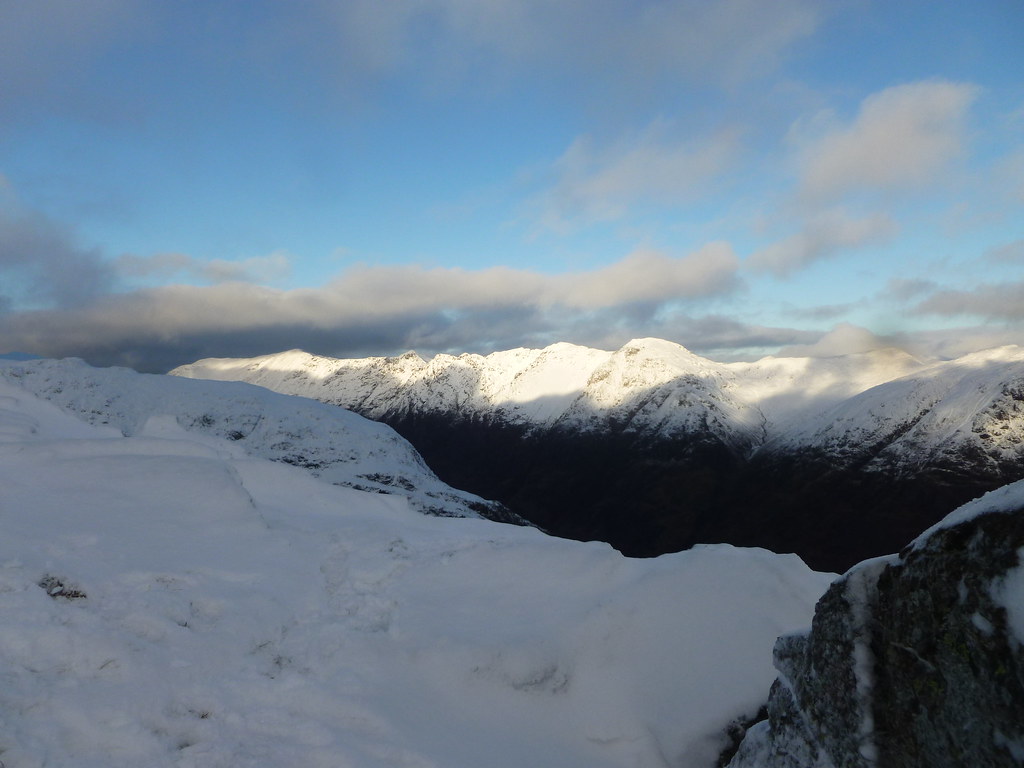 Halfway back we met the people we had seen following us earlier – two guys who said they’d got some great shots of us walking along the ridge. After exchanging Facebook details we cracked on. 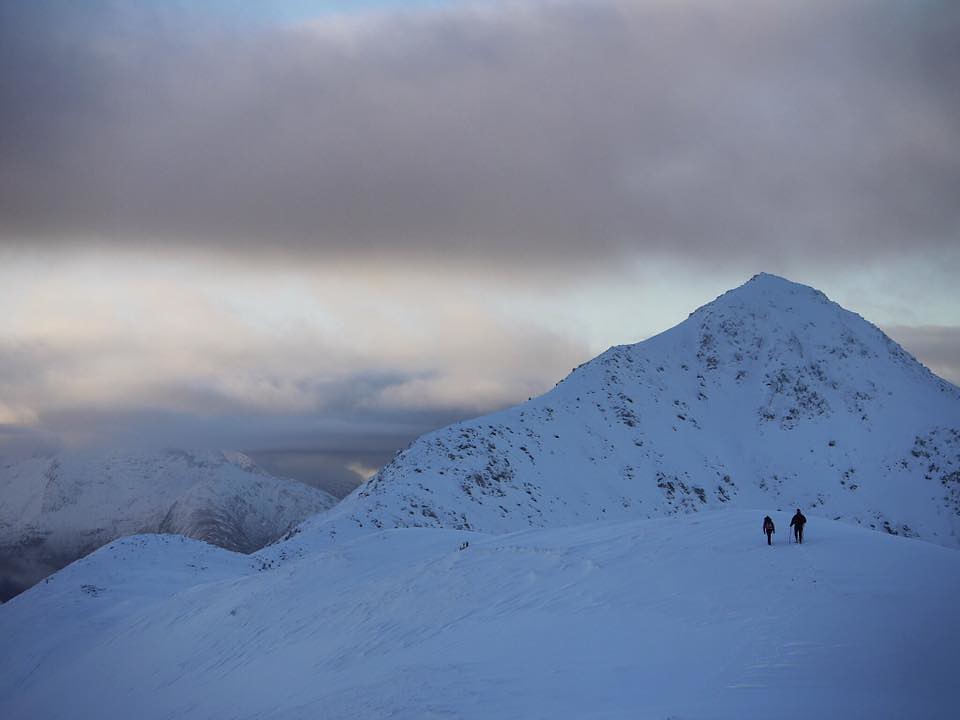 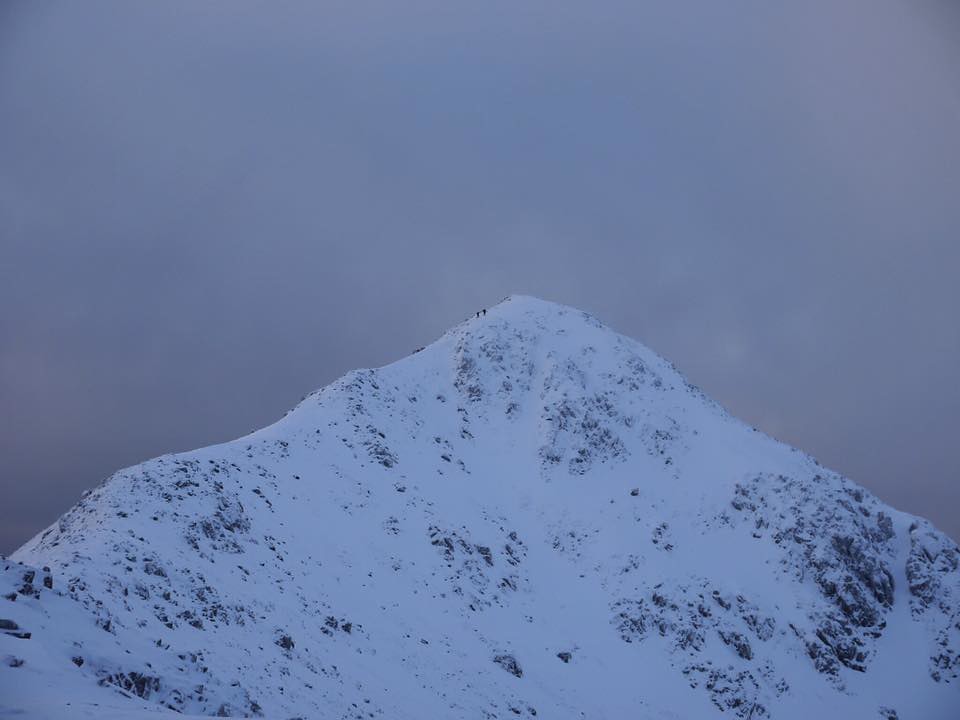 As we started the ascent to Stob Coire Raineach, the weather closed in and, although we couldn’t see our destination any longer, we were treated to some incredibly atmospheric views back the way. Cue scrambling for cameras before it disappeared. 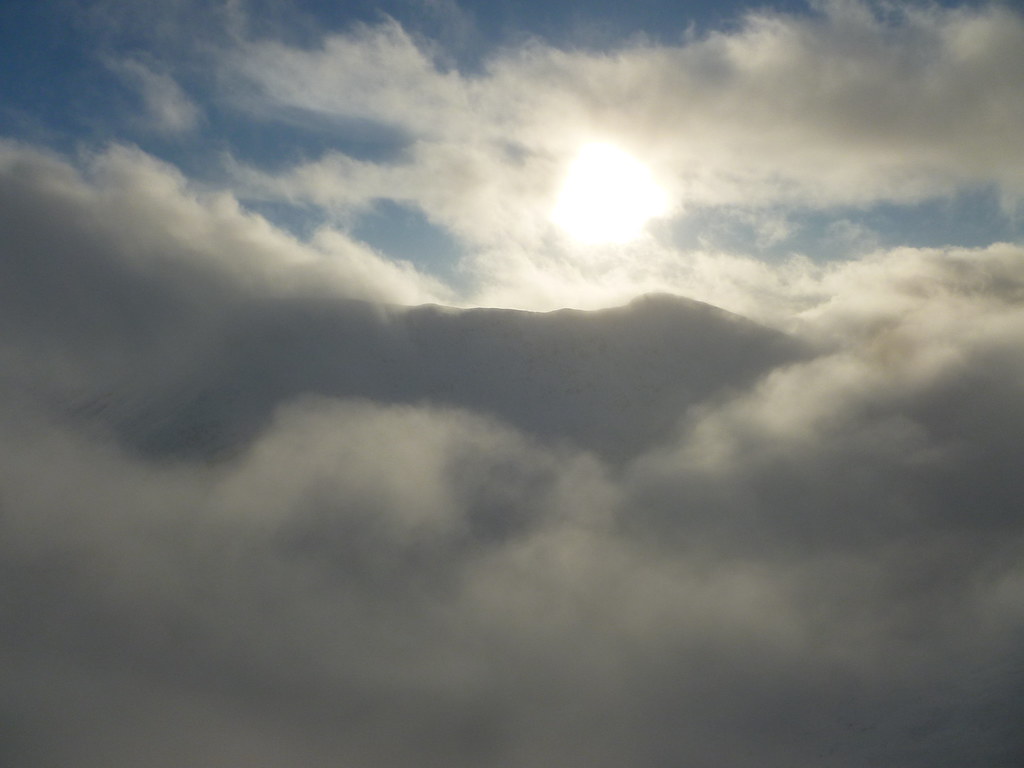 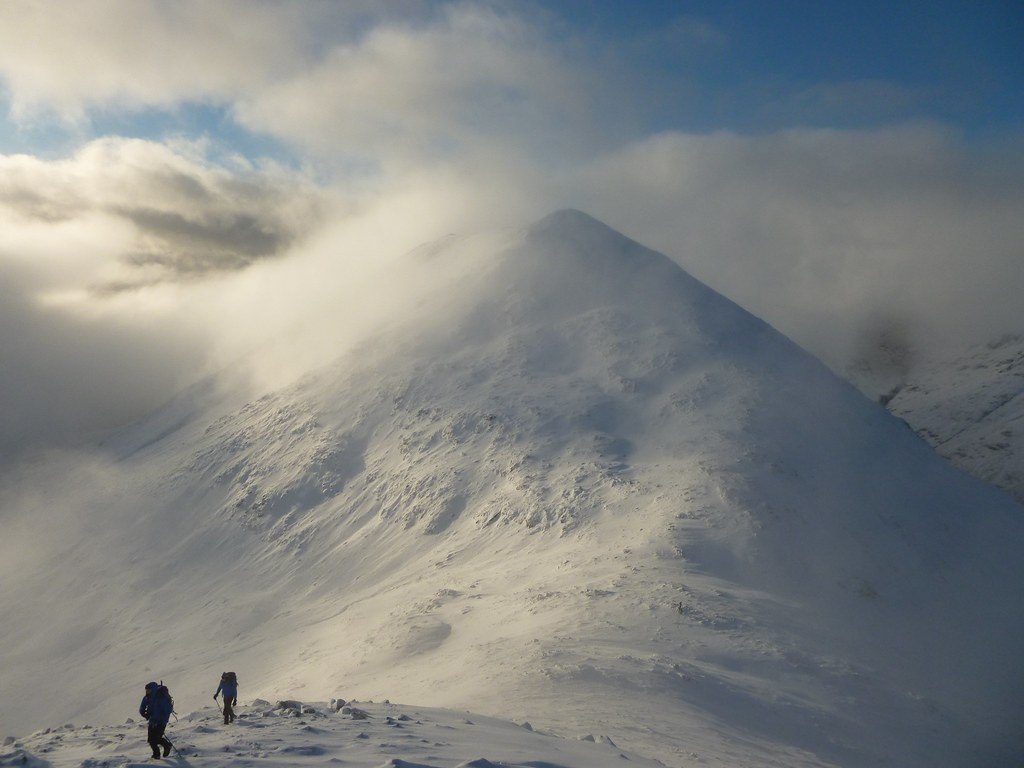 We were back onto deep snow on steep slopes, so it was quite hard going but eventually we got there. Again out came the camera and summit photoshoot commenced. Due to me being completely technologically inept we got pretty cold here, so got moving again.

There was quite a bit of falling over on the way down (probably more on my part, but I definitely wasn’t alone) as the snow was deep and legs were tired. And it was kind of fun too!

Posing in the sunshine 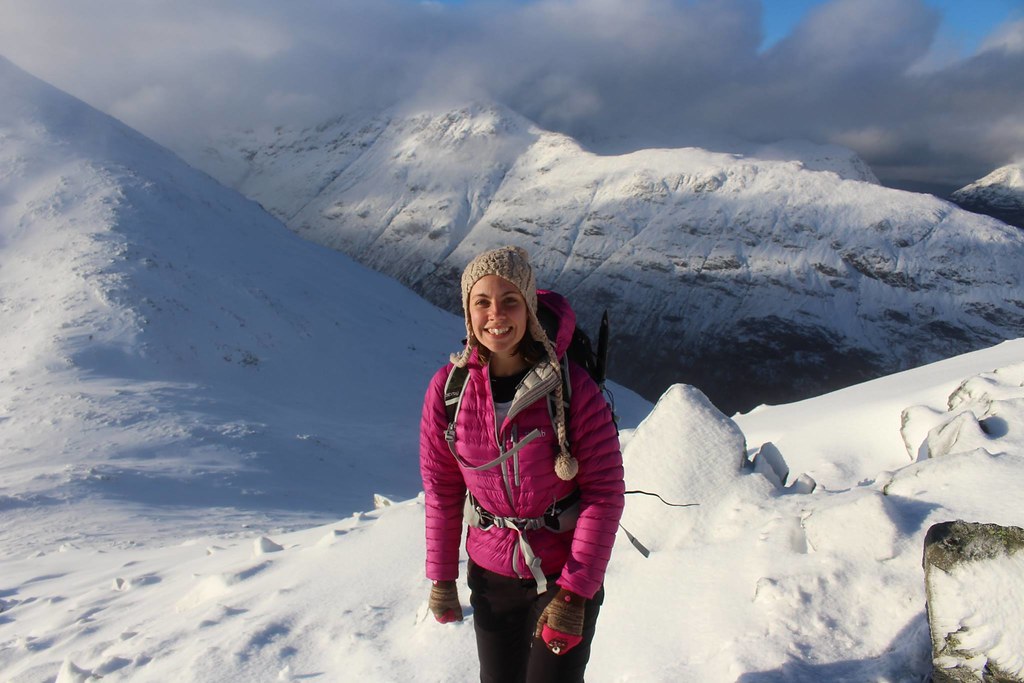 Once past the rocky summit we bypassed the bealach and headed diagonally down towards the path. The path that wasn’t actually the path, but it was the route we had taken on the way up and everyone else had followed. A heavy responsibility! It was well worn in now so was easy to follow, although quite slippery. We were well out of the mist now, and it had mostly cleared anyway so we were snapping away as we came down. The AE ridge looked absolutely stunning, yet terrifying and despite this, oddly compelling. Adding it to my hit list for the next year, we continued on, meeting a fair few people on their way up, obviously making use of the excellent weather window. 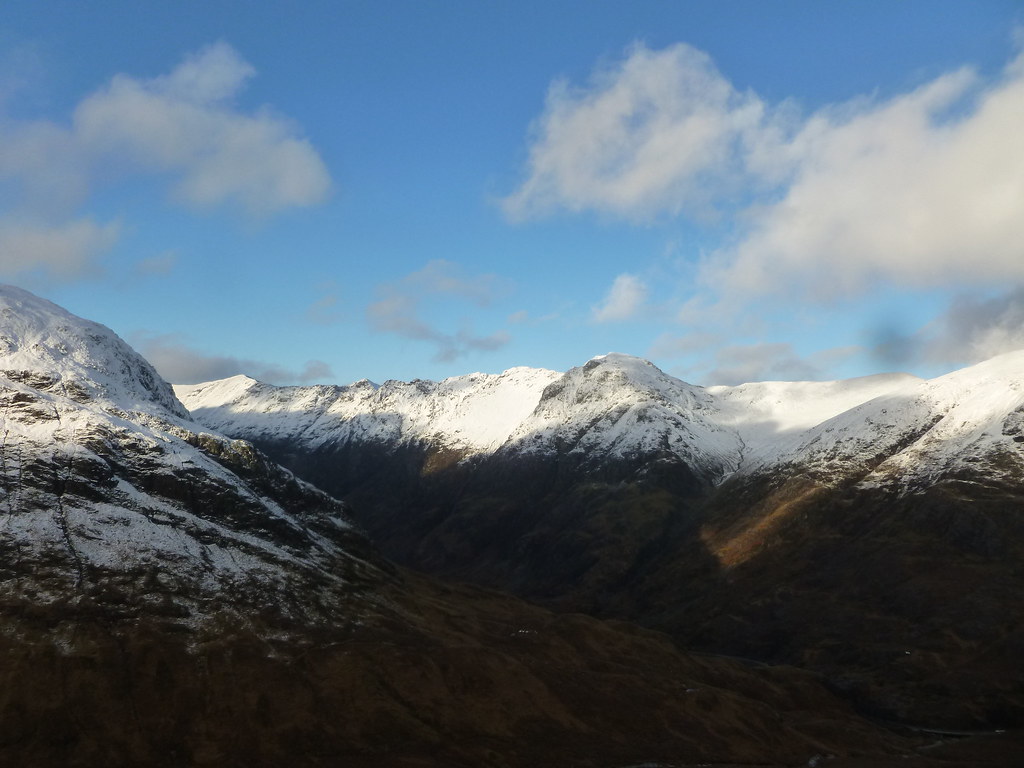 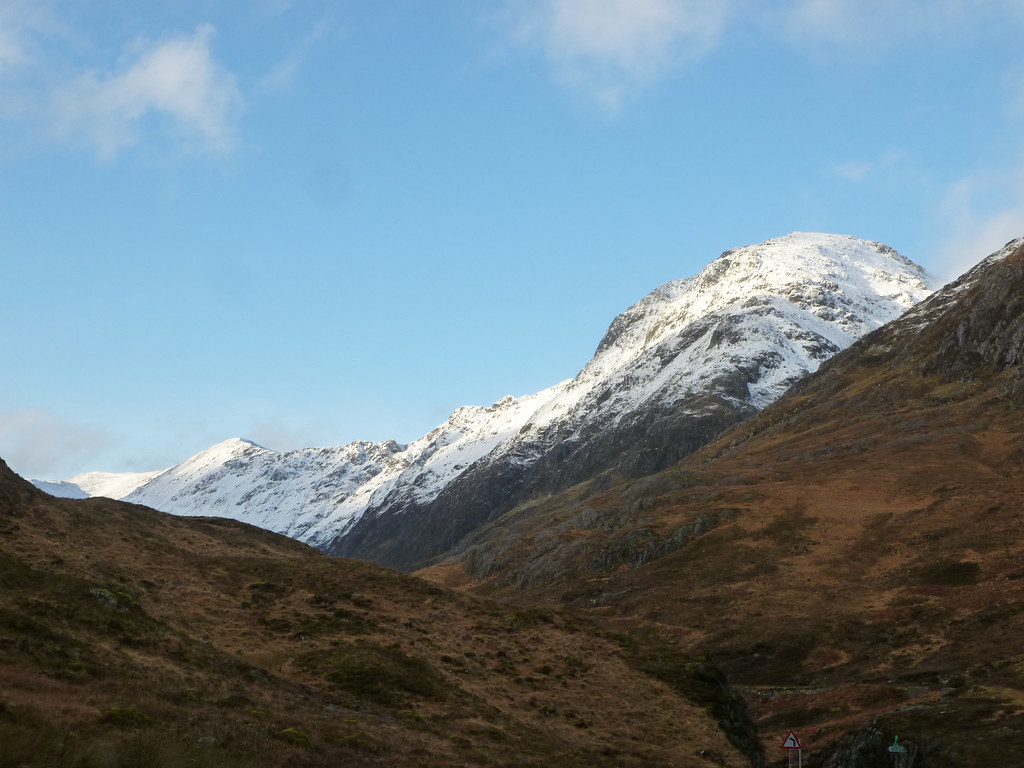 Driving back towards Tyndrum I was able to enjoy the fact that I wasn’t driving for once and enjoyed the amazing views everywhere, without the danger of flying off the road

Early Birds or what

It would have been worth going to the far end of the ridge just for the view up Glen Etive alone, but maybe next time eh. Some lovely photographs to remember your day

That looked a good day out!! I done this hill a couple of months ago but i must have a winter visit.

Well done, cant beat an early start in the dark

Nice report but this photo in particular is superb!

Glad you took that weather window, enjoyed your pics & post.

Great trip report jaxter and some great shots. Well jealous of your "short" drive from Glasgow to bag a hill!

Lovely description of your walk thank you

Hi jaxter and friend looks like you had a great day happy new year scouses are on way to Glencoe Thursday for 10 days on way up going to Finnish lawyers can't wait .

There's not much more tiring than walking in deep snow but it looks like you had great fun in great winter conditions :clap

Thanks everyone - was a great day, remembered all the more because of the pants weather before and since

Nice report but this photo in particular is superb!

guinessman wrote:Great trip report jaxter and some great shots. Well jealous of your "short" drive from Glasgow to bag a hill!

but you're right, I'm so lucky to live so close

jwillo wrote:Hi jaxter and friend looks like you had a great day happy new year scouses are on way to Glencoe Thursday for 10 days on way up going to Finnish lawyers can't wait .

Nice one!! Have a great time! Give me a shout if you're at a loose end

laconic surf wrote:There's not much more tiring than walking in deep snow but it looks like you had great fun in great winter conditions :clap

Yeah, could feel my legs the next day on Chonzie...ouchies

Great report Jackie. Not fussed about the early starts as long as we both get good weather.